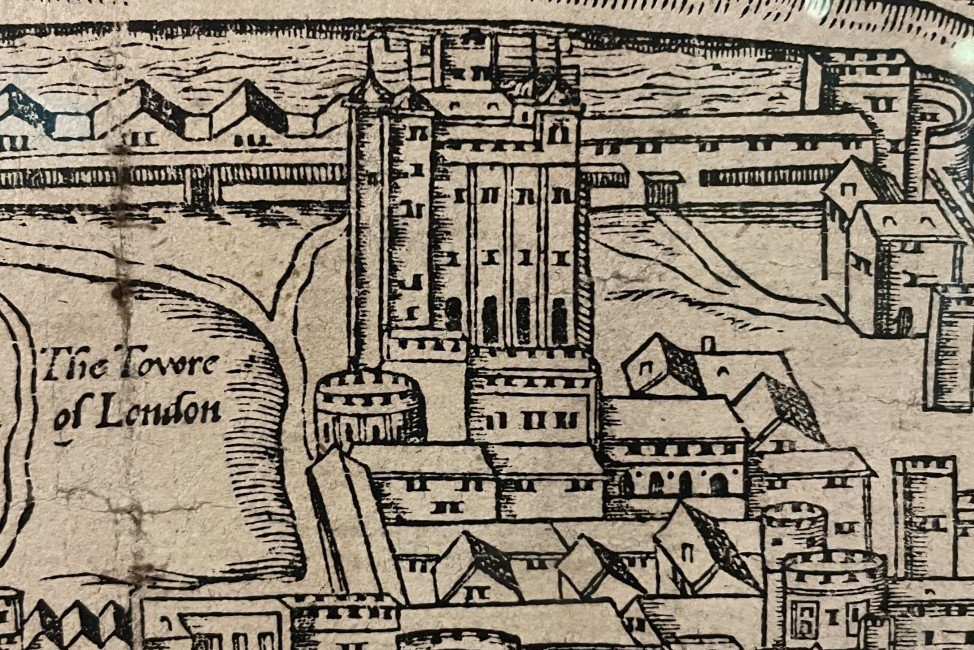 Visit The Oldest Map of London

in City of London, Look Up London, Things to do in London
4 Comments

Until 23 March 2023 The London Metropolitan Archives have a free exhibition of epic London maps.

As if that wasn’t enough to pique my interest, they have on display the oldest surviving map of London.

This is Civitas Londonium, a print dating from c.1633 but which depicts London at some point between 1561 and 1570.

We can judge the date is after 1561 by looking at St Paul’s Cathedral. As it was in 1561 that a freak lightening strike toppled its spire, leaving it with just a tower until the whole thing burnt to the ground in 1666.

Funnily enough there’s actually a reduced London map from 1572 in the exhibition that actually shows St Paul’s with its spire intact!

Back to Civitas Londinium, the original 16th Century map was originally made from 8 engraved wooden blocks, thought to have been based on the copperplate map made in the 1550s.

It’s sometimes also referred to as the Agas Map, from a supposed connection to Ralph Agas, but this is now considered unlikely and the map’s creator remains a mystery.

This is one of only three prints of this map that survive, making it one of the most important items in the London Metropolitan Archive’s collection.

So this got me thinking… If you were headed to London today, with this very out of date map folded in your back pocket, what could you find that survives?

The below isn’t intended as an exhaustive list, but rather a fun checklist of sites that caught my eye during my visit.

Opposite the House of Parliament, by Lambeth Bridge you can still see an impressive collection of Medieval buildings.

It’s unusual to find a circular church in London and the shape is a clue to its age. Based on the Church of the Holy Sepulchre in Jerusalem, this version was built by the Knights Templar in 1185 who organised crusades to the Middle East from their HQ in Temple.

A remarkable amount of this section of the map is vaguely recognisable. Setting in the North West corner of the City, Smithfield (or smooth fields) was a large open space and the high walls of the monastic institutions like Charterhouse and St Bartholomew protected them against the Great Fire of London.

Both St Barts and Charterhouse can be visited today and we talk about them in detail on my Guts and Glory public walk!

You get the impression that they slightly ran out of space on the map for this one. However, what can be appreciated is the South end of Westminster Abbey, today the Henry VII or Lady Chapel.

Built between 1503-12 in the perpendicular Gothic style, it’s probably the work of Robert and William Virtue. The interior is as jaw-dropping as you’d expect.

When I take visitors on a tour of the Tower of London, a common remark is “well, it’s not really a tower, is it?” But originally the 21-tower castle complex was built as one central keep and is today known as the White Tower, built for William the Conqueror and his son (William II) during the 1080s.

And for an extra bit of geeky fun. Here are some landmarks that survive in a sense, but look totally different today…

As discussed above, the Old St Paul’s Cathedral (ie pre-Great Fire) was a mammoth Gothic landmark. Easily the tallest building in London, when it had its spire it was a full 100ft taller than the current St Paul’s!

Today it’s still pretty hard to get far enough away from St Paul’s to capture its entirety in shot but the rebuilt Cathedral was in the English Baroque style, the masterpiece of Christopher Wren and finished c.1711.

This major landmark was erected by the lovesick King Edward I for his dead wife; Eleanor of Castille in the 1290s. You can read more about its history here.

Today a Victorian replica stands outside Charing Cross Station and an Equestrian Statue of King Charles I stands on the site of the original (right beside the official centre of London).

Lastly, here’s a less famous landmark that I thought was interesting…

In Civitas Londinium you can see ‘Holburne Bridge’ across the now-subterranean River Fleet, flowing along today’s Farringdon Road and Farringdon Street.

But you’ll also find the same odd street name right beside it;

A fairly blunt reminder that there’s no way to cross the River here, you’ll have to turn back around and make your way across the bridge!

Visit the Oldest Map of London

The free exhibition runs during the normal opening hours of the London Metropolitan Archive; Monday – Thursday, 10am-4pm (Wednesdays until 6pm). It’s been extended until 29 March 2023. Find out more here.

Pssst. The London Metropolitan Archive is en route of my Clerkenwell walking tour, featured in my London guide book. Read more and order you copy here.