in architecture, Interiors, London, Look Up London, Things to do in London
0 Comments

Mark 21-22 September 2019 in your diary right now. With over 800 buildings open for the public (for free!) it’s Christmas come early for London history fans. Here are my Open House London highlights from 2018.

Less of a ‘tour’ and more of an architecture talk with photos, I was still thrilled to get a waitlist place to visit the new US Embassy in Vauxhall.

It was definitely the most secure of all venues I visited during the weekend, the airport-style security contrasting with the friendly US welcome from staff inside.

As you enter the building proper, the 15m lobby space opens up to reveal another piece of art. This one is by Mark Bradford is called We the People.

Made of 32 panels, the pieces use words from the US Constitution, exploring questions about the transfer of power.

Designed by US Architecture firm Kieran and Timberlake, the building has split opinion. So I was surprised when, after sharing some architectural pictures on twitter, that I was met with almost unanimous disgust at its architecture; “hideous” was a repeated phrase.

I have always liked the ‘outer envelope’ of hi-tech fins. They shield the inside from excess warmth and glare from the glass while at the same time add a pleasant geometric pattern to the ever-growing Nine Elms skyline. The architects weren’t shy about calling it is a “technological marvel … [that] will contribute to the cityscape of London for years ahead”.

They also seemed genuinely passionate about being at the heart of the development of Nine Elms. Whereas Trump dismissed it as a ‘lousy location’, James Timberlake  joked it was the former ‘Wild West of London; South of the River where you gotta be ready to run’. Now they were part of the development turning it into a ‘cool’ place.

But the biggest laugh of the talk came with the discussion of their water feature. “No it’s not a moat” he said firmly. Only half-joking from the continual repeat of this claim. It’s a pond apparently, a reference to our US friends being only across the pond from us.

From one government building to another, this time right in the heart of Westminster, opposite the scaffold-clad Big Ben.

I’ll be honest that the main reason I wanted to visit Portcullis House was to get this shot; the inside oasis under a hemisphere of glass.

But what I discovered was the startling collection of political portraits that decorate the walls. Ranging from relaxed and candid, to aggressive and aloof, famous famous stared out.

Unfortunately photography wasn’t allowed, but having taken this one before I realised, I thought I’d share Gerald Scarfe’s House of Commons (1965);

It’s the chambers on 27 June 1965, the 700th anniversary of Simon de Montfort’s parliament of 1265, the first to include ‘elected’ representatives.

Parliament runs tours, events and is open to visitors throughout the year. For different ways of visiting, read more here.

I’m not ashamed to admit it. I’ve wanted to visit Australia House ever since I found out it was used as Gringotts Wizarding Bank in the Harry Potter films.

The building was designed by A Marshal Mackenzie and Son, a Scottish firm who scooped the commission after winning the design competition. The committee agreed that “this building will be a lasting monument to the importance of the Commonwealth and a splendid addition to the architecture of London.” Constructed 1913-1918, with huge delays due to WWI.

From the outside, the looming facade looks impressive, with huge sculptures and galloping hoofs above. So on the inside I was surprised that it seemed rather cramped comparison.

The Exhibition Hall was grand, sure. But perhaps I just expected more bling?

The real delight though were the staircases.

Who doesn’t love a spiral staircase? 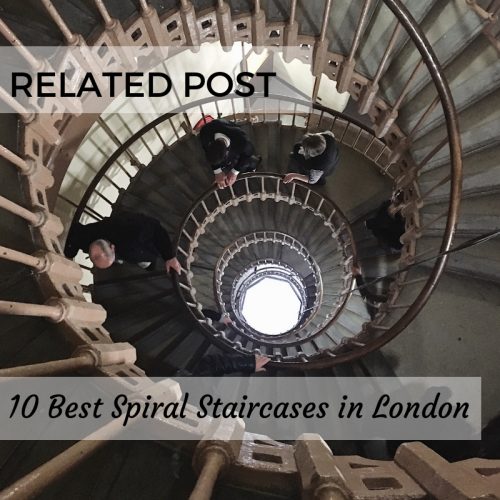 But The Gold Vaults, which in the 1920s held 50% of Australia’s gold reserves, were also quite cool. They’re now empty, now used for general storage.

One of the four great railway hotels, the Great Eastern Hotel outside Liverpool Street was built in the 1890s, but with declining rail travel was closed in 1996.

Today it’s part of the Hyatt brand, completely restyled to reflect their location at the gateway of The City and Shoreditch. One thing they couldn’t alter though, was the grade I listed temple. Found behind a hidden wall of the hotel in 1912;

Covered original Italian marble the room still hosts lodge meetings of freemasons, including an Italian group which visit every 3 months. Sadly, as no freemason was there to give us any more information the rest was left as a mystery, reflected in the company slogan etched above the room which translates as ‘see all, hear all, tell nothing‘.

I finished Saturday feeling a little uneasy, but little did I know that Sunday was going to get even weirder…

Definitely the most curious discovery of my weekend was in Belsize Park.

When I booked a ticket to the UCL Pathology museum – never before opened to the public – I was expecting a few specimens in glass jars.

But this was so brilliantly curated, with guides allowing non-medics like myself, to read more when the explanation of Suppurative Dactylitis left us blank.

A research aide for UCL medical students, the  collection brings to light our ever-changing relationship with health, sickness and death. Sometimes they have evidence of the first recorded cases of diseases, other times they remind us how much (or little) has changed during the last 200 years of medical practice.

The above plaster casts date from the 1870s and 80s, giving realistic, 3D impressions of the effects of rickets, tuberculosis and club foot which were very common at the time.

But more than that it’s a very human display, simple tales of loss and so objectively presented. Like this Trichobezoar, a mass of hair in the stomach of a 3 year old girl. She died from her disordered eating behaviour of swallowing her own hair.

And this other 3 year old child, taken to hospital with severe shortness of breath after playing with family chickens. The post-mortem revealed a single grain of corn in the trachea, looking so tiny and harmless in its glass case.

I left with an overwhelming feeling of awe at medical professionals who can detach the humanity from the job in order to save lives.

Back into Central London I was still on a medical theme, but the setting couldn’t have been more different…

Can you believe this is a hospital chapel?

The Fitzrovia Chapel was originally part of the Middlesex Hospital. That no longer exists, but (thank heavens!) this gorgeous chapel was preserved and restored.

Today the only clue to its medical history is the names of surgeons, doctors and medical benefactors on the walls.

Designed in 1891 by John Loughborough Pearson (and completed 1929 by his son) it’s a smorgasbord of Gothic revival delights. From glittering mosaics to colourful marble and stained glass windows, it’s a literal hidden treasure trove.

Happily it’s open all year round for various events and each Wednesday they host a free open day, 11am-4pm. Find out more here.

Finally, the last stop of Open House 2018 was in Kings Cross.

Home to the Aga Khan University, Foundation & Institute of Ismaili Studies, it describes itself as a centre for education, cultural exchange and insight into Muslim civilisations.

The 10-floor building was designed by the award-winning Japanese architecture firm Maki & Associates and the huge atrium focal point is the floor to ceiling ‘Rhapsody in Four Colours’, 31m of coloured aluminium geometry by Rasheed Araeen.

But the loveliest features of the building have to be the collection of roof gardens, terraces and courtyards. Each inspired by a different Islamic tradition, style and used for different purposes.

The Terrace of Discovery is inspired by the talar, a Persian throne from which congregations are addressed. continuing the theme is a stunning view over the rest of Kings Cross, where the area within a mile radius from the British Museum is now part of the so-called Knowledge Quarter.

In contrast, the Garden of Light is an inward-looking courtyard, designed by Nelson Byrd Woltz. It’s inspired by the courtyard gardens of Andalusia, with patterned screens which the light transforms throughout the day.

Phew! Well done for making it to the end, I hope you now have some inspiring London places to add to your to-do list. What did you get up to this Open House weekend?