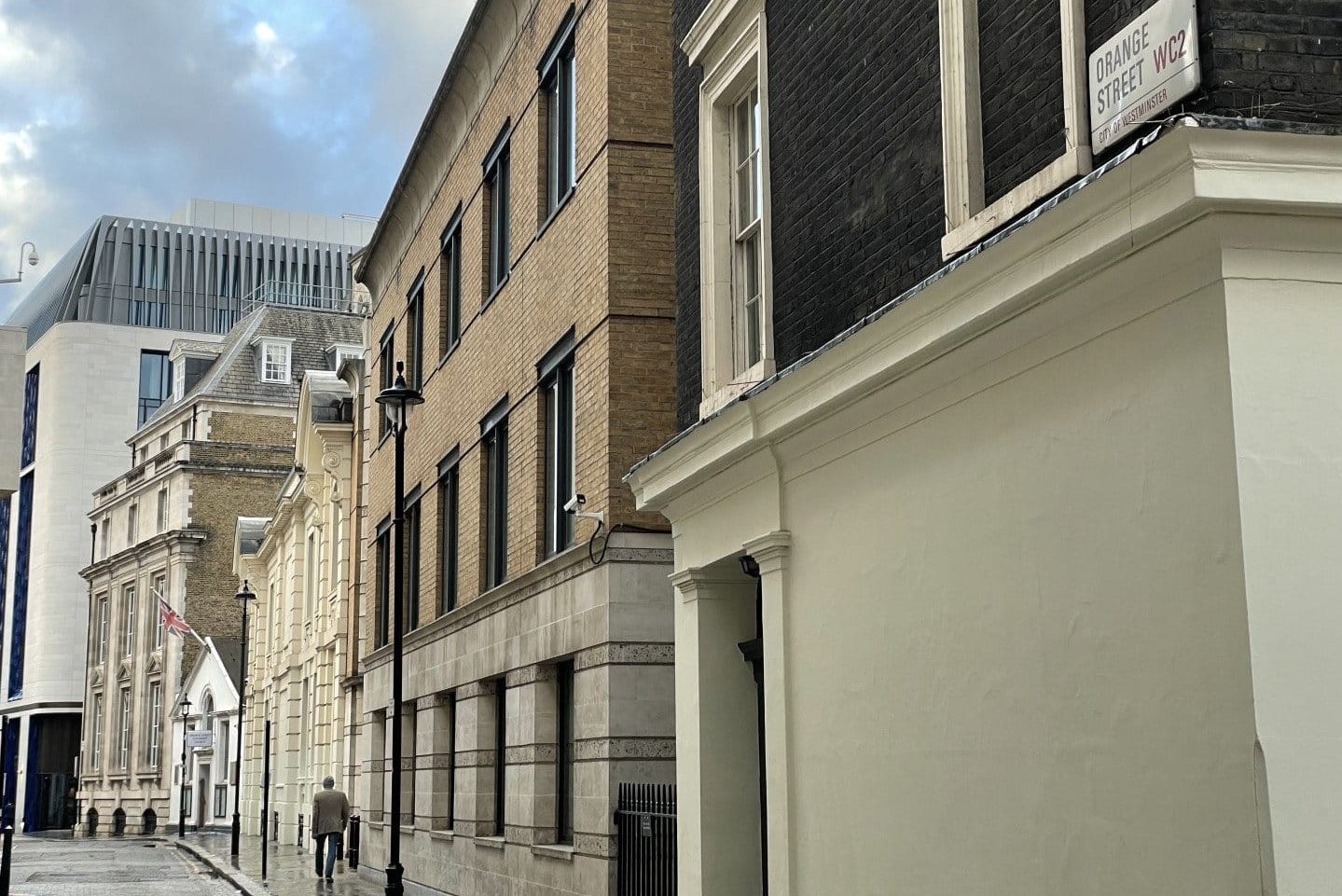 The narrow Westminster street lies between the National Gallery and Leicester Square but there’s a lot more to see than you might guess.

When it was first laid out in 1673 the westernmost section was called James Street, named after King James II (1685-1688) who was deposed by King William III. Out with the old, in with the new, I suppose!

If you look up above no.s 2-8 (now the Z Hotel, Piccadilly) you can spot an original street name.

The development of the street is attributed to Colonel Thomas Panton, a curious figure who is buried in Westminster Abbey and who gives his name to the adjacent Panton Street.

He served in the Household Cavalry under King Charles II then moved into the foot guards but resigned because he converted to Catholicism.

He was also a big gambler but supposedly won so much money one night that he never played again. He had a mansion on Haymarket which explains the local development including Orange Street. He died in 1865.

Back to Z Hotel on Orange Street, these buildings once stood on something rather interesting, a Tennis Court.

It was based here from the mid 1600s until it was demolished in 1866. It would’ve been a ‘real’ tennis court (with similarities to squash today) established as a favourite Royal sport in the 16thC. You can visit a court within Hampton Court.

You can see an external view of the Orange Street courts here and apparently for a number of decades from 1800 it was considered the headquarters of the game in England!

Opposite is a grand Edwardian facade worthy of a mention.

However, faded markings above the shop windows reveal it was once Burberry’s flagship.

There was also once a fabulous clock that hung over Haymarket but I’m not sure whats happened to it now.

Continuing along Orange Street, we reach the junction with Whitcomb Street, where James Street ended. Below is a map (John Rocque, 1746) showing Orange Street in its three original parts.

And a contemporary map showing Orange Street today where you can appreciate the proximity to Leicester Square and Trafalgar Square.

If you glance right down Whitcomb Street you can spot the wonderful heritage sign of a dairy at no.25.

Today it’s home to Sandwich Express and Excel Court, private flats which have some rather lovely decorative gates.

Back to Orange Street, on the northeast corner is now The Londoner hotel which replaced a charming Victorian pub; The Hand and Racquet – presumably a reference to the nearby tennis courts – built 1865.

You can see photos of the lost pub here.

As we continue east along Orange street, we enter the former Blue Cross Street and get a view of a small church.

Today this is a 1920s building housing the Orange Street Covenant Church but this stands on the site of a Huguenot Chapel, established in 1693.

You can see a 19th century interior photograph of the former chapel on page 10 of this digital copy of this book.

The Chapel survived right up until the outbreak of the First World War when – deemed unsafe by Westminster Council – it was scheduled for demolition.

To give you just two highlights in the church’s lengthy history, firstly between 1736-1753 the minister; Jean Pierre Stehelin, could speak a whooping 17 languages! Reflective of London as a hub of immigrants and melting pot of cultures, these included Hebrew, Greek, Latin, English, French, German, Italian, Danish, Dutch, Armenian, Arabic, Spanish, Portuguese and Welsh.

Secondly, during the 18th century it was the local church to a rather notable neighbour, Isaac Newton who lived in a house on St Martin’s Street from 1710.

Close to Leicester Fields and with this area still being quite rural, he established an observatory on the roof to gaze at the night’s sky!

Sadly the house was demolished around the same time as the chapel, however there is a plaque recalling the past resident.

Londonist has a good article with more about the house and its later residents which you might enjoy.

As you approach the final section of Orange Street there are few historic clues that this street is over 300 years old. However, there is a nice old painted street sign visible just behind the modern Westminster Council one.

So there you go, proof that even on a seemingly ‘boring’ street there’s plenty of history to find when you look up.