Inside the Painted Hall, Greenwich

in architecture, London, South London, Things to do in London
0 Comments

After 2 years (and £8.5million) of restoration, Greenwich’s Painted Hall is open to the public from 23 March.

A Quick History of the Painted Hall

The brainchild of Queen Mary II, The Old Royal Naval College was established in the 17th century as a service to look after retired or sickly naval officers. Basically a sister organisation to the Royal Chelsea Hospital which looked after elderly soldiers.

Architect Christopher Wren had the original plan to create a dining hall with a plain interior, full of natural light. However James Thornhill – a relatively unknown British painter at the time – was commissioned to fill it with murals. 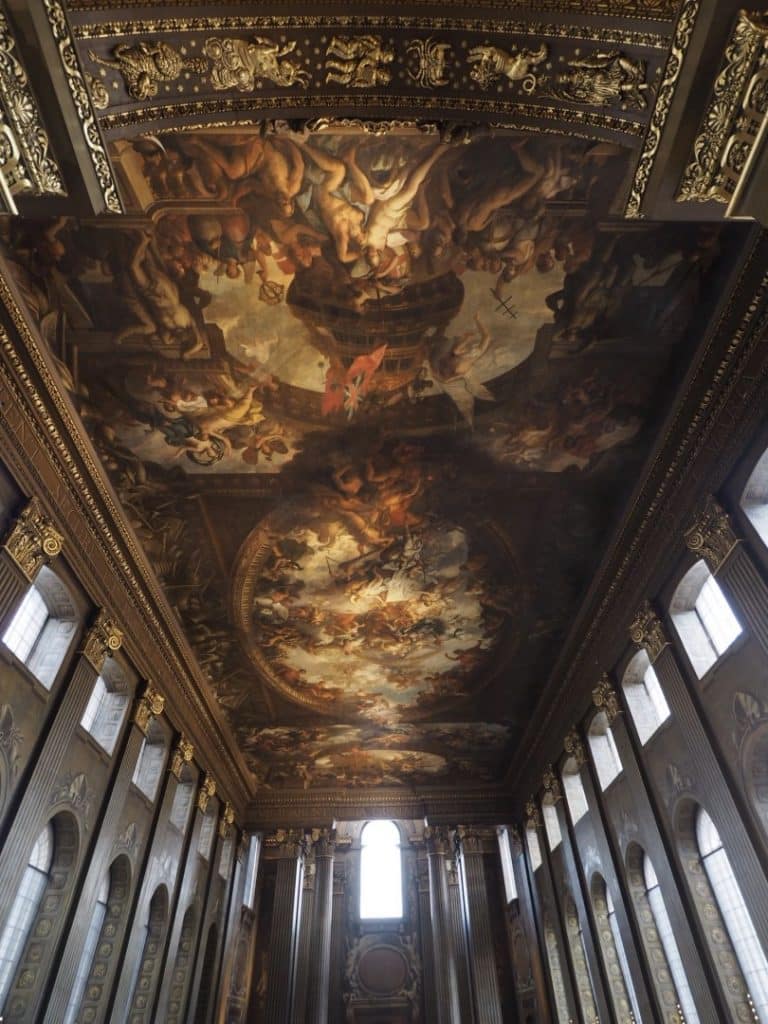 I think it’s fair to say that Thornhill went a tad overboard on the decoration. It took him 19 years and during that time the pensioners ate in the plain, darkened undercroft.

Whether they simply had got used to their arrangements or whether they found the finished product way too intimidating, they opted to stick to their previous eating habits.

So in the end it was used as a tourist attraction, with pensioners being paid threepence to give guided tours to the public. (Today your entrance fee includes an audio guide!)

Look up and you’re transported to late 17th century England. With the threat of Catholicism from James II looming, William III and Mary II – a thoroughly protestant pair – were invited to be our only joint monarchs in 1688.

As William and Mary had no children, her sister Queen Anne took over. When she also didn’t have any surviving heirs the line of succession went to George I of Hanover. 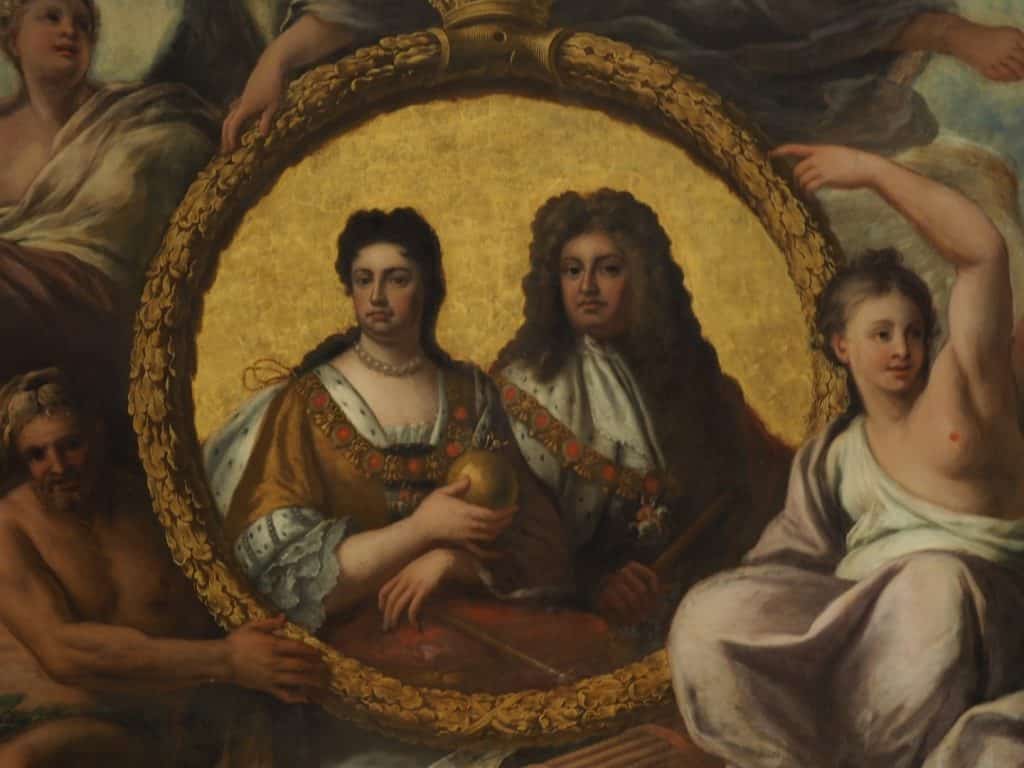 King George I is the seated chap in the middle (below) wearing white and blue. 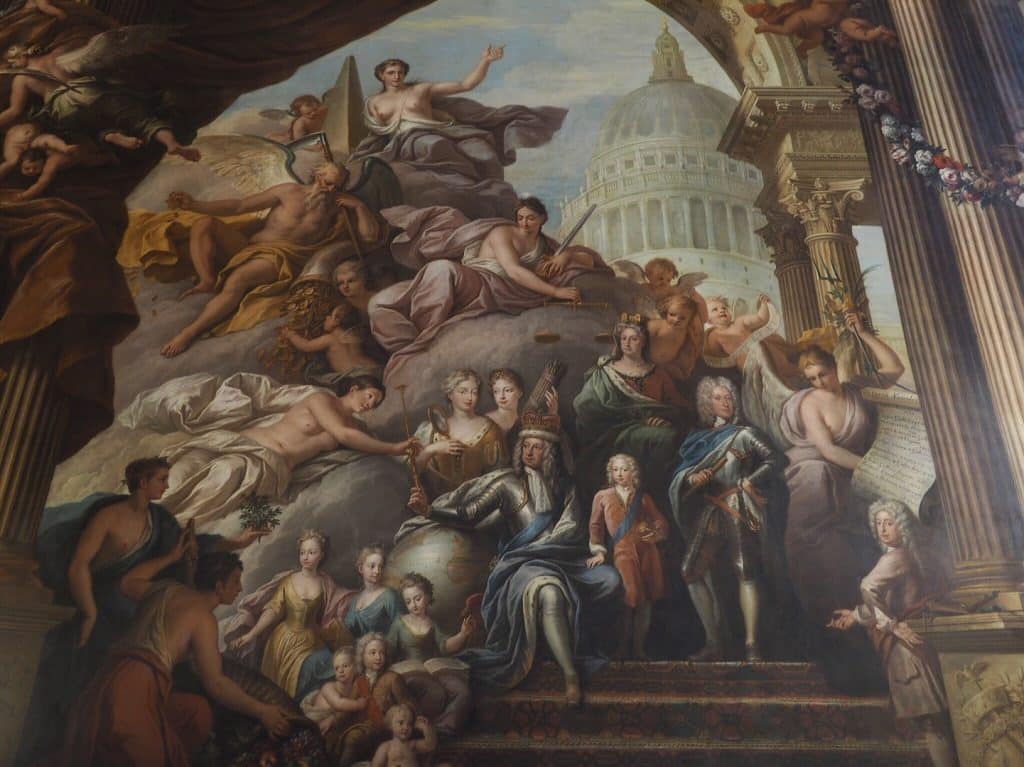 He’s surrounded by his family, the future Kings (including George II standing with a blue sash on the right), all to convince the public that the monarchy is in stable hands.

There’s another figure we should also spot, standing to the far right against a pillar and looking out at us. This is the artist James Thornhill, holding out his hand as if offering up his work for us to see. 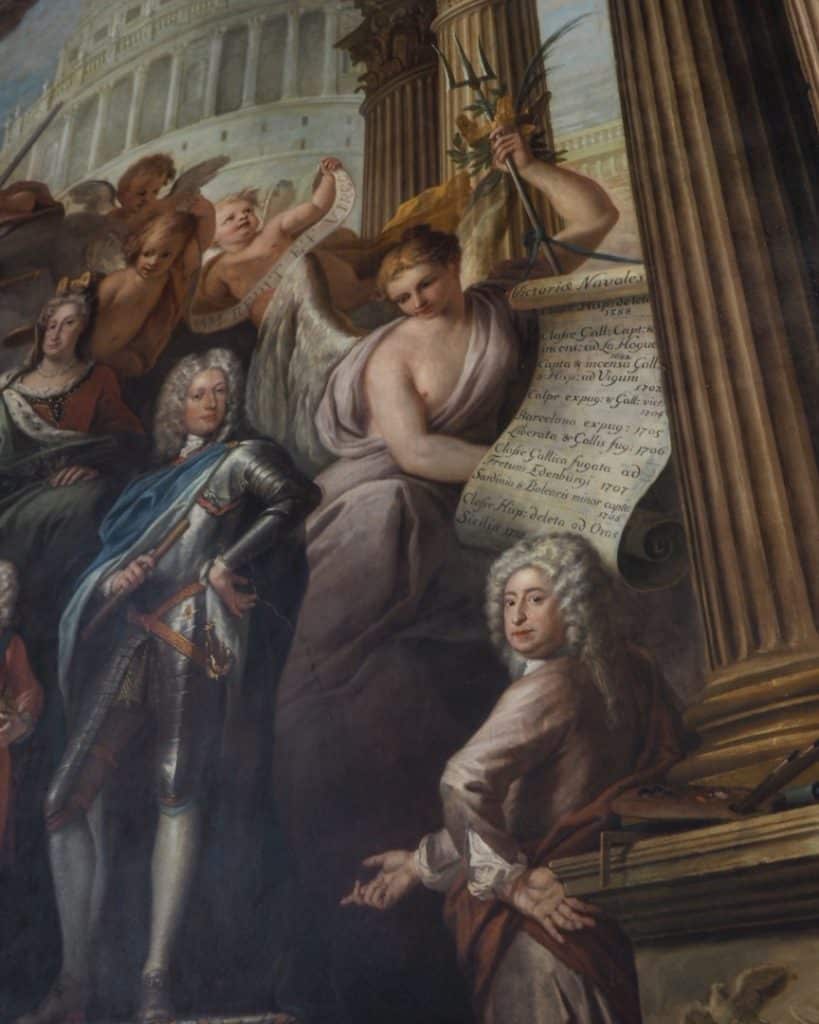 Although some say he’s merely gesturing to the painting. I like to think he’s holding out his hand in payment. Now, despite being paid £1 per square yard for his work (around £500,000 today) that included pay for all his assistants and materials, of which there were many.

The exposure seemed to work though, Thornhill would later be commissioned to paint the inner dome of St Paul’s Cathedral. Another space with mesmerising trompe l’oeil effects.

Across the main section of the hall is a huge mural with King William III and Queen Mary II in the centre of an adoring mass. 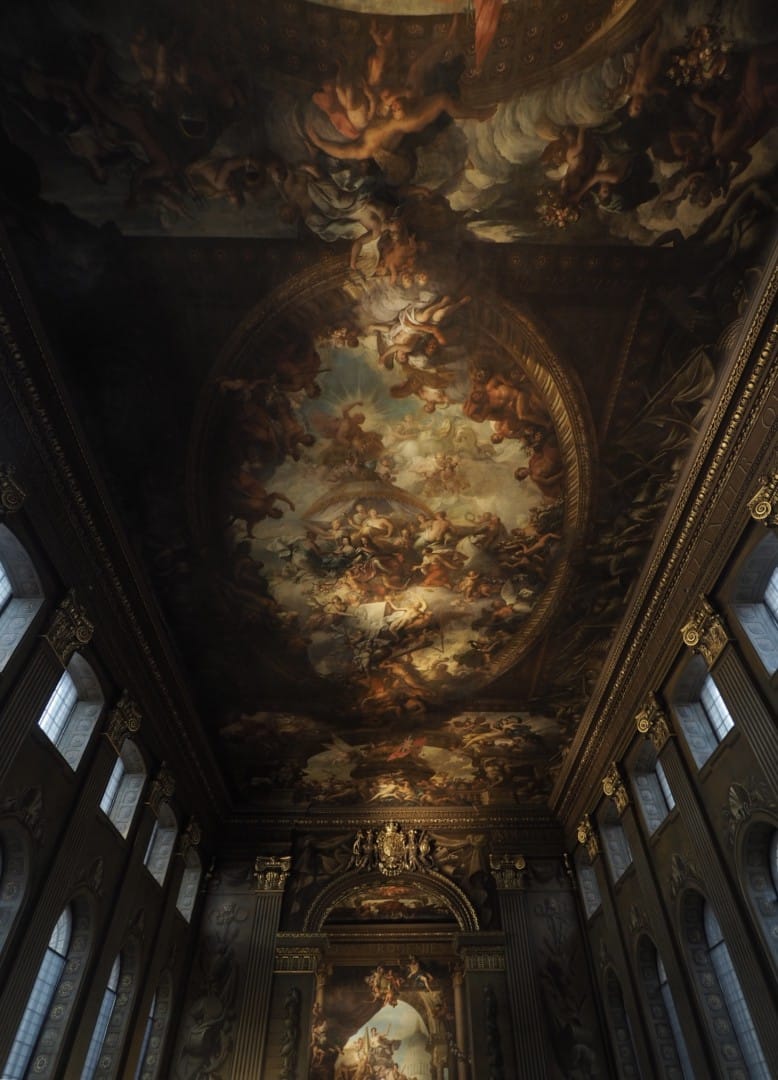 Really, there are too many details to pick out. Plus, it would spoil the fun of you looking up yourself! But if you’re interested in some of the (very) close up details. During the restoration process they had ceiling tours. 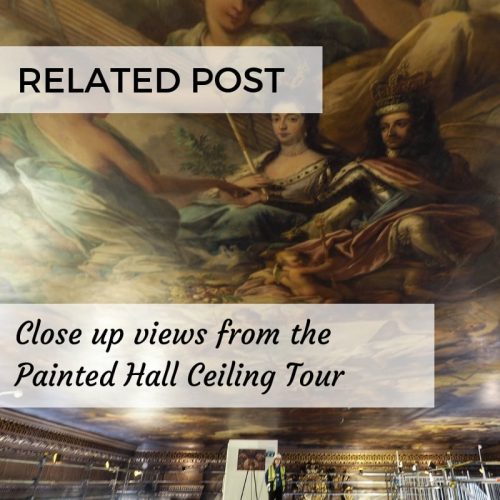 Online adult tickets to the Painted Hall cost £11 (£12 on the day in person) but there’s concession prices available.