Inside the Poppy Factory

in London, Things to do in London, West London
4 Comments

Each November, the paper red poppy can be seen pinned on the lapels of Brits, Canadians, Kiwis and Aussies. They’re worn as a symbol of remembrance for the war dead, initially as a direct reminder of the First World War, but today they represent the sacrifice of all ex-servicemen.

But how are they made and why did we choose this red flower?

You can find answers at the Poppy Factory in Richmond. 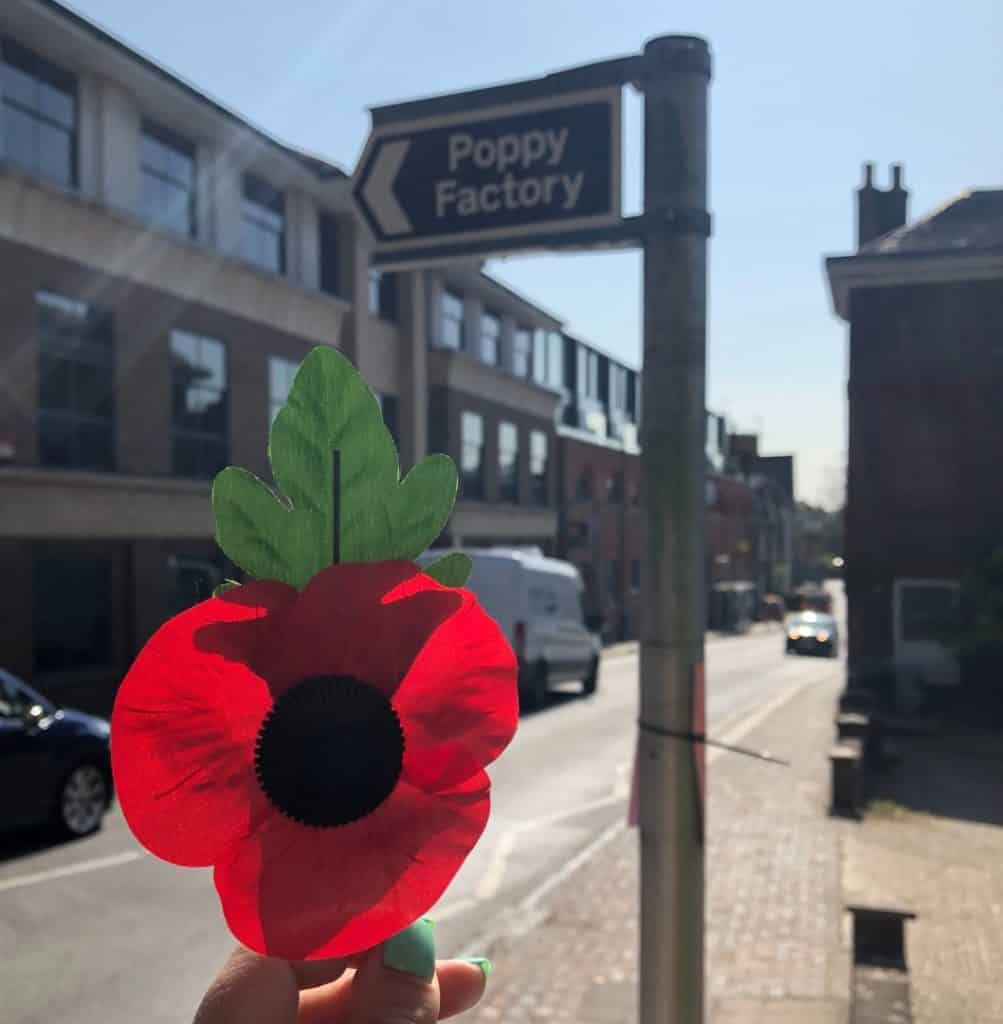 Why the Red Poppy?

The seed of the poppy flower can lay in the ground, dormant, for 100 years. It’s only when it’s disturbed that it begins to grow and that’s exactly what happened in the churned up fields of France and Belgium during the First World War.

Men at The Front noticed that poppies started growing across battlefields. They treated these flowers as messages from friends that had been killed, some wearing them in their helmets for good luck.

Some even started sending poppies home. 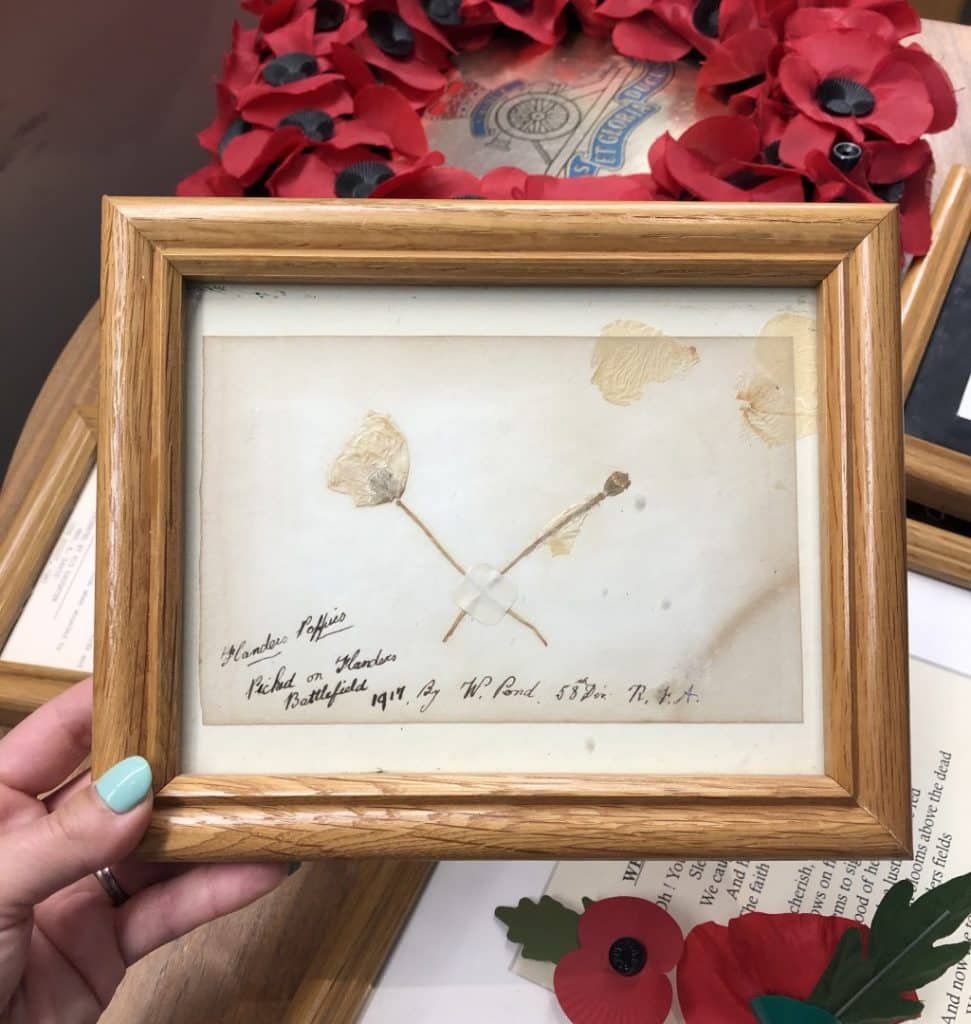 The above dried poppy is from Flanders Battlefield, 1917. W Pond sent it as ‘a piece of me’ to bring comfort to his family. Luckily he did make it home to be reunited with them.

But the image of the poppy went global after a poem by John McCrae, a Canadian Solider and Surgeon, was published in Punch Magazine in 1915.

In Flanders fields the poppies blow
Between the crosses, row on row,
That mark our place; and in the sky
The larks, still bravely singing, fly
Scarce heard amid the guns below.

We are the Dead. Short days ago
We lived, felt dawn, saw sunset glow,
Loved and were loved, and now we lie
In Flanders fields.

Take up our quarrel with the foe:
To you from failing hands we throw
The torch; be yours to hold it high.
If ye break faith with us who die
We shall not sleep, though poppies grow
In Flanders fields.

For Moina Michael, an American Professor, it was the final lines in the poem that struck a chord. She vowed to always ‘hold a torch’ to the war dead by wearing a poppy to symbolise their sacrifice. Michael also had the idea to sell silk poppies in order to raise funds for ex-servicemen.

By 1920 the poppy became even more poignant when it was used during the burial service of the Unknown Warrior, an anonymous British Soldier buried in Westminster Abbey.

Today the grave of the unknown warrior lies in the centre of the nave of the Abbey, surrounded by a wreath of poppies made in the Factory. No one – not even the Queen -can walk across his grave.

The Factory also has a space wreath, every 6 months they are swapped.

In France, the owner of an artificial flower business called Anna Guérin saw McCrae’s poem and Moina Michael’s ideas and thought she could help.

She suggested to the newly-formed British Legion Charity that her factory could provide the flowers. She would be reimbursed for the cost from the sales and 11 November 1921 was the first Poppy Day, raising £106,000 (around £3million today). 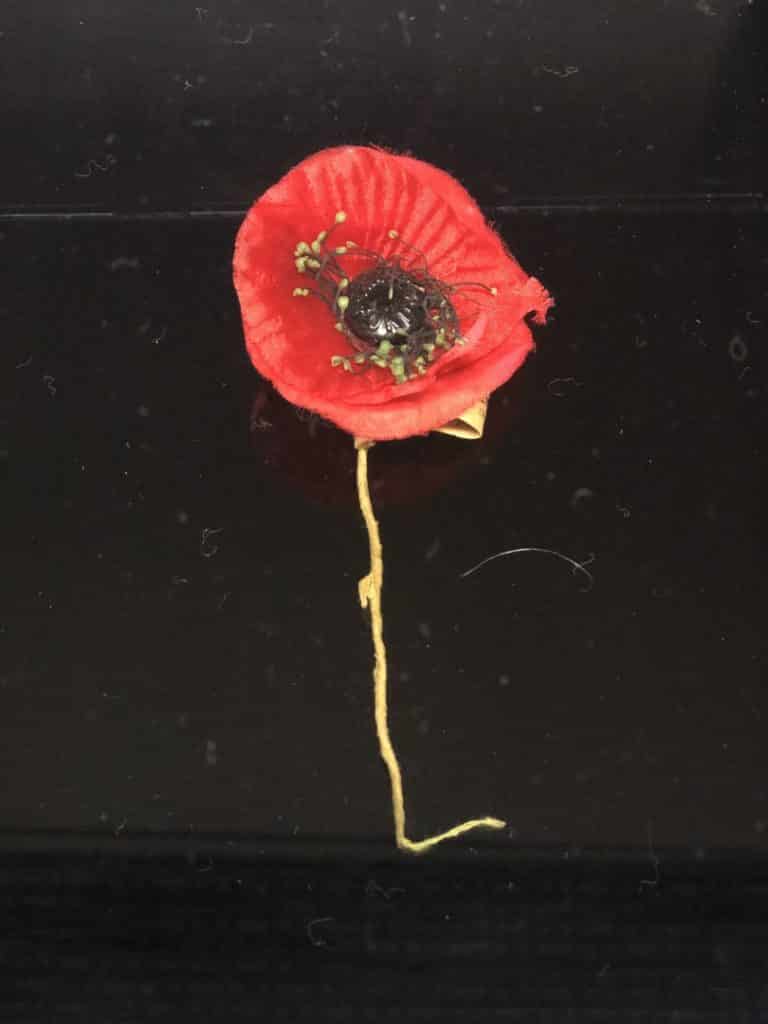 After the success of the first poppy appeal, Major George Howson had the idea that poppies could be made by disabled ex-servicemen. In 1920 Howson had established the Disabled Society in response to the growing numbers of unemployed, wounded servicemen returning home. 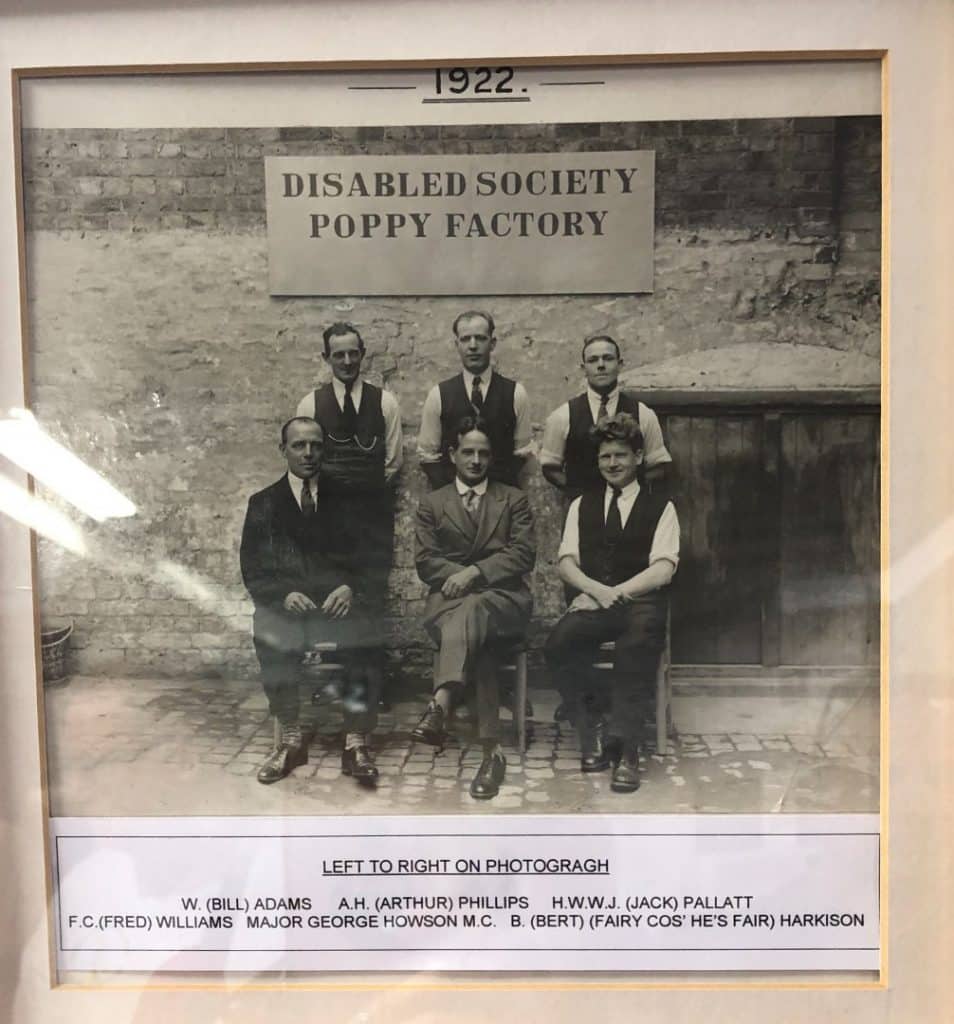 They worked in a Bermondsey factory that used to make collars, before moving to the cleaner air of West London in 1925. Today they’re in the former Lansdown Brewery, Richmond.

Inside the Poppy Factory 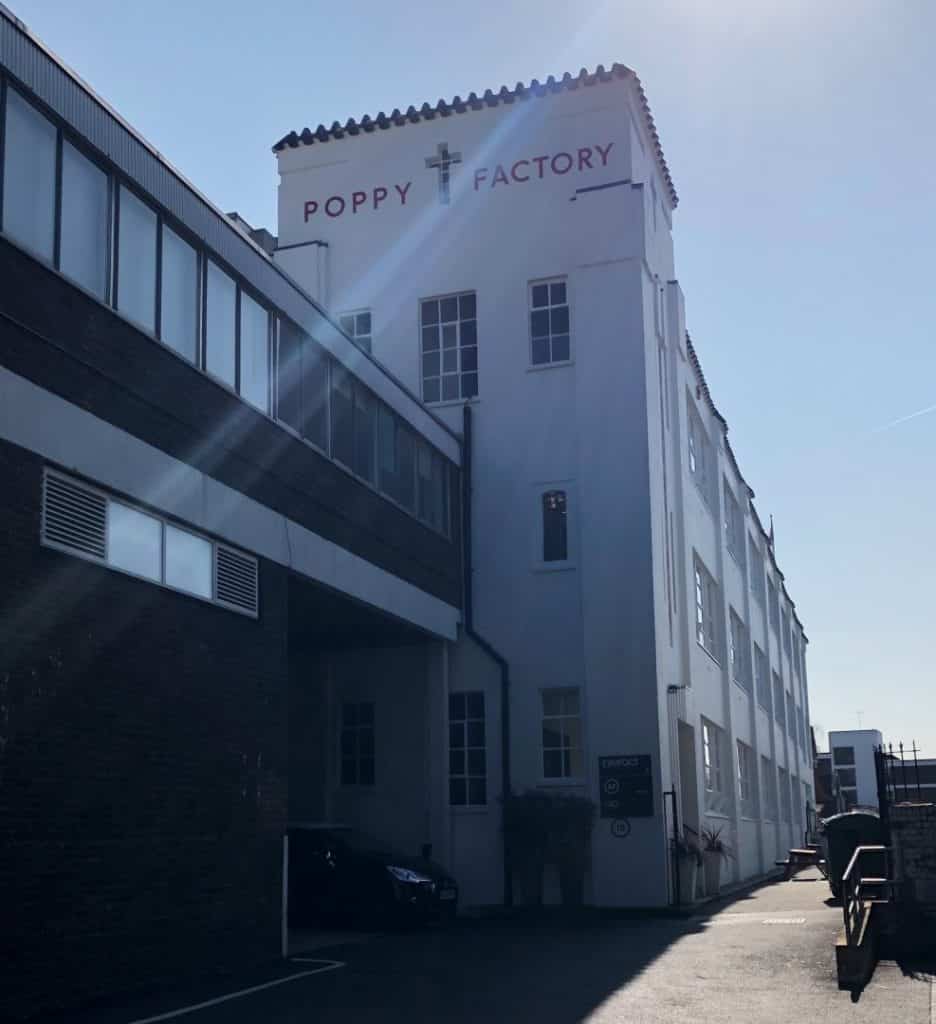 Over the years the Poppy Factory has grown, bolstered by Royal Patronage (the Prince of Wales ordered a large wreath for the cenotaph in 1924) and the factory even received a visit from HM Queen.

Today the modest factory still produces 6 million poppies a year (all made by hand!) and sold to the Royal British Legion to be added to their machine-made poppies and distributed and sold throughout November.

The machines below punch out 4,500 poppy petal shapes in 6 minutes. But the poppies are assembled by hand by employees, with each box bearing the name of the ex-serviceman who made them.

How do you make a Poppy?

George Howson knew he wanted to provide paid work for disabled ex-servicemen and so he designed an easy-to-use tool to make the poppies with only one hand. 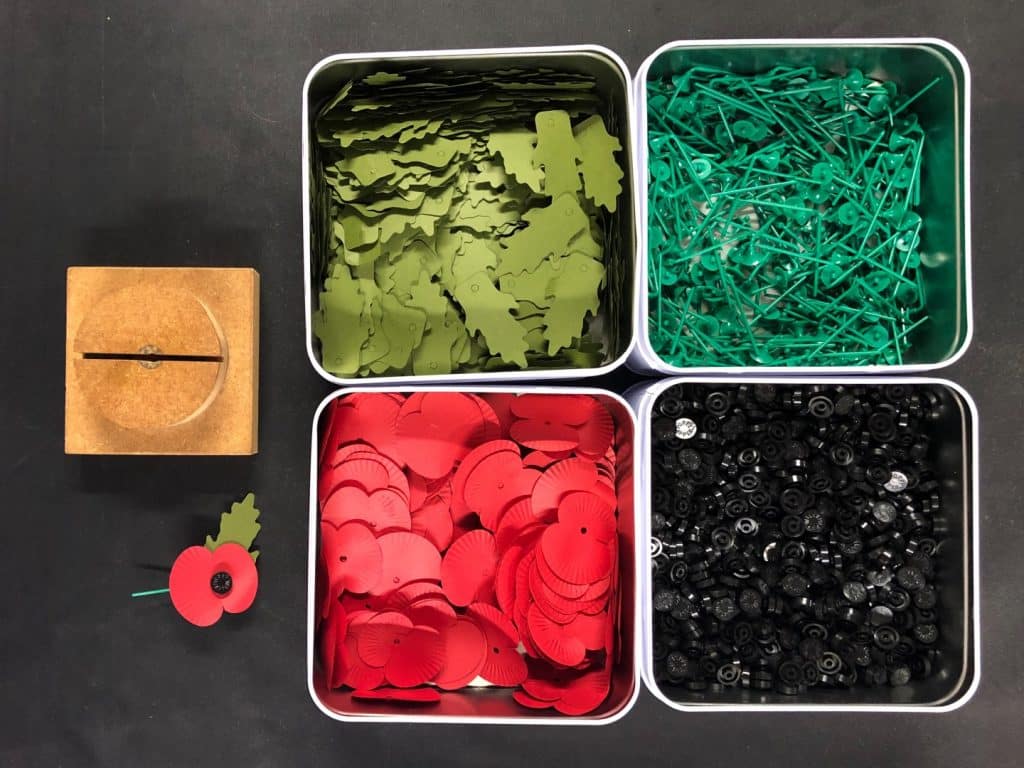 Once you have the elements, you place the stalk in the groove of the wooden block, then put the leaf and red petal on top, sealing them all in place with the black centre piece. 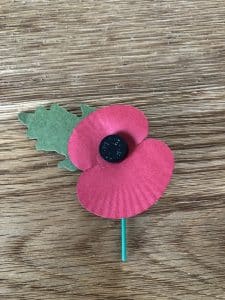 You can book a tour of the factory that lasts around 2 hours via the Poppy Factory website. These are free and run twice daily for individuals or groups up to 35. The booking form and more information can be found here.