Queenhithe Mosaic: Telling The History of The City

In a quiet spot along the North of the River Thames, you’ll find the Queenhithe Mosaic, an epic 30m artwork that charts the history of the City.

Today it feels like a backwater, but this was actually the birthplace of modern London. 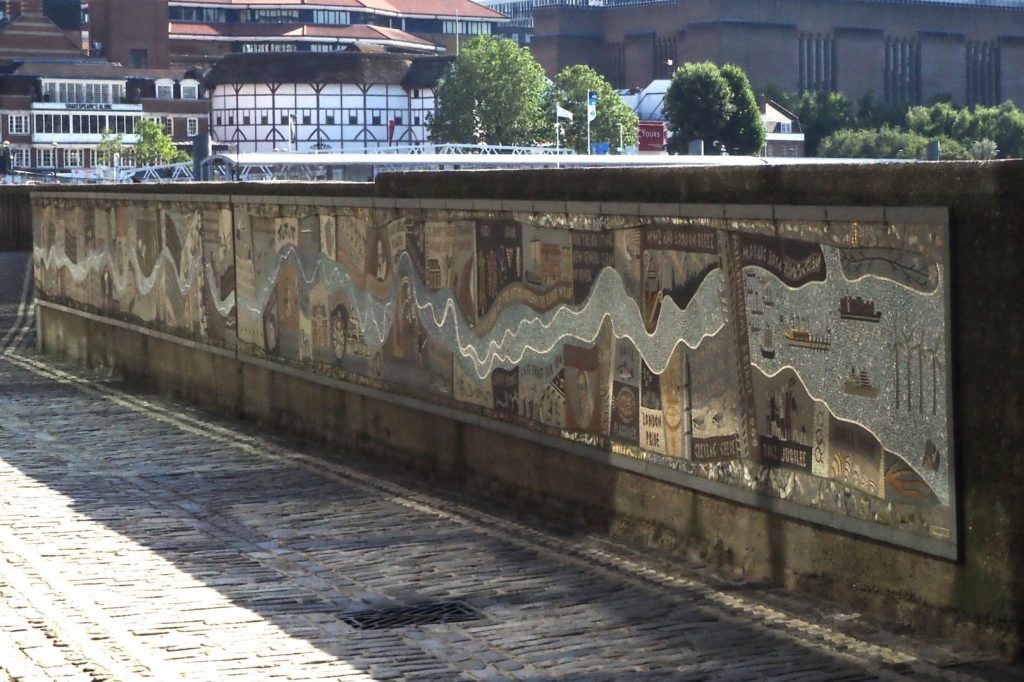 Welcome to Queenhithe, the site where Alfred the Great re-established the City in 886, after it had been abandoned by the Romans.

There’s even a plaque (installed in 1986) which tells you so. 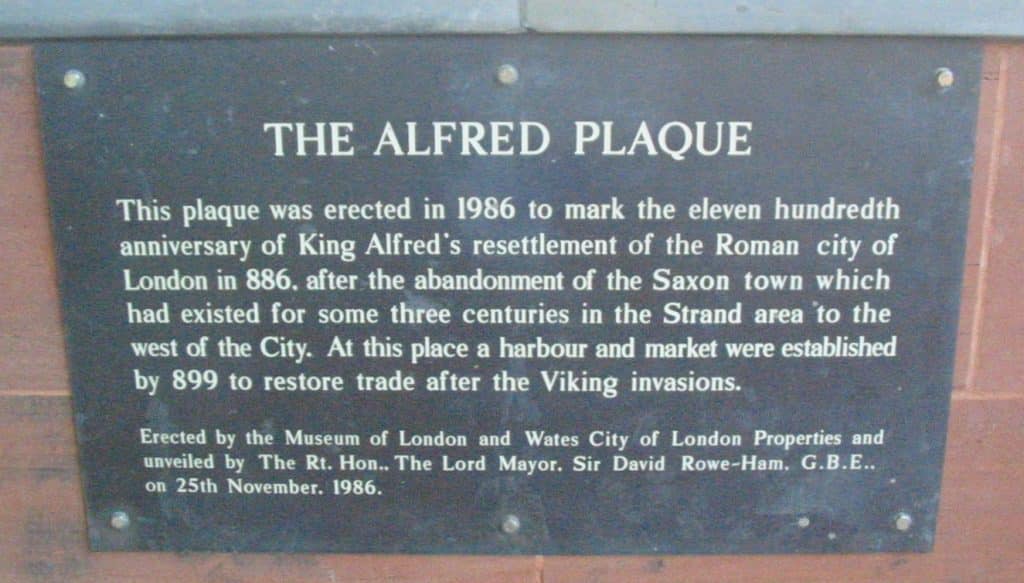 It was recorded in contemporary accounts as ‘Ethelred’s Hythe’ (Hythe or Hithe being a Saxon word for small port) and the goods were sold directly from beached boats.

It’s also shown on the Agas Map, a woodcut map which is one of the earliest depictions of the City.

In the 12th Century the port became known as Queenhithe, so Queen’s Harbour.

Which Queen? Good question. It’s Matilda, born 1080 in Scotland and married to King Henry I aged 20. In the early 1100s she acted as Regent for her King while he was travelling in England and Normandy

Anyway, the link with this spot is that Matilda was granted the tax revenues of imports here.

It’s a scheduled ancient monument and probably the only surviving Anglo-Saxon dock left in the world.

The artwork was commissioned by the City of London and 4C Hotel Group footed the bill. The design is by Tessa Hunkin and Southbank Mosaics put it all together.

Over 30 metres they have to fit in 2,000 years of history. Much like the story of London itself, the River Thames runs through it.

They were also inspired by actual archeological objects found at Queenhithe, picking discarded fragments from the Thames foreshore.

The finds were taken to Southbank Mosaics and washed, so real historic objects are used in the final piece which you can see along the top.

Key moments and historic figures are highlighted along the route. 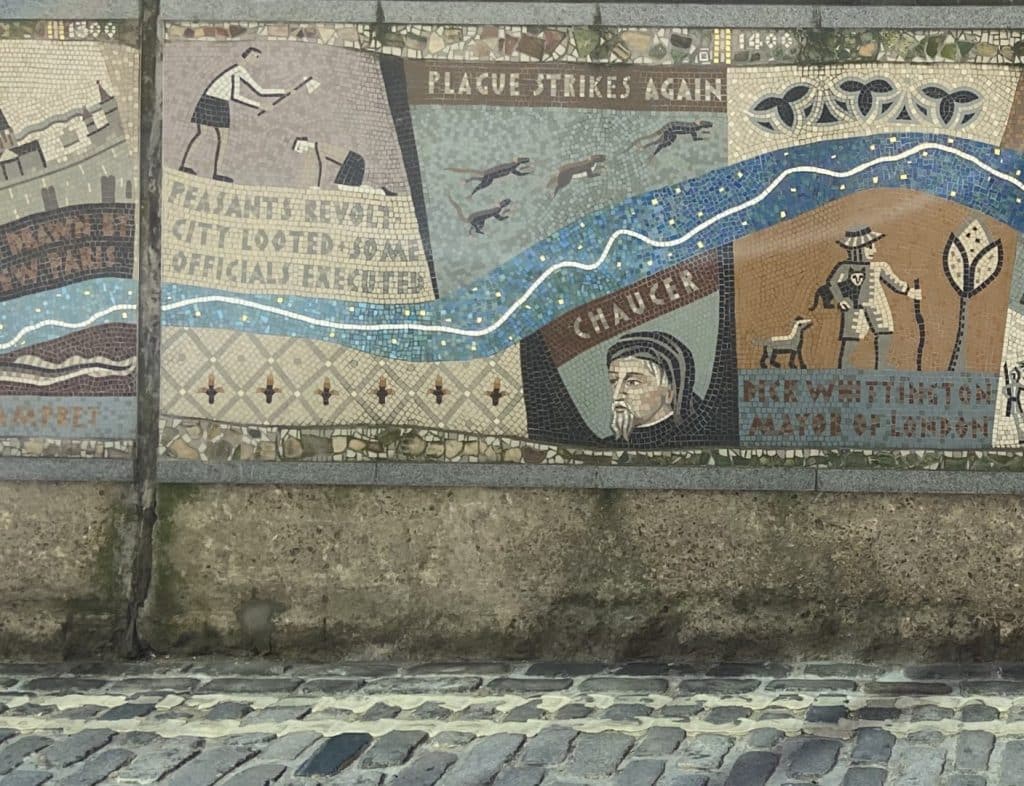 And I particularly liked the way that from one angle it appears as though William Shakespeare was glancing over to his rebuilt theatre across the River. 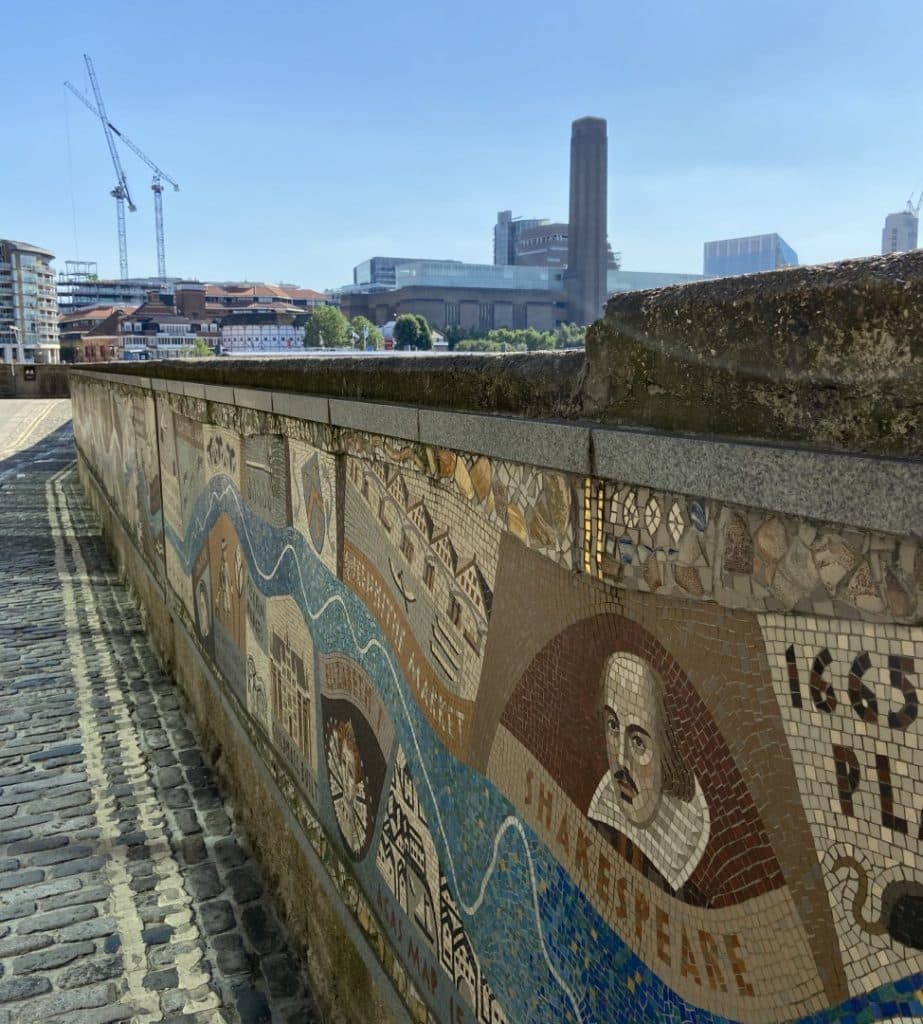 Finished in 2014, the artwork ends with more modern scenes; The Blitz and Millennium Bridge.

I also loved the inclusion of animals and marine life in the Thames and there’s a lovely little waving seal at the end!

You can explore the details for yourself by walking along the Thames Path.