History Above Your Eyeline On Regent Street

Today Regent Street is one of London’s most important shopping hubs. But that doesn’t mean it can be dismissed. It’s still worth looking up and admiring the details. After all, history can almost always be spotted above shop-level! 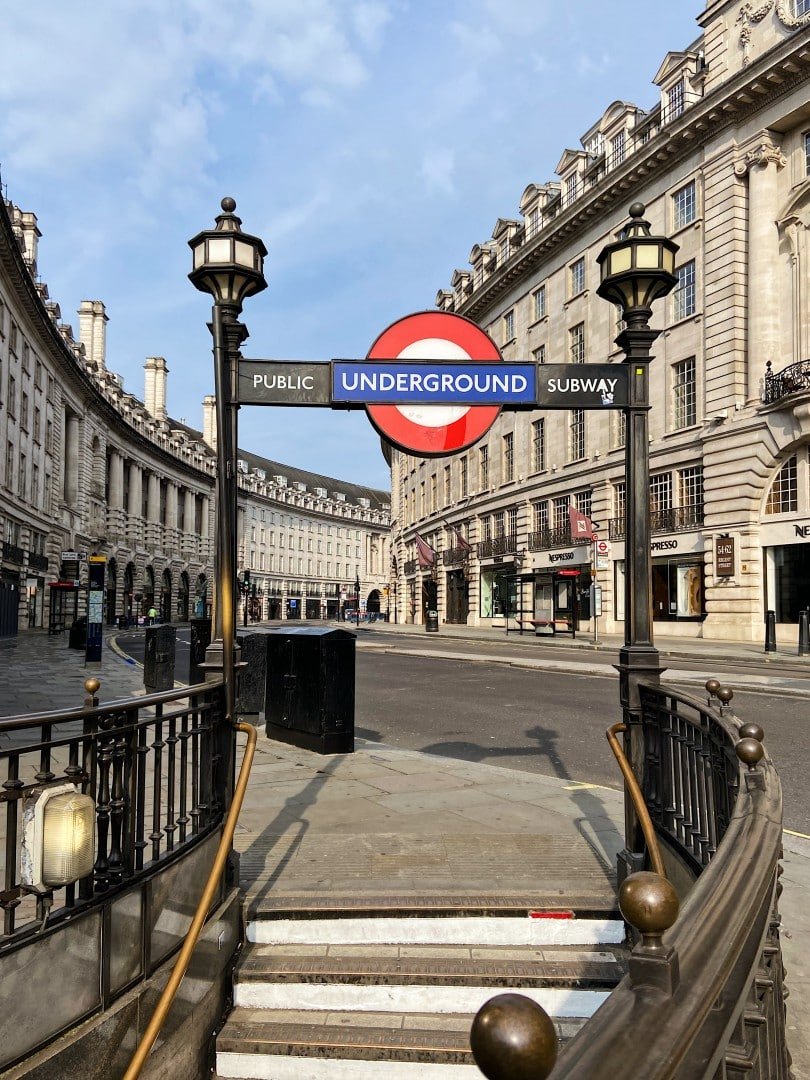 Dividing wealthy Mayfair with the slightly seedier (but far more fun!) Soho, Regent Street was envisaged as part of a much larger piece of town planning. It’s worth a quick look at this history before we start looking at the details.

Under a commission from the Prince Regent (later King Georg IV) John Nash designed Regent Street in 1819. The plan was to connect Carlton House (a former palace on The Mall) with Regent’s Park.

Despite the Prince Regent’s hopes, the road couldn’t be exactly straight because of existing land ownership.

The dramatic curve of the street towards Piccadilly Circus – originally known as the Quadrant – preserved the mansions of St James’s, minimised demolition costs and forms a bookend to the West End that’s desirable for commercial tenants. 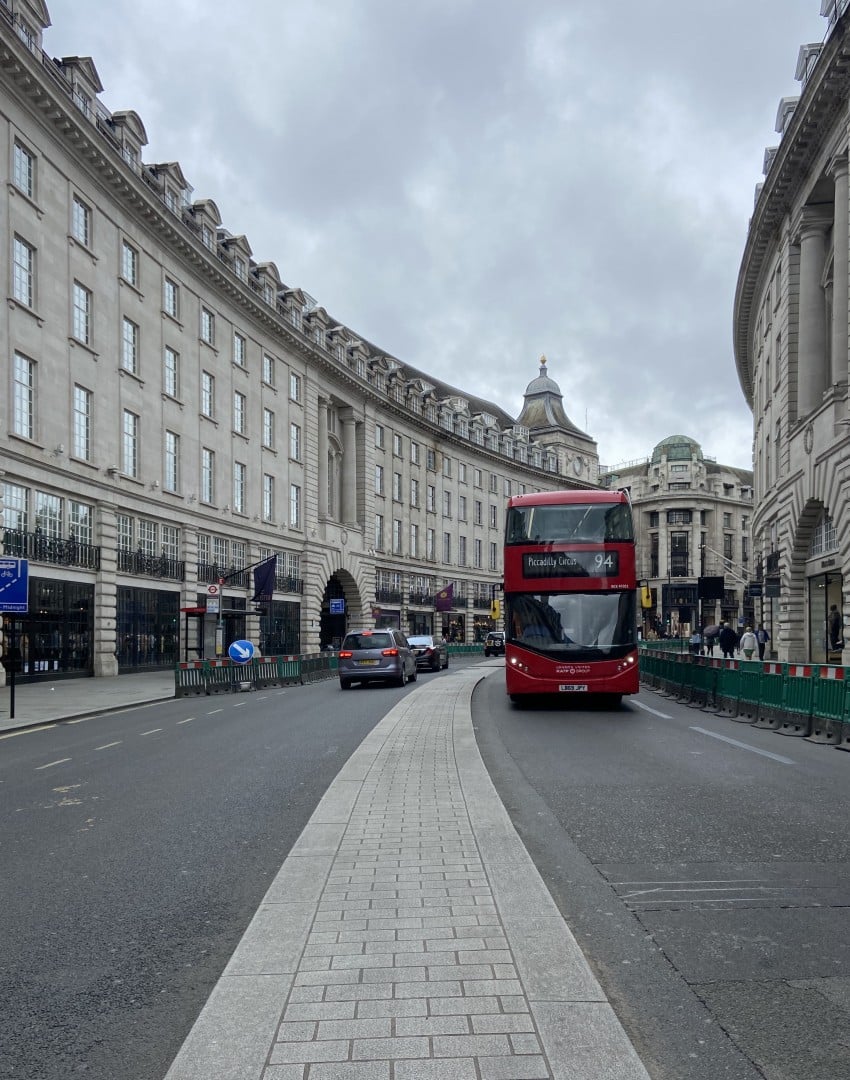 Nash’s plan was celebrated (Pevsner calls it “quite simply the greatest piece of town planning London has ever seen”) However, by 1848 there were plans to demolish the Quadrant North of Piccadilly Circus. 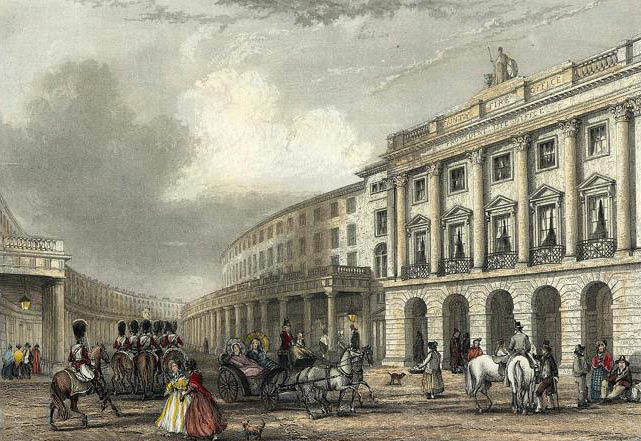 A major reason was the Nash’s Colonnade, hated by the traders because of the lack of light and abundance of vice (sex workers were said to frequent the covered areas) they were torn down.

Somewhat shockingly to us today, what followed in the early 1900s was that almost all of Regent Street was rebuilt, allowing for commercial premises on a much larger scale.

As discussed, the original plan covered a larger area, so we’re focussed on today’s Regent Street, the length between Piccadilly Circus and All Souls, Langham Place.

From Piccadilly Circus you still get a sense a Nash’s colonnade from the rebuilt County Fire Office (Ernest Newton, 1924-7). 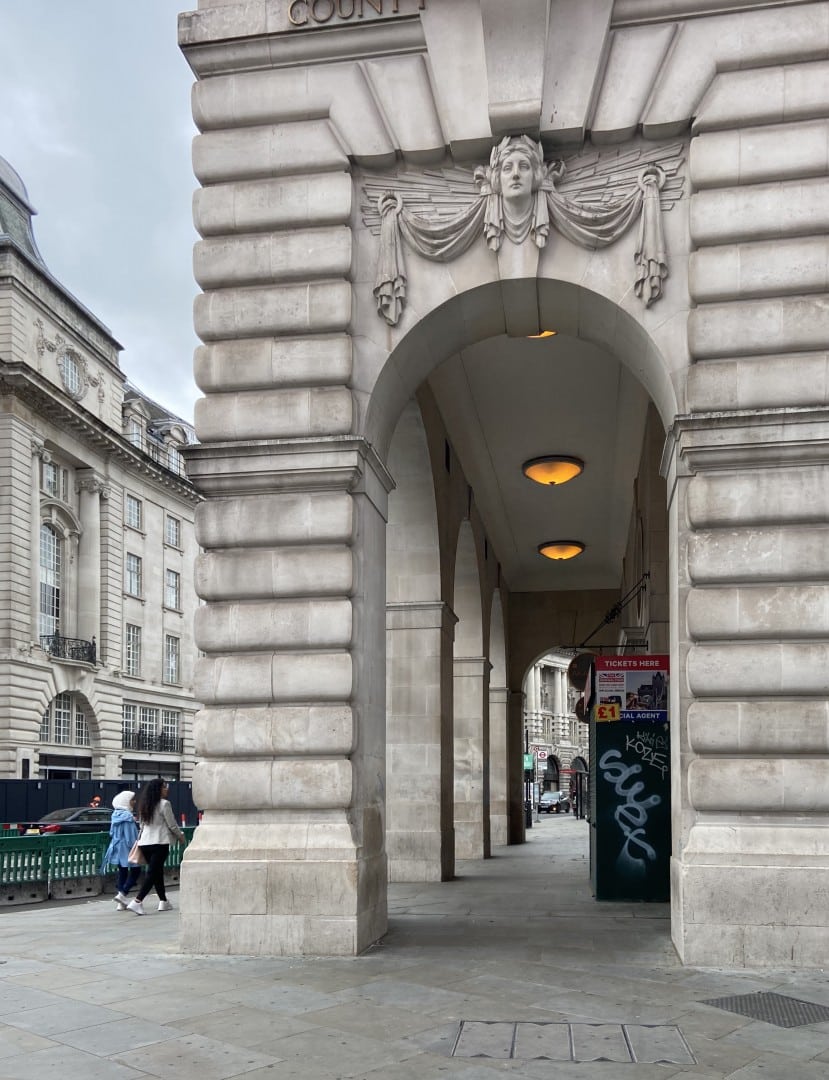 But the best bit is the dome and sculpture group on the roof, Britannia and lion by Hermon Cawthra. 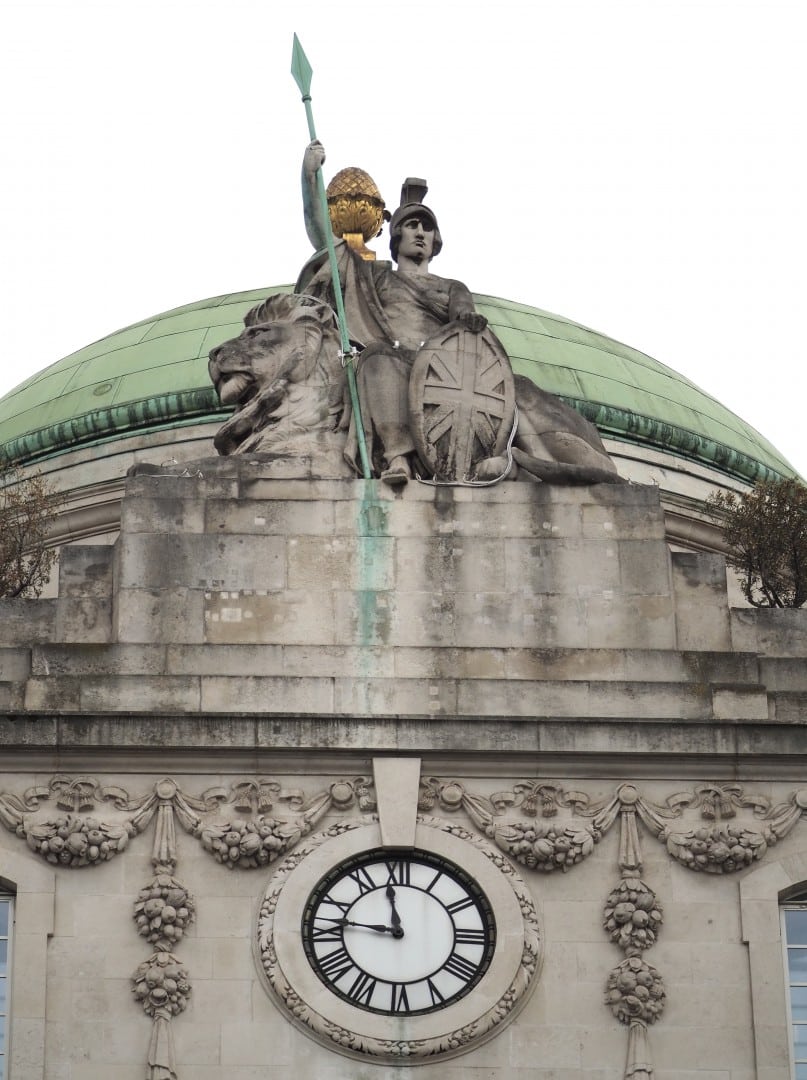 Though the building had to be rebuilt to fit the new scale of the street, looking at older pictures it definitely took Nash’s original design as its starting point.

A short walk North brings you past the sweeping Quadrant and in front of a striking green dome. 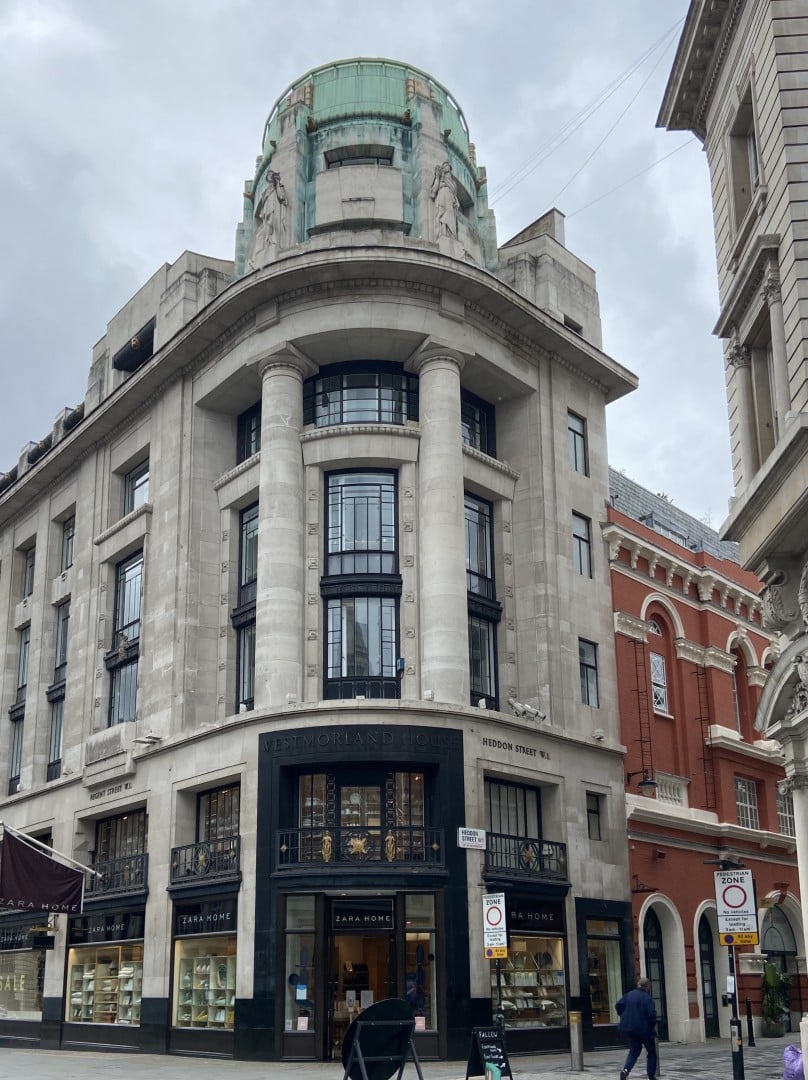 These complicated addresses were once all one single building; New Gallery (Burnet & Tait, 1920-25). Today they’re split into multiple flagship stores including Burberry and Zara Home. 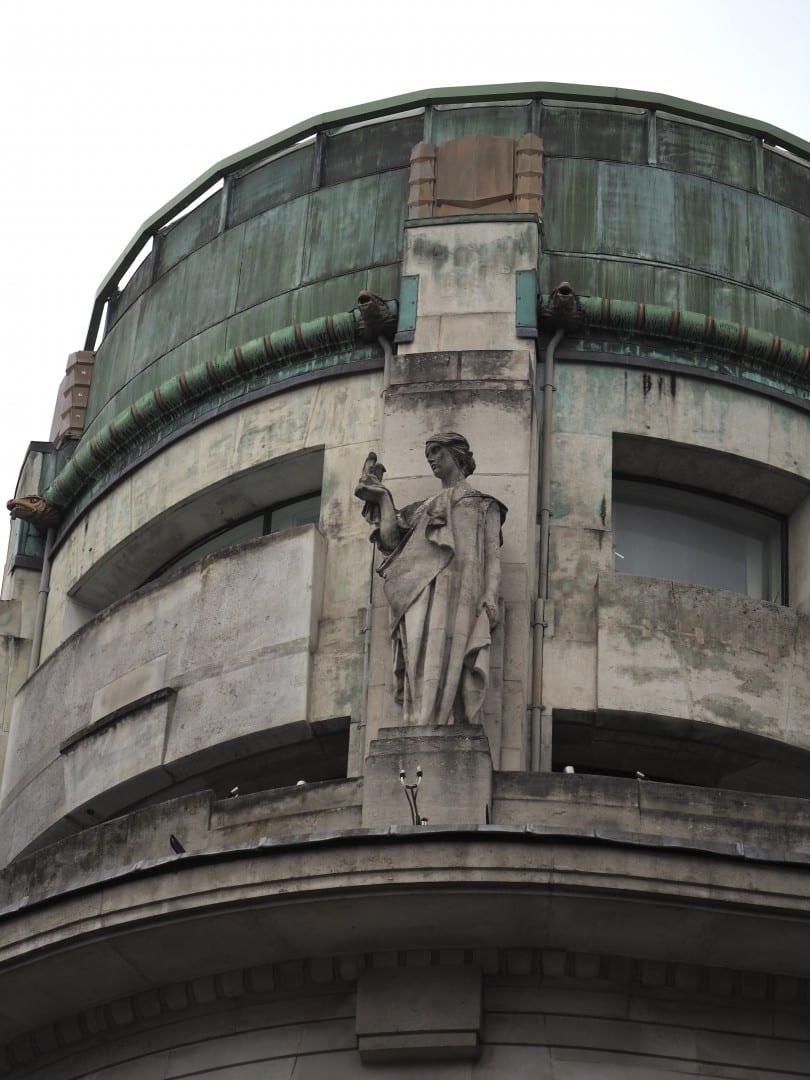 The statues are by William Reid Dick and the most striking is the cross-legged ‘Spinner’ girl. 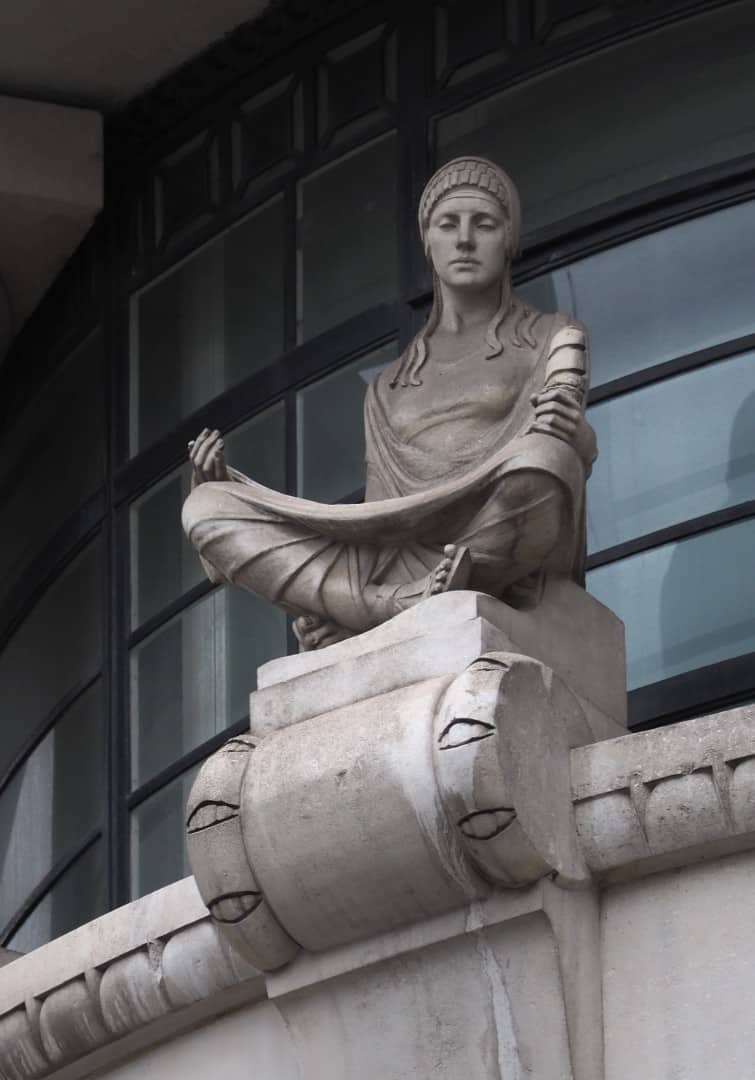 Holding her weaving tools, the figure is a reference to the Scottish Clothing Company; R.W. Forsyth who formerly occupied the South corner of the building. 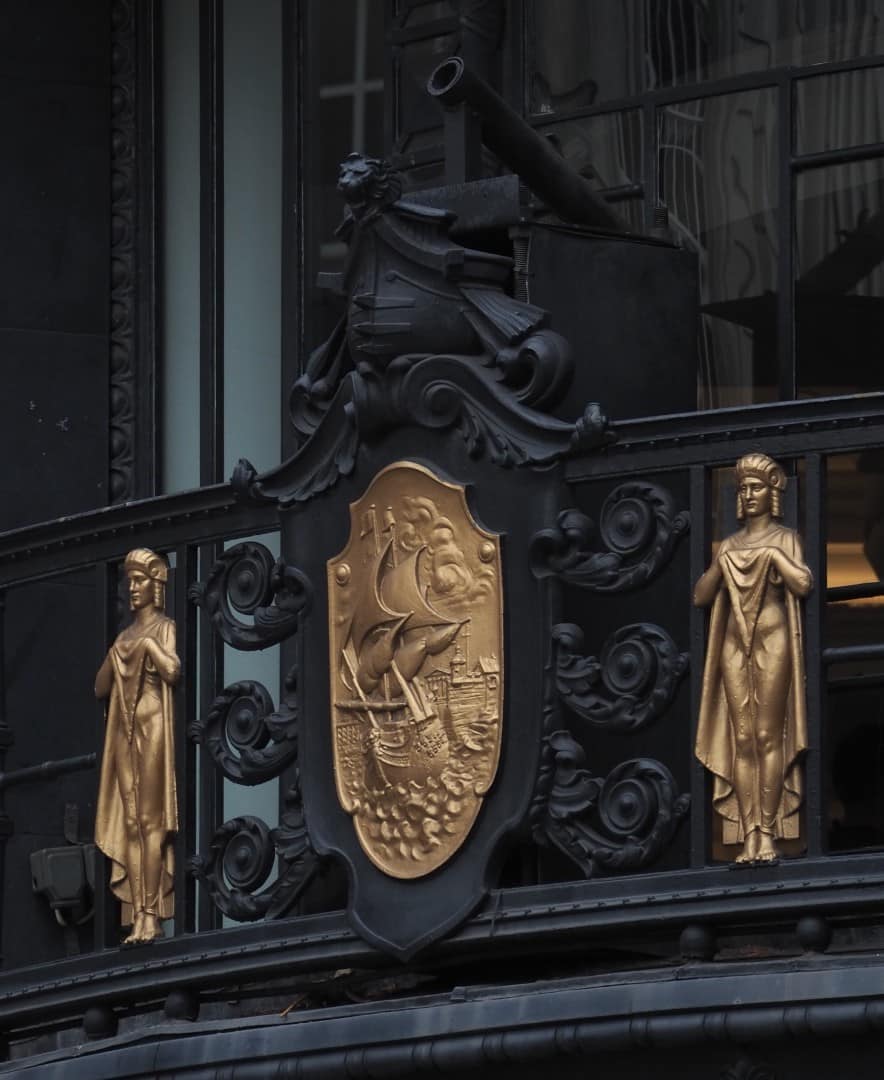 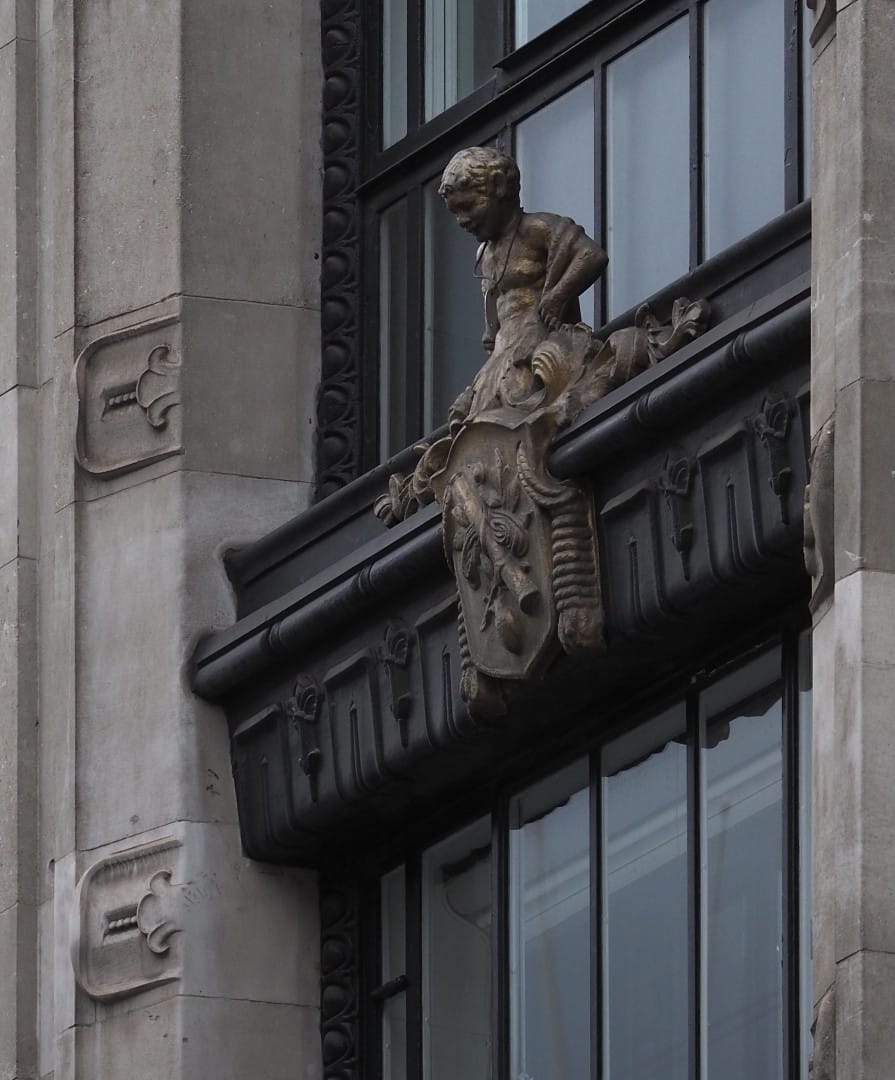 The rest of the New Gallery was originally an art gallery, restaurant and cinema which opened in 1924. The cinema contains Britain’s oldest surviving wurlitzer organ from 1925 and its interior is listed and can be seen when you visit Burberry. The Wurlitzer is tucked behind one of the large screens.

Further up and on the East Side is the former Linen Halls, built for Robinson & Clever of Belfast. 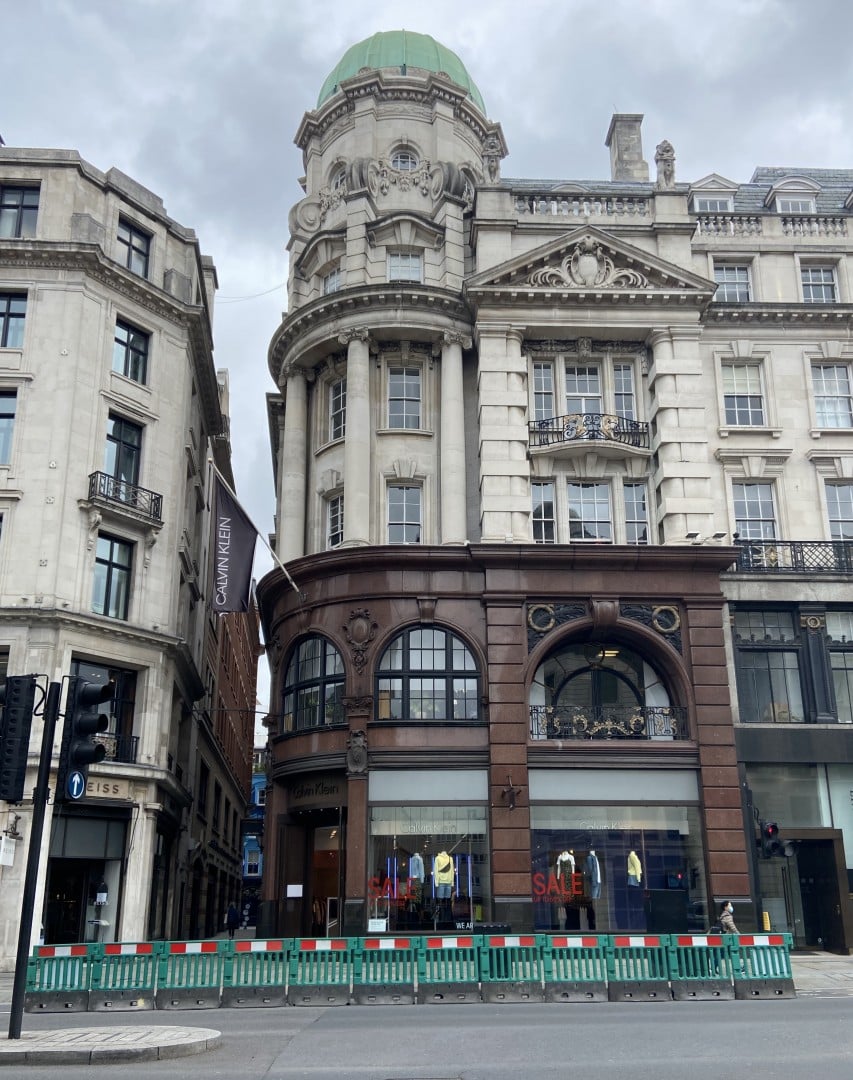 Their entwined initials are a hint to the original shop which is now used by Calvin Klein, Guess, Anthropologie and Massimo Dutti. 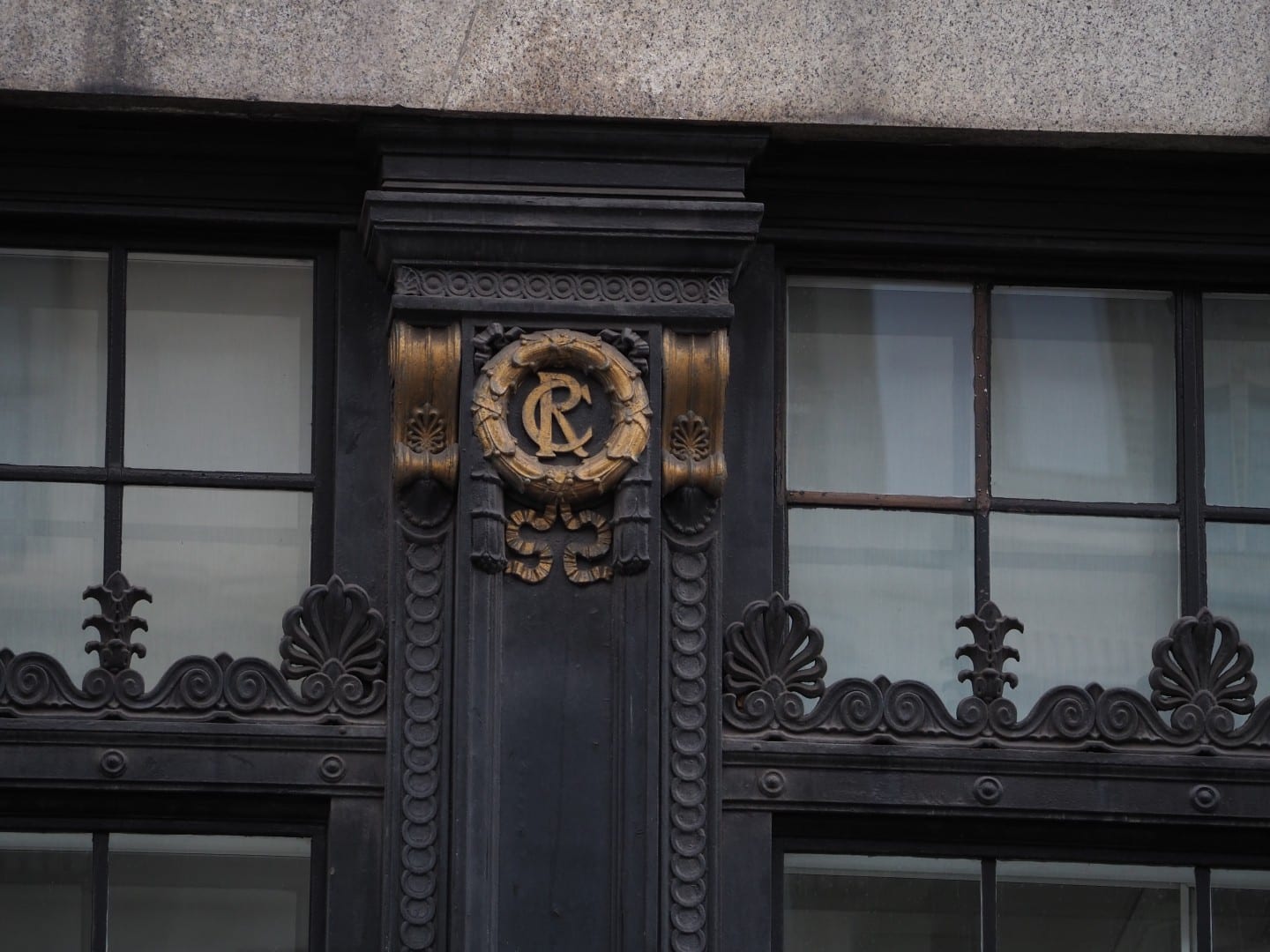 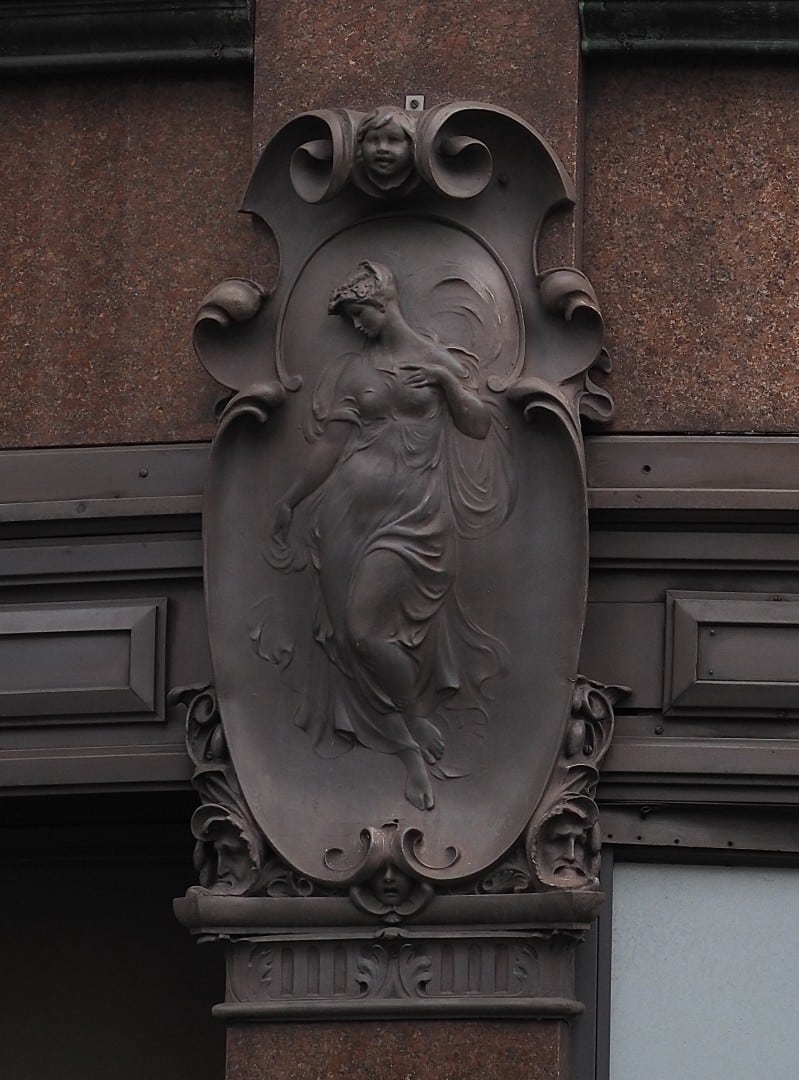 Probably the most striking building on Regent Street is the former site of Liberty (designed by ET and ES Hall, 1926). 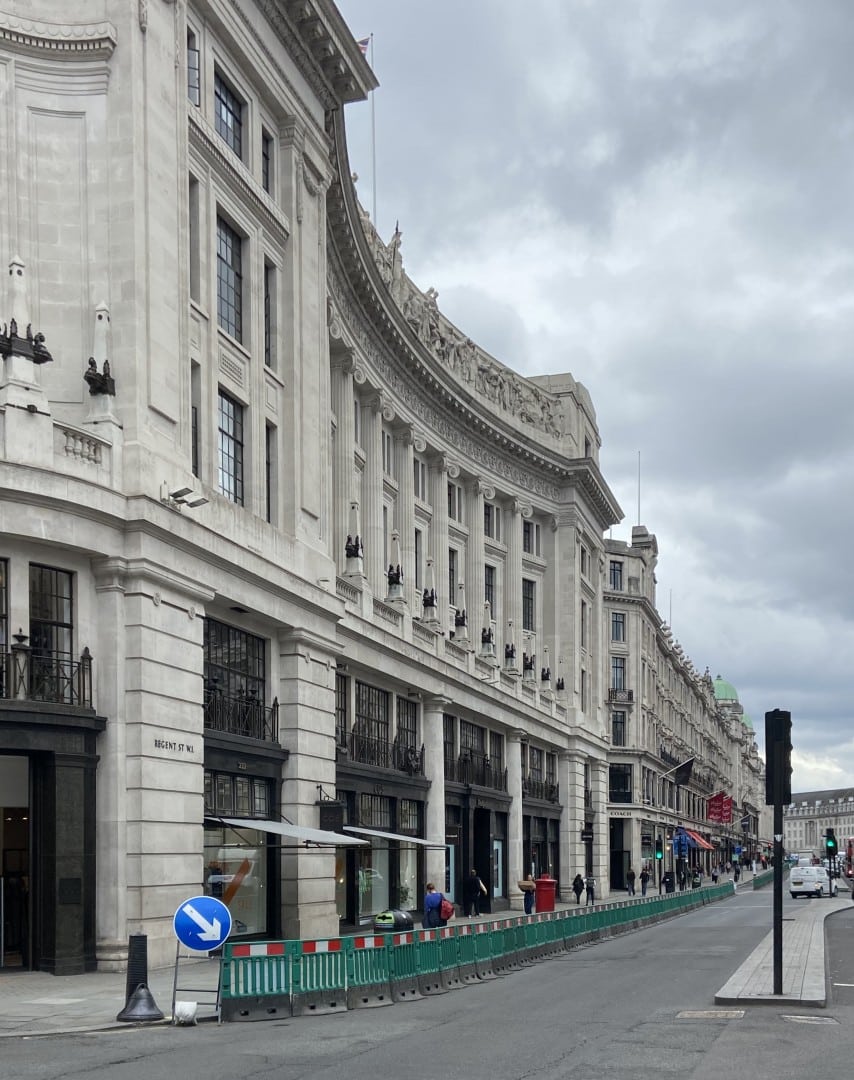 Founded in the 1870s by Arthur Liberty, this stone building often gets overlooked in favour of its faux-Tudor neighbour on Great Marlborough Street. 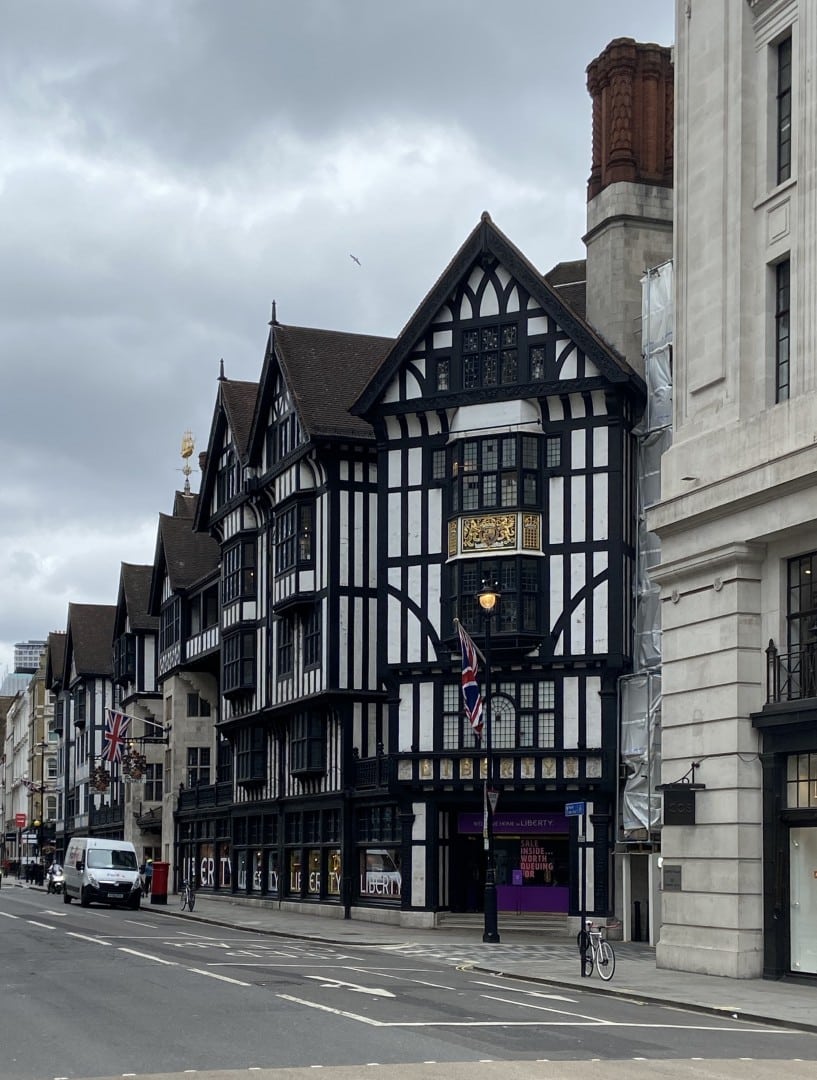 The showstopper is the huge sculptural frieze along the top, one of the largest sculptures in London! 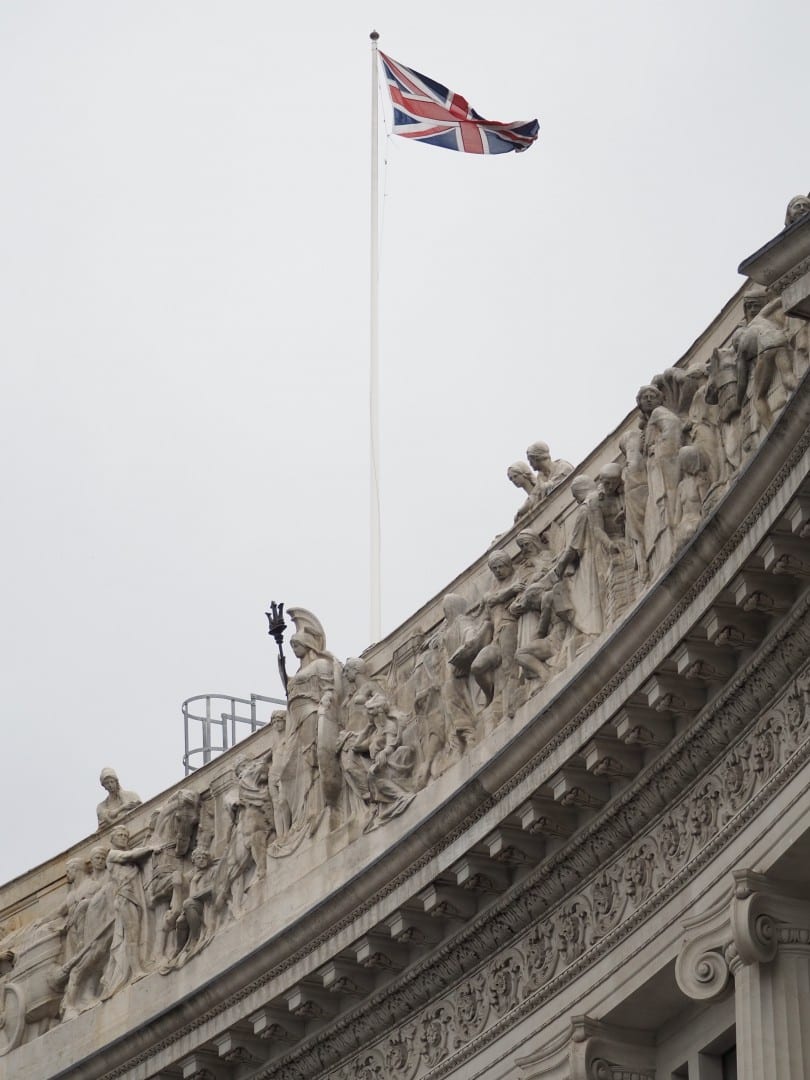 It was designed by Charles L. J. Doman, and T. J. Clapperton, showing ‘Britannia with the wealth of East and West’. Within the frieze Britannia sits in the middle, happily accumulating the best the rest of the world can offer. 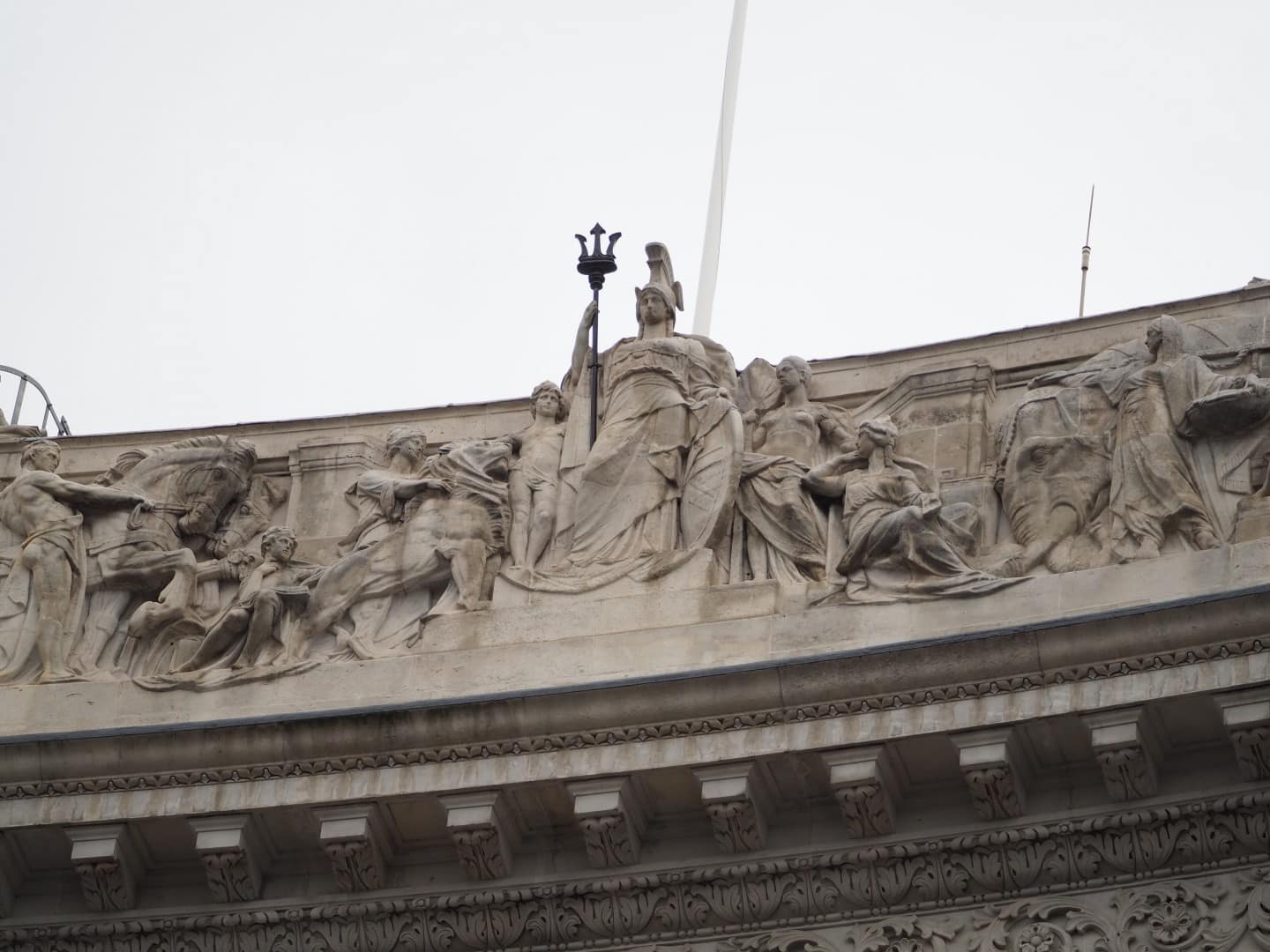 The whole scene is full of images of trade and exchanging luxury goods. 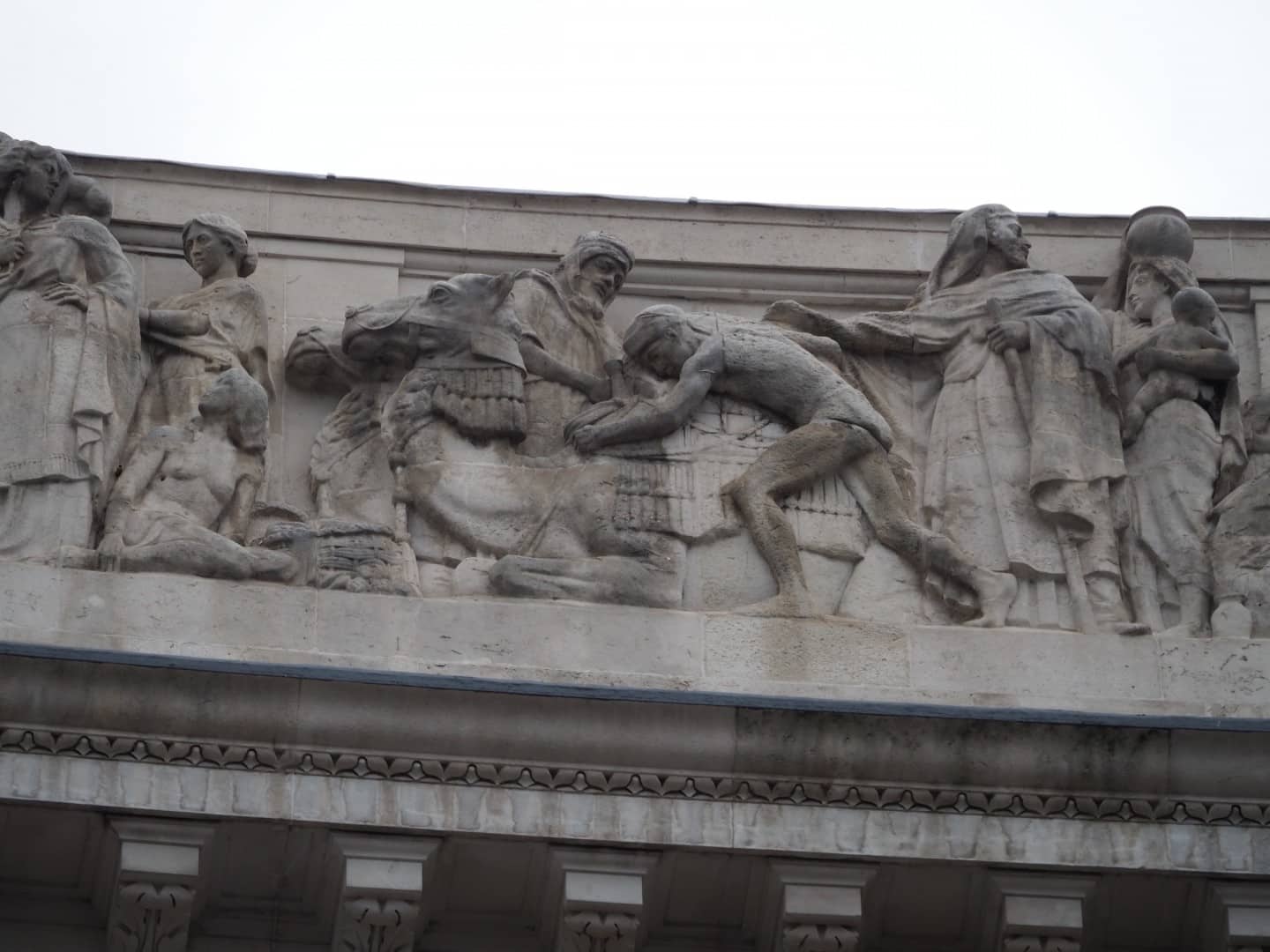 Allusions of exoticism abound, from the stone turban-clad merchant on the far right, 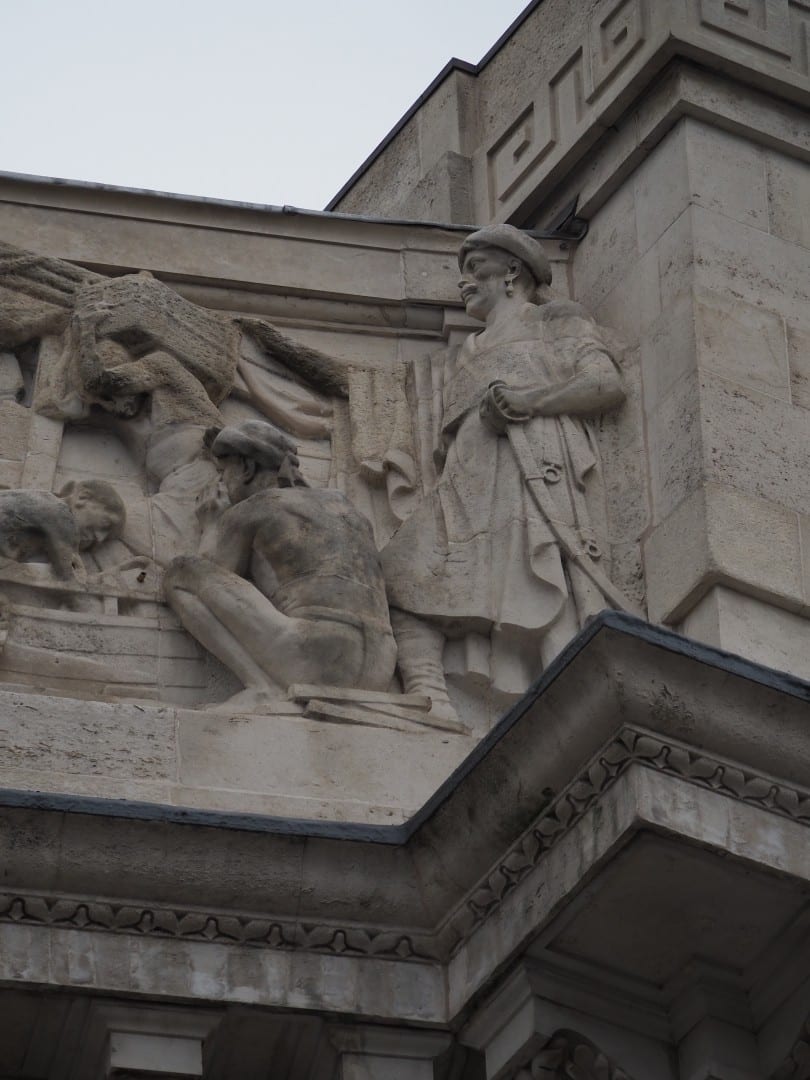 to the row of Oriental seated men along the bronze balustrade.

One of Liberty’s key selling points when they opened was luxurious exotics products and so the building nicely complemented this aim. From my understanding I think Liberty may still own the lease of the Regent Street site but let it out to other shops.

It may come as a surprise from first glance at the huge panes of glass, but the Apple store is one of the oldest buildings on Regent Street, built in 1898 by G.D. Martin. 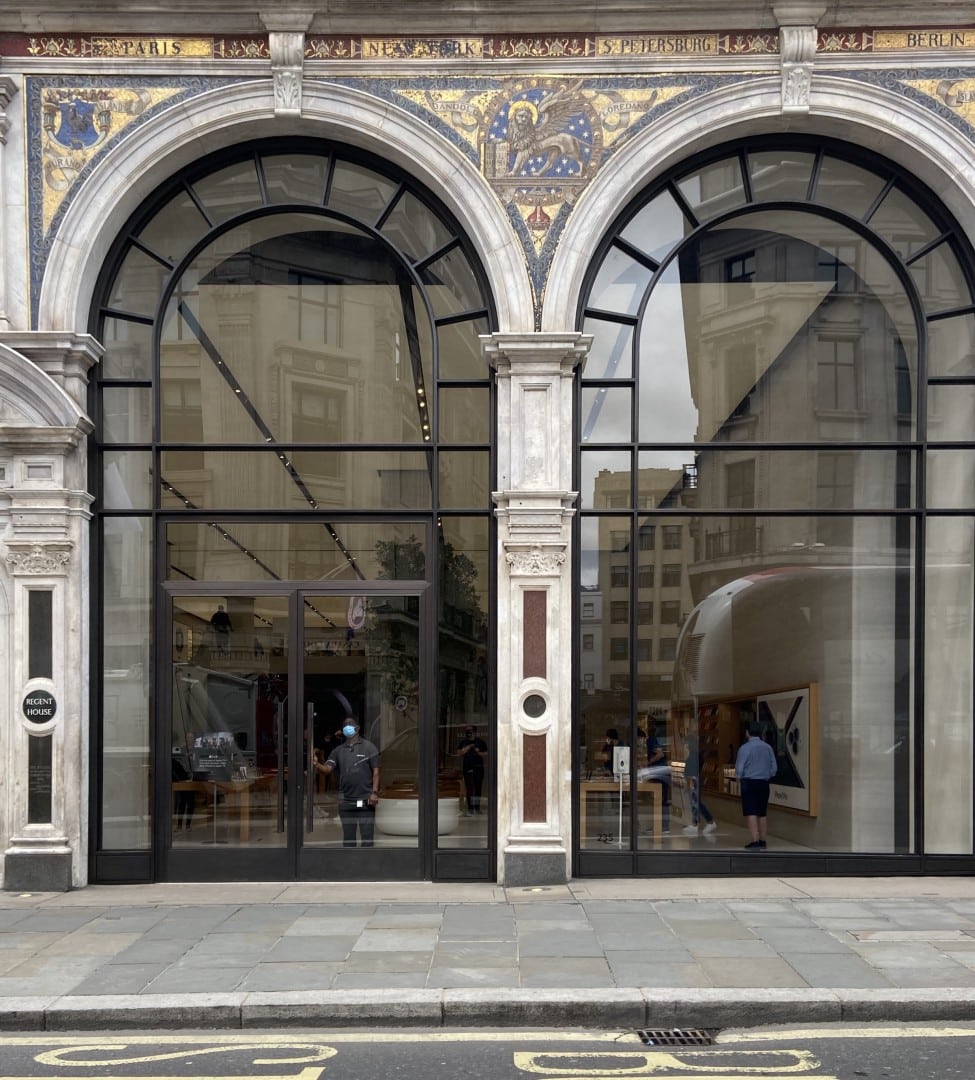 The real delights are the mosaics, produced by Salviati & Jesurum of Venice, the foremost mosaicists in Victorian England whose work can also be found in St Paul’s Cathedral and on the Albert Memorial. 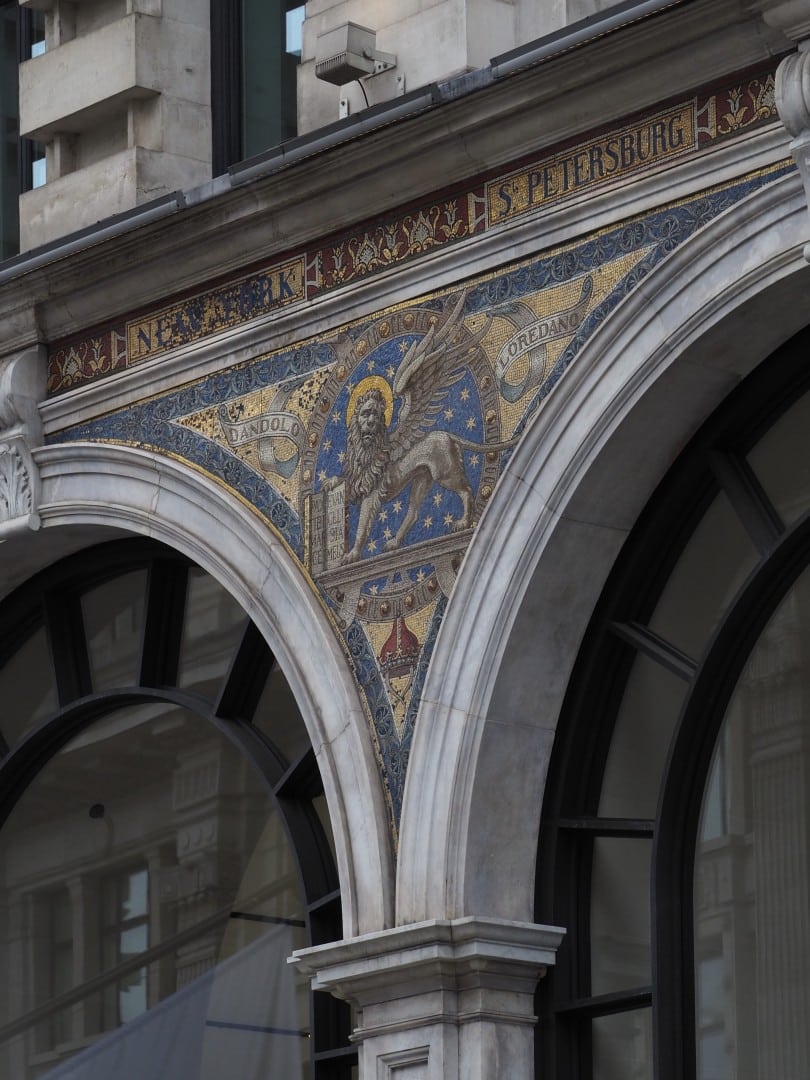 Formerly the Company’s showroom, the spandrels have details of the City of London, Westminster and British Royal Arms as well as Italian nods to the islands of Murano, Venice and Burano, famous for its glassware.

Today 224-244 is H&Ms Regent Street flagships (confusingly it has two other shops on Oxford Street). Originally though it was the Dickens and Jones Building (Henry Tanner, 1919-21). 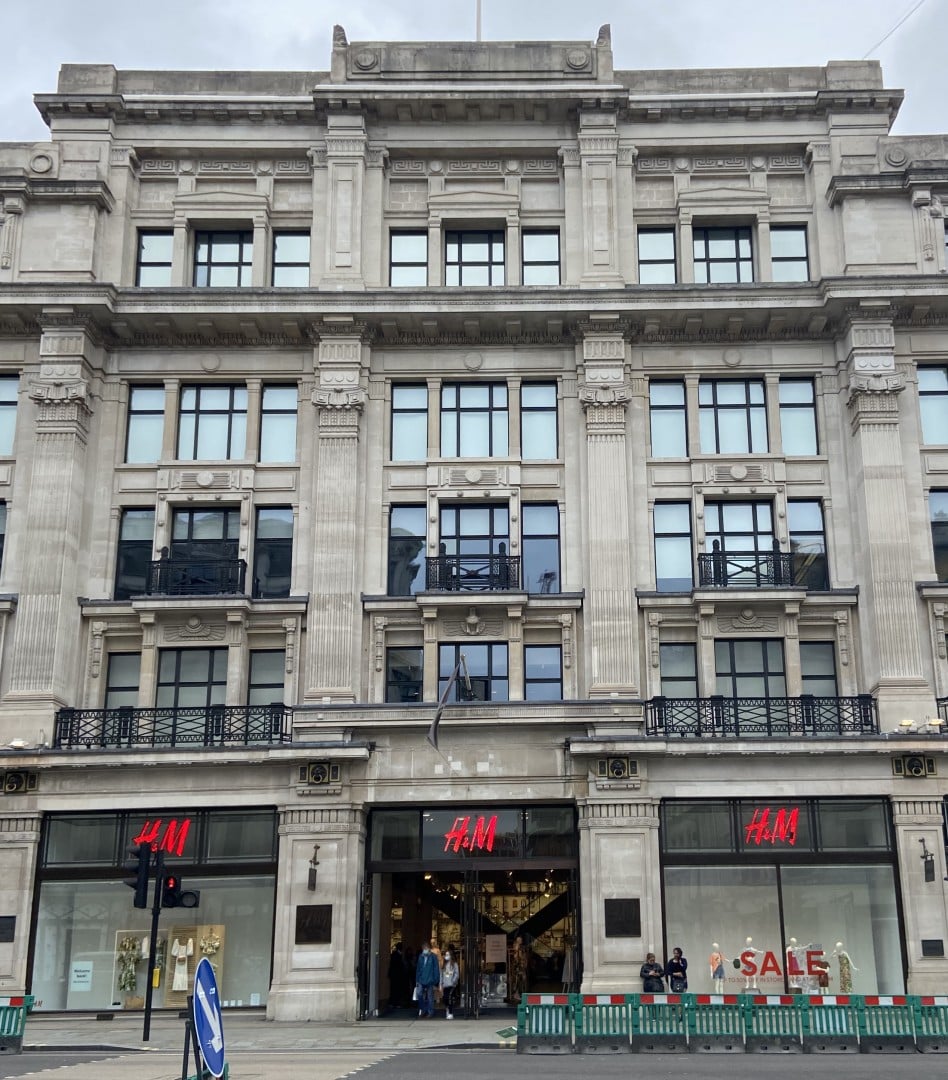 If you look closely, the building is covered with Egyptian-inspired details, common in early 20th century buildings. Later there was a boom in these stylistic details across fashion, jewellery and art when Tutankhamen’s tomb was rediscovered in 1922.

One particular thing to notice is the Nemes; a headdress worn by Egyptian Pharaohs. 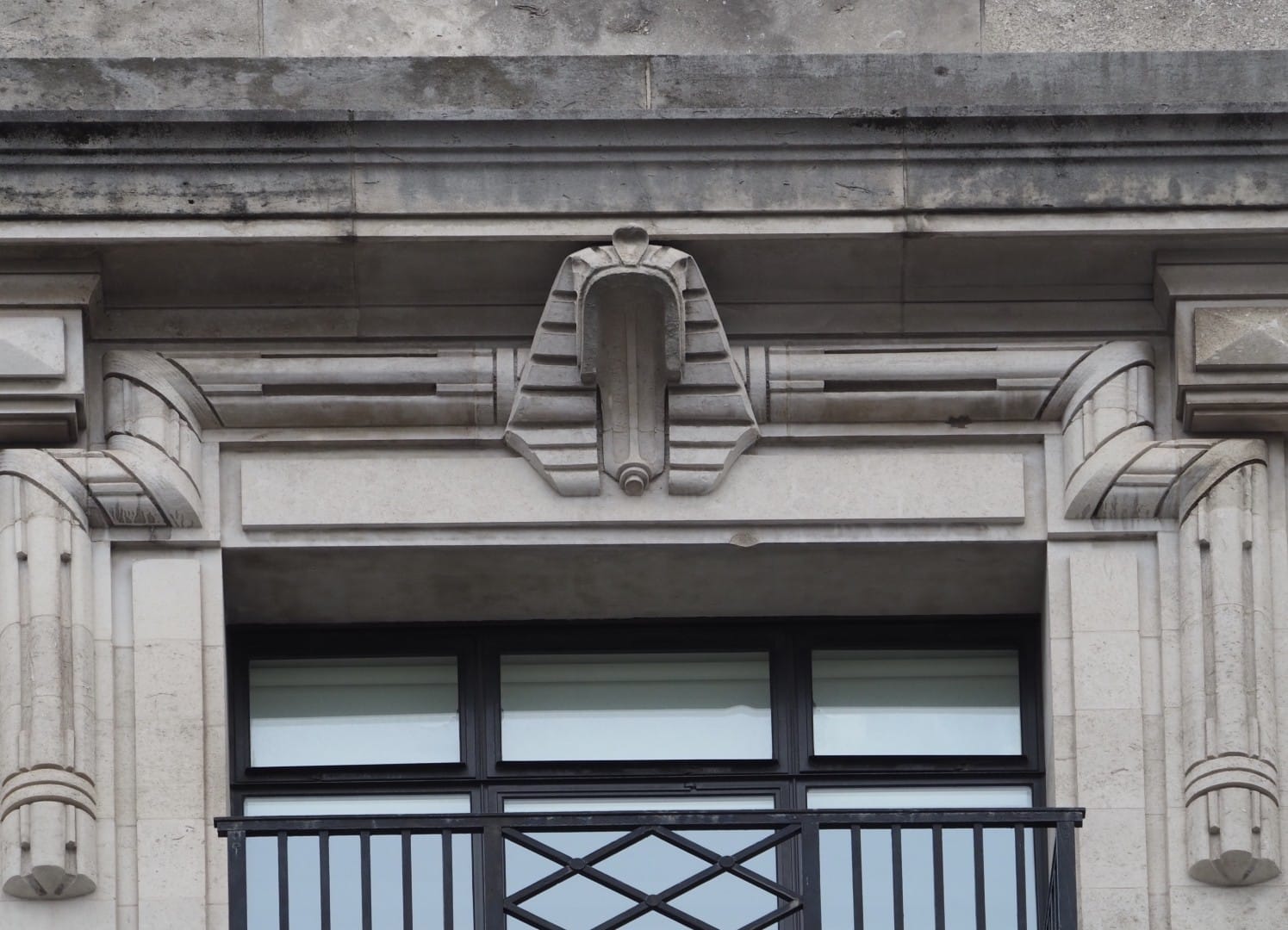 I couldn’t resist adding in this curious site along Regent Street, one of a few lone columns you can see along the street. 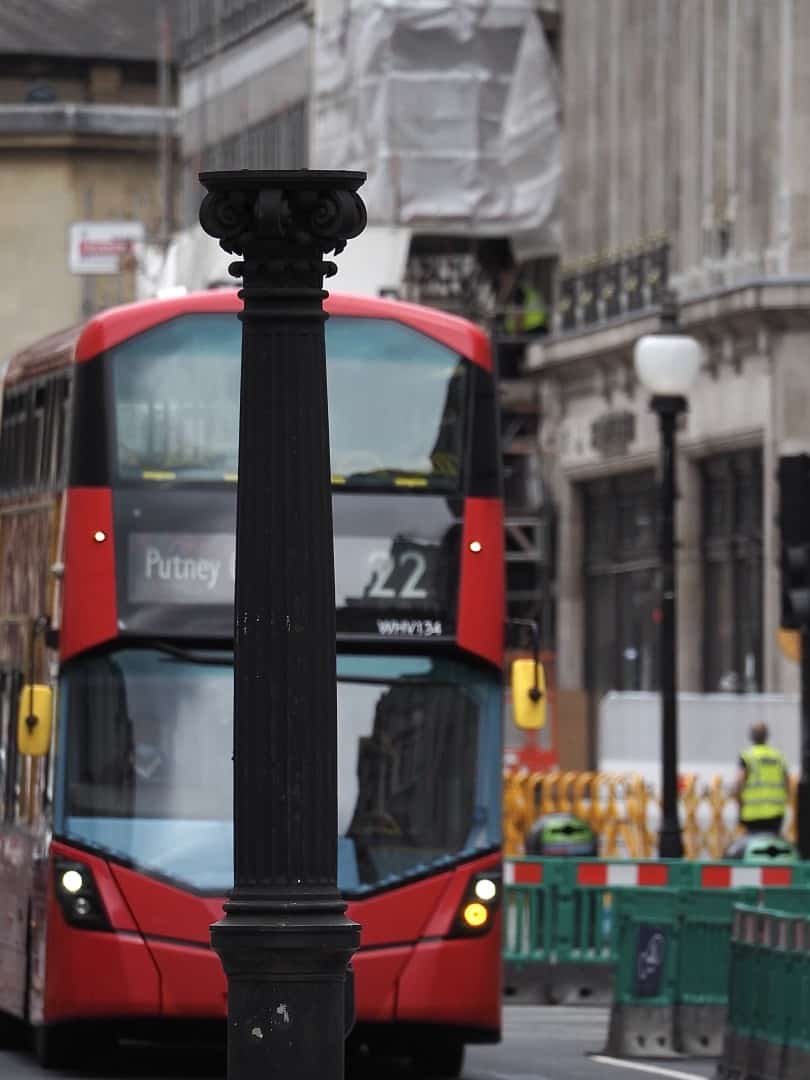 They are Victorian stink pipes that provide ventilation for the sewers (and sometimes former public lavatories) below.

Finally, just as Piccadilly a circus allow a point for the street to change direction, All Souls Langham Place is a perfect pivot for the continuation onto Portland Place. 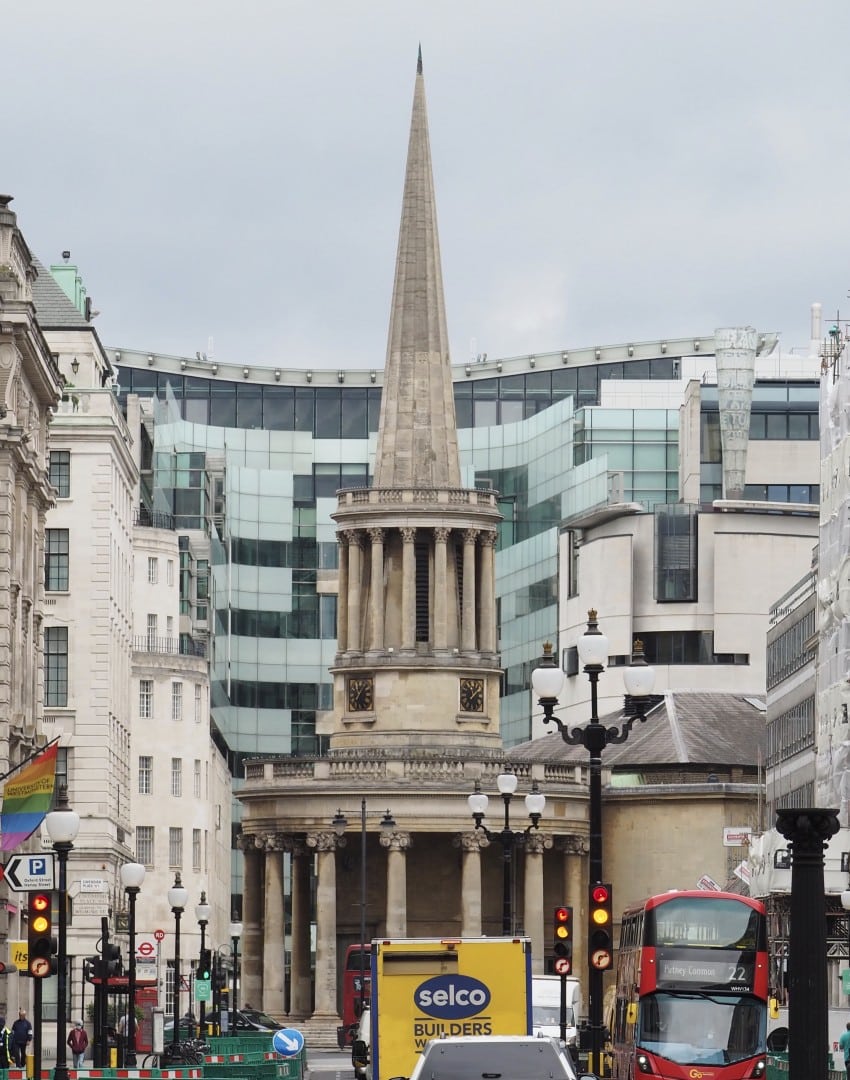 Designed by Nash and untouched by changes, it’s a surviving piece of the first Regent Street.

Have you noticed these little details of history along Regent Street? Next time you’re there have a look up to see what else you can spot!