Hidden Details on the Royal Exchange

What we see today, standing proud at Bank Junction, is the third Royal Exchange on this site. The first was formed by Thomas Gresham in the 1560s.

It was a wonderfully simple plan. Previously merchants haphazardly met on Lombard Street. But Gresham – inspired by the Antwerp bourse – set about creating a central meeting place for trade.

The Exchange gets its ‘Royal’ title after Queen Elizabeth I opened the original in 1571.

ER stands for Elizabeth Regina – Queen Elizabeth I, while VR is Queen Victoria, who opened the current building.

If you’re curious about the first Royal Exchange, thankfully we can see what it looked like in this 17th century engraving from Wenceslas Hollar.

Rebuilt after the Great Fire of London, the second Royal Exchange is shown right at the top of a cast-iron water pump on Cornhill which dates from 1799.

And look up above the clocks hanging onto Cornhill and Threadneedle Street to see the old exchange depicted in the coat of arms!

The second one lasted until 1838 when it burnt down again.

On a totally unrelated note, I can’t resist mentioning that Bridget Jones’ Diary fans might recognise it in the background of the final scene of the film!

William Tite eventually won the commission for the third and current Royal Exchange.

Completed in 1841, it’s worth paying special attention to the pedimental frieze by Richard Westmacott, Junior.

Standing in the centre is an allegorical figure of Commerce.

She is flanked by an array of  international merchants, depicted in exotic dress and bringing a variety of objects into the City of London.

A figure which deserves closer attention is kneeling on the right hand side. He is African and stands out as the sole person kneeling, gazing upwards. He is still and patiently waits, while the other figures conduct business around him.

This frieze was completed in 1844 – eleven years after slavery had been abolished in the British Empire – but in various descriptions this man is called as a slave.

It’s also impossible to separate the Royal Exchange from the slave trade (as pointed out in Historic England’s report). Sir William Garrard – described as a ‘pioneer’ of the English involvement in the slave trade was a financial backer to Gresham’s plan. The building’s function meant it was deeply linked with the commodities, merchants and insurance underwriters profiting from the business.

We will probably never have a concrete reason as to why he was included and singled out like this, but if you’re interested in more, I first noticed him after David Olusoga pointed it out in his fantastic book; Black and British.

In front of the Royal Exchange is an Equestrian statue of the Duke of Wellington, erected 1844. According to the plaque on the base, it was a gesture of thanks from the City after the Duke’s help in passing the London Bridge approaches Act (1827) leading to the creation of King William Street.

But look a little closer and the statue is hiding a secret. It doubles up as a vent, pushing out hot air (a good place to stand on a cold day!) Presumably this was a later addition for Bank Underground Station, similar to the statue of James Greathead (1994) which hides a large vent too!

Also worth a second look in the forecourt are the 12 lampposts, each representing one of the ‘Great Twelve’ Livery Companies of the City of London.

At the base of each are the coat of arms indicating the respective Companies; (in order of precedence) Mercer’s Grocers, Drapers, Fishmongers, Goldsmiths, Skinners*, Merchant Taylors*, Haberdashers, Salters, Ironmongers, Vintners and Clothworkers.

* Skinners and Merchant Taylors switch between 6th and 7th place each year.

Many thanks to Richard who emailed me the picture for inclusion

On the North side of the Exchange there are two further statues of City grandees, Lord Mayor Richard – Dick – Whittington;

and Hugh Myddelton – Chairmen of the New River Company. Both from 1844.

As the founder, Thomas Gresham understandably dominates the Royal Exchange decoration. But some depictions are sneakier than others.

Starting with the obvious, on the back (East) side is a fine statue of him – showing of some shapely legs!

Either side of this you can spot his coat of arms and a Mercer’s Maidens (he was a member of the Worshipful Company of Mercers).

Looking right up above the Royal Coat of arms on the West entrance, you can also make out his initials, just below the flowery garland.

But the most curious symbol is the golden grasshopper.

Perched on top (and depicted in stone on one side) the grasshopper was Gresham’s heraldic symbol. It’s also depicted on Lombard Street on the site of his former home.

According to Pevsner, this one is thought to have been taken from the second Royal Exchange, making it late 17th century. Surely it must’ve been re-gilded since then though?!

Inside the Royal Exchange

Trading at the Royal Exchange was dwindling from the outbreak of WWII, formerly ending when the London International Financial Futures Exchange moved out to Cannon Street in 1991.

After an extension refurbishment its now a luxury shopping centre, a glass ceiling replacing a barrel-vaulted one. It’s a nice reminder that until 1883 it used to be an open courtyard.

Today the central space has a bar and cafe from Fortnum and Mason.

With the courtyard closed to the elements, 24 murals were also installed from  1892. Unfortunately, with the addition of a mezzanine level and restaurant installed, they’re now partly obscured. I will try to get inside when I can to update you with images, but for now you can view the paintings here.

Each Wednesday morning I send the latest London history blog post, news and inspiration. If that sounds like your cup of tea, sign up using the box below! 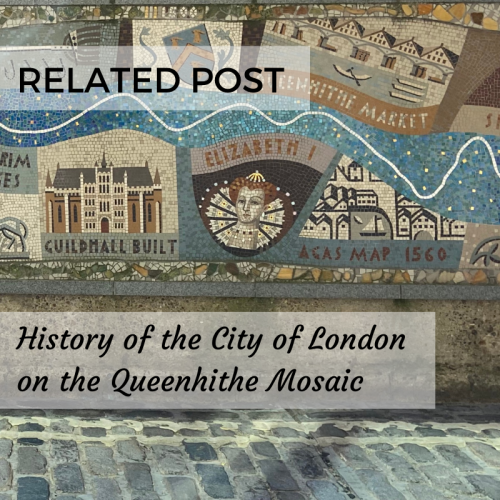