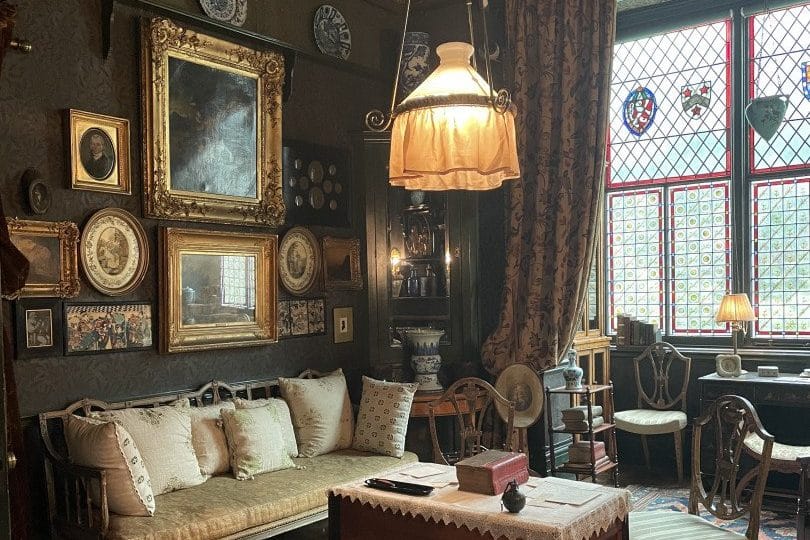 I was recently invited to a preview of Sambourne House, the family home of Linley Sambourne. You can find it at 18 Stafford Terrace and by stepping inside you enter a Victorian Time Capsule.

Edward Linley Sambourne (1844-1910) was an illustrator and cartoonist. From a young age his talent as an artist was noticed but he didn’t have much formal training. At 16 he spent a few months at the Kensington School of Art but was then apprenticed to Marine Engineers based in Greenwich. They spotted his abilities and he moved to the Drawing Office.

His big break came in 1867 when the Editor of Punch, the satirical magazine, saw his sketches and offered Sambourne his first commission, aged 23.

He progressed from initial letters at the start of articles, then to vignettes and finally to fully illustrated cartoons. Punch Magazine is credited with coining ‘cartoons’ in the way we understand them today and by 1900 Linley Sambourne was their Chief Cartoonist.

His style was celebrated for its intricate details, couple with the well-oserved poses and expressions of his characters. He was also an early adopter of photography, using models (and often himself!) to better capture the human form.

In 1874 Linley had married Marion Herapath and the pair moved into 18 Stafford Terrace. The house was part of the Phillimore Estate, north of Kensington High Street. This was close to Marion’s family but for Linley the area held a further draw.

Kensington was an attractive neighbourhood for him due to its artistic reputation. The most famous artist’s home and studio is Leighton House, also managed by the Royal Borough of Kensington and Chelsea and only a short walk away.

No.18 was built along with the rest of Stafford Terrace in 1868. It had been lived in before the Sambournes arrived and so before the big move they organised its decoration in the Aesthetic style.

18 Stafford Terrace would be home for the Sambournes and their two children for their whole lives. The last resident was Anne, Countess of Rosse and their granddaughter who preserved the house as a museum.

The Aesthetic Movement was a move away from industrialised manufacturing, instead focussing on the handmade, richly decorative and beauty of individual objects. It’s very much a more-is-more style (minimalists may struggle to see past the ‘clutter’!) and the slogan for the period is ‘Art for Art’s Sake’.

One of the champions of the movement was William Morris. His oft-quoted phrase from 1880 is “Have nothing in your houses that you do not know to be useful or believe to be beautiful.” Clearly there were a lot of things the Sambournes found beautiful.

A first move by the Sambournes was to have the whole house decorated with William Morris wallpaper. This was replaced over the years as fashions changed and it’s lovely to see the reveal of layers as mirrors and frames have been moved.

The house was celebrated the couple’s lifetime as an artwork in its own right, Linley said in an 1893 interview that “what you see is the very best. That has been my principle throughout: not to buy anything that was not really good.”

Given the style – and the fact that an inventory of all the art and furnishings stretches to the tens of thousands – the experience of walking through this house can be somewhat overwhelming.

I therefore thought it would be fun to share some of the smaller details, things that are redundant or surprising today, but were typical in a middle-class Victorian home or are very particular to Linley Sambourne.

The Sambournes were a typical urban, middle-class family and so it was usual for such a household to have 3-4 servants. If we take Marion’s 1912 as an example, she employed three servants full time, a cook, housemaid and parlourmaid. The parlourmaid was the senior of the maids with a smarter uniform who would greet guests at the door.

The servants’ bedroom was used by the housemaid and possible the parlourmaid too. It’s noticably starker than the rest of the rooms and even more so when you appreciate the wallpaper is a 1960s addition. The original walls would’ve simply been painted a plain colour.

A typical day for her would involve hard manual work from 7am to 10pm including dusting, polishing, having family members’ clothes laid out, bring up and clearing away meals, lighting fires and clearing out fireplaces. This is by mo means an exhaustive list and doesn’t take into account as set days in the week for a full linen wash, brushing the upholstery and scrubbing out the pantry.

Marion prided herself in running a well/oiled and happy household and testament to this is that her cook, Emma Reffell, stayed with the family for 25 years and one Swiss Parlourmaid – Marie Allebach – was with the Sambournes from 1907 right up until their son Roy eventually died in 1946.

Look up in the Maid’s room and you can spot a bell. Evidence of a network of bells can be found throughout the house, including a long row in the basement.

The method of ringing the bells are – naturally – a bit more aesthetic. Ranging from attractive handles set discreetly into the walls, to long ropes hanging from the bedroom ceilings. After all you wouldn’t want to reach to far out of bed!

Menservants were taxed heavily from 1777 so female servants were far cheaper by the 19th century. Nevertheless, Linley kept a groom and licensed a carriage for some years while living here.

Charged with attending to the stables and horse as well as driving their carriage, the groom would also get involved with photoshoots! I’m not sure if its recorded whether he enjoyed this task or not! Dotted around the house there are a couple of very strange devices used by the Sambourne’s to call their groom. Linley could use these inbuilt ‘phones’ to rely a message via the pipes down to the stables.

As you ascend the upper levels of the house you also notice the change in decoration. As we reach the nursery the rich carpet abruptly changes to cheaper lino.

This attractive fern case was added by Linley after a few years of moving in. He replaced the external window panes to create an in-built conservatory for some plants, a popular feature for Victorian households in the wake of Charles Darwin’s ‘On the Origin of Species‘ published in 1859.

I suppose the house plant boom post-covid is just the latest iteration of this home decor trend.

Although not a specifically Victorian detail I loved that one of Linley’s collecting obsessions was ornamental walking sticks.

Sadly all but two of his collection were stolen in the 1980s, but the the majority of the sticks visible here were donated by visitors and volunteers. The only surviving two original ones are on the very far right.

In the Dining Room is a gorgeous upholstered box containing exquisitely labelled liquor.

Linley and Marion entertained a lot and Linley kept a diary which often reports feeling  ‘seedy’ or ‘bilious’ after one of their frequent dinner parties.

As we’ve seen with his love of photography, Linley was an early adopter of the latest technology. So in 1896 when electric lights became available he leapt at the opportunity to convert the house’s light switches.

If you’re curious about the world’s first house lit by electricty. That honour goes to Cragside in Northumberland, owned by the National Trust.

Their original Victorian bath tub had an alternative purpose. If you look at the adjustable shelf, this is the clue that this room was used by Linley to develop his photographic prints.

The shelf was a useful feature for mixing the chemicals and the bath was the large receptacle used for rinsing the print post-developing.

Marion wasn’t keen on washing with all those chemicals so she preferred to take a bath in a portable tin tub in her bedroom. I feel sorry for the servant hauling all those bowls of hot water up the stairs!

The last thing I spotted on leaving this magical time capsule was a tiny detail on the front door. Painted in Linley’s favourite dark olive, there’s an adjustable slot to the left of the door handle.

Viewed from the front it displays the simply message; Mr Linley Sambourne not at home.

It must’ve been a handy way of letting callers know he wasn’t available. However today when you visit Sambourne House it’s hard not to feel his presence in every element of the building.

Sambourne House is open to visitors from 15 October 2022 and open Wednesday-Sunday for general visits (adult tickets are £11). You can also arrange guided tours on Mondays. See the RBKC website for more information about visiting Sambourne and Leighton House