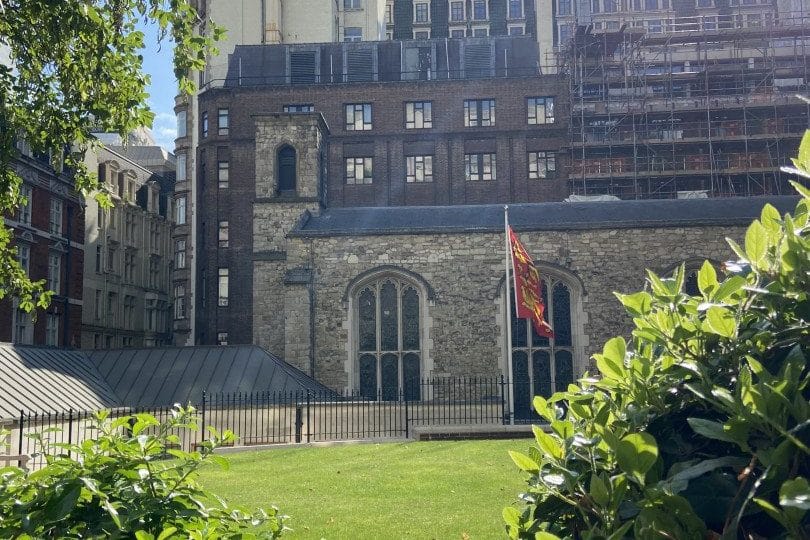 Just off the Strand you can find an amazing historic survivor. Today the Savoy Chapel is hemmed in by taller buildings but, if anything, that kind of adds to its appeal and charm…

With parts dating back to the 16th Century (and earlier!) the Savoy Chapel is free, open to visitors and well worth a look inside.

History of the Savoy Chapel

Strap yourself in because this is fairly complicated…

It all began as a Palace (next door to Somerset House which gives you and idea of the scale and grandeur). It was originally built in 1245 for Simon de Montfort, Earl of Leicester, who led a revolt against King Henry III with fellow peers of the realm, effectively putting him in charge.

The name comes from Count Peter of Savoy who bought the palace in 1263 and whose likeness can still be seen over the entrance of the Savoy Hotel.

After a brief stint in the hands of a religious order it passed to John of Gaunt (younger son of King Edward III) who became Duke of Lancaster.

In the 14th century John of Gaunt rebuilt the palace, only to have it destroyed during the Peasant’s Revolt of 1381. All the ruins were cleared away and by 1515 it was replaced by a hospital founded by King Henry VII for the “pour and nedie”.

The chapel today was once one of three on the large site. The term ‘hospital’ shouldn’t be considered as a purely medical institution as it is today, but rather a hostel, offering aid and shelter for Londoners in need.

As a religious order it was dissolved by King Henry VIII in 1553, then re-founded 1556 by Queen Mary I. It fell into disrepair during the next few decades, was repaired and restored under King Charles II in 1670 then finally dissolved for good in 1702.

Inside the Savoy Chapel

Grade II* listed, the main fabric of the Savoy Chapel is from 1510-16. The only exception being the south wall and bell turret, amended by Robert Smirke c.1830.

The interior and ceiling were gutted by two disastrous fires in quick succession; 1843 and 1864 so the chapel was restored by Sidney Smirke (brother of Robert) in 1864.

The ceiling was designed by Thomas Willement, a stained glass artist who was apparently working from the Tudor original. Until relatively recently it was all whitewashed but in the last couple of decades has returned to a startling blue (believed to be closer to the original 16th century design)

It suffered further damage during The Blitz and was altered by A.B. Knapp-Fisher in the 1950s but it’s still possible to find very old details…

There are two fragments of monuments, saved after the 1864 fire, which can be found either side of the alter. They would’ve once been part of huge funerary monuments, one of multiple figures praying for the departed’s soul.

One depicts Nicola Moray, the wife of Sir Robert Douglas who died November 1612. The other is Alicia, daughter of Simon Steward who died 18th June 1573.

In a side room there is also some Medieval stained glass, probably reset in the 16th century.

Today the Chapel belongs to HM The Queen who is also the Duke of Lancaster (it’s an honour given to the sovereign regardless of whether they’re King or Queen).

Its official name is The Queen’s Chapel of the Savoy and It’s a Royal Peculiar, like Westminster Abbey or the Chapel Royal in St James’s Palace. This means it’s under the direct jurisdiction of the Monarch rather than the local diocese.

There’s a rather wonderful bit of contemporary stained glass celebrating her Diamond Jubilee in 2012. It was designed by Scottish Artist; Douglas Hogg.

It’s also the spiritual home of the Royal Victorian Order, founded by Queen Victoria in 1896. It’s part of the New Years honours list but is specifically given at the monarch’s discretion, so a way for HM Queen to personally thank those associated with the Royal household.

Stall plates showing the members’ coat of arms decorate the interior of the chapel and two colours (flags) hang either side of the Royal family’s stalls. They show the coat of arms of HM Queen on the left and those of the Princess Royal (Grand Master of the Order) on the right.

The Chapel is open to the public from Monday to Thursday 9am to 4pm and on Sunday from 9am to 1pm. Find up to date opening hours here.