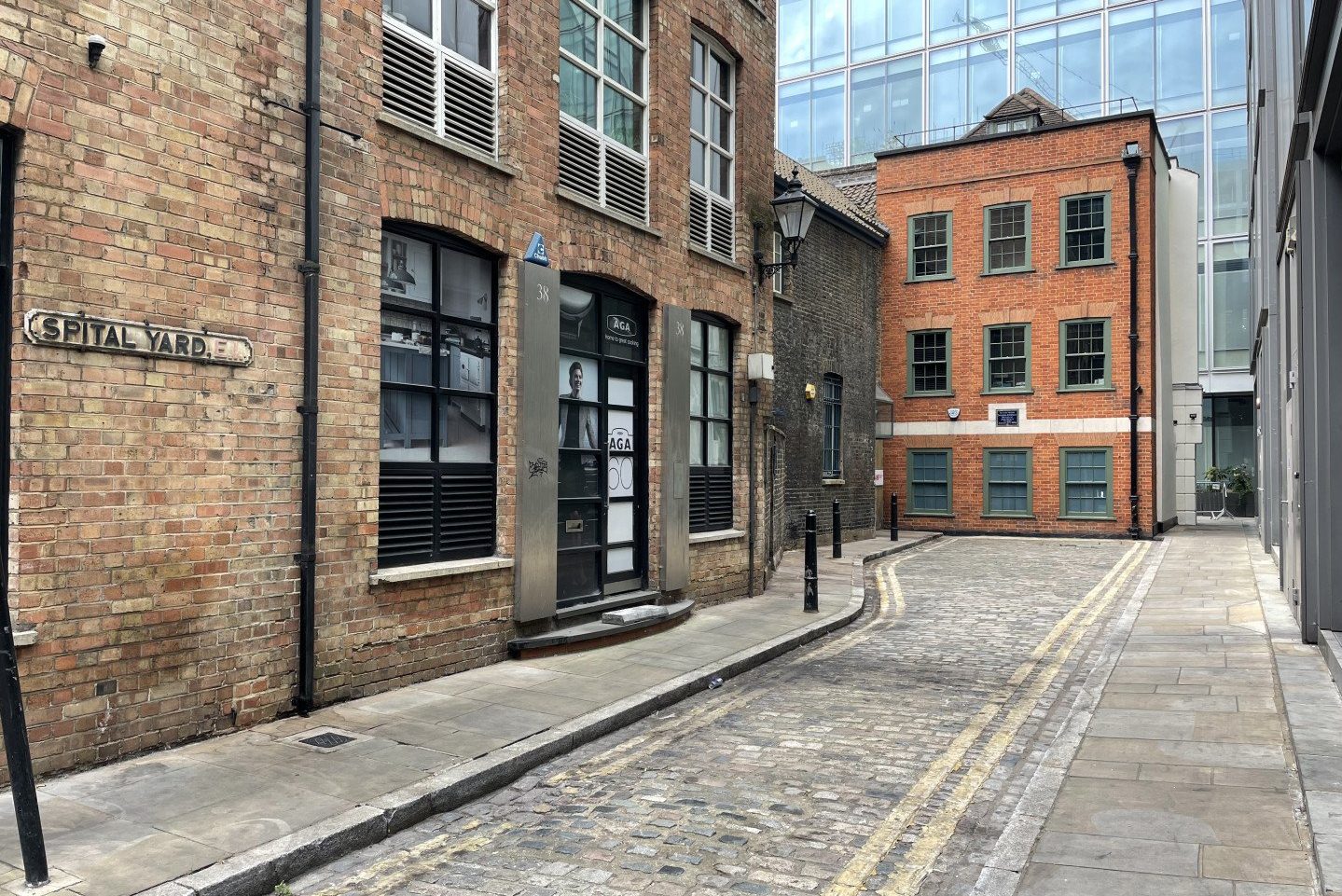 Just off Bishopsgate, the busy thoroughfare with towering new skyscrapers behind, glance down Spital Yard and you seem to have stumbled back in time.

Given a closer look, this Georgian townhouse isn’t quite as authentic as it might appear. However it still has plenty of interesting history behind it.

The huge church site can be visualised on the Layers of London Tudor map (showing c.1520) and I’ve circled the rough site of Spital Yard today in yellow.

In 1539 following the Dissolution of the Monasteries under King Henry VIII the church was demolished and its may buildings had been repurposed.

The house on Spital Yard has been given a new, brick, 20th century facade in the style of the surrounding c.1720s townhouses.

Whether any older building fabric survives is hard to judge. Dan Cruikshanks in Spitalfields describes it as ‘much-altered and mutilated’ but speculates that it could contain fragments of the south transept of the priory wall of St Mary Spital.

In any case it’s a City of London Corporation blue plaque that piqued my interest.

More recognisable under her married name; Susanna Wesley. She would become known as the ‘Mother of Methodism’ thanks to her son; John Wesley.

However, she was an equally formidable and accomplished woman in her own right. Born in 1669, she was the youngest of 25(!) children. Her father was a Dissenter but she left his non-conformist church and married the Anglican minister Samuel Wesley aged 19 in 1688.

In total the pair would have 19 children but tragically only 11 survived beyond infancy. Her husband Samuel struggled financially throughout their life and left her periodically to manage the family and household. This she took in her stride, home educating all the children – including the girls – as well as finding time to write her own thoughts and commentaries on theological matters.

Her work ethic and intelligence clearly left a mark on the young John Wesley because at the age of six he couldn’t comprehend ever finding a woman to marry like his father had. It seems John was also a favourite because of his narrow escape from a house fire in 1709. Susanna must have believed God had a special intention for John and given the number of followers his movement attracted it seems she was right.

Susanna died in 1742 aged 73 and is buried in Bunhill Fields, a 12 minute walk from Spital Yard.

I run two public tours in the Spitalfields area, the first is all about the changing social history an human stories; The Spirit of Spitalfields and the other is The Feminist Jack the Ripper Walk, a tour which brings the focus onto the women killed during 1888. We talk about their lives, the social context as well as other inspiring East End women past and present.