One of my favourite places to have a wander (or take people on tours!) is Spitalfields. Especially the 18th Century streets of Elder, Fournier, Wilkes and Princelet.

And some of the little details that I think capture the history and eclectic nature of the area are its door knockers! 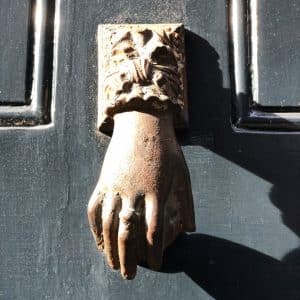 The classic English door knocker can trace its history back to Ancient Greece. I’m no door knocker history expert but I’ve read that slaves were chained to heavy rings attached to front doors in order to greet guests. So far, so horrible.

The Romans continued this tradition and it spread across their Empire. However, not everyone had a slave to spare, so that part thankfully died out.

Back in England we start seeing door knockers on wealthy folks houses from the 16th century, but there are very early examples including this one in the British Museum, dating from 1200 and thought to be a church door knocker, found in Essex! 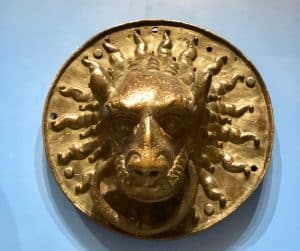 The lion is a popular motif for doors – symbolising protection as well as embodying England itself. Most famously, it features on the front of No.10 Downing Street. 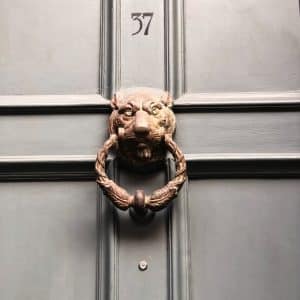 Another popular Spitalfields Door Knocker is the Hamsa, or Hand of Fatima, a symbol of protection which originates in Islam (Fatima was a daughter of Mohammed) but has since been adopted by Judaism and Christianity to ward or evil forces. 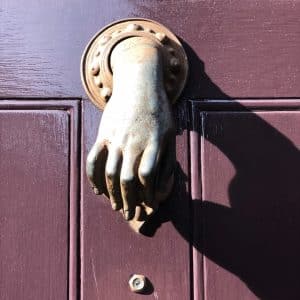 In the 18th Century door knockers would’ve been relatively simple but the Victorians into the 19th Century favoured more elaborate designs. 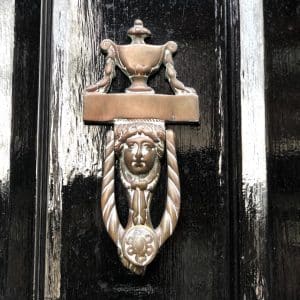 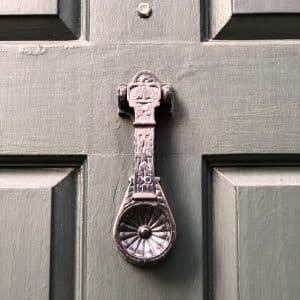 Some of the knockers can be compared to a 1930s catalogue of Crowden & Keeves’ hardware suppliers. The Spitalfields Life blog shared them here, proving the lang-lasting quality of the makers! 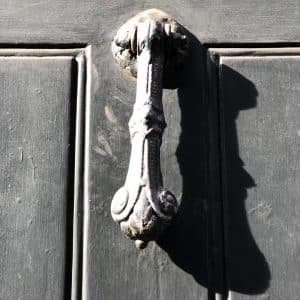 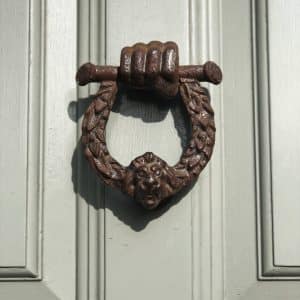 Today it’s hard to tell by sight when the knockers date from, but they’re wonderful things to look out for when you’re walking through Spitalfields!

Want To Explore More of Spitalfields?

Full of contrasts and known as the “cradle of migration”, Spitalfields is place of constant change with an ancient history. Placed on the fringe of the encroaching City we will discover the past, present and future of this bustling area of London.

You’ll see the human story of Spitalfields, exploring what life was like for residents through the ages, why there’s a street called Frying Pan Alley and walking the routes of Jack the Ripper’s victims. Starting near Liverpool Street Station, this won’t just focus on poverty and crime of the area, this walk will highlight the perseverance and truly uplifting spirit of the East End.

See upcoming dates and book below!