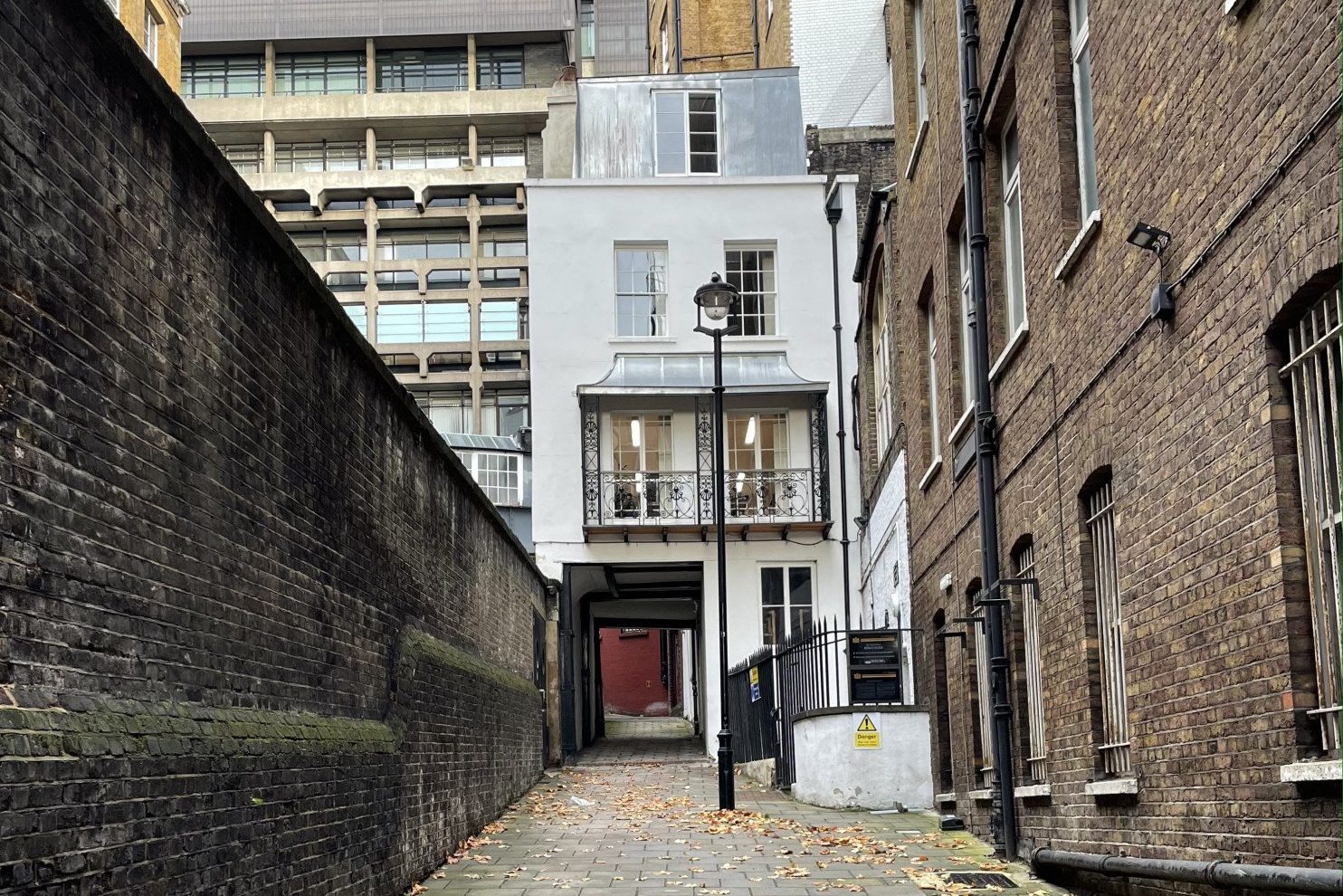 For the everyday passerby, there’s not much reason to venture into Strand Lane. It’s not a convenient cut through to the Strand however it has two quite amazing bits of history to discover!

I’ve previously covered one of them on the blog, the history of the ‘Roman’ bathhouse which you can read all about here.

But there’s another historic oddity, a curious-looking white building that looms over the narrow street.

The Grade II listed structure looks fairly new (it was renovated and re-rendered in 2017) but the balcony have more of an early 19th century look.

The Calendar of Treasury Papers (which list detailed government accounts) from 1724 mention a ‘tenement … built across the lane’ which is inhabited by a beadle from the parish of St Clement Danes.

Although it’s not pictured on the 1799 Horwood map, I’ve circled the rough location and it would’ve been up against part of Somerset House’s grounds (which fits with the history of the bathhouse too!)

This was a former parish watch house.

Before the Metropolitan Police was founded in 1829, the watch was an organised system of men who kept a literal watch on London, organised by each parish. They used small buildings as a way to stay warm and as overnight lock-ups to keep any ne’er do wells caught misbehaving.

Quite a few of these watch houses and lock ups survive across London. There’s an atmospheric lock up from c.1730 set within a wall on Cannon Lane, Hampstead.

As well as the new chain of coffee shops (named WatchHouse!) which started in a former Rotherhithe watch house, established in 1821.

In the image above from 2019 you can see the former watch house on the right as well as the two statues of children wearing the blue uniforms that tell us this was charity school, this building dates from 1742.

But back to St Clement’s watch house, given it’s slap-bang in between two parishes you can find two fun parish boundary markers either side of the narrow brick alley.

Above is the St Clement Danes parish marker, the anchor being an attribute of Saint Clement. In 100 AD he was martyred by tying his neck to an anchor before being thrown in the sea. Lovely.

The other refers to the Parish of St Mary Le Strand.

On the 1890s OS map with St Clement Danes and St Mary Le Strand circled in red. Strand Lane is highlighted in blue

Today the watch house is now part of King’s College campus and is just used as offices so the interior doesn’t hold much excitement.

The other architectural protrusion into Strand Lane is the apse of the King’s College Chapel. See in the top right below.

This was designed by George Gilbert Scott and completed in 1864. This is certainly worth visiting if you get the chance. I was lucky enough to see inside during one Open House Festival.

Discover more about the history of this area on my Fleet Street Secrets walk. Available dates are shown below.