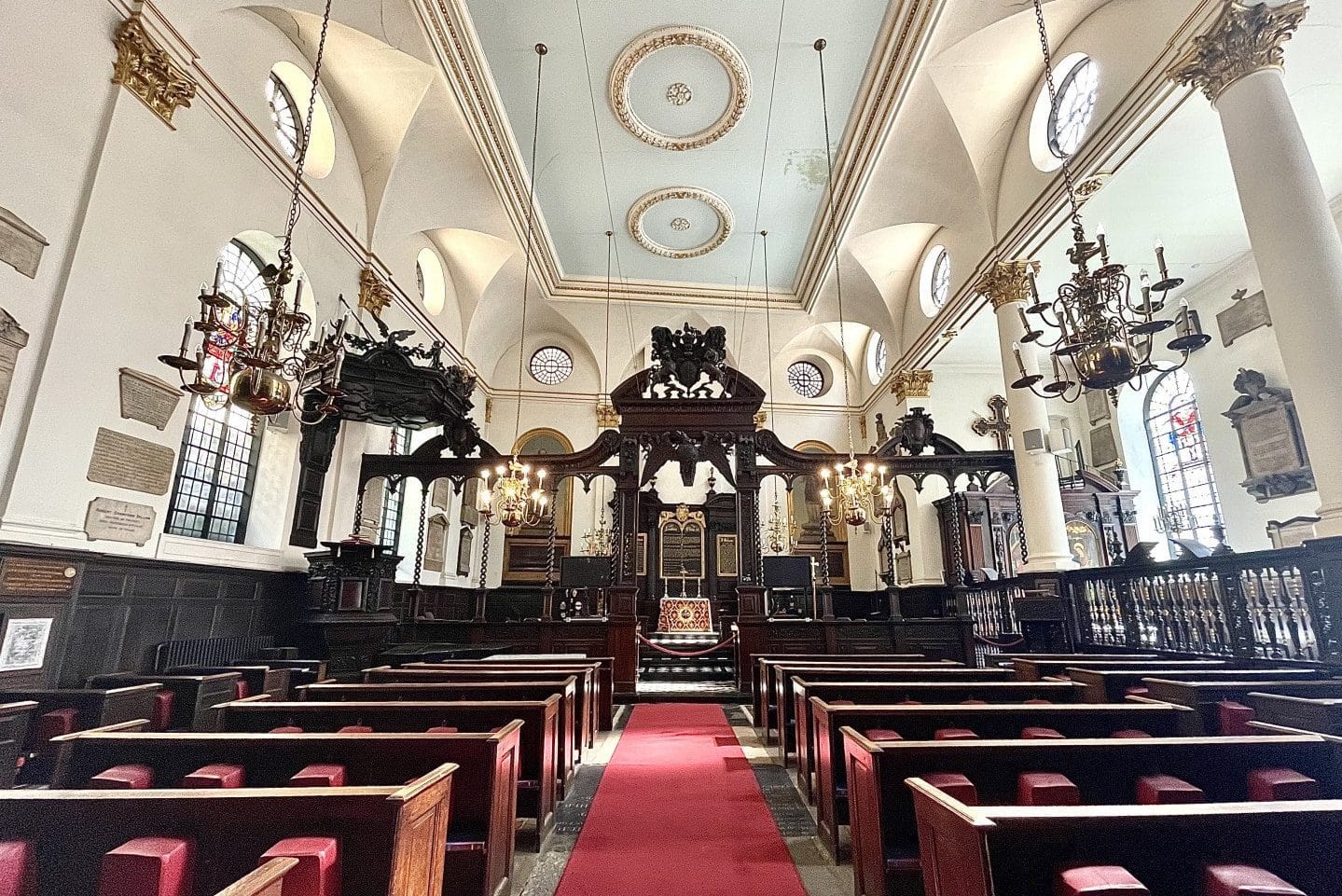 Nestled behind the Bank of England you can find St Margaret Lothbury. It’s easy to miss, hemmed in by other buildings, but if open it’s well worth popping in to admire its treasures and history.

The current building was designed by Christopher Wren, built between c.1680s and c.1690s (there are conflicting dates online) following its destruction in the Great Fire of London.

However, like many City Churches, it has an earlier history.

It was first recorded in 1185, linked with Barking Abbey and the rebuilt in the 15th century.

The person who paid for the building in 1440 was Robert Large a former Lord Mayor of London, Mercer and MP. He’s also notable because William Caxton – first person to introduce the printing press to England – was apprenticed under him in 1437-38.

The church entrance is beneath the tower. This was originally designed by Wren but extensively refurbished in 2018. There’s also a lovely blue clock, also recently refurbished but otherwise – I think! – as old as the tower.

Running alongside the nave there is a chancel which contains a baptismal font believed to be carved by Grinling Gibbons. It has cherub faces on each corner and this scene shown here is the dove returning to Noah’s Ark.

Like many of the things found inside St Margaret Lothbury today, this was originally somewhere else.

The main reason for this is the Union of Benefices Act of 1860, a law which reduced the number of parish churches as congregations dwindled. Many City Churches were demolished and those that survived collected up some nice trophies from surrounding churches.

The font (seen above) came from St Olave Jewry (demolished apart from its tower) in 1887.

Another addition is this startling choir screen, originally in All Hallows the Great, Thames Street which was demolished in 1894.

The screen dates from 1685, donated by the German merchant Theodore Jacobson which I suppose explains the large eagle in the centre.

Either side of the Communion Table are two painted panels of Moses and Aaron. They date from c.1700 and were from St Christopher-le-Stocks, demolished 1781 to make way for an extension to the Bank of England.

In contrast to the many relics inside, the stained glass is modern. It reflects the church’s links with numerous City of London Livery Companies. They include the Glovers, Tylers and Bricklayers, Tin Plate alias Wire Workers, Armourers and Brasiers, Institute of Chartered Accountants and (depicted below) the Scientific Instrument Makers.

History of the Name

Like many names in the City of London, Lothbury is most likely a reference to the trades that once proliferated here.

‘Bury’ or ‘Berie’ and its other variations seem to be an old name for ‘court’ and in his Survey of London John Stow tells us that In the Medieval period this area was known as a place of metal working and founders, complete with the noisy clanging and harsh scratches of metal.

“This street is possessed for the most part by founders that cast candlesticks, chafing dishes, spice mortars, and such-like copper or laton works, and do afterwards turn them with the foot and not with the wheel, to make them smooth and bright with turning and scratching (as some do term it), making a loathsome noise to the by-passers that have not been used to the like, and therefore by them disdainfully called Lothberie.” – John Stow 1598

Thankfully today you’re more likely to encounter peaceful silence inside Margaret Lothbury, that or enjoy the organ music from one of their regular recitals!

St Margaret Lothbury is open Monday-Friday and you can read more about visiting and events here.