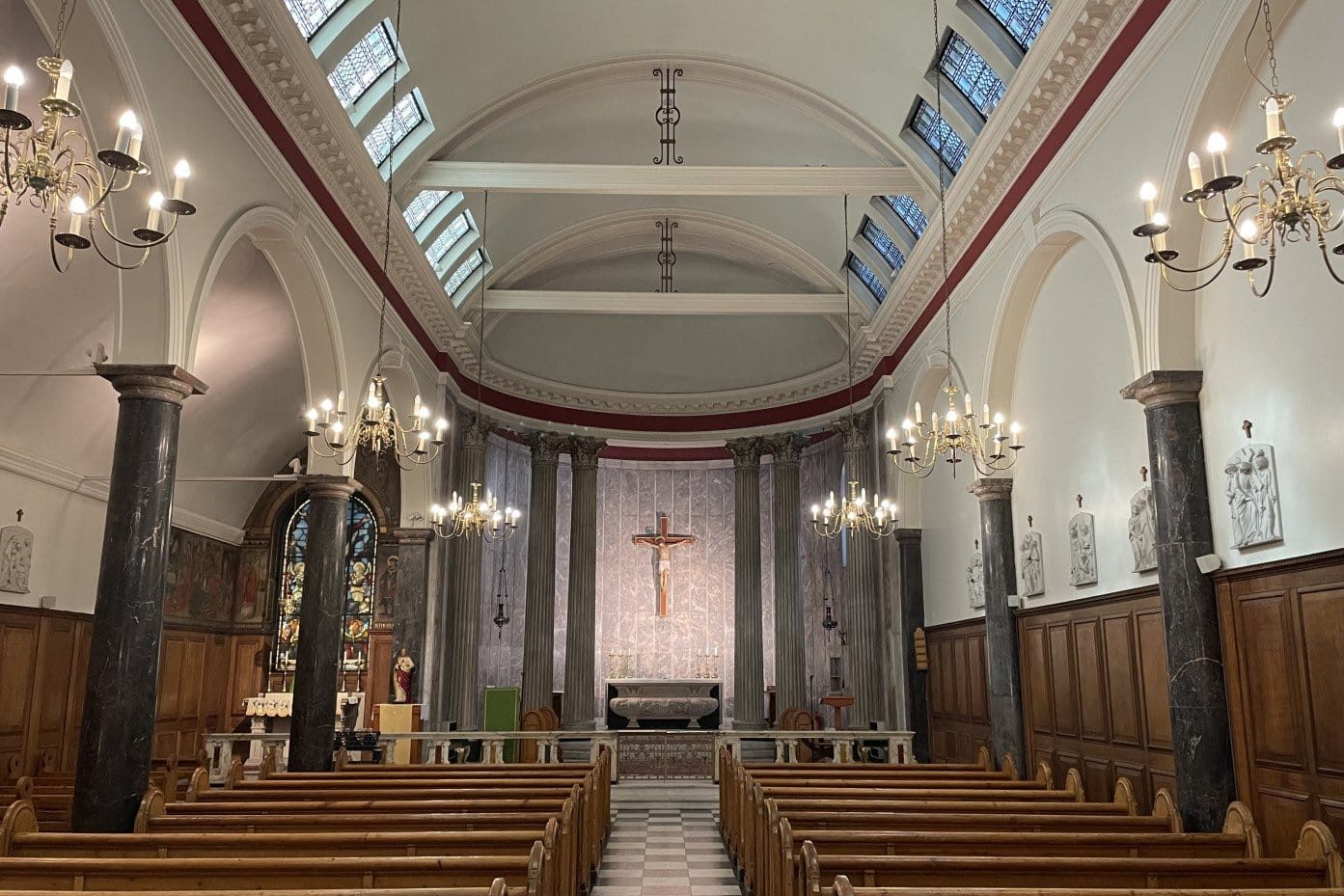 Having visited most of them, I thought it would be a fun long-term project to write about every City Church. There are 43 within the Square Mile (give or take a couple, depending on which you include) and in this post we’re visiting the only Catholic Church in the City of London.

St Mary Moorfields can easily be walked past without giving it a second thought. But it’s worth a little look inside…

Catholics in the City

First, a little historic background. There was once a Catholic Chapel known as the Lime Street Chapel located nearby. It only survived there for 2 years (1686-1688).

In 1688 Queen Mary II and King William III came to power in what became known as the ‘Glorious Revolution’. In ousting the Catholic King James II, these new Protestant heads of state saw the introduction of a law banning any future Sovereign to be Catholic or be married to one. Today, as the monarch is head of the Church of England this still applies, however in 2013 the Succession of the Crown Act removed any barriers to the Sovereign marrying a Catholic or any other faith.

In 1791 the Catholic Relief Act gave some new freedoms to Catholics, allowing them to worship in public and in 1820 the first St Mary Moorfields opened on Finsbury Square. From looking at this image in the London Metropolitan Archives it was quite the church but it was pulled down in 1899.

The two major reasons for this were 1) a dwindling City congregation and 2) a release of funds for the new Westminster Cathedral.

In 1903 the new St Mary Moorfields opened but technically it has only been within the City of London since the boundary lines were amended in 1994.

It’s only really if you’re paying attention (and look up!) do you notice the flags, symbols and sculptures that indicate a Catholic Church.

Set within a fairly uninspiring office building and flanked by two little shops, if you look closer at the facade there are some nice paired relief sculptures. The sculptor of Mary above the door was John Daymond so I assume he also completed the reliefs.

Above depicts (left to right) the Annunciation, I particularly like the dove symbolising the Holy Spirit who’s fluttering just out of shot but whose rays penetrate the scene, and then the birth of Jesus.

Below shows (left to right) the Virgin inconsolable at the death of her son on the cross. His foot with the nail driven through just visible behind. Then the Assumption; Mary rising up into heaven surrounded by angels.

Once inside the interior – though dimly lit – is surprisingly big.

The architect was George Sherrin, he was tasked with building a new (and far less grand) church on the same site. Comparing with the earlier engraving shown above, you might recognise the corinthian columns in the apse at the East End, these were incorporated from the old church.

As well as the main nave, to the left is a side chapel with a stained glass window depicting the Assumption with surrounding paintings showing Catholic Saints.

In the North West corner of the Church is another chapel with a painting pf St Thomas More. Above the doorway is a depiction of his execution including an intimidatingly large axe.

The last thing to mention is the organ, also from the old church, and over 200 years old.

So, perhaps a little underwhelming compared to other City Churches but still a fascinating insight into London’s history and a lovely escape from the relentless redevelopment and clanging building works around Liverpool Street Station.