10 Strange London Memorials and the History Behind Them

Across London we’re lucky to have an abundance of plaques, statues and details to remind us of important figures through history. But not all are straightforward. These are my favourite strange London memorials and – naturally! – the history behind them.

One of England’s greatest architects, Soane is probably most famous for his Bank of England (or what remains of it) and his home-cum-museum in Lincoln’s Inn.

His influence on architecture is undoubted, but in this case he literally has inspired from beyond the grave. Does his tomb look familiar?

Sir Giles Gilbert Scott was inspired by the shape when designing his competition entry for the now-iconic red telephone box.

It would be remiss of me – in a post about graves and memorials – not to mention the most famous London cemetery; Highgate.

Opened in 1839, the ‘Victorian Valhalla’ (as described by John Betjeman) will get its own blog post soon. But for now it’s worth mentioning one of the largest funerals to ever take place there. That of Thomas Sayers (1826-65).

Sayers was a Victorian hero. Not a writer, engineer or politician. But a bare-knuckle prize fighter.

When he died, such was his popularity, that a huge procession of carriages for his fans was organised from his home in Camden to Highgate Cemetery. Riding as chief mourner, immediately behind Sayers, was his dog; ‘Lion’.

Today a sculpture of lion keeps watch beside his master’s tomb.

Also in Highgate is another – actual – lion.

Lions are a common form of allegorical statue you can see across the country, used as symbols of the English monarch since at least the 12th century.

But for the tomb of Mr Wombwell it reperesents an actual lion called ‘Nero’.

George owned a travelling menagerie, starting with a pair of boa constrictors around 1810. However by 1839, he was touring the country with 15 wagons of exotic animals.

It was his wish to be buried under a sculpture of his star attraction; Nero. While other lions were baited (kept in a cage while dogs were set on them) Nero refused, sensibly preferring to sleep. At least now Nero can finally rest in peace.

Graves are often decorated with symbols, a broken column represents a life cut short or an hourglass to represent the passage of time.

But you don’t find too many memorials that are decorated with a bomb.

‘Raised as a protest against the war in the air’ in Woodford you can find the Anti-Air Warfare Memorial, complete with a replica 1930s torpedo bomb.

Designed by Eric Benfield, it was paid for by Sylvia Pankhurst.

Finished in 1935 its – ironically – been subject to numerous attacks, including the same night it was unveiled. Two weeks later the bomb was stolen and then again in 1997. It was most recently restored in 2014.

Designed by Maggi Hambling, the official title for this memorial is ‘A Conversation with Oscar Wilde’. 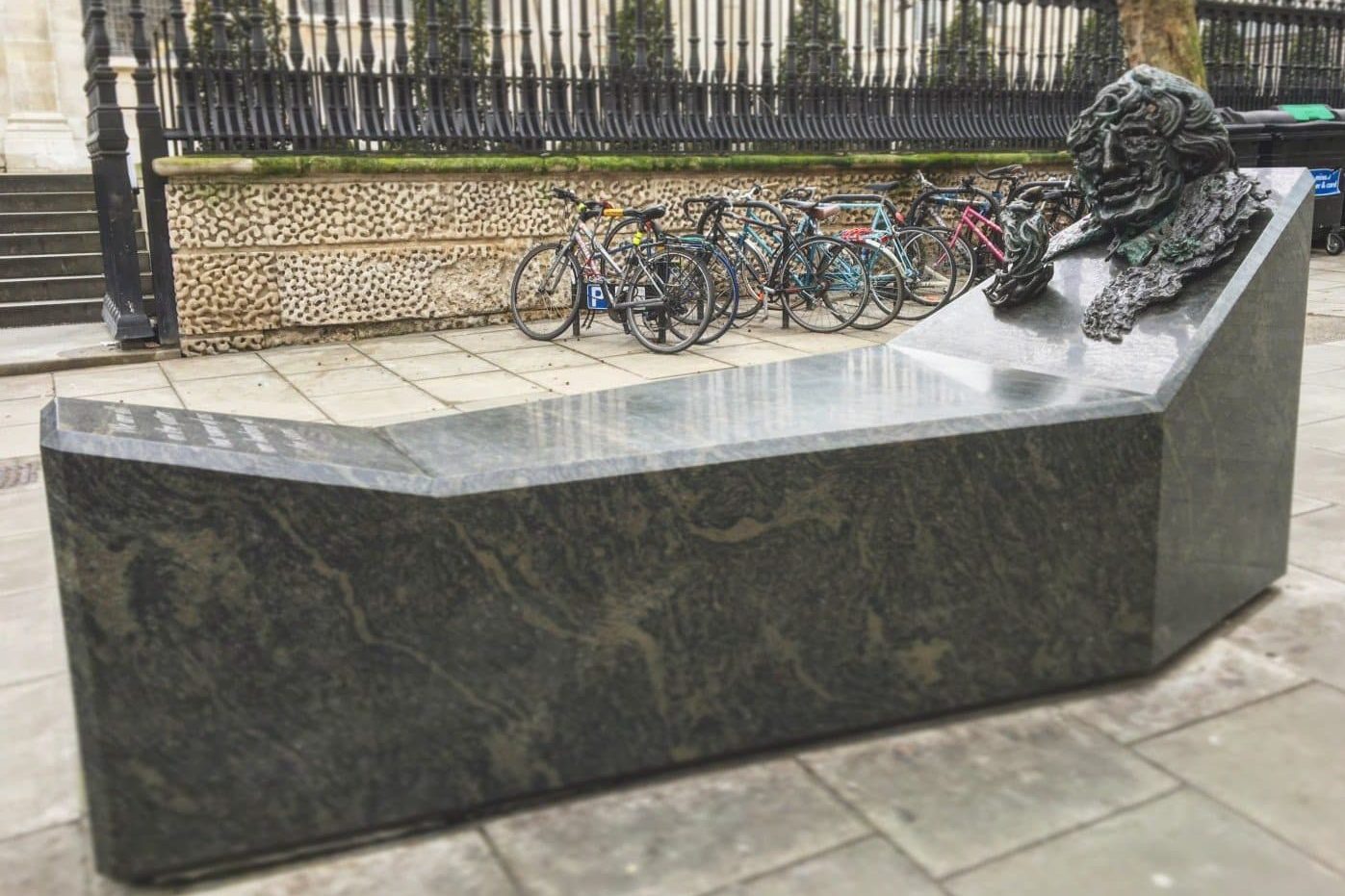 Cigarette in hand, Oscar Wilde emerges in a cloud of smoke like Lewis Carol’s caterpillar, poised to offer up a playful comment or witty comeback.

The granite, coffin-shaped plinth is shaped in a way that encourages passersby to pause and sit with Wilde, maybe have a chat. It also has an engraving of his famous quotes; “We are all in the gutter, but some of us are looking at the stars”

Westminster Abbey is one of the most prestigious burial sites in the country, the final resting place for 30 Kings and Queens.

But it’s not just for royalty. There are over 3,000 people buried within its grounds and one of the most surprising is the plumber;

The grave of the original clown can be found in the eponymous Joseph Grimaldi Park.

Enclosed with railings that give a hint to his theatrical past, but the really strange memorial can be found nearby.

The two gravestones in the grass are dedicated to Grimaldi and Charles Dibdin, composer, writer and actor who employed Grimaldi at nearby Sadler’s Wells Theatre.

The strange twist is that you’re actively encourage to dance on their graves. Designed by Henry Krokatsis in 2010, if you jump on the panels, they blast out a musical note!

If you’re wondering what the artwork sounds like, you can see it in action below!

Sticking to the theatrical theme, the memorial below can be found in St Paul’s, Covent Garden. Commonly known as the Actor’s Church for its proximity to London’s Theatreland.

Charles Macklin was an Irish actor working at Theatre Royal Drury Lane and is credited with popularising the ‘natural style’ of acting – think method rather than am-dram. However on a more macabre note he is also remembered for the murder of a fellow actor; Thomas Hallam who he stabbed through the eye with a cane while fighting over a wig in 1735.

Look again at the memorial, it’s surely no coincidence that the dagger pierces the eye of the drama mask?!

In 1852 there was a ban on burials in central London. With garden cemeteries experiencing even greater demand, Highgate expanded across the road and the East Cemetery was open shortly.

One of the more recent and strange memorials in the cemetery remembers the painter and printmaker Patrick Caulfield. Known for his bold, simple scenes and his grave is no different and provides a striking contrast to the surrounding memorials

Only unveiled in November 2020, our last example shows that strange memorials are just a thing of the past.

One of the Mothers of feminism, Mary Wallstonecraft wrote A Vindication of the Rights of Woman in 1792. In it she argues for equal rights for women, for education for girls alongside boys and (almost a century before the suffragettes) for women to be represented in parliament.

After a 10-year campaign, a statue of Mary Wallstonecraft was unveiled on Newington Green, where she started her writing career. But not everyone was happy.

Designed by Maggi Hambling – who we met at Wilde earlier – she intended the sculpture to be a column of intermingling female forms with the figure of a woman on top. She wanted that figure to look out over the green “challenging and ready to challenge the world”.

But many have questioned the need to have a naked female form, and to ask why the statue couldn’t be a likeness to Wallstonecraft?

I suppose whatever you think personally about this memorial it shows that they can still spark heated debate. As we’ve seen, the strange ways we want to remember others and be remembered ourselves are deeply individual.

Got any others you like (or loathe?) Let me know in the comments!

Each Wednesday morning I send the latest London history blog post, news and inspiration. If that sounds like your cup of tea, sign up using the box below!