11 Strange Things You Can Find Inside London Pubs

in London, Pubs, Things to do in London
14 Comments

London’s pubs are full of history, some are centuries old and there’s plenty of articles squabbling over which is the actual oldest. But it struck me recently that pubs can act as a kind of museum, with many playing host to extraordinary objects.

So I bravely embarked (reader, it was such a challenge) to go in search of strange things inside London pubs.

These are my 11 favourites…

Fleet Street’s Ye Olde Cheshire Cheese is a gem. Rebuilt 1667 after the Great Fire of London the place is cavernous and the perfect spot to lose a few hours.

But the strange ‘thing’ comes in the form of taxidermy. It’s a parrot and its name is Polly, naturally. 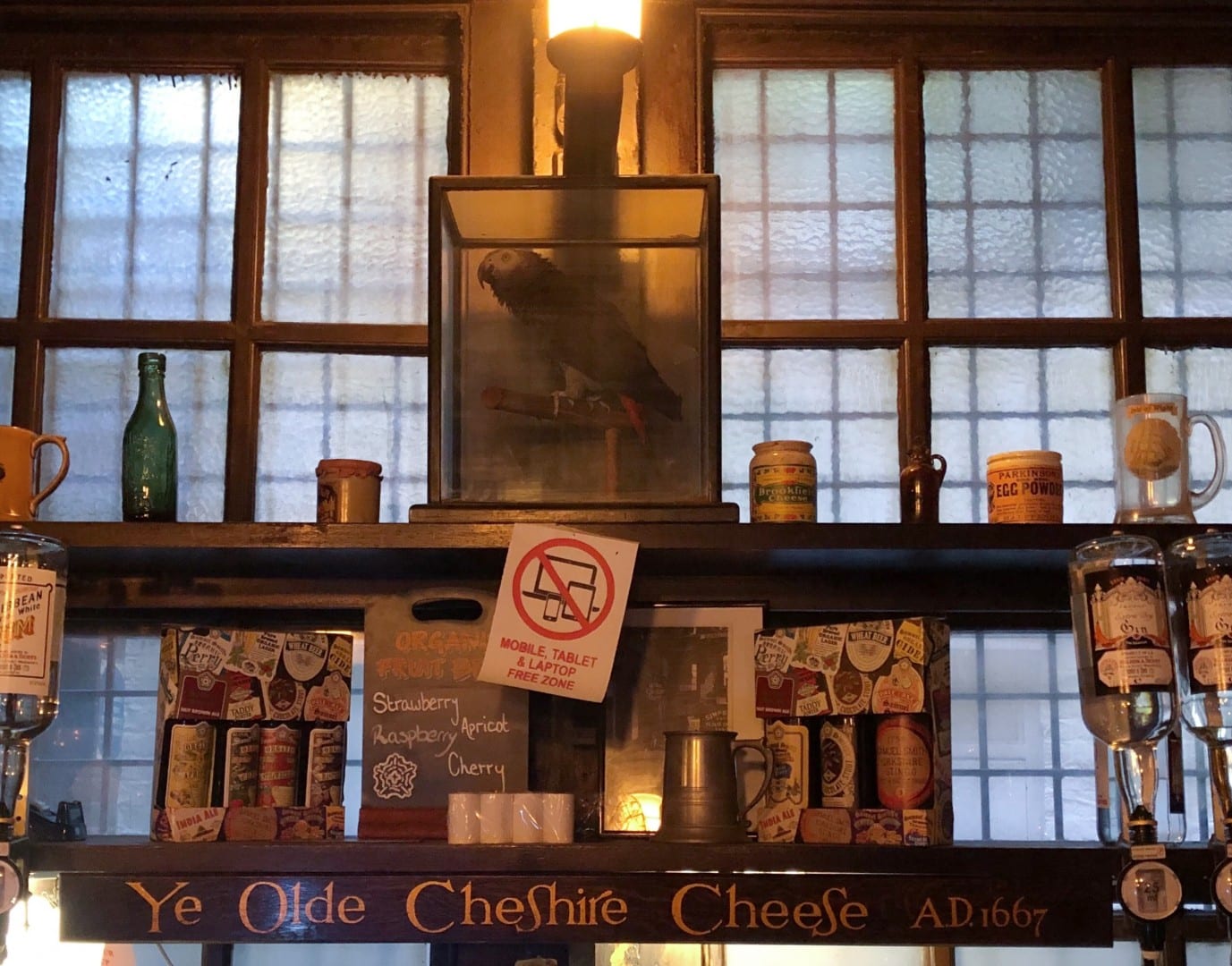 Polly was something of a celebrity, a Grey African parrot that could learn and repeat words (often, rude) as well as imitate the sound of a Champagne bottle being uncorked!

The details are a little tangled, but Polly was definitely a popular resident at the Cheshire Cheese by 1905 because there were panicked reports of her escape. With relief, The Daily Sporting News reported on 7 October 1905 that The Cheshire Cheese parrot is back again, in fine feather and full of beans and bite.”

By the time Polly passed away on 30 October 1926 her fame ensured she featured in international obituaries. She was duly stuffed and placed above the bar. Today you can still raise a glass to her!

Tricky to find, but well worth hunting down, is Holborn’s Ye Olde Mitre. 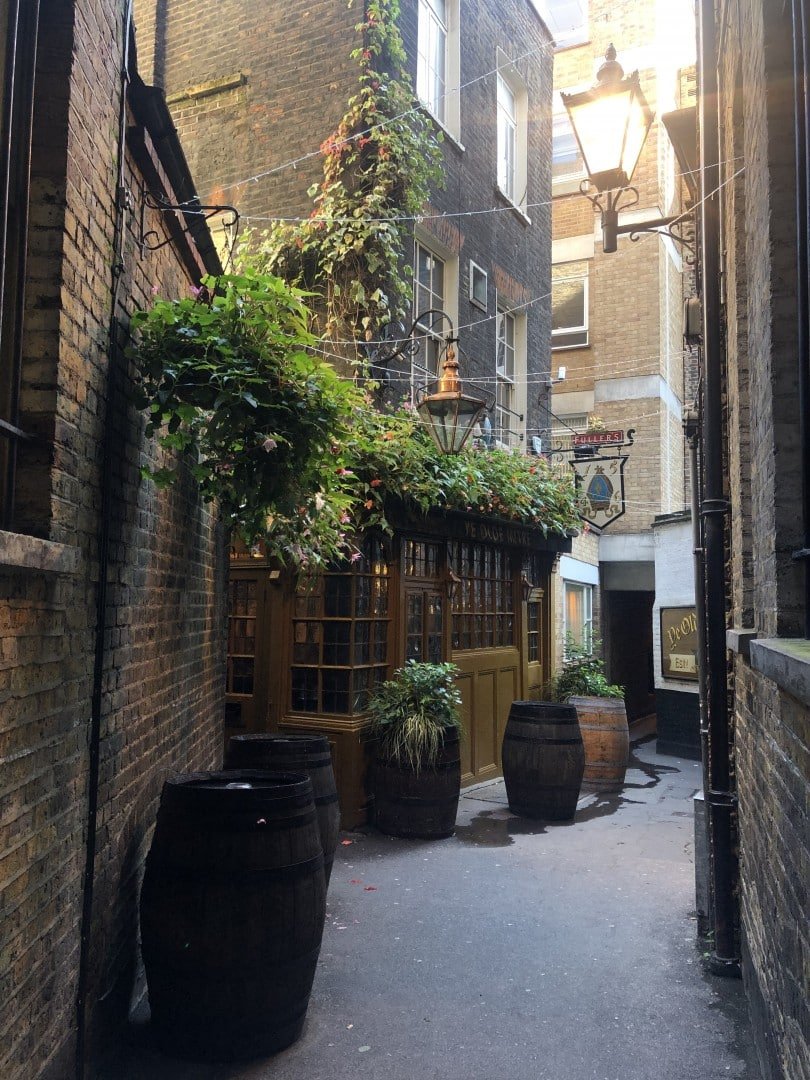 Tucked down a tiny alley off Hatton Garden, the strange thing to find is actually part of the structure of the building. Head for the first door and as you enter, look back. 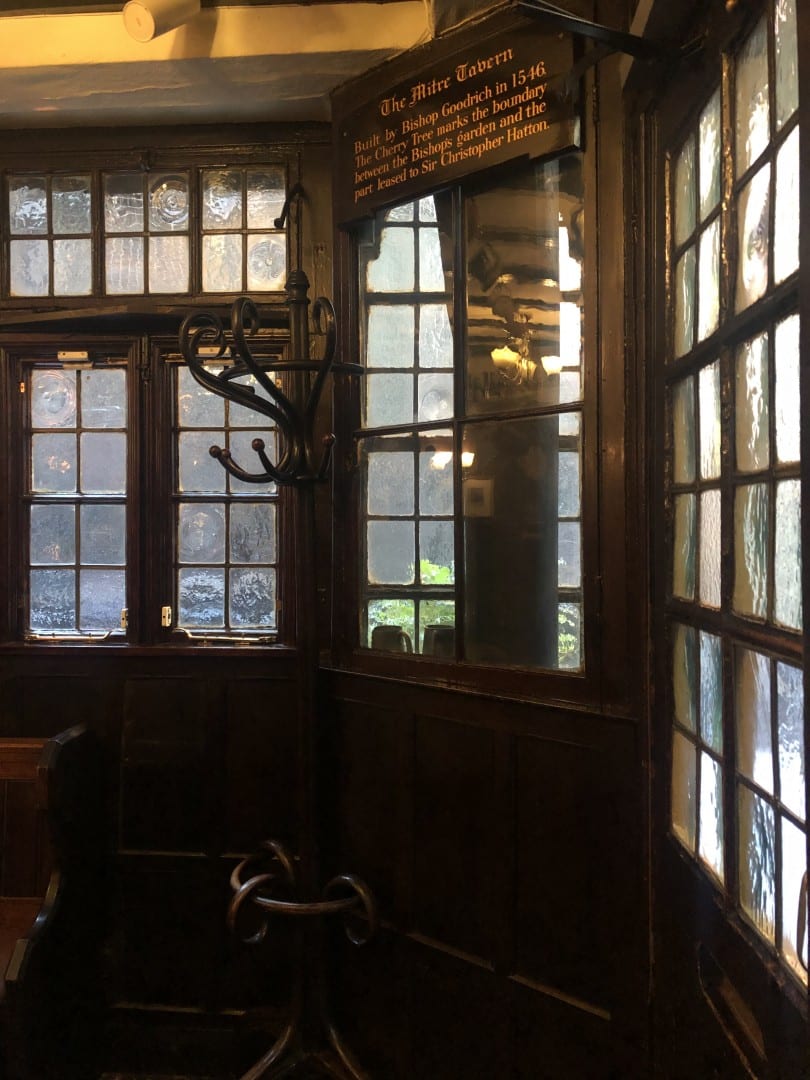 Signs everywhere tell you the pub dates from 1536, but actually the building is from 1773. There was a Tudor-style refurb in the 1930s but one feature is worth closer attention. What seems to be a structural support is actually an old fossilised cherry tree. 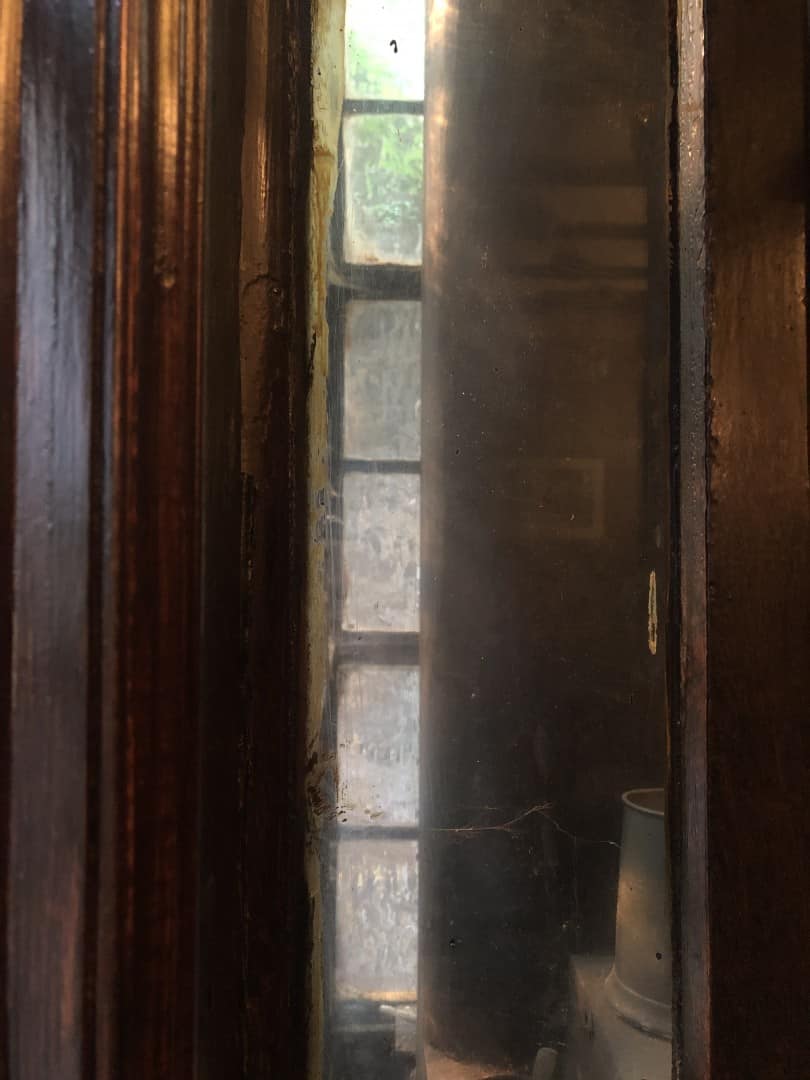 Supposedly it stood in the garden of Sir Christopher Hatton, a court favourite of Queen Elizabeth I and who gave his name to the neighbouring Hatton Garden. Elizabeth, it’s said, loved nothing more than a good dance around this tree.

There was once a time when no proper pub was complete without a piano around which the tipsy clientele could sing crowd favourites.

In Bloomsbury, The Lamb has something even more impressive; A Polyphon. Basically a Victorian jukebox. 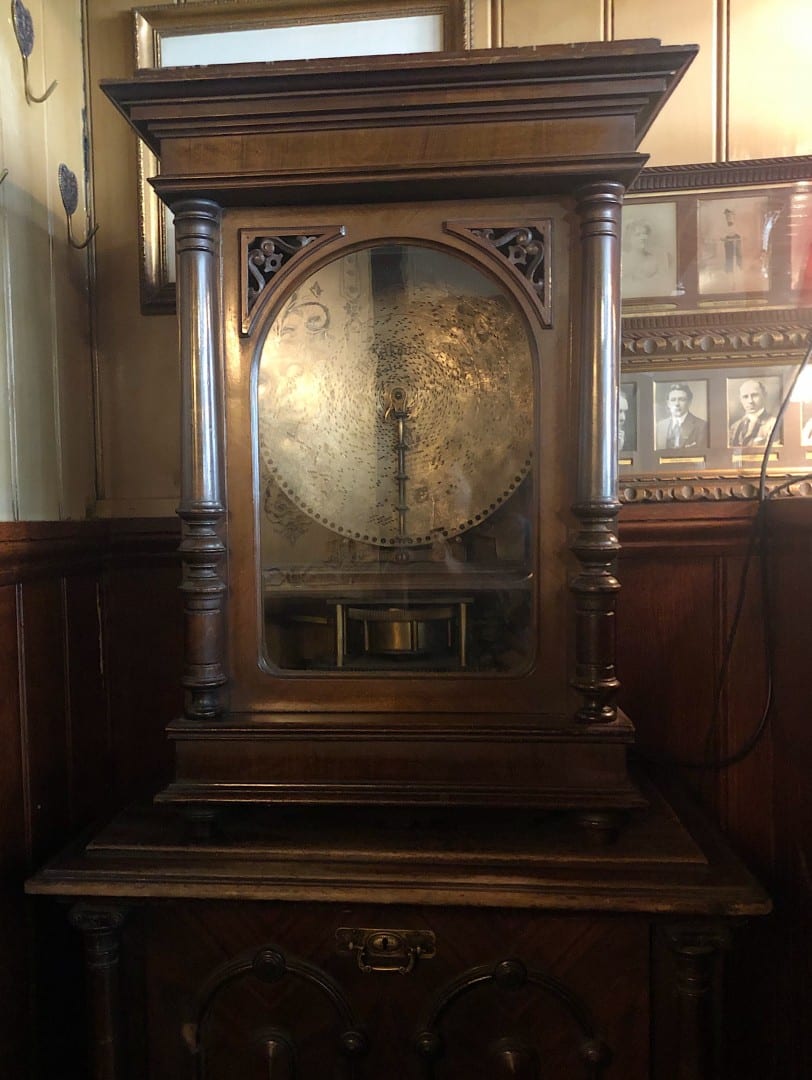 The metal discs work a little bit like vinyl, the sound being produced from the bumps in the records. It stands a little bit unloved but is actually rather valuable, polyphons listed online that are 1/4 of this size are easily a couple of thousand pounds!

The George Inn, off Borough High Street is London’s last surviving galleried coaching inn, rebuilt in 1676. Inside the rooms are no less atmospheric and on the ground floor you can find this impressive timepiece. 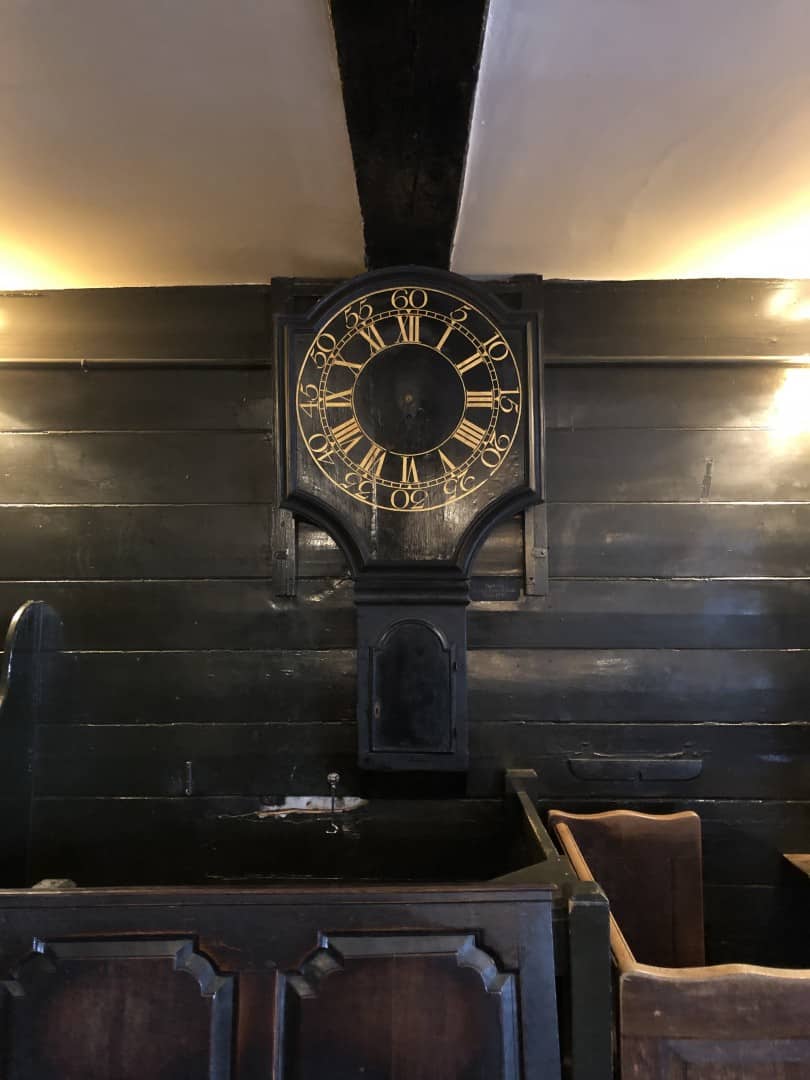 In 1797 a tax of 5 shillings was placed on all clocks by PM William Pitt. It almost bankrupted most major watchmakers, caused a huge decline in watch demand and in the wake of the uproar the tax was repealed after 9 months.

A nearby sign declares this clock as an extremely rare ‘Parliament Clock’, one of the few surviving clocks that were hung up in response to the government’s ‘tax on time’. However, that’s not quite accurate.

Large clocks, often referred to as ‘Tavern Clocks’ were popular from the 1720s and throughout the 18th century. The term ‘Parliament Clock’ was simply a handy name for this style of large clocks inside pubs. Sadly, the idea that they were a sneaky way to avoid paying taxes was a myth that sprung up after the tax was repealed.

Continuing the timely theme, another unusual clock can be found inside the Dolphin Tavern on Red Lion Street, Holborn.

Not at all useful for telling the time, the clock forever reads 10.40pm because of an event on 8 September 1915, when a high explosive German bomb fell on the Dolphin. 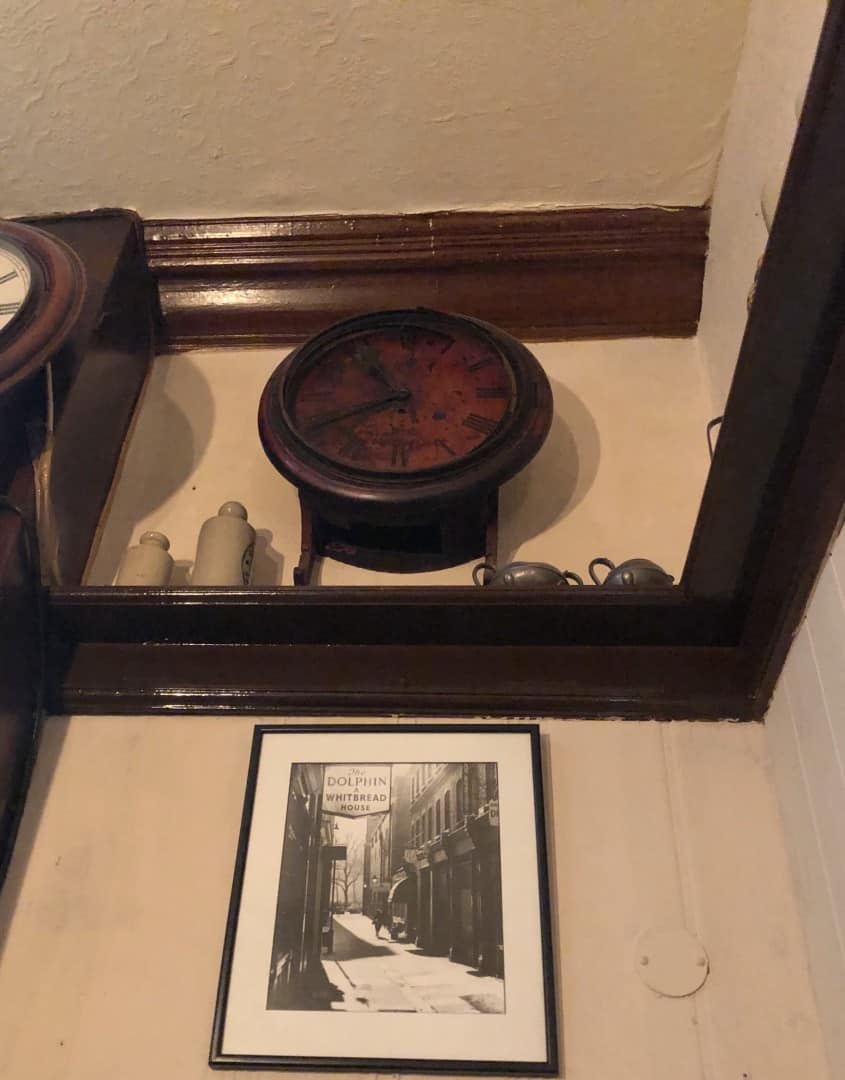 The blast killed three people and completely destroyed the pub. However, amidst the rubble the clock was found, stopped at the exact time the bomb had hit.* It’s now on display in the rebuilt pub.

* According to Ian Castle, expert on Zeppelin raids, the bomb actually fell at 10.49pm. The clock has slowed down over time to now show 10.40pm almost 100 hundred years on.

Go downstairs at the Southwark Tavern and you’ll find some atmospheric seating. 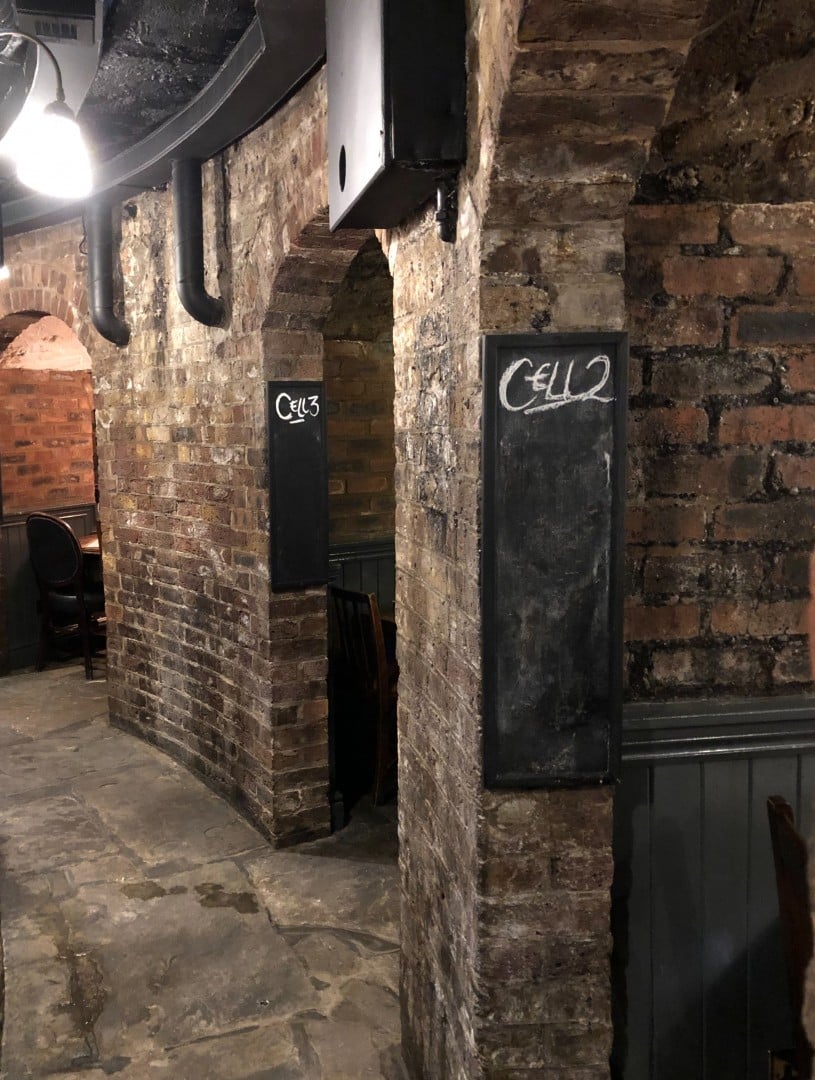 The pub claims they are cells from a former debtor’s prison (yep, previously in London you were locked away if you failed to pay your bills) but it’s hard to know exactly which prison they belonged to.

A possibility is that they absorbed the former cells of the Sessions House gaol (knocked down 1793) which is now the site of the Slug and Lettuce across the road.

In any case, they make a cosy little spot for a drink on a cold day! 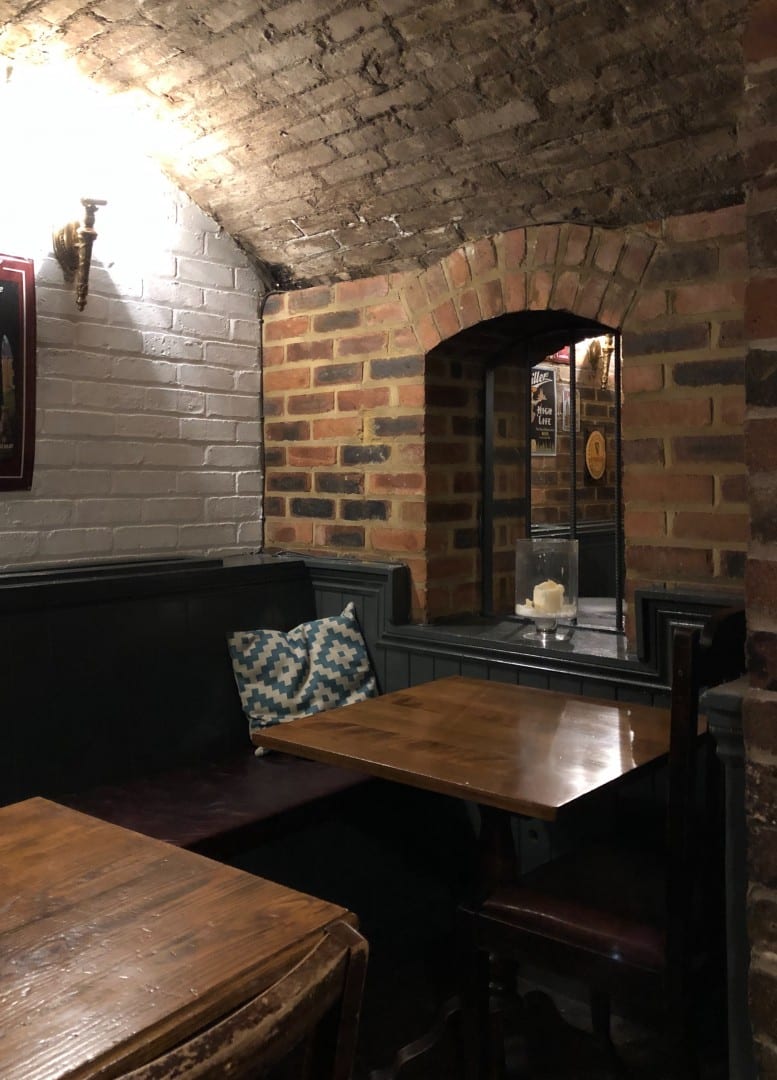 As we saw before, ‘cells’ in lower floors of pubs are a common occurrence across London. However the majority are simply eerie-looking wine cellars that are now claimed to be former cells. 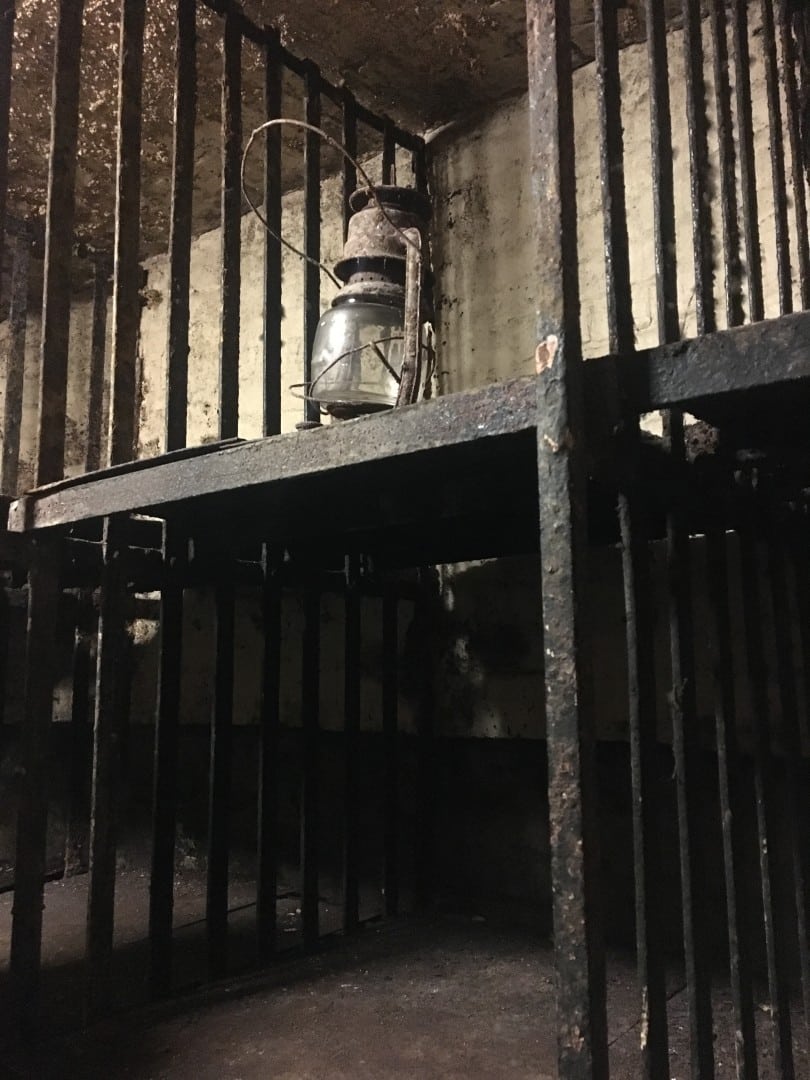 The most famous of these is Viaduct Tavern, which claims to hold cells of London’s most notorious prison; Newgate in its basement. This is simply not true I’m afraid.

The pub is opposite the former prison, sure. But the line of the wall of the prison is nowhere near the pub and the dates don’t even work; Newgate Prison was demolished in 1902 and the Viaduct Tavern was there by in 1869. The brilliant Peter Berthoud lays out all the flawed arguments if you need any more persuasive myth-busting!

Oh, and the ‘feeding hole’ for prisoners (shown in the picture below) is far more likely to be a coal hole. Sorry to burst your bubble! 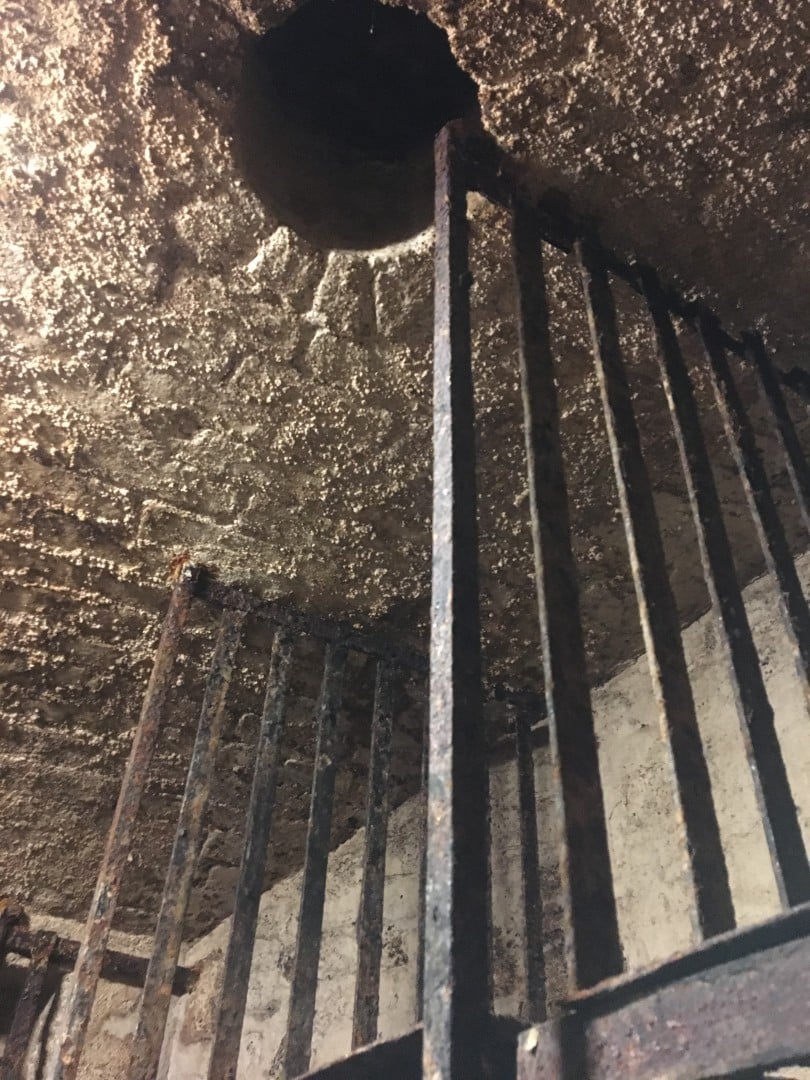 From the outside The Blackfriar – funnily enough in Blackfriars – gives you a hint of its gorgeous interiors. 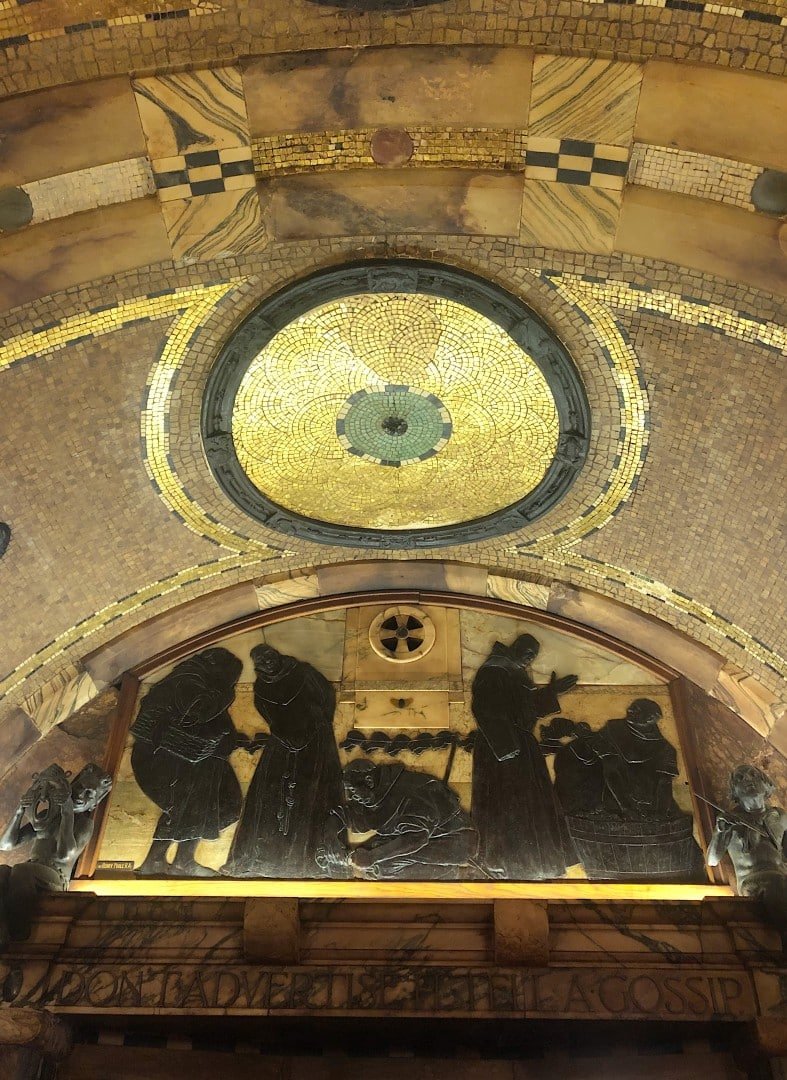 The pub was built in 1875 on the site of the former Dominican Friary whose brother wore black cloaks. The interiors are so outrageously OTT they need to be seen in real life. Even photos don’t quite so them justice… 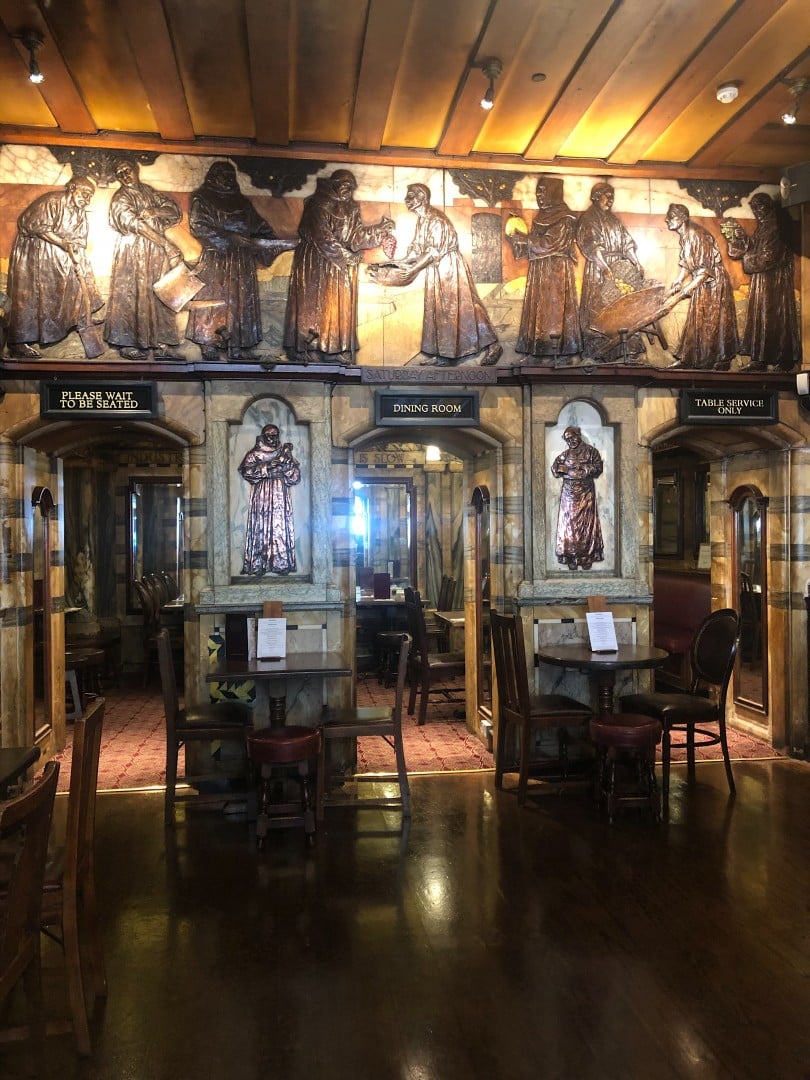 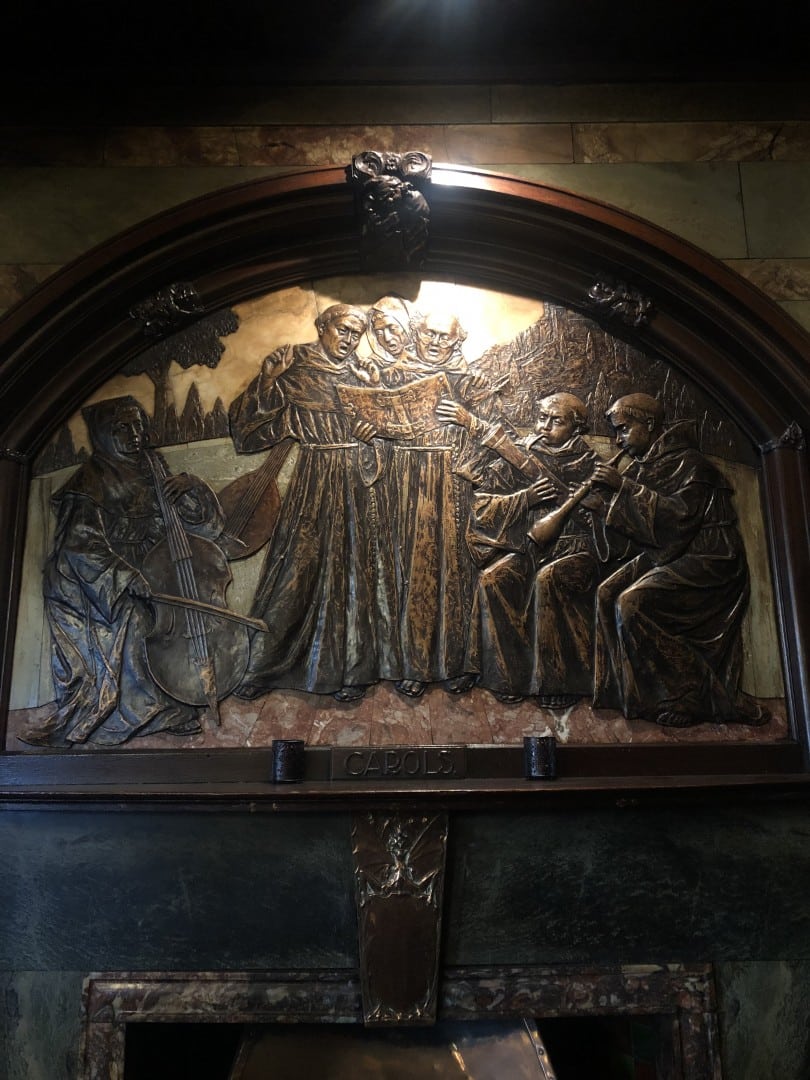 On the subject of lovely interiors, if Victorian dark wood and cut glass is your thing, you really need to visit Holborn’s Princess Louise.

Built in 1872, the interiors were completed in 1891 and there isn’t a surface that’s not tiled or plastered to perfection. 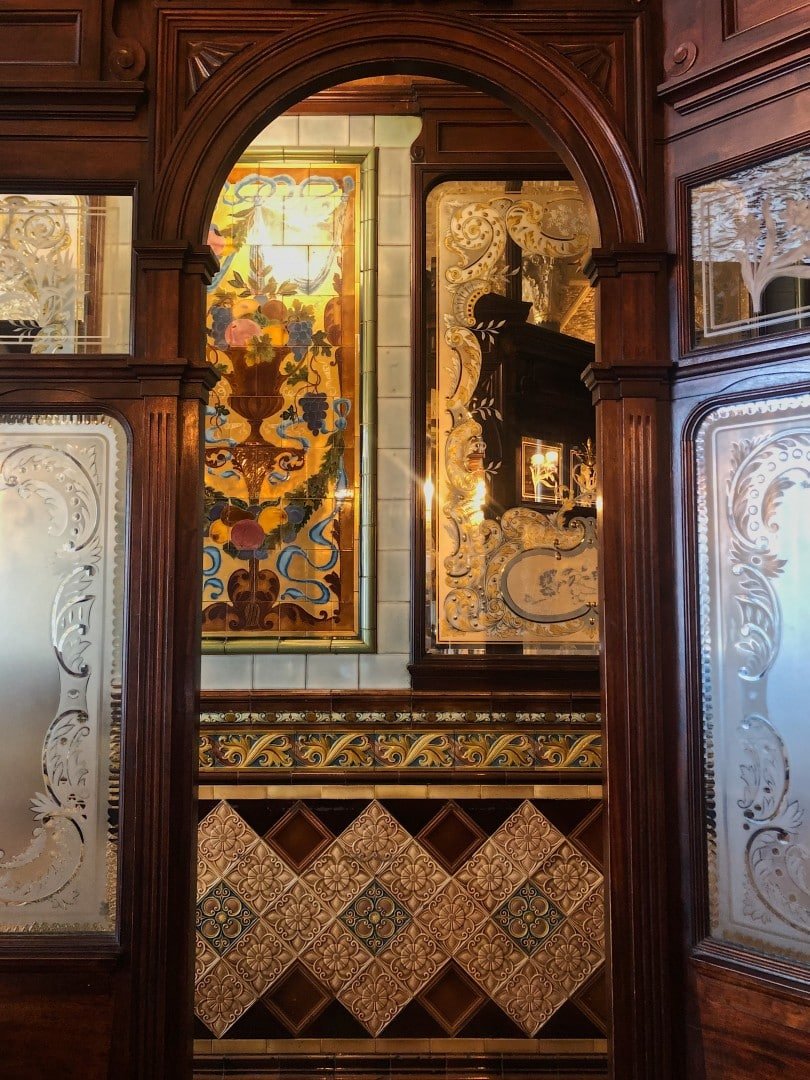 Even the men’s toilets don’t let the side down. I don’t make a habit of visiting pub urinals, however I made a special request to see these ones. 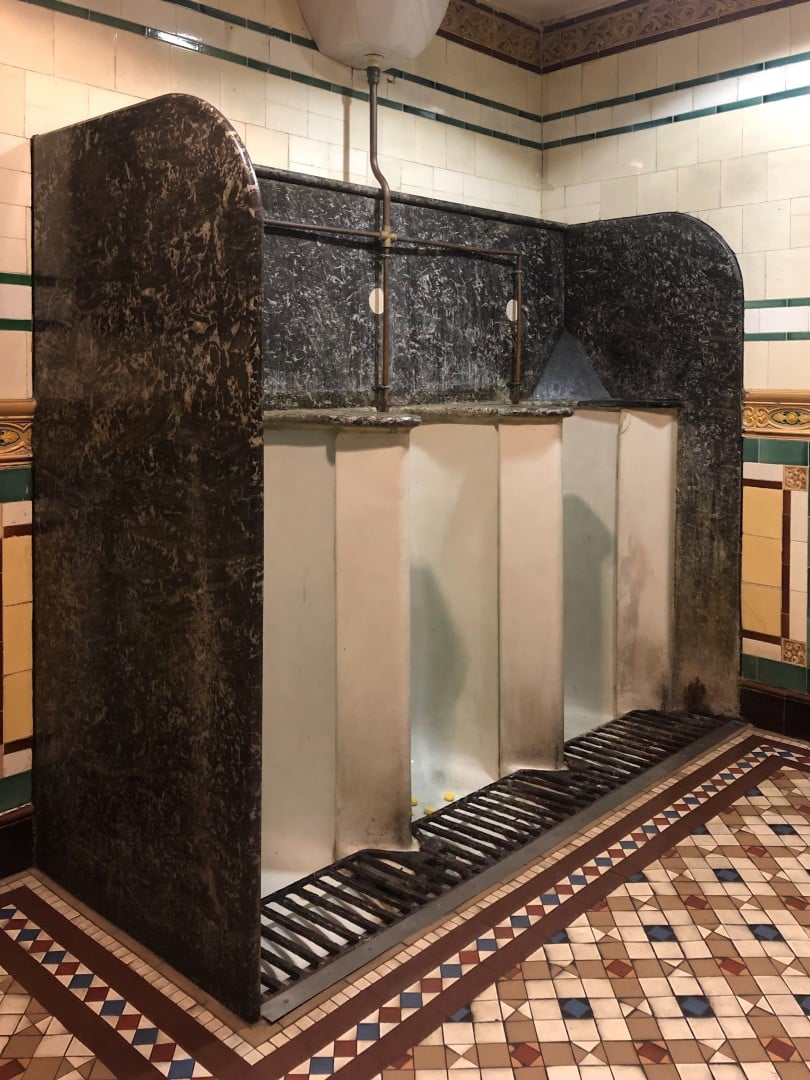 Sadly the Ladies toilets are pretty disappointing in comparison!

The City’s Olde Wine Shades was a subject of a curious recent blog post, but for the moment we’re concerned with its interior.

Head downstairs and you’ll find a walled off entrance to what claims to be a secret tunnel. It even has helpful writing above it to help you identify it! 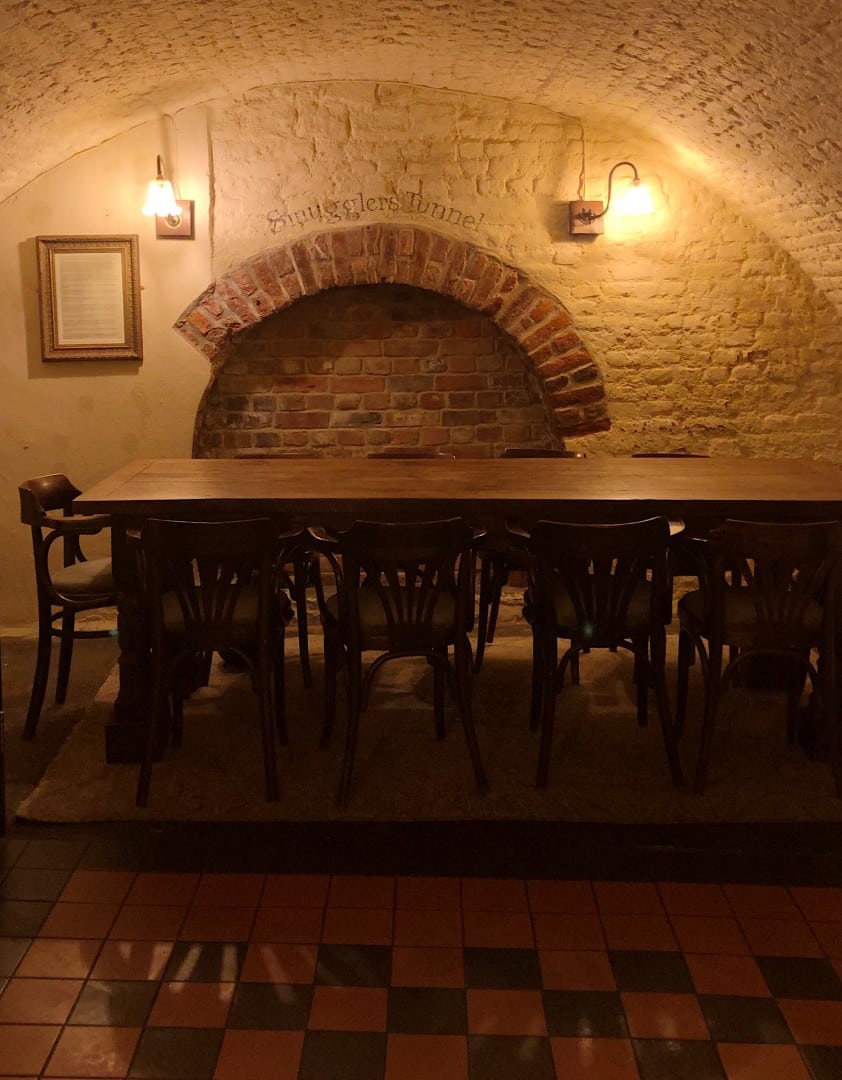 The building was first constructed in 1663 as a merchant’s house so the idea of having a sneaky tunnel close to the River – presumably to avoid paying import duties – does seem plausible. Any surviving tunnel was sadly destroyed during Blitz bombing so now we only have the pub’s word for it!

Right by Devon’s Road DLR in Poplar is The Widow’s Son, also known as The Bun House.

Each year they host a truly bizarre event at Easter as a reminder of a poor widow who also lost her son in the 19th century. The story goes that this old woman determinedly waited for her son’s return from war, baking him a hot cross bun each Easter. Sadly he never returned, but a new hot cross bun is placed in a net on the pub’s ceiling each year! Read more about the ceremony here. 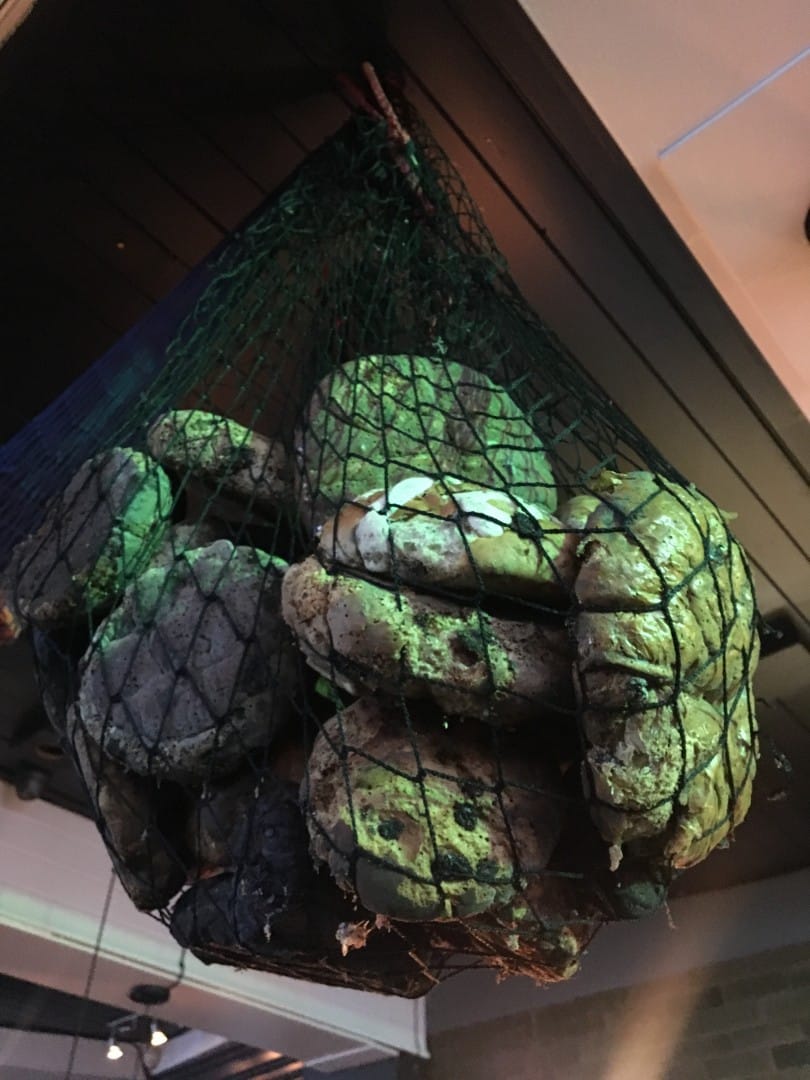 I’m sure there are plenty more examples across the many drinking dens of London. Any more historic curiosities to add? Let me know in the comments!