in architecture, Churches and Graveyards, London, Look Up London
10 Comments

For centuries the skyline of London was navigable by the steeples of its churches. Rising heavenwards, these architectural delights are as eclectic as ever. You just need to look (up) a little closer! 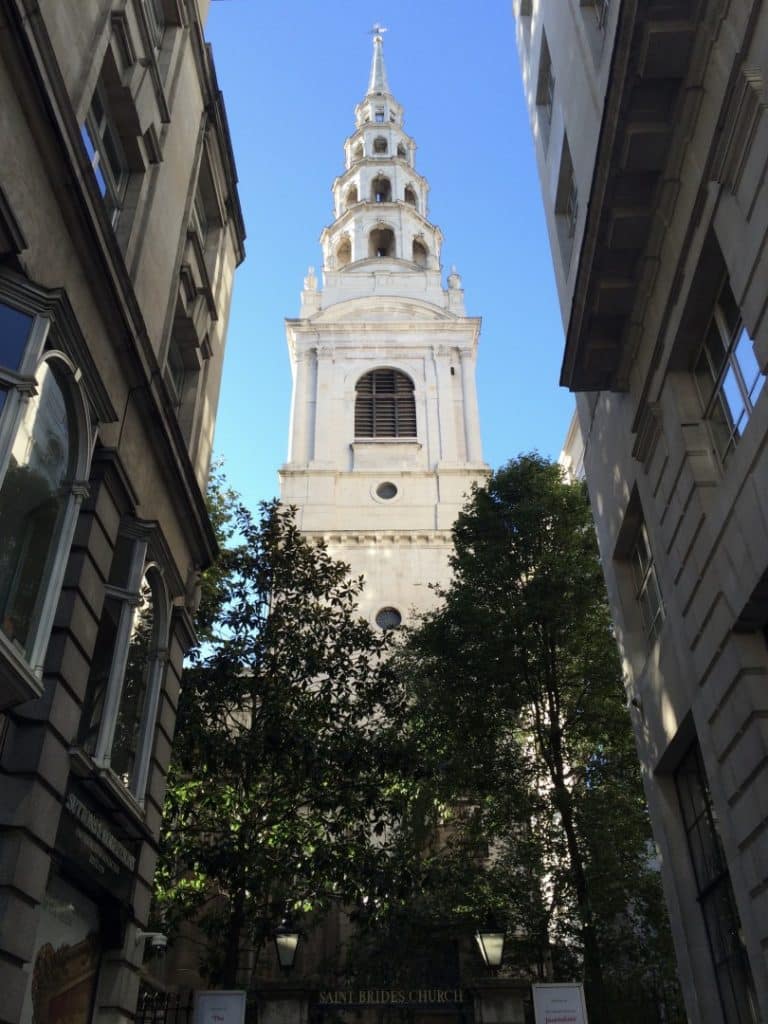 Still known as the Journalist’s Church because of it’s place on Fleet Street, the former hub of printing industry and known as the ‘Street of Ink’. The Wren church of St Bride’s was rebuilt after the 1666 Great Fire of London and dates from 1675.

The steeple was added later in 1703m at the time the tallest in London after St Paul’s Cathedral and has a bit of a romantic story attached to it, all down to its ‘wedding cake’ shaped spire.

The pastry chef Thomas Rich – while contemplating his upcoming marriage – designed a multi-tiered cake on the St Brides steeple. Until his death in 1811 he made a small fortune peddling cakes under its design!

A stone’s throw from St Bride’s along Fleet Street is St Dunstan-in-the-West, rebuilt in 1831 after miraculously surviving the Great Fire of London. Luck had run out by the 1940s however and the steeple didn’t survive The Blitz, it was rebuilt in 1950 thanks to newspaper magnate Viscount Camrose. 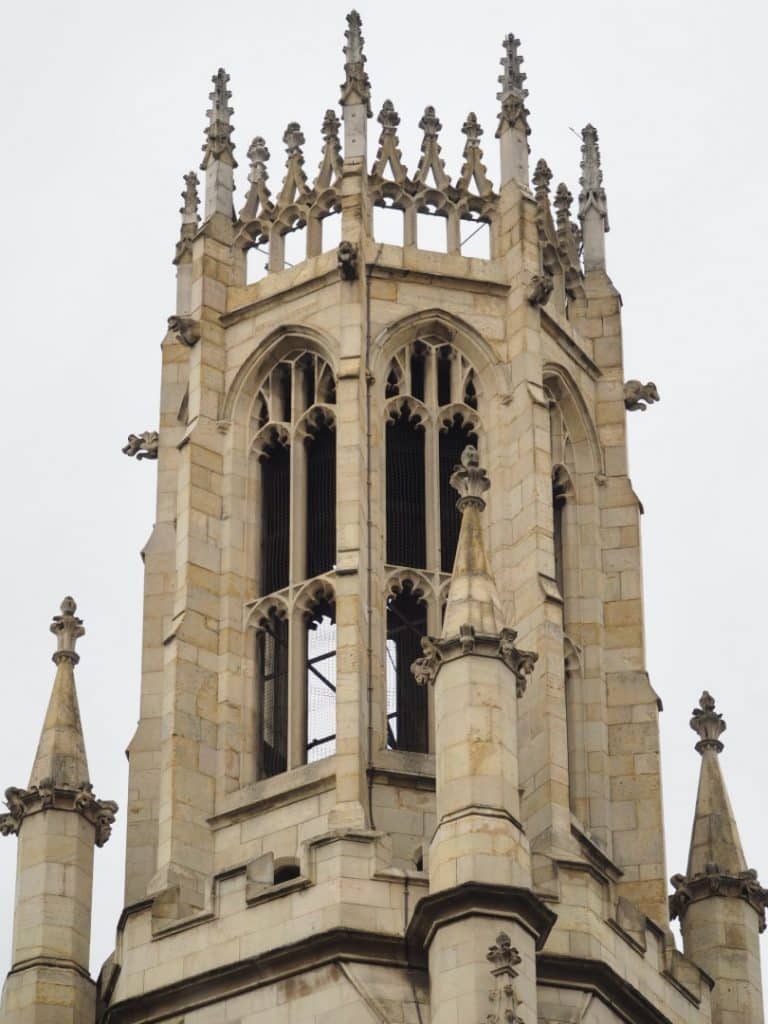 I wanted to include this church not for any particularly strange historic story but purely on its architectural merit. The architect was John Shaw Jr who is described as designed in the ‘manner’ of Christopher Wren (what a compliment!) And I think his elegant tower on Fleet Street is often overlooked.

No longer a church, St Luke’s is now a music centre and home to the London Symphony Orchestra’s community and education programme.

It’s sort of fitting therefore to have the most bizarre architectural addition; a huge obelisk instead of a steeple. 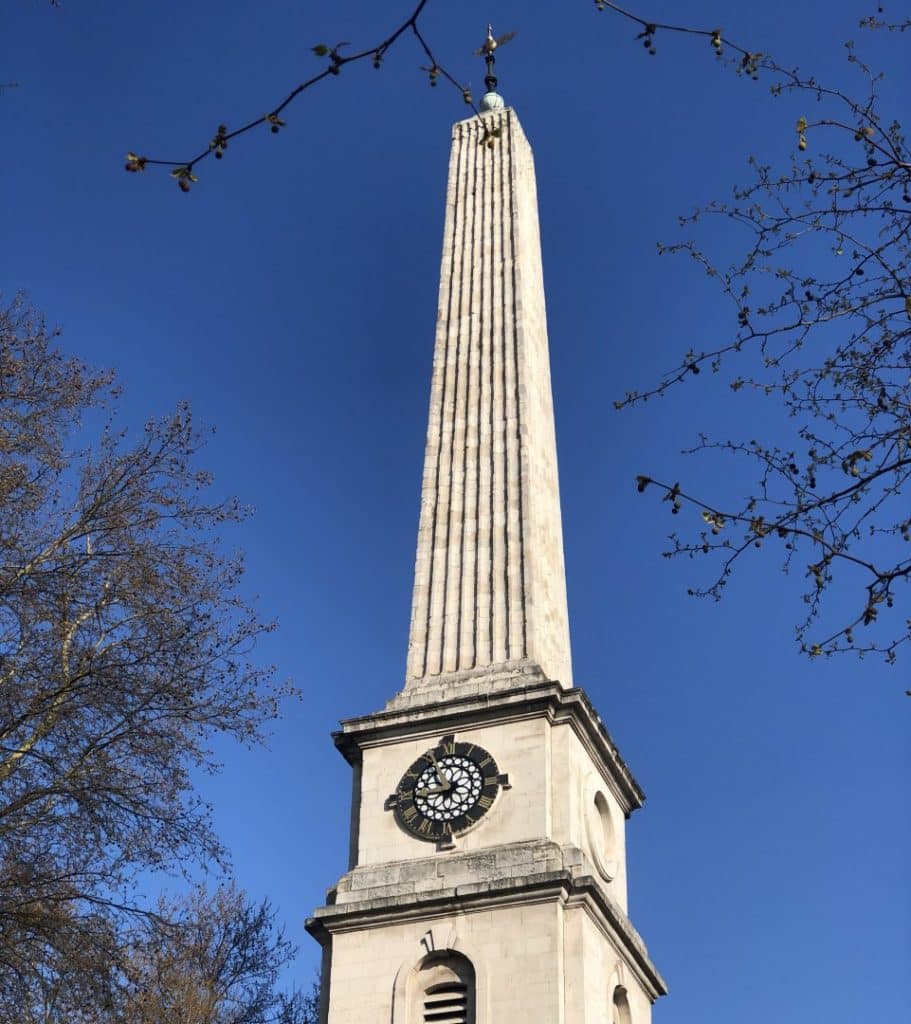 The church was designed by John James but several parts (including the odd steeple) were designed by Nicholas Hawksmoor between 1727-1773. Hawksmoor had a bit of an obsession with ancient shapes; there’s a peculiar pyramid to be found in the churchyard of St Anne’s, Limehouse. Find out more from the church’s website here.

This elegant spire (completed in 1876) cuts a lovely shape outside Lambeth North Station. 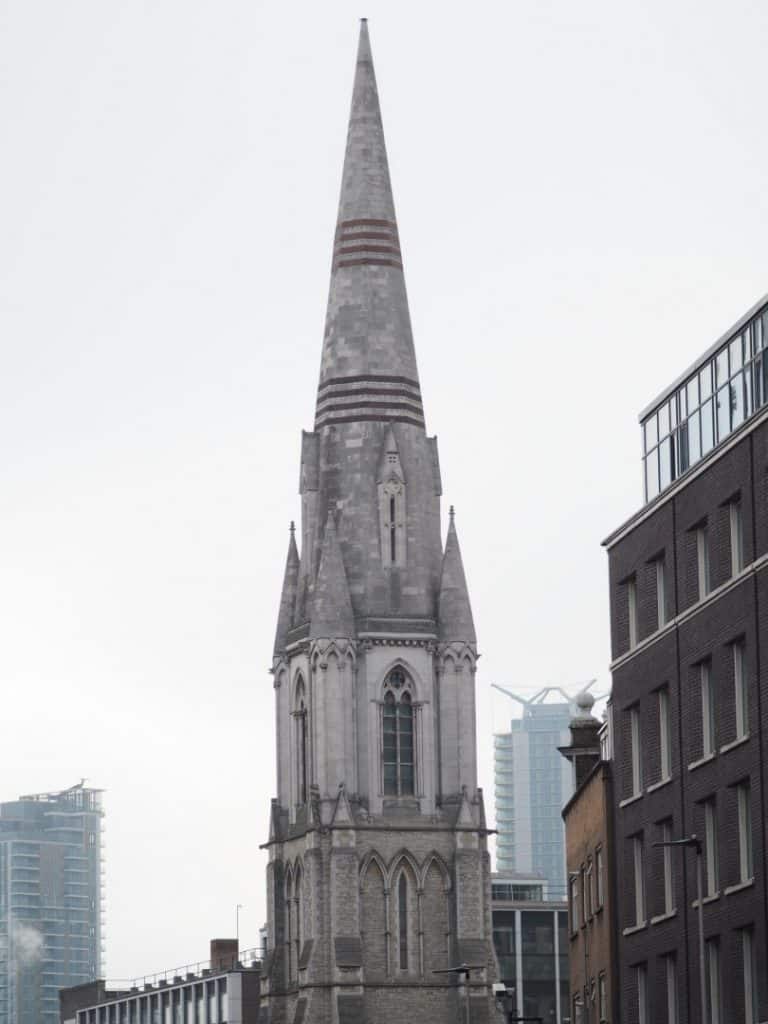 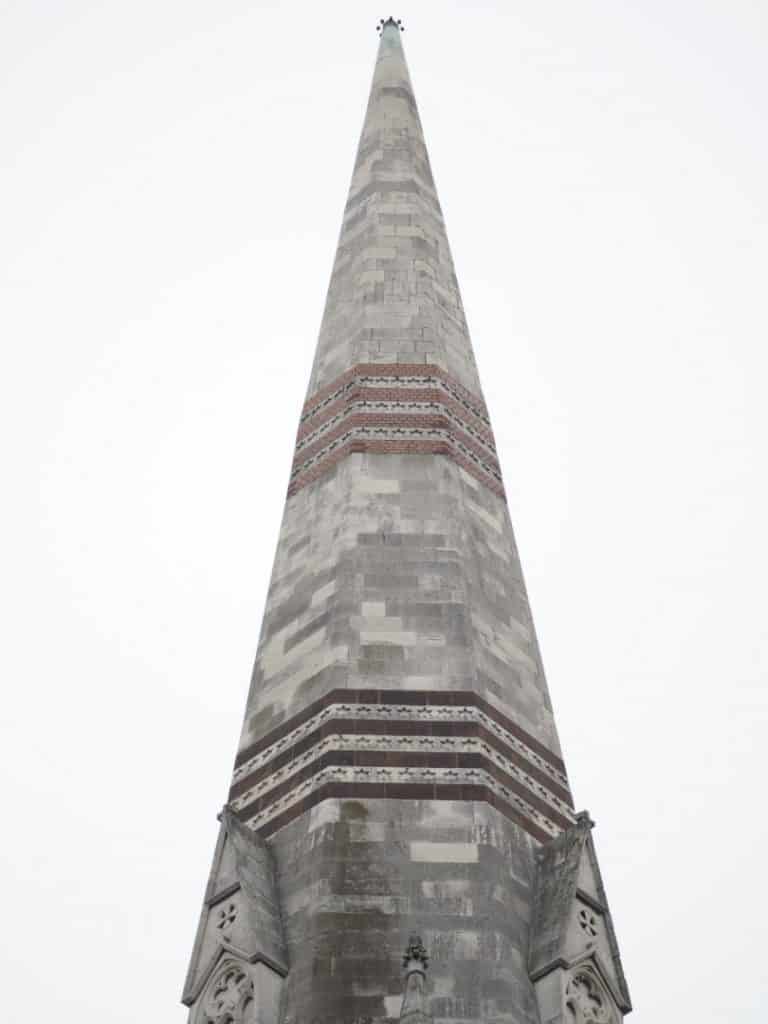 The American connections are deliberate and its official name is the Lincoln Memorial Tower, a reference to the US President Abraham Lincoln. The link comes from Christopher Newman Hall, who was a firm and vocal supporter of Lincoln and the abolition of slavery during the American Civil War. Hall was the pastor of Surrey Chapel, a nearby methodist chapel that moved to this site.

The Lincoln Memorial Tower is now the only part of the church that survives, the rest was destroyed during an air raid in The Second World War and the tower is now deconsecrated and used as office space.

I’ve written a full post on this steeple here but this is probably the most visually striking one on the list. 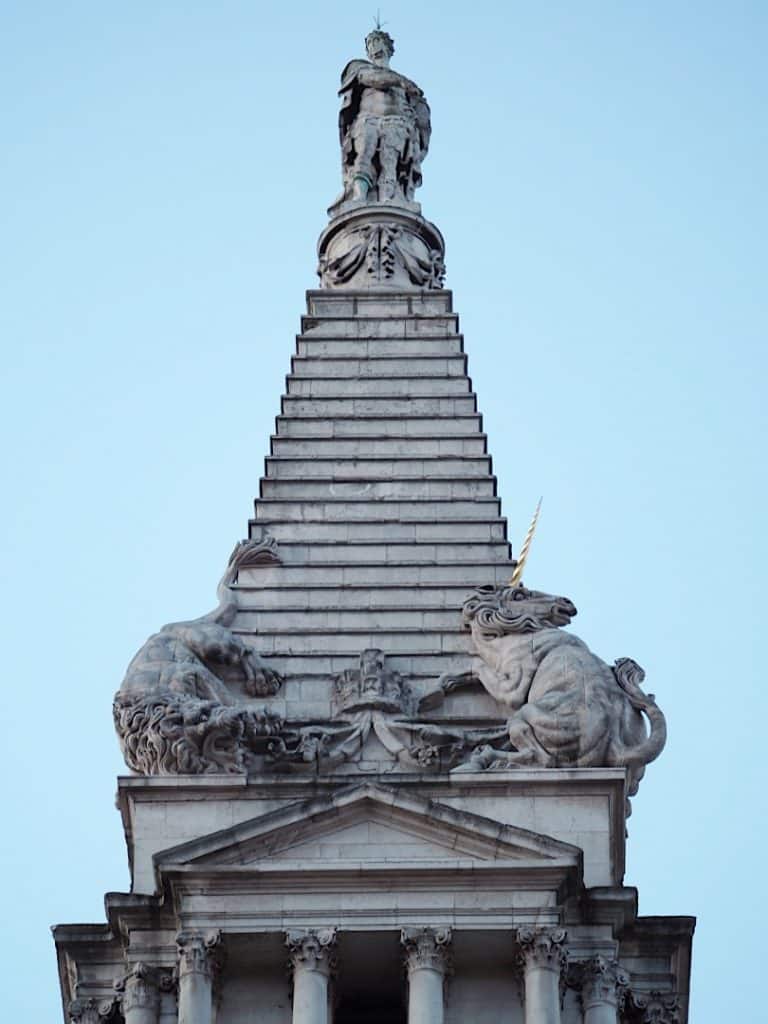 Originally built 1730 by Nicholas Hawksmoor, the current sculptures were replaced by Tim Crawley in 2006. King George I looks across London from the top of a pyramid (I did say Hawksmoor loved a pyramid!) while below a lion and unicorn – symbolising England and Scotland – chase around the base.

Another architectural oddity on the list is the former St Mark’s in Mayfair.

Designed by John Peter Gandy in the Greek Revival Style, it was completed in 1828 and despite the boxy little tower contrasting with the elegant ionic columns, I thought the design was saved by the tracery on the top, allowing light to shine through little circular holes. 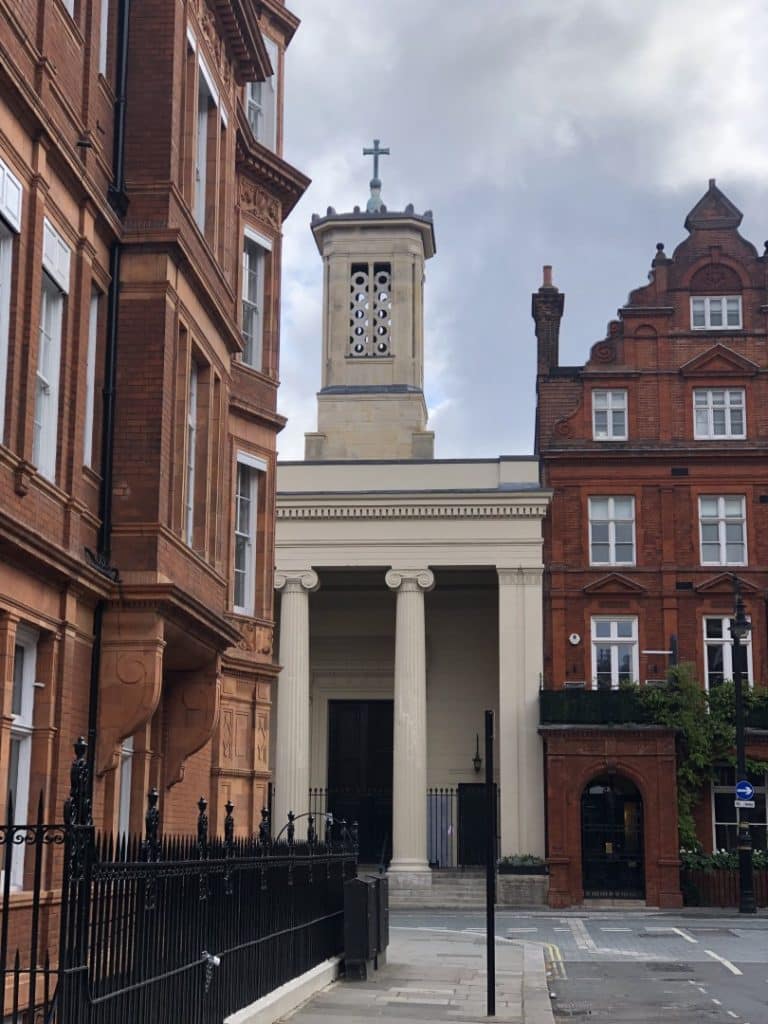 It’s owned by the Grosvenor Estate who have undergone a £5million restoration project to transform the building into Mercato Mayfair, a food hall run by the team behind Mercato Metropolitano in Borough. 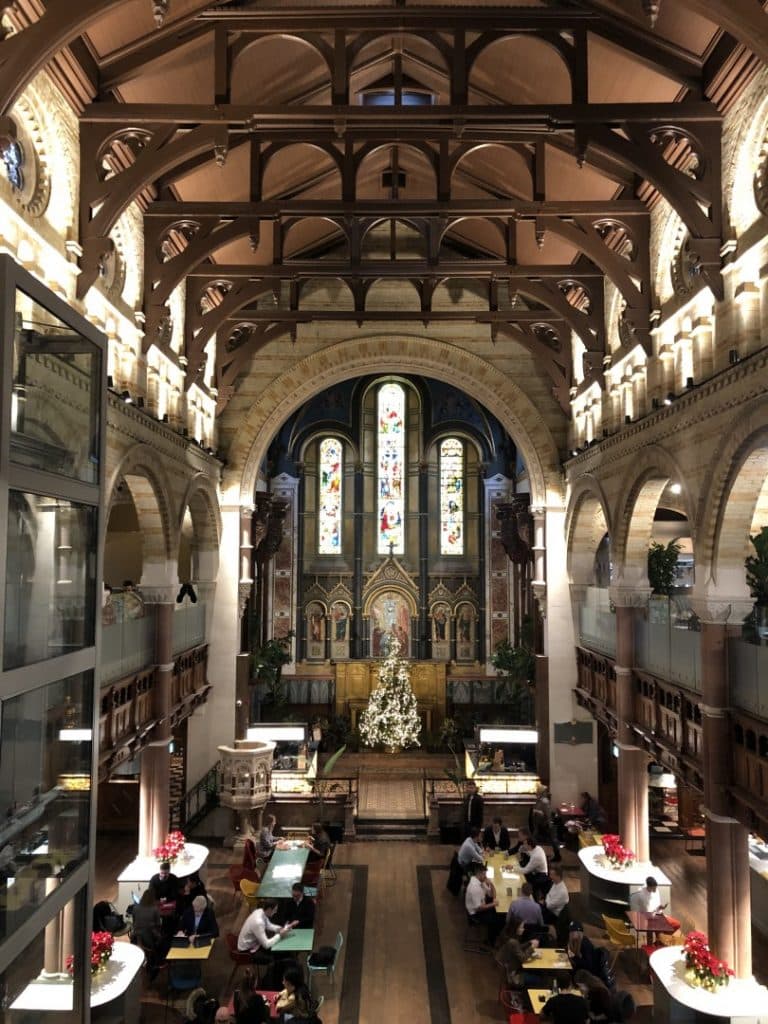 From afar the short and simple steeple of this Poplar church doesn’t seem too unusual. 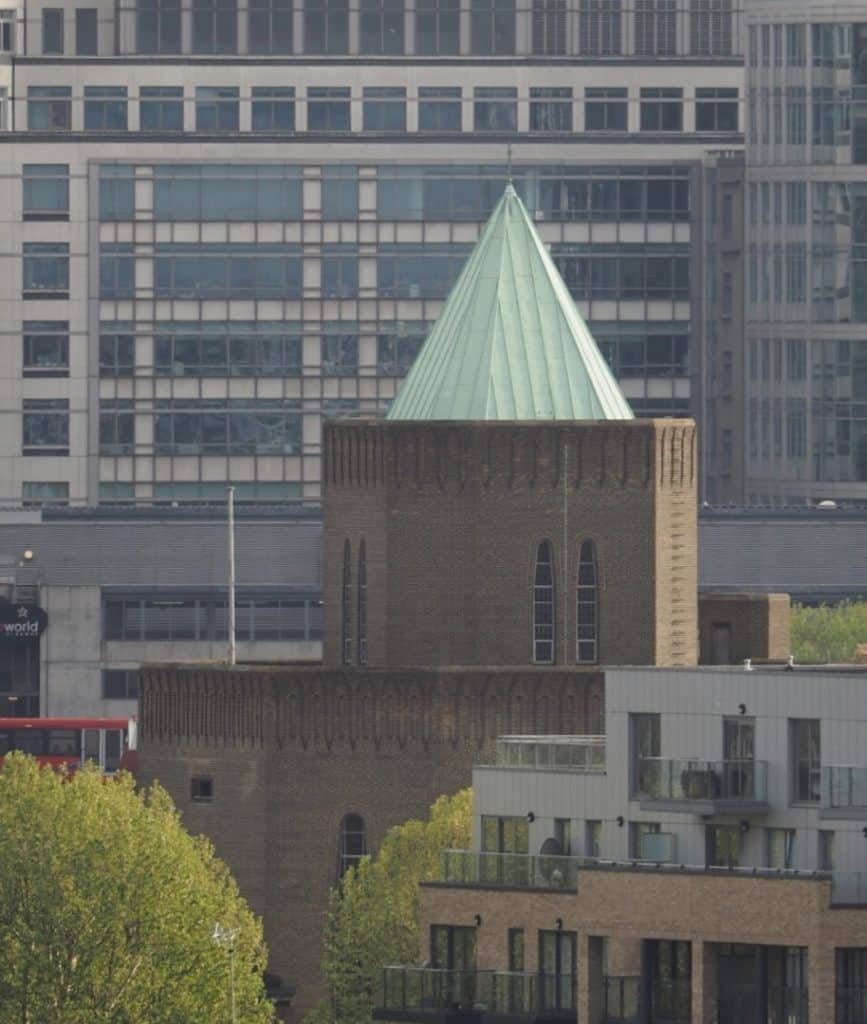 But once you’re close, look up and you see the bizarre incongruity of the scale of steeple versus church. Like an undersized party hat on the world’s strongest man. 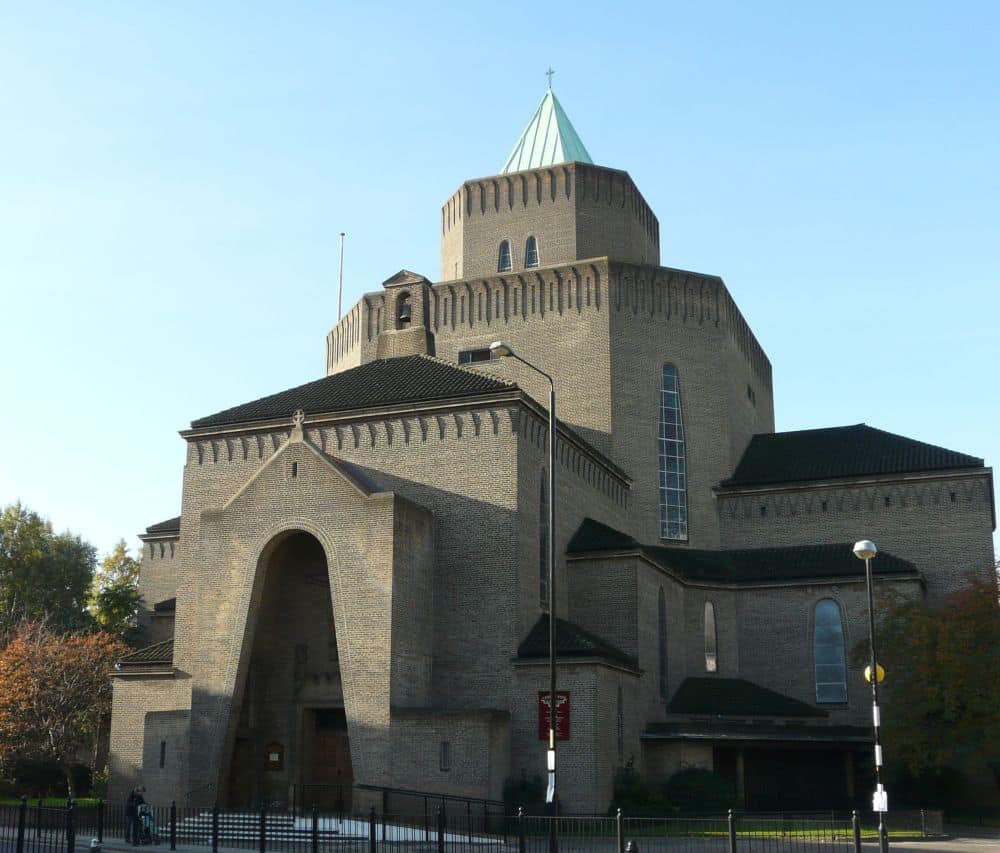 Image by Andrew who runs Londonchurchbuildings.com, a fantastic resources for images of Greater London Churches.

SS Mary and Joseph’s foundation stone was laid in 1951 after the former Catholic church was destroyed by bomb damage during the Second World War. It was part of the architectural project of the Festival of Britain, celebrated in the same year, designed by Adrian Gilbert Scott (brother of Giles Gilbert Scott who designed the iconic red telephone box).

Including the steeple the church stands at 140ft and prior to the arrival of Canary Wharf’s skyscrapers could be easily seen from Greenwich Park.

Just like the Lincoln Memorial Tower, having an attached church doesn’t make you any less of an interesting steeple. Although this is a pretty extreme example. 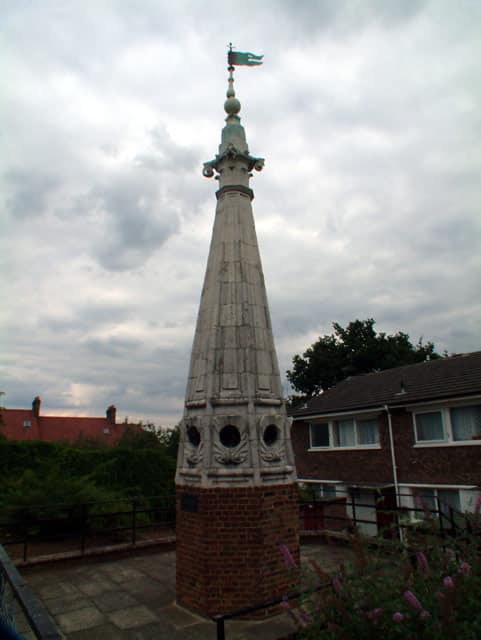 This is a Christopher Wren steeple, designed for St Antholin’s on Budge Row in the City of London in 1682.

The spire, although appreciated for its architectural design and history, was removed from its church body in 1829. This was either because it was too heavy or because it was damaged by lightening. Thankfully the top section was purchased by Robert Harrild, who moved it to his manor house in Sydenham. Though his house hasn’t survived, the steeple does and is surrounded by a 1960s housing estate.

Construction for St Pancras New Church started in 1819, under the designs of William Inwood and his son while Isaac Seabrook was the builder. The foundation stone was carved with the following phrase; “May the light of the blessed Gospel thus ever illuminate the dark temples of the Heathen.” 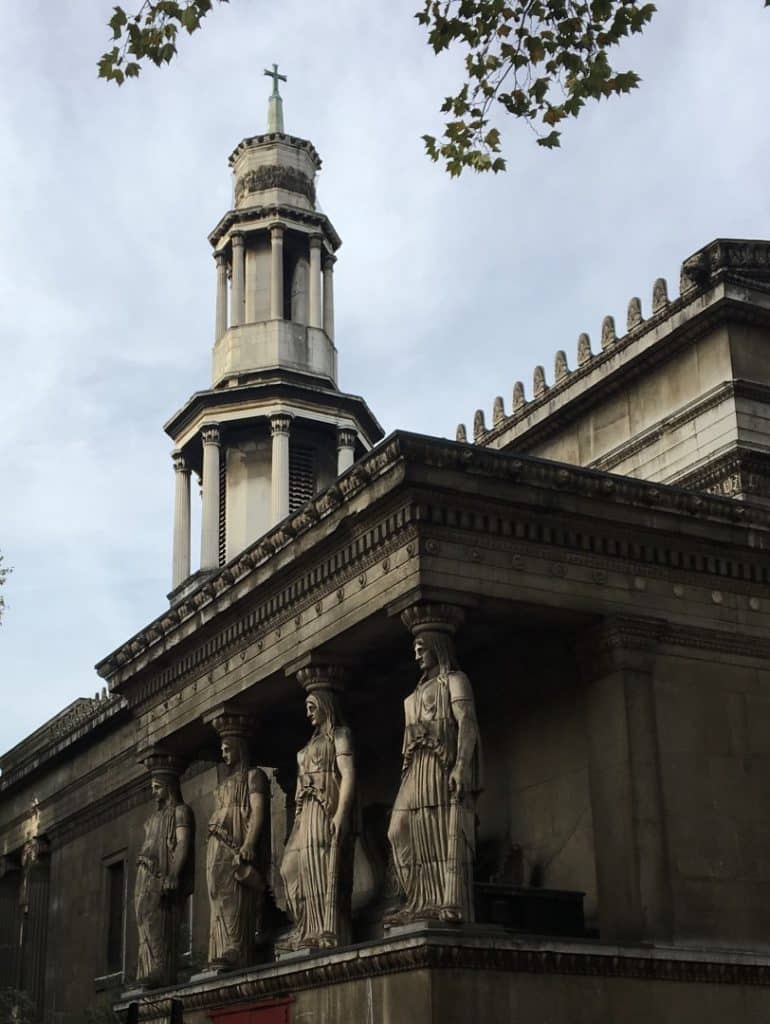 With that phrase in mind it’s a little surprising that the steeple seems very influenced by ‘heathen’ Ancient Greek architecture. Its round stacked temples look like textbook Roman shrines. Then to top it all off you get the wonderful caryatids (women-as-columns) which are a direct influenced from a 5th Century BC Greek temple for the mythological figure King Erichthonius.

Click on the map below to see the location of London’s strangest church steeples;