There are thousands of statues in the capital. The majority are pretty dull. Long forgotten war heroes or monarchs we vaguely remember. However there’s a handful of seriously odd ones, this is my collection of London’s strangest statues. 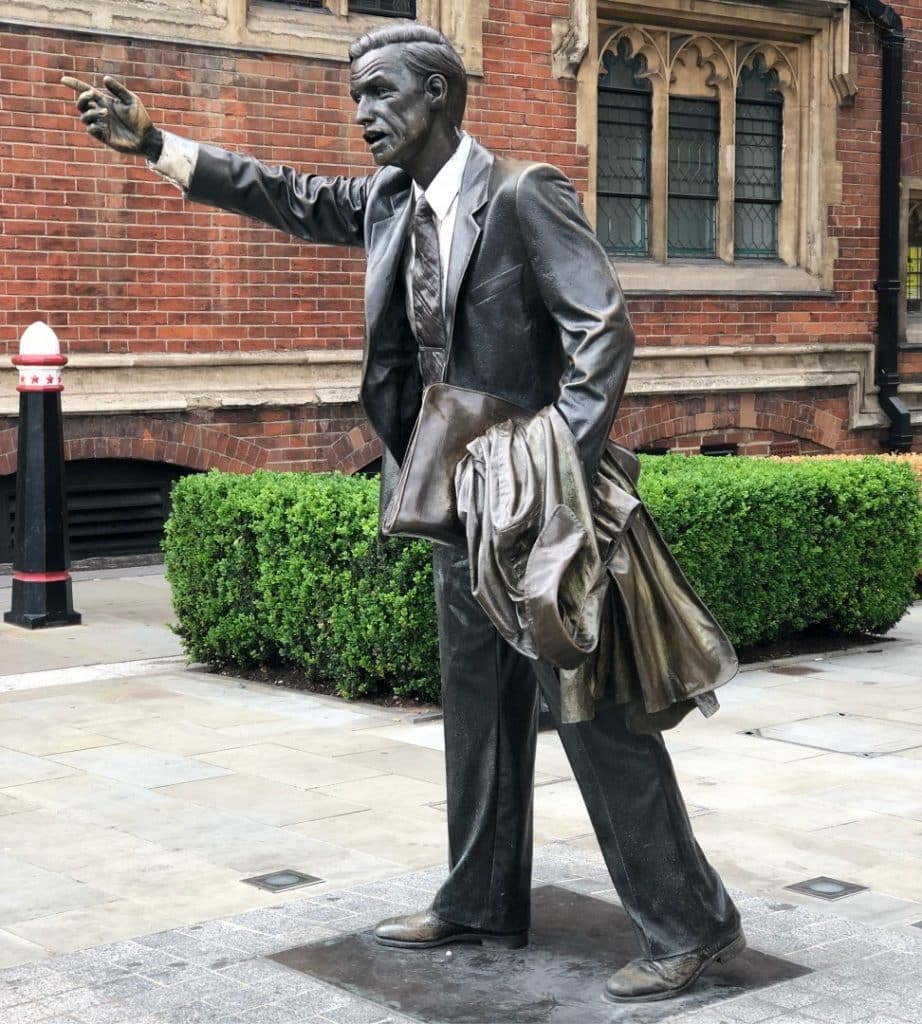 ‘Taxi!’ by Seward Johnson Jr (1983) can be found on John Carpenter Street, Victoria Embankment and if you stand there long enough you’re bound to see someone walk into him (or a black cab pull over to pick up a fare!)

It’s one of 6 casts made by the American Artist and heir to Johnson & Johnson, a curious coincidence then that it stands a stone’s throw from the HQ of their biggest competitors at Unilever House.

You’ve probably seen the fourth plinth in Trafalgar Square, but London has a second empty plinth.

It used to house a 1770 equestrian statue of William, Duke of Cumberland. He was known as the ‘butcher of Culloden’ after his brutal response during the Battle of Culloden (1746). The fight was between Jacobites; those in favour of restoring the Stuart monarchy, and government troops led by the Duke.

1,500 men were slaughtered in less than an hour, more than 1,000 of them Jacobites. The Duke also ordered his soldiers to charge down fleeing highlanders. Classy.

So by 1868 the statue was dilapidated, unloved and eventually removed and never replaced.

At the end of Bow Road in East London stands a statue of former Prime Minister William Gladstone, but take a closer look to spot his red hands.

Legend has it that during the 1888 Bryant and May match factory strike, women (who had walked out over dangerous and unfair working conditions) smeared their own blood on Gladstone’s hands as a protest to his indifference.

Today it’s regularly replenished with rust-coloured paint which – unless anyone wants to own up to the guerrilla art – is one of London’s mysteries.

Another example that you should always look up! This is The Window Cleaner by Allan Sly, installed 1990.

The anonymous window cleaner approaches a building, looking up in exasperation at the size of the skyscraper in front of him (especially when we consider he’s only equipped with a small ladder!)

Sometimes, a statue really makes you stop and take a second look… 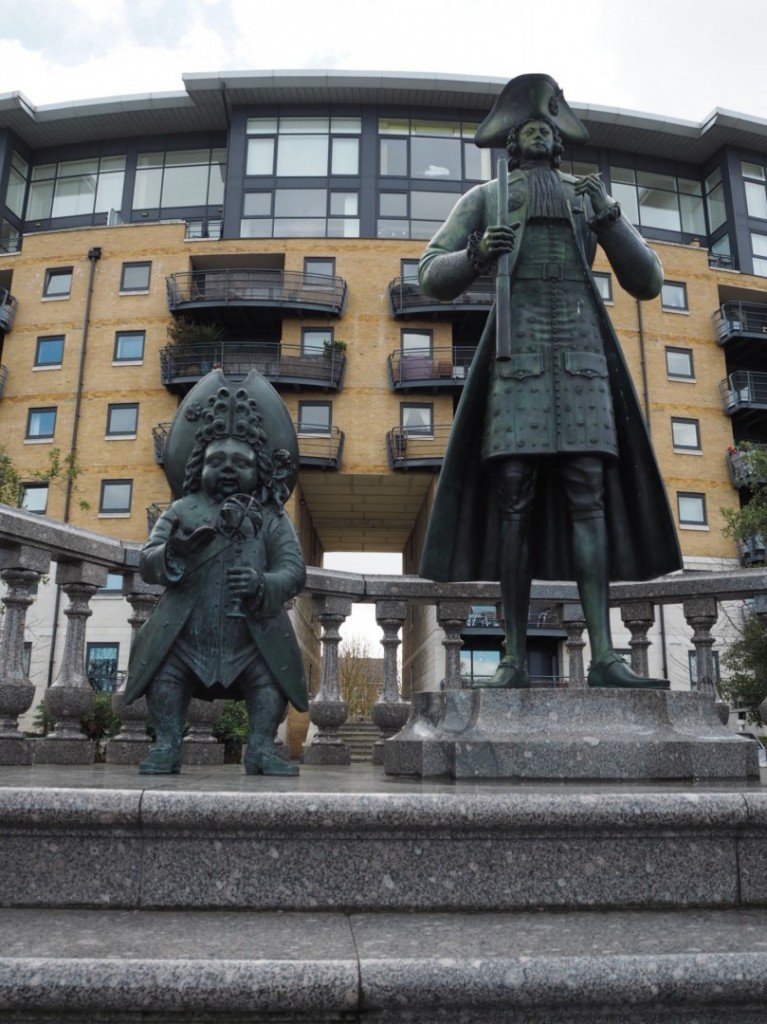 On Glaisher Street in Deptford you’ll find a memorial to 1698, when Tsar Peter the Great lived in London for 3 months to learn shipbuilding.

He rented John Evelyn’s House in nearby Sayes Court as an attempt to stay incognito, but a 6 ft 7″ flamboyant and heavily accented Russian was never going to stay a secret for long.

The pretext of his trip a Western Europe tour to learn techniques to bring back to Russia’s feudal system, but – as a heavy drinker – he seemed more concerned with drinking and debauchery.

Evelyn must’ve regretted allowing Peter to rent his home. The carpets were soiled, 50 chairs were destroyed and the paintings were used for target practise. To cap it all off, Evelyn’s prized holly bush was rammed through by a wheelbarrow, apparently with the drunken Tsar sitting inside! All in all, Peter’s entourage inflicted £350 of damage, paid out eventually by Christopher Wren on behalf of the Treasury. So basically every AirBnB host’s worst nightmare.

The sculpture was unveiled in June 2001 by Prince Michael of Kent and according to the inscription is near the Royal Shipyard where Peter studied.

Not sure whether you can call this a sculpture or a statue, but in any case it’s pretty unique. 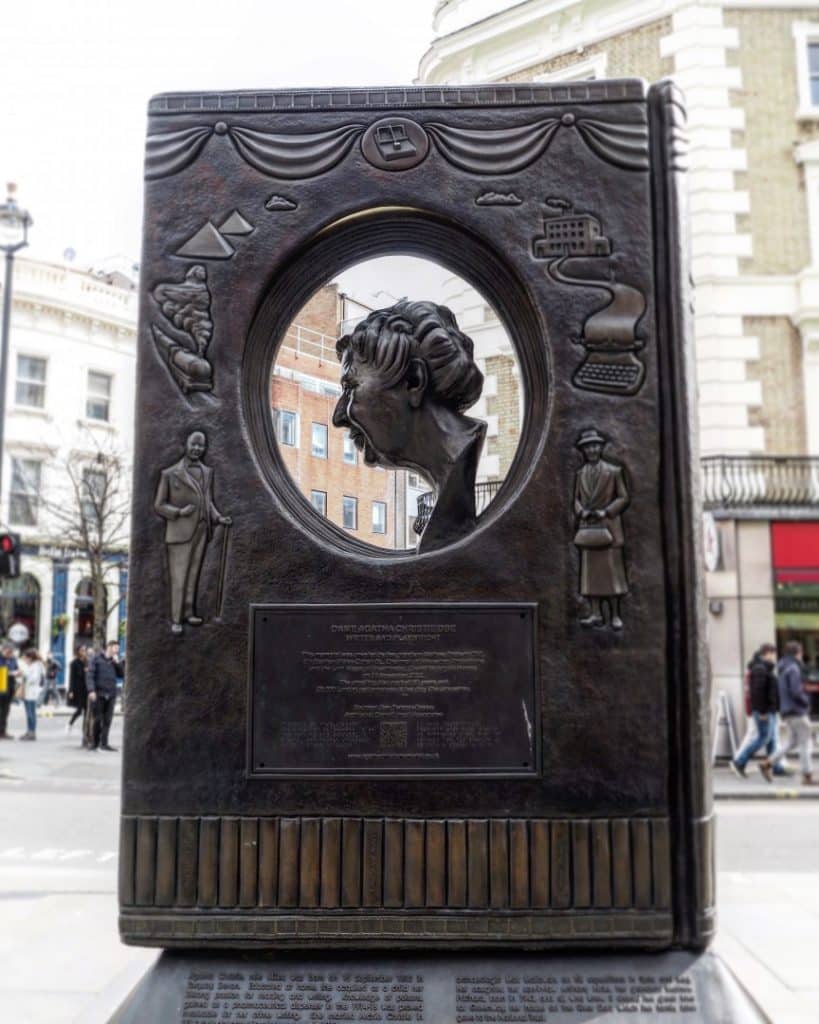 On 18 November 1952 Agatha Christie’s Mousetrap had its official opening performance at The Abassadors Theatre, London. This sculpture by Ben Twiston Davies was installed in 2012 to celebrate the 60th Anniversary.

Christie fans will be able to spot little clues to a lot of her stories. My favourite? The mousetrap at the top!

This pair of playing children can be found in Duke of York’s Square, Chelsea and is by Alister Bowtell, unveiled 2002. 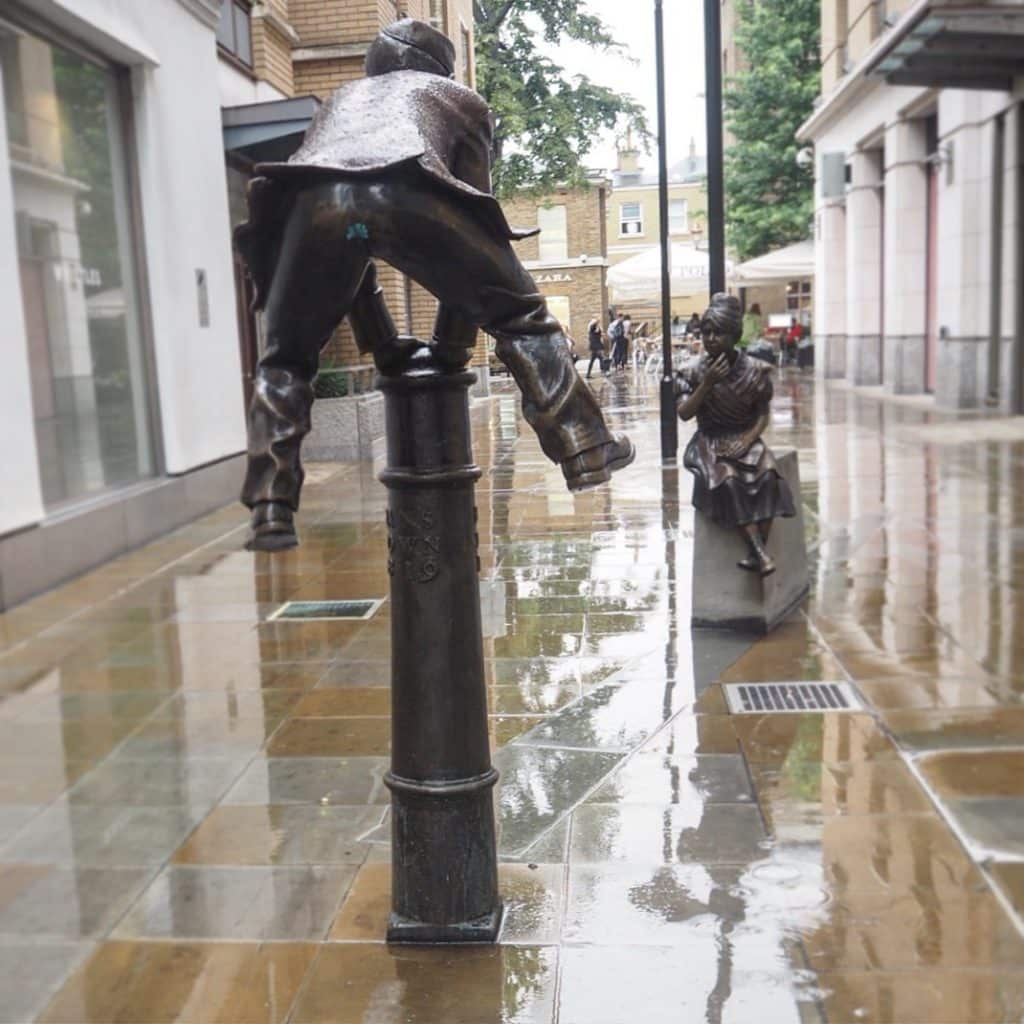 They represent the Royal Military Asylum which took in army children. The RMA was first established on this spot and still exists as a school today but in Dover, Kent.

For reasons I’m not aware, the young girl has recently been removed. I hope she returns and if anyone knows anymore info, please share in the comments!

I couldn’t not mention one of my favourite elusive street artists; Jonesy. 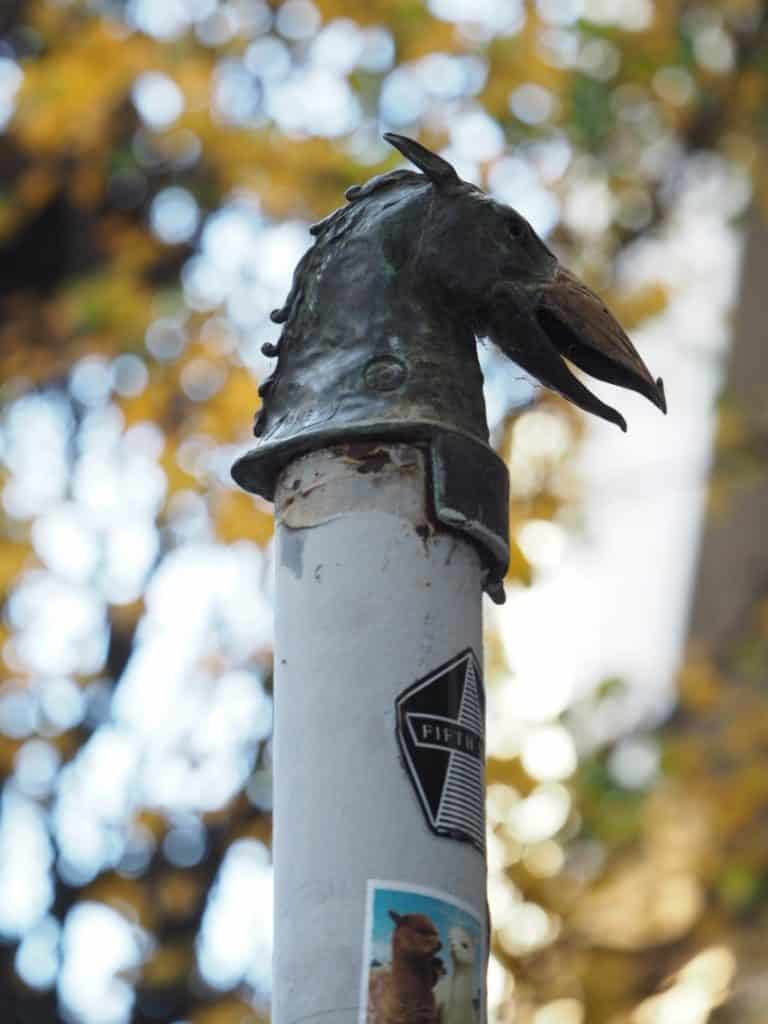 A bit of an eco-warrior, Jonesy’s work often has an environmental theme and his tiny works are a joy to spot in East London. He works (or at least has connections) with a bell foundry – which explains the access to cast bronze.

Monument to An Unknown Artist, Bankside

A 2007 project by the artist collective, Greyworld, this animatronic sculpture moves to recreate the pose of passersby. 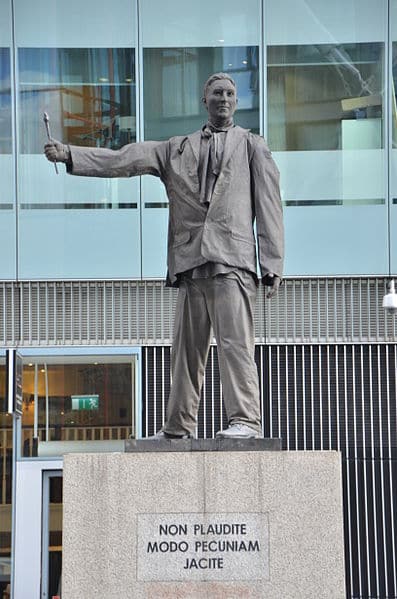 Although it didn’t seem to work the last time I was walking past, it’s a bizarre feeling when you see a seemingly bronze, lifeless sculpture move suddenly out of the blue!

Click on the map below to see the location of London’s strangest church steeples;

And if you have any other suggestions, let me know in the comments below!