Why Strawberry Hill House is Well Worth a Visit

in Interiors, London, Quirky Museums, Things to do in London
3 Comments

Created as a summer villa between 1748 and 1790, Strawberry Hill House is one of the earliest and finest examples of the Gothic revival style. It’s so brilliantly OTT that it’s even coined it’s own style; Strawberry Hill Gothic.

Just look at it… 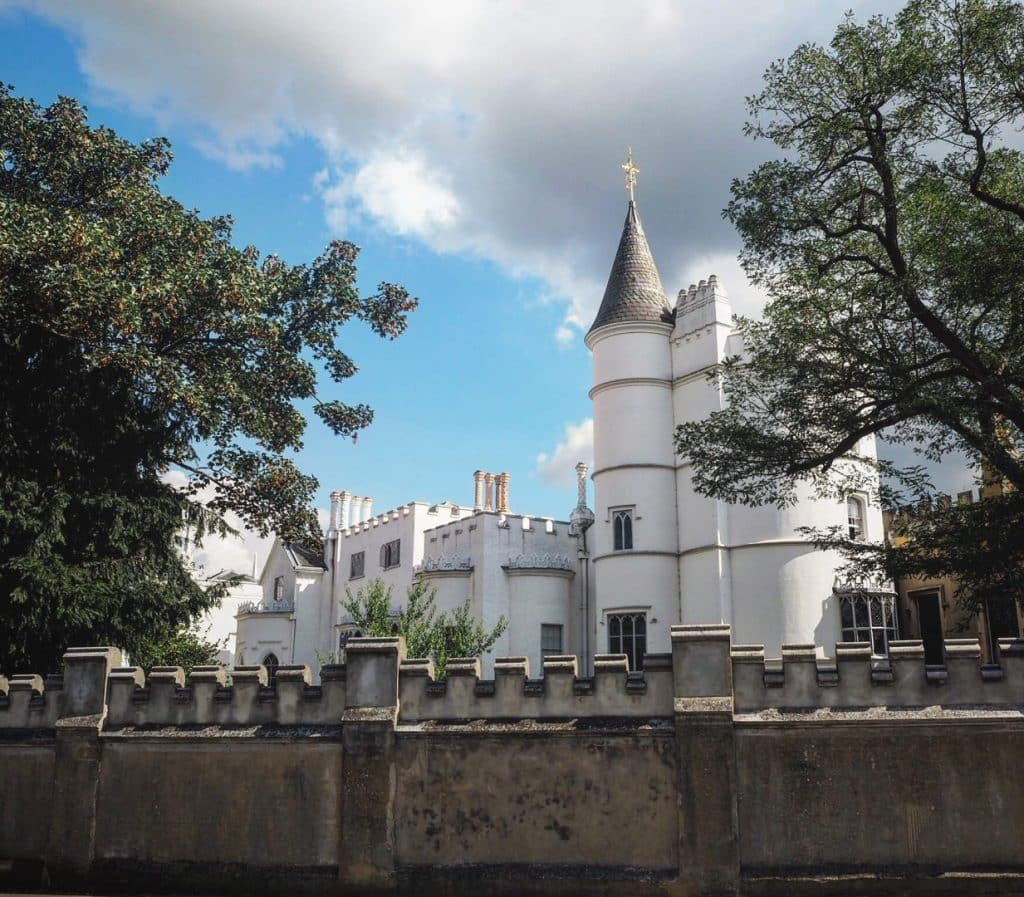 Built in stages on an irregular plan, it aimed to give the impression of an ancestral castle, built by successive Walpole generations. 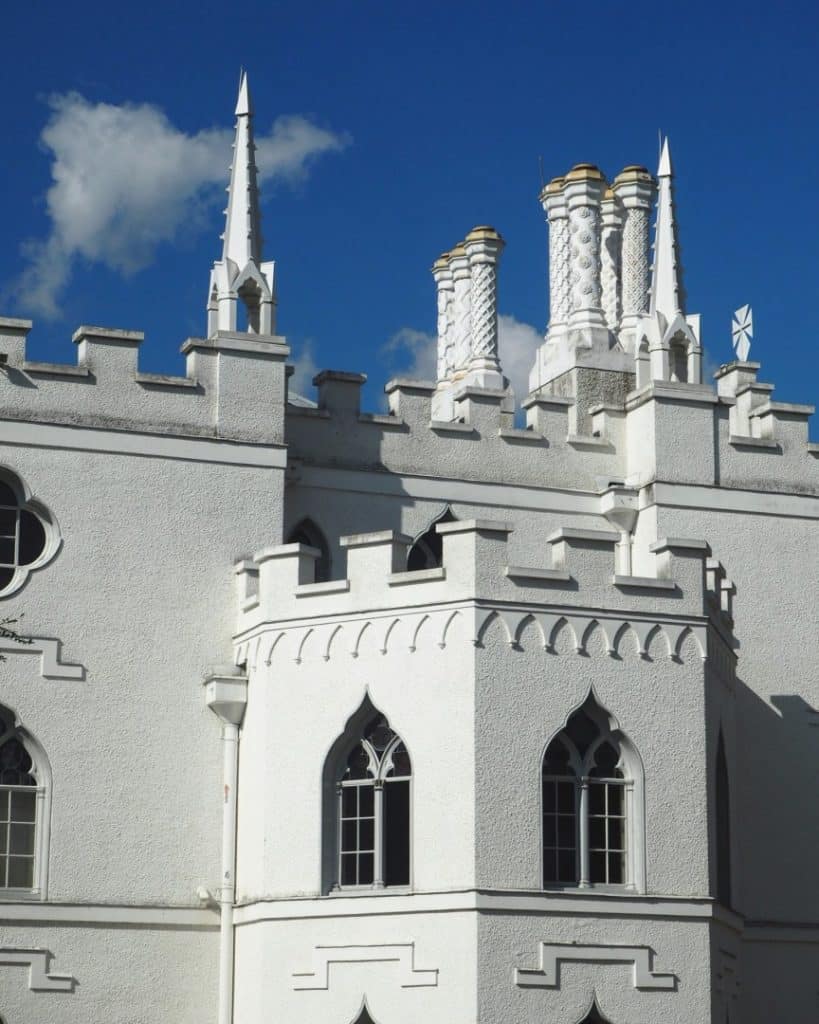 He was so convinced of his incredible house that he printed a booklet to guide visitors around it, assuring them that it’s not for public sale (“that would look like arrogance!”) but it was meant;

“only to assist those who should visit the place”.

When visiting you’re given one of these printed booklets (complete with modern commentaries) adding to the theatrical nature of the house.

Admission ticket to a private view, 1842

People were encouraged to visit, but on strict terms. You must book in advance, in a maximum group of four with strictly no children. Walpole would gladly take you around the house for free but if he was indisposed you had to pay a small charge for a servant to take you around.

Walpole specifically intended you to enter through a gloomy hall, heading to a heavy, carved staircase which provides the only light – from above – for maximum drama. 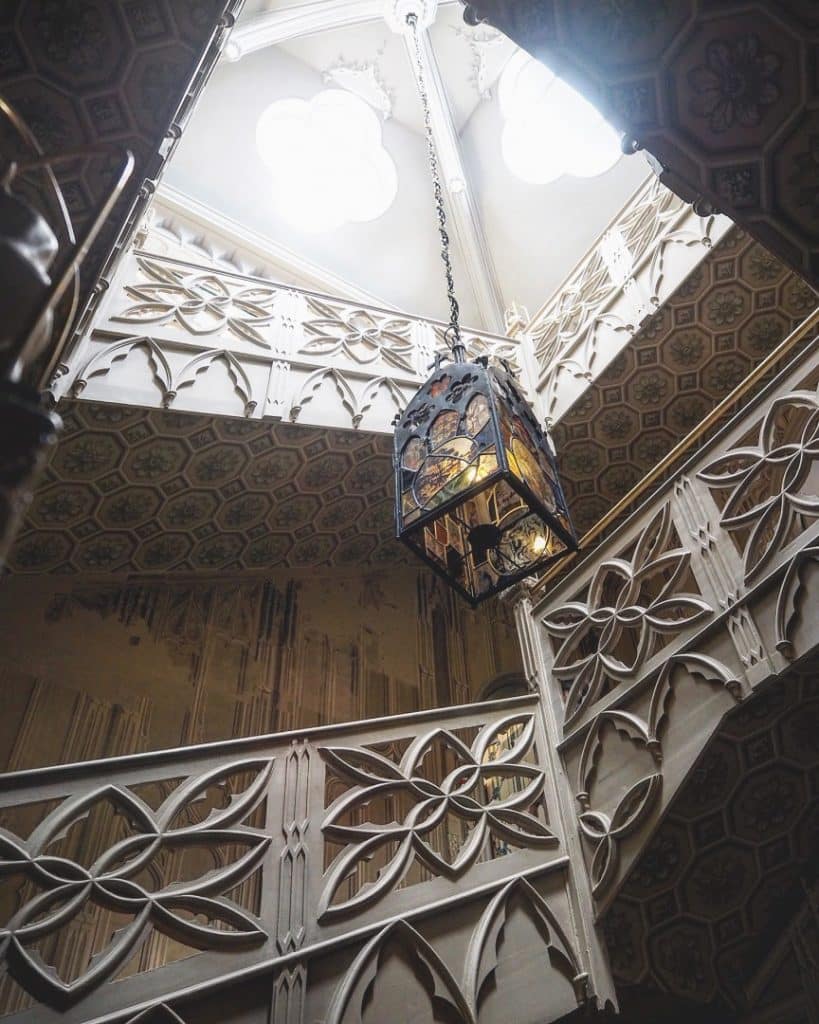 The theatre continues as you walk around the house, the whole route cleverly curated by Walpole who was working within a group calling themselves, modestly, ‘The Committee of Taste’.

Though it looks pretty modern now, the Holbein Chamber was re-painted it’s original ‘royal’ purple colour to complement the Tudor courtier pictures that hung on the walls. The alcove behind the  screen used to contain a bed on which hung the red hat of Cardinal Wolseley!

Walpole was an avid collector, anything unusual or with historic value was added to his eccentric collection. Sadly, in 1842, the owner of Strawberry Hill House – suffering with gambling and alcohol addiction – had to sell most of the objects. They’re now scattered across the country.

But back to the house…

Even the cupboards are fancy!


Made by Frances Lady Waldegrave when she redecorated Walpole’s bedroom in 1856. The luxury, hand-made flock wallpaper was very fashionable at the time. To use it within a cupboard too was pretty excessive!


Although not a lot of the original furniture survives, reproductions have been added to give you a flavour of the ornate additions in each room. These chairs are faithful copies of ones designed by Mr Bentley and Walpole himself, their pattern reflecting the gothic windows in the room and house itself. The originals are now in the V&A.

The Tribune gives us a tantalising hint at the fan vaulted finale awaiting us.

And below is the ceiling, taken from the chapter house at York;

“The roof is terminated by a star of yellow glass that throws a golden gloom over the room, and with the painted windows gives the solemn air of a rich chapel.” – Horace Walpole

As much as these interiors are inspiring, it’s also the small details that are a treat, like the specially designed, one of a kind lock on the The Blue Bed Chamber;

But it’s really the The Gallery that takes your breath away.

The ceiling, with elaborate fan vaulting is based on one of the side aisles of Westminster Abbey’s Henry VII’s chapel.

Walpole, not know for his modesty, stated that;

“I begin to be ashamed of my own magnificence.”

I hope these pictures have inspired you to plan your own visit, or perhaps you’ve already discovered it yourself? Let me know in the comments…

The nearest station is Strawberry Hill

Find out more and book here. (It costs £12 for an adult and £6 for concessions)