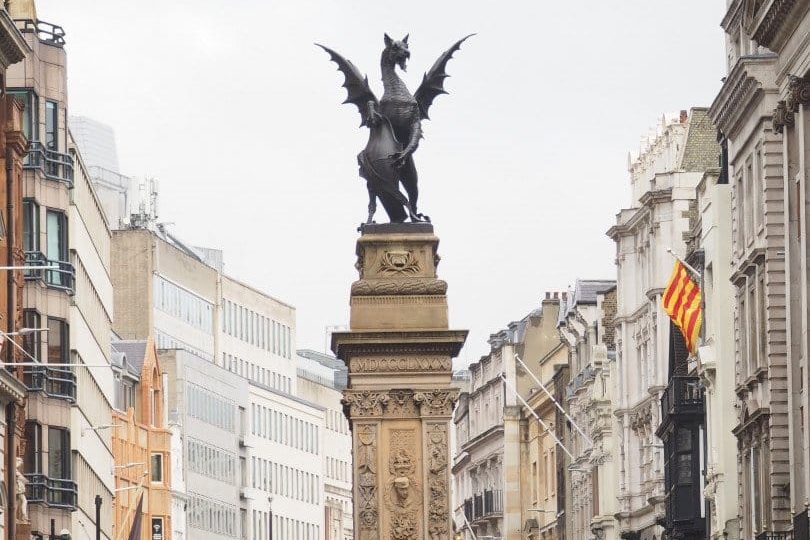 Marking the boundary between Westminster and the City of London is Temple Bar Memorial. As the name suggests, it’s a reminder for something far older that stood in its place.

So what’s the history of Temple Bar and have you admired all the details on Temple Bar Memorial?

The first record of Temple Bar is apparently 1293, so claim the City of London, though where it was mentioned I’m not sure.

It was probably just a bar or chain across the road as this was never part of the fortified Roman City of Londinium. The City expanded Westwards, crossing the River Fleet during the Medieval period.

After the Great Fire of London Temple Bar was rebuilt, an impressive stone gateway which – amazingly – still survives today.

Its design is attributed to Christopher Wren (although that’s not totally rock solid). Historic England says it was built 1670-72 by Joshua Marshall and Thomas Knight with the involvement of Wren.

Today Temple Bar no longer marks the entry into the City, since 2004 it’s been sat half a mile east, a rather grand entranceway to the modern Paternoster Square.

It was removed from here in 1878 and spent the intermediary years in Theobalds Park, Hertfordshire (but that’s another story!)

It’s surmounted by the scariest-looking of all the dragons that guard the entrances to the City of London and was designed by Charles Birch. Fearsome though it might appear, it’s a big improvement from the gruesome sight of heads on spikes that crowned Temple Bar until 1746.

There’s some argument over whether it’s a griffin or a dragon (Pevsner and Historic England say griffin). But personally, I think it’s unmistakably a dragon. Griffins have feathers and an eagle’s head. This guy is far too scaly and has a very reptilian-like tongue.

But let’s have a look at the details. In its claws it clutches the shield of the City and a banner of its motto; Domine Dirige Nos (Lord, Direct Us).

At the thin, East and West, sides of the stone plinth are delicate carvings depicting Peace and War

The young face is Prince Albert Victor, Grandson of Queen Victoria who died of Influenza aged 28. The bearded figure was the Lord Mayor in the year it was erected; 1880.

While on the North and South sides are sculptures of Queen Victoria and her Son Prince Edward (later King Edward VII) by Joseph Boehm.

They were chosen because they were the last Royals to enter the City through the original gateway and are both surrounded by symbols of art, literature, industry, science and music.

Victoria holds the orb and sceptre, symbols of her power as monarch and part of the Crown Jewels.

Above Victoria are further important ceremonial objects; the Sword and Mace. These are symbols of the authority of the City and of its head; the Lord Mayor.

Confusingly, this is not the sword most associated with Temple Bar.

Ceremony of the Pearl Sword

In the Ceremony of the Pearl Sword (gifted to the City by Queen Elizabeth I) the monarch’s carriage stops by Temple Bar where the Lord Mayor presents the sword (hilt first!) as a symbol of loyalty to the monarch and then the Monarch gives it back.

There’s a painting showing Queen Elizabeth II conducting this ceremony with the dragon of Temple Bar Memorial just visible through the coach window.

The Queen doesn’t have to ask permission to enter the City in any real sense, that myth is probably thanks for this ceremony.

But the best details on the Temple Bar Memorial are along the base.

The mythical giant guardians of the City of London. They appear to have once held staffs but they’ve been cut short or knocked off over time.

Queen Victoria’s Progress to the Guildhall

Designed by Charles Mabey in 1837, this shows Victoria’s first visit to the City. She’s in the state coach and surrounded by cheering crowds, while a pupil from Christ’s Hospital school kneels at her feet.

The other side (Charles Kelsey, 1872) shows Queen Victoria and her children going to St Paul’s for a service of thanksgiving after the Prince recovered from a bought of typhoid.

Finally, on the east side we have an image of the original Temple Bar in situ, where Strand meets Fleet Street. It’s flanked by the figures of fortune and time, holding what appears to be stage curtain.

I like the way it’s ambiguous as to whether they open them with a flourish or whether they’re slowly pulling them together, ending this chapter of the memorials’ story.