A Closer Look at The Monument

in architecture, City of London, London, Look Up London
2 Comments

I often feel like The Monument deserves a little more attention. It’s historic, beautifully built, and offers fantastic views over London. However, it usually plays second fiddle to the larger attractions close by, overlooked by tourists and Londoners alike. 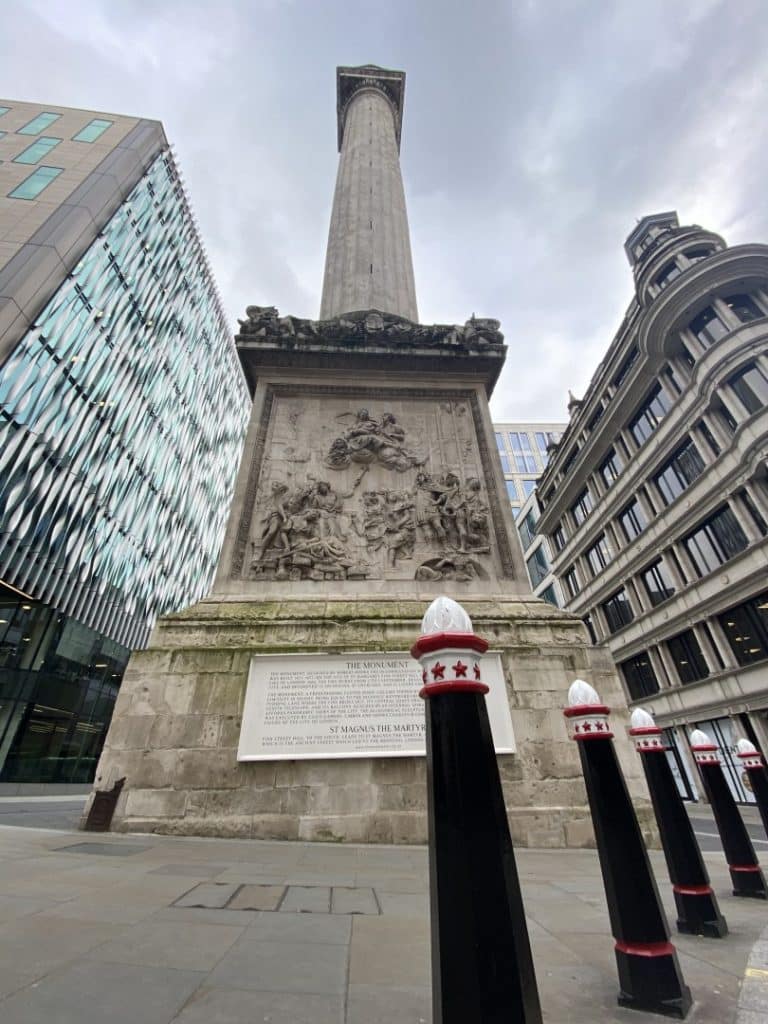 I have to admit too, that despite visiting multiple times, I’m not sure how much appreciation I’d given to the fabulous carving around its base.

But if you do take a closer look there are many rewards. first off though, what exactly is it?

Built between 1671-6, the Monument commemorates the Great Fire of London in 1666. It stands at 62m high (10m taller than Nelson’s Column in case you were wondering) and is the tallest isolated stone column in the world. 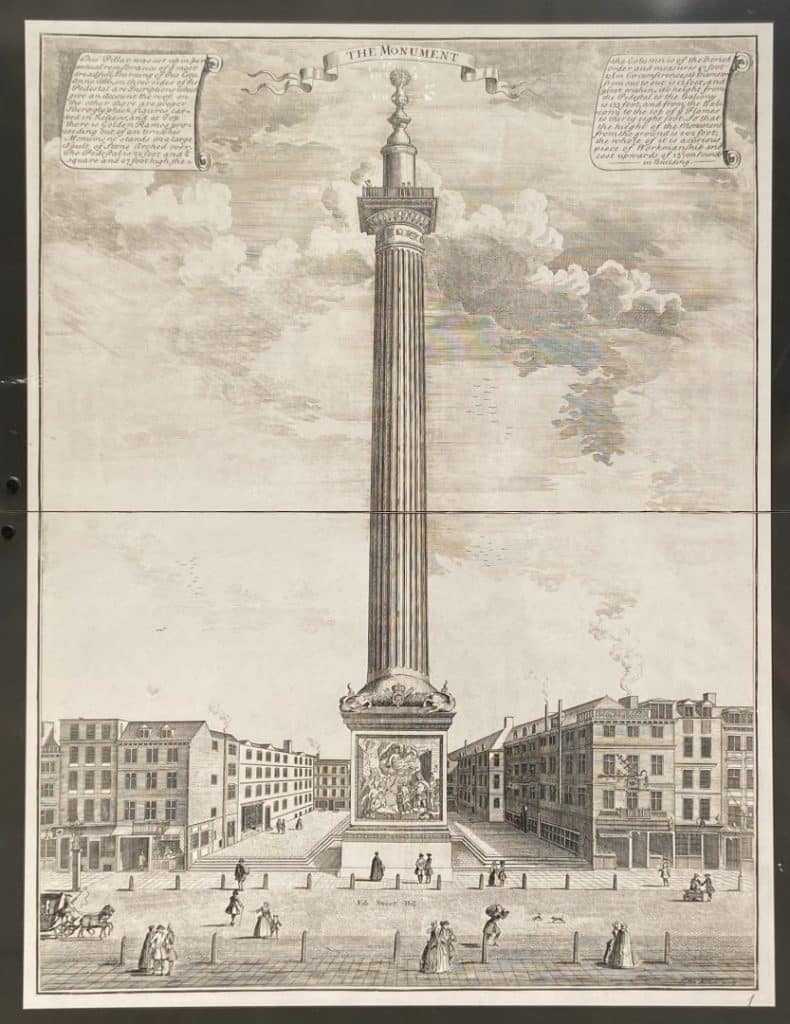 Common consensus is it was designed by Christopher Wren and Robert Hooke. Hooke was a scientist, architect and all-round polymath like Wren. In fact, people are still arguing that perhaps he had more responsibility for the planning, there’s even evidence the whole thing was one big scientific experiment.

But back to the base…

The large relief carving is by Caius Gabriel Cibber, the sculptor of choice for many of Wren’s buildings. 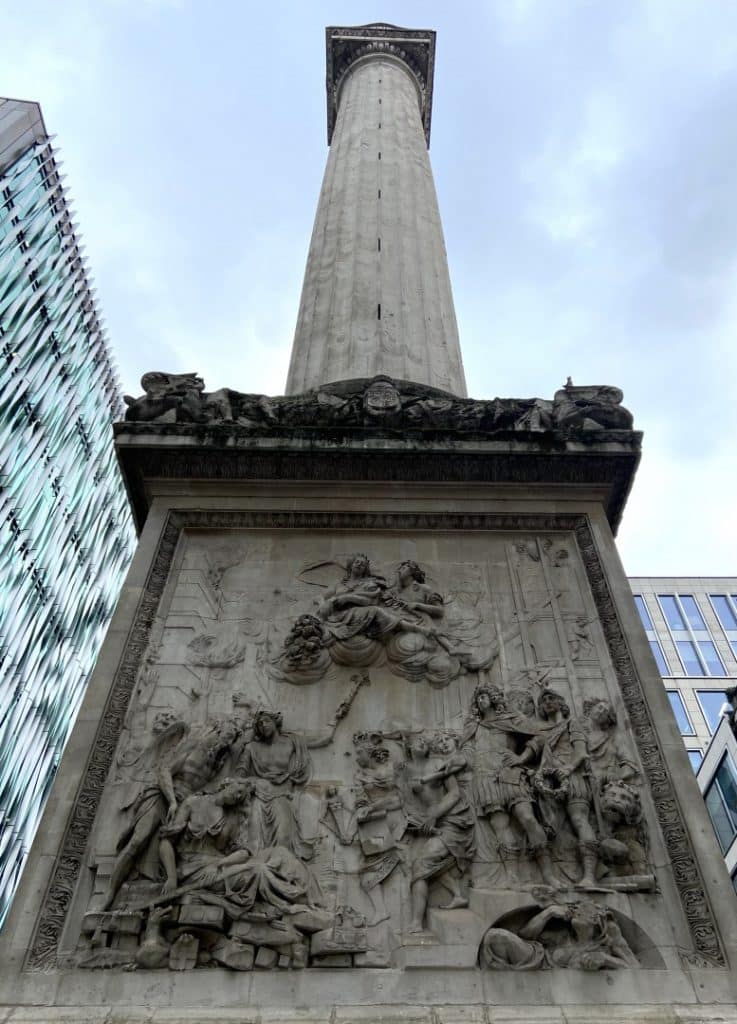 It depicts the City personified on the left, in despair at her ruin. Meanwhile King Charles II stands majestically on the right, directing the rebuilding of London. 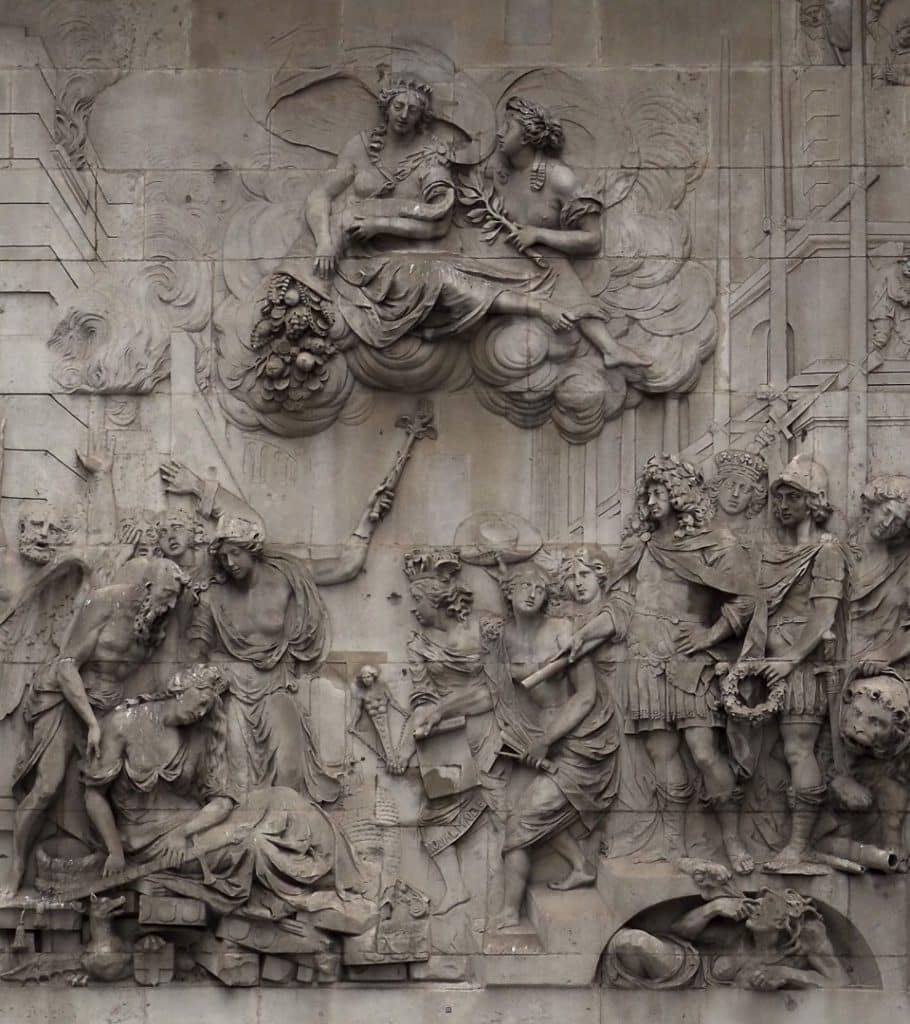 Evidently, the City of London is not in a good way, she’s being comforted by a bearded figure of Time while frantic Londoners shriek and panic behind her, smoke billowing behind them. 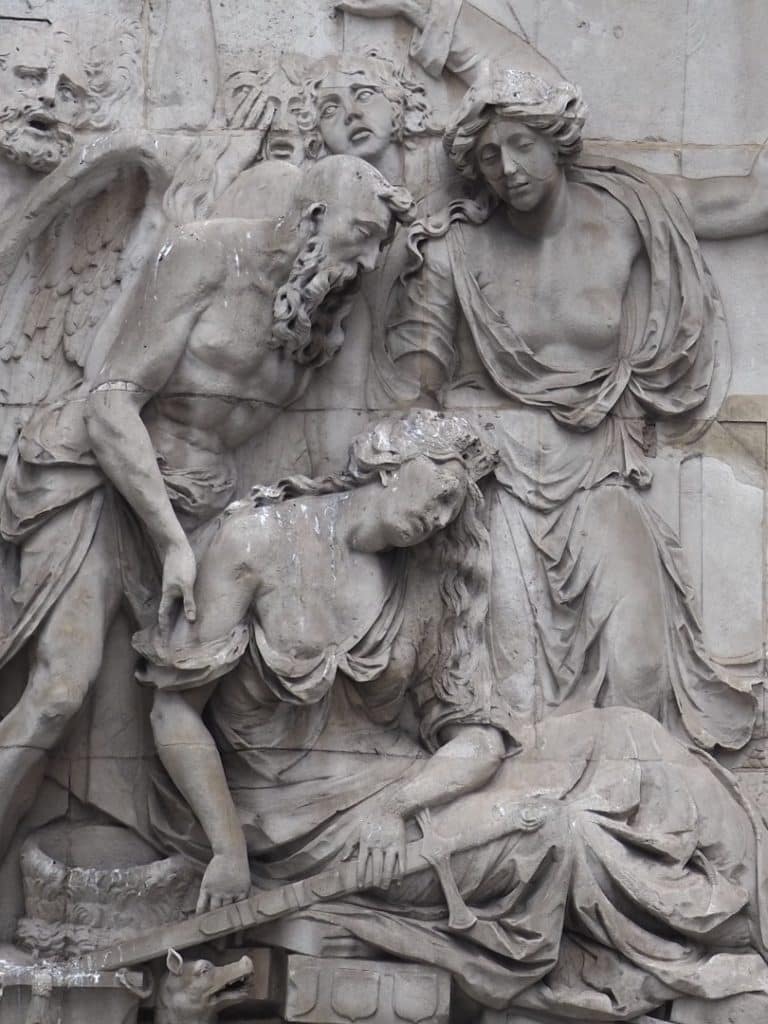 Attempting to perk her up a bit, another allegorical female gestures to peace and plenty hovering on clouds above. 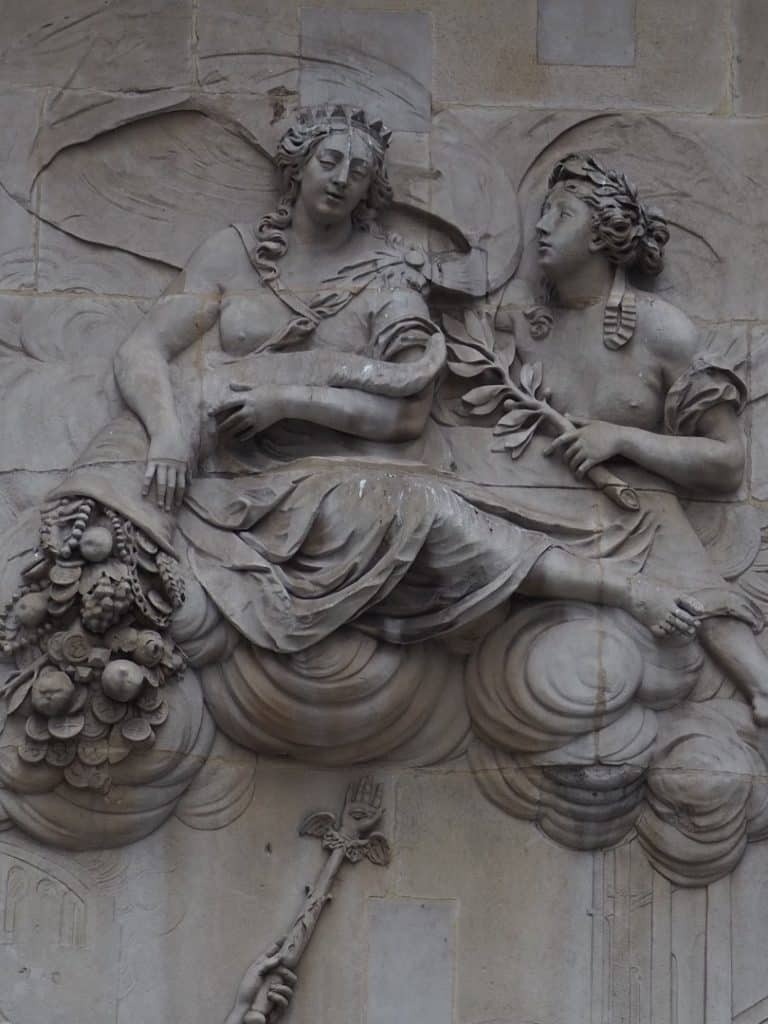 What the figure is holding is surprising, a kind of rod with a winged palm containing an eye. Perhaps it’s an allusion to the Hamsa hand, seen across Abrahamic religions as a symbol of protection? In any case it seems excellent fodder for conspiracy theorists! 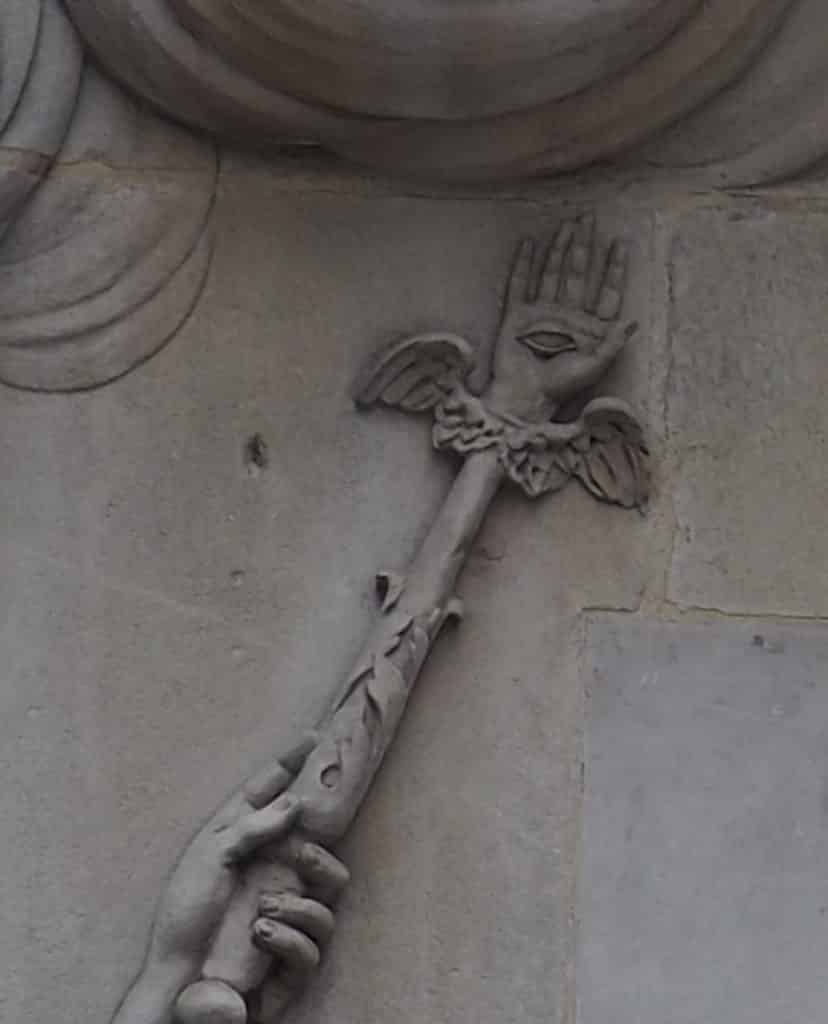 On the right, thank goodness! Finally, a bit of order and management. Here is King Charles II, hand on hip, directing science and architecture to crack on a rebuild the city. 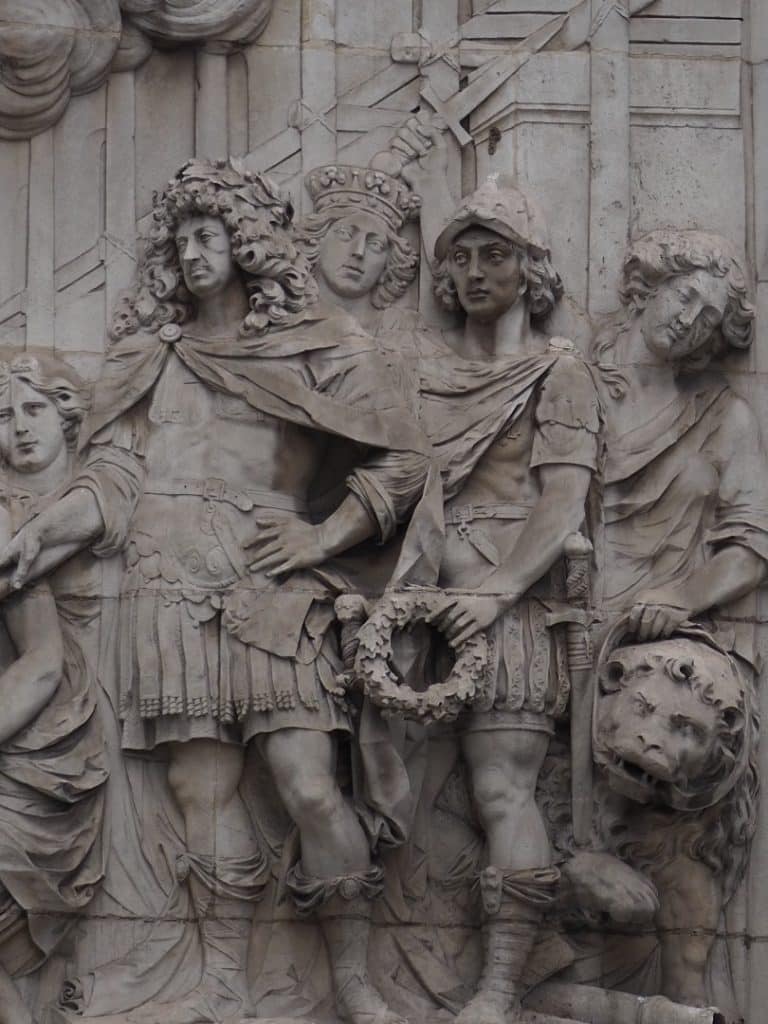 After being criticised for his handling of the Plague in 1665, Charles and his brother James (later King James II) were hailed as heroes during the Great Fire, rolling up their sleeves and helping to pull down houses to stop the spread.

A little flattery can get you everywhere… 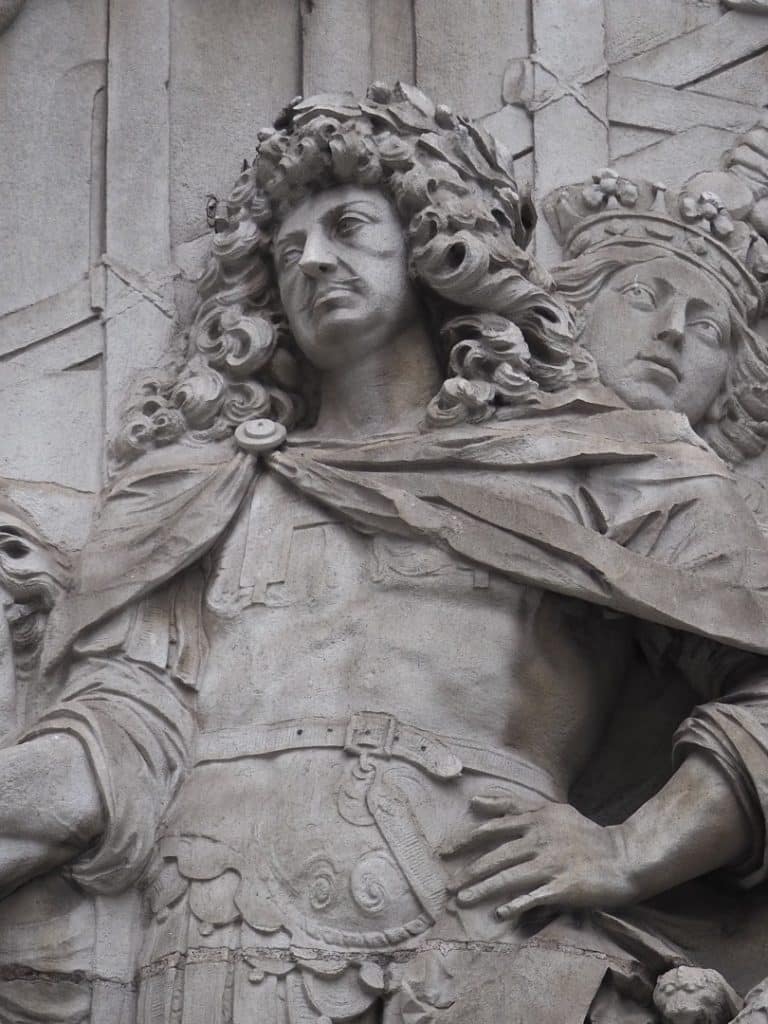 Londoners can breathe a sigh of relief, progress is already underway behind him. 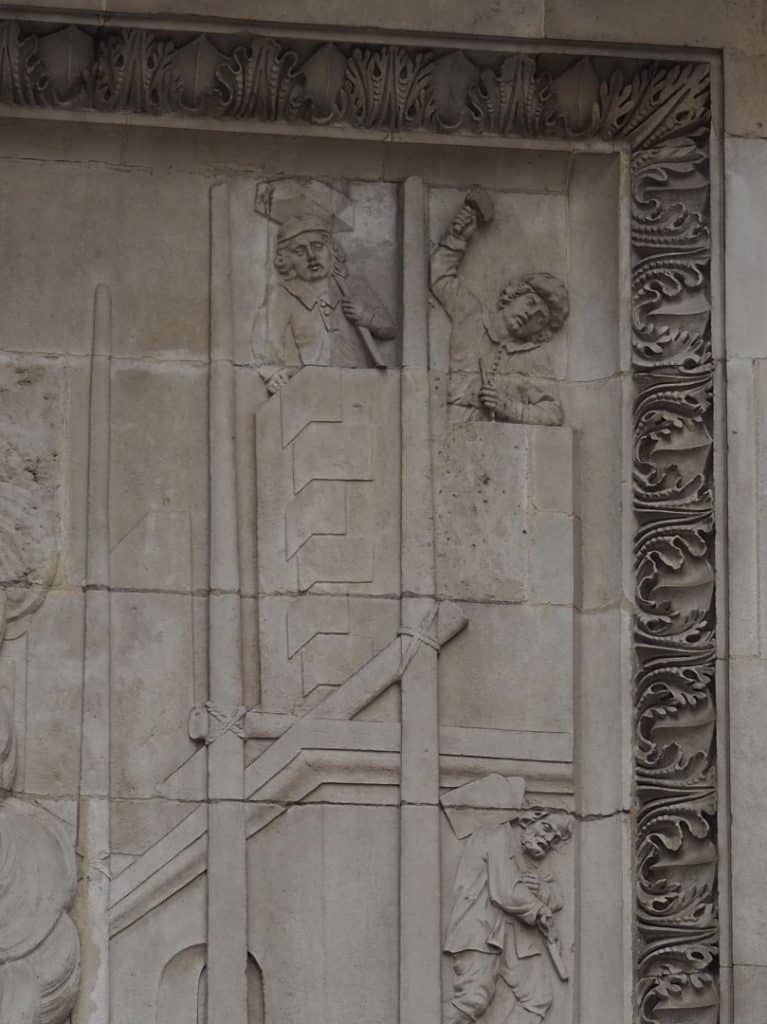 An unhappy lion is tethered to one side, 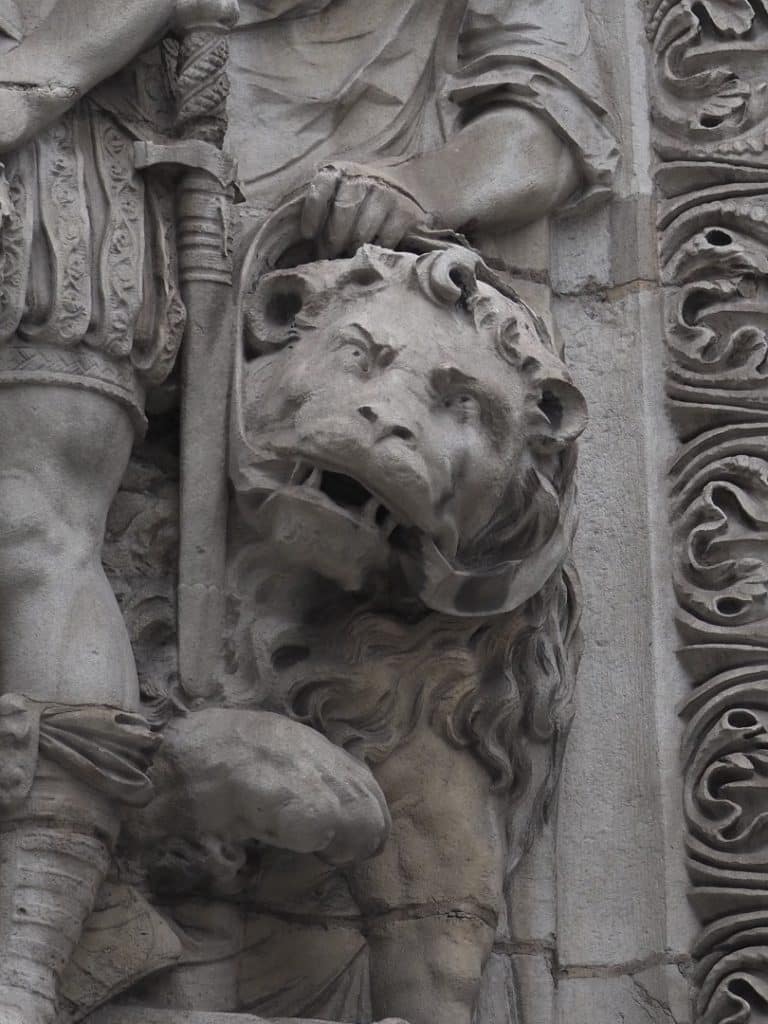 while the hellish figure of fire is creeping back into whatever dark place she came from, sucking back her damaging flames. 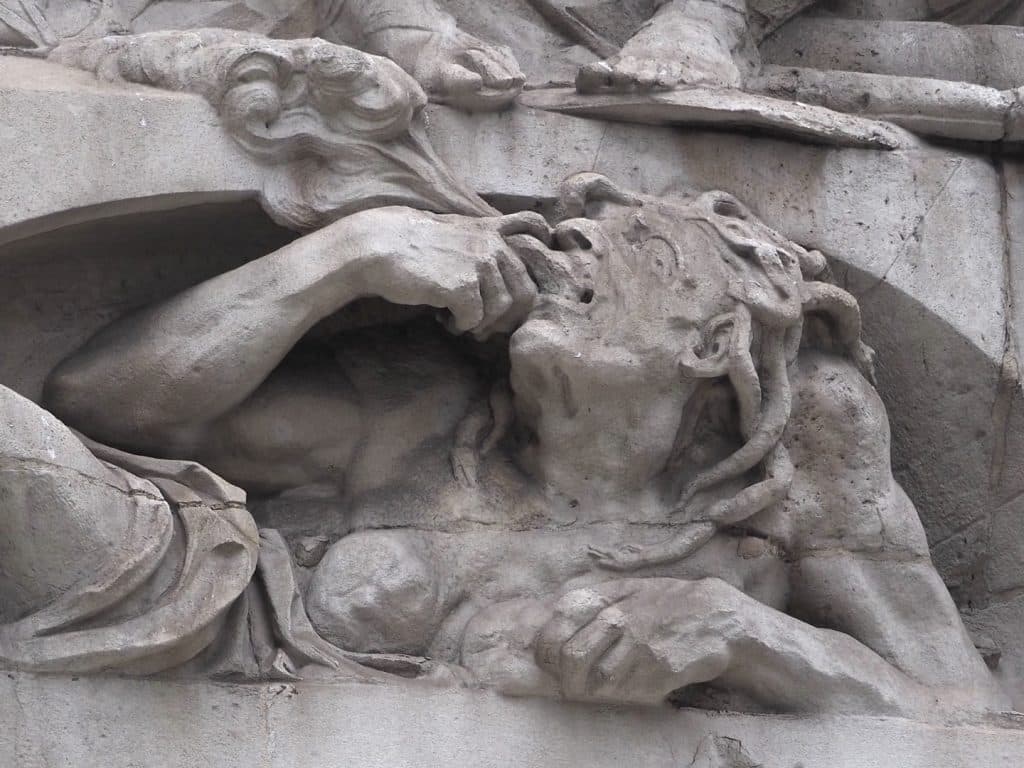 On the other side at the bottom is a cute little dragon, symbol of the City watching everything unfold with bemusement. 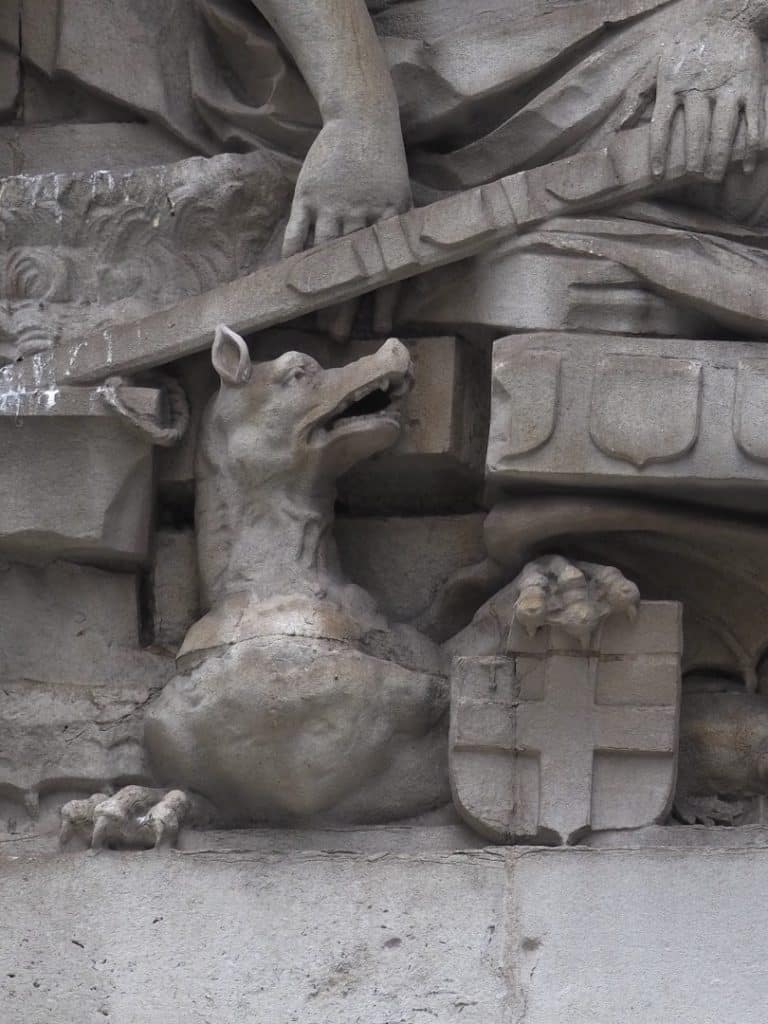 There are also fearsome dragons on each of the four corners, carved by Edward Pierce under master mason; Joshua Marshall. They encourage you to talk stroll around the circumference of the base. 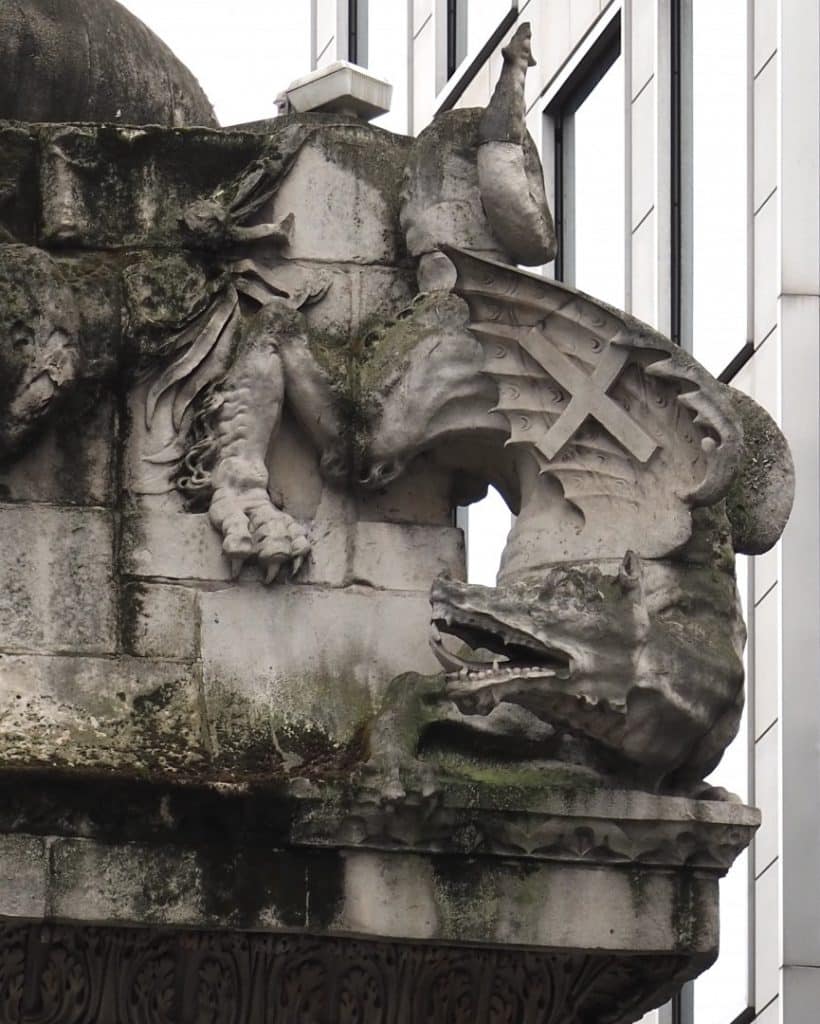 On the three other sides there are a Latin inscriptions describing the events of September 1666 and the rebuilding of the city. You can read the full transcripts here. 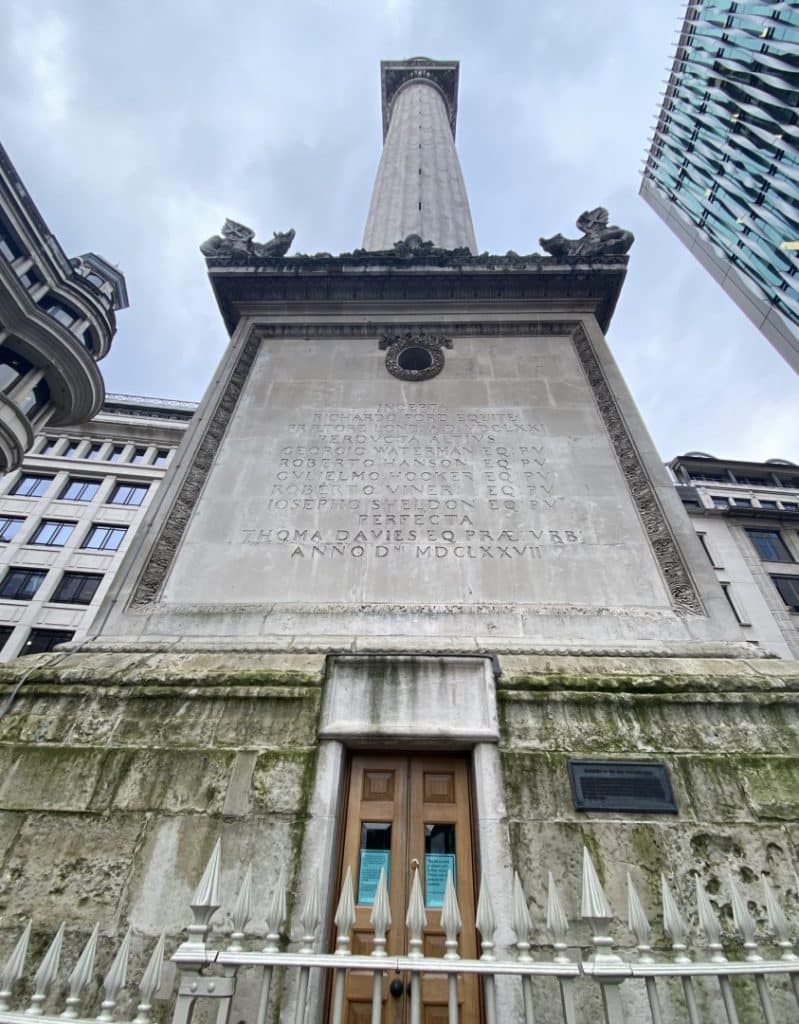 After the original carving, a post script was added in 1681, suggesting the fire was thanks to Catholics; “the fatal fire stayed its course and everywhere died out. But Popish frenzy, which wrought such horrors, is not yet quenched.”

This addition was removed in 1830.

Finally, if you’ve got the energy, you may want to brave the 311 steps to soak up the view. The wonderful spiral staircase also makes the climb worth it! 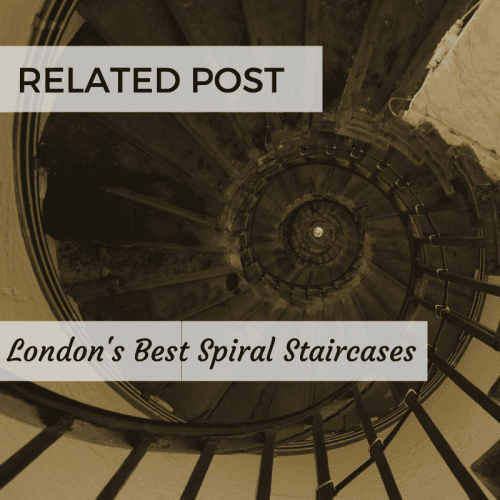 Top of The Monument

Crowning the Monument is a great ball of fire by Robert Bird. 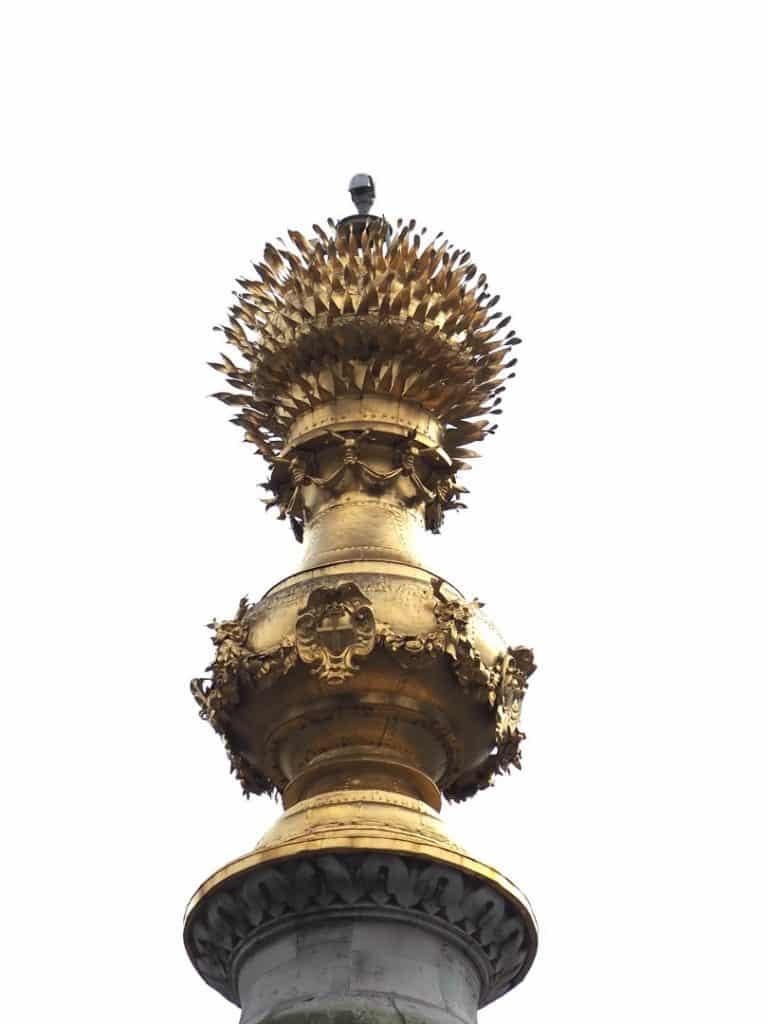 After considering his options, Wren decides against an allegorical statue or sculpture of a phoenix to top the column. He wrote in a letter on 28 July 1675 stating he thinks “a large ball of metall gilt would be most agreeable”.

So that’s what glints in the distance; “A ball of copper, nine foot diameter, cast in several pieces, with flamesin gilt”

I rather like Wren’s initial idea that Pevsner mentions; flames of gilt brass climbing all the way up the column as if it were still engulfed.

Maybe it would’ve been a bit OTT?

You can also enjoy a panoramic time-lapse of the view by Chris Meigh-Andrews here.

For the latest visitor information, visit their website here.