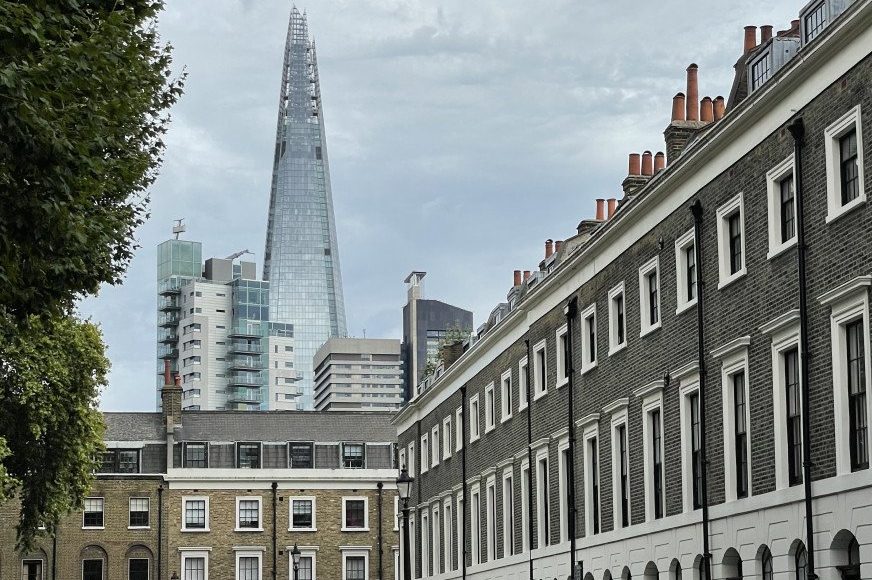 It was laid out in the early 19th century and seems simple enough, a lovely church and garden with surrounding terraced houses.

But, as ever, there’s plenty more history to uncover.

The name is a bit of a giveaway, but the Square is part of Trinity House Estate.

Trinity House is a maritime institution and charity which dates back to 1514. I’ve previously covered Trinity House (including a tour inside its HQ) in a blog post here.

In 1661 Christopher Merrick, a London Merchant, gave the land to Corporation of Trinity House. It was to be used to help the “poor aged sick maimed weak and decayed seaman and mariners” as well as their most needy wives, children and widows.

In the 1828 map below you can see development taking shape south of Trinity Street.

You can also find Trinity House’s coat of arms on Trinity Street, just off the square.

In the early 19th century the patch of land was largely rural, used for market gardens and grazing animals but development was underway from around 1813.

At the centre of the plan was Holy Trinity Church, with a garden in front and terraced houses around it.

The foundation stone was laid in 1823 by none other than the Archbishop of Canterbury. It was designed by Francis Bedford, the architect behind some of the other ‘Waterloo’ churches in South London and named after the government fund provided from the Battle of Waterloo victory in 1815.

The building was used as a church until 1961, however it was gutted by a fire and the interior was rebuilt in the 1970s.

Today its home to Henry Wood Hall, a recording studio and orchestral rehearsal space. You can see pictures inside here.

The garden was laid out by William Chadwick but the most extraordinary aspect is the statue in its centre.

This statue was – until recently – a bit of a mystery. It’s been here since the 1830s and its provenance is uncertain.

Historic England’s website (which is a little out of date) gives us two options.

Alternatively, it was made for the garden of Carlton House during the 18th century.

Most people agree that it represents King Alfred the Great, but the really intriguing thing is that a recent survey revealed that the lower portion of the statue is much older than previously thought.

Experts deduced that the legs dates from the 2nd Century AD and depict the Roman Goddess of War, Minerva (Athena in Greek Mythology).

The investigation also concluded that the top fragment of the statue was made from Coade Stone, something not invented until the 1770s by the entrepreneurial Eleanor Coade. There goes the Westminster Hall theory.

So perhaps it was a Coade stone copy of the older 14th century original? Or perhaps there was just a bit of urban myth-ing going on in the 18th century?!

In any case it’s Grade II listed and so not going anywhere soon.

However, it does mean that it probably can no longer be classed as London’s oldest statue.

So what is the oldest?

Aside from Cleopatra’s Needle (1460 BC) and another Egyptian artefact on New Bond Street, I reckon the crown should go to the 16th century one of Queen Elizabeth I on Fleet Street.

Back to Trinity Church Square, from 1824 Chadwick began work on the main square surrounding the church.

On the face of it the houses look totally uniform.

But on close inspection there are subtle differences with no.s 60-62. They are plainer, lacking the thick white cornice along the top and with arched brickwork around the windows rather than white window frames.

There’s a simple reason for the difference. They were completed first and by a different builder then incorporated by Chadwick into the terrace.

So who lived here?

Originally it was occupied by professional families, architects, ministers, an iron merchant and a publisher.

This little enclave paints a very different picture to the wider Borough area in the 19th century. If we look to the Booth Poverty maps, completed later in the century we can see the red ‘middle class. Well-to-do’ are cheek by jowl with the dark blue ‘very poor’ and black ‘Lowest class. Vicious, semi-criminal’.

Southwark’s Conservation Area appraisal calls it a “wealthy oasis amongst a sea of poverty”.

Looking at these (and these) pictures from 1951, very little has changed.

Today Trinity Church Square is a Conservation Area and currently a 2 bedroom flat within the square (because I know we’re all wondering!) is for sale for £900,000

Hope you enjoyed this post and if you’d like to explore more of South London I run tours in Waterloo, Bankside and Bermondsey.