Along Whitechapel Road, glance up at the right moment and you’re stopped in your tracks. The serene historic sight of Trinity Green Almshouses transports you back into a London from hundreds of years ago. 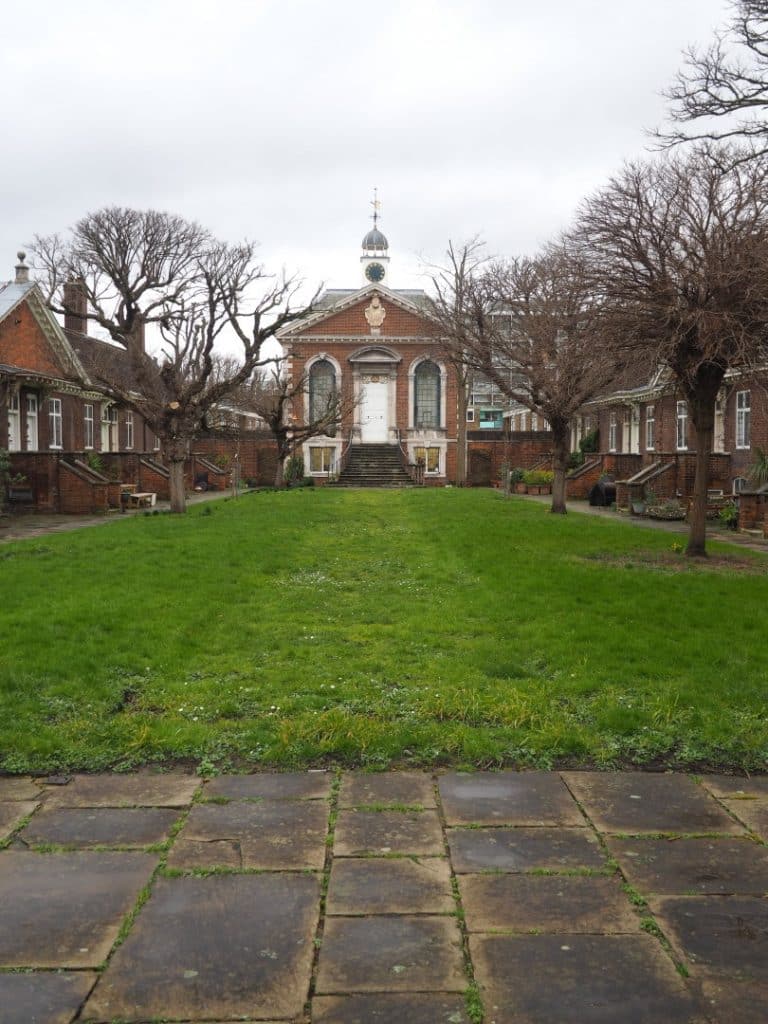 This is a delightful slice of East London in the 17th century.

The almshouses belong to the Corporation of Trinity House, an organisation going back over 500 years.

On 9 March 1513 a group of mariners who were fed up with the lack of regulation on the Thames petitioned the King to set up a fraternity to license pilotage along London’s liquid thoroughfare.

However even before they got their official credentials, Trinity House were a benevolent group that looked after mariners in need along with their widows and dependants.

The charity was based at Deptford and built two sets of almshouses there, today neither survive.

However in 1695, 28 almshouses and a chapel were built to accommodate the growing group and Mile End was chosen as a suitable location. 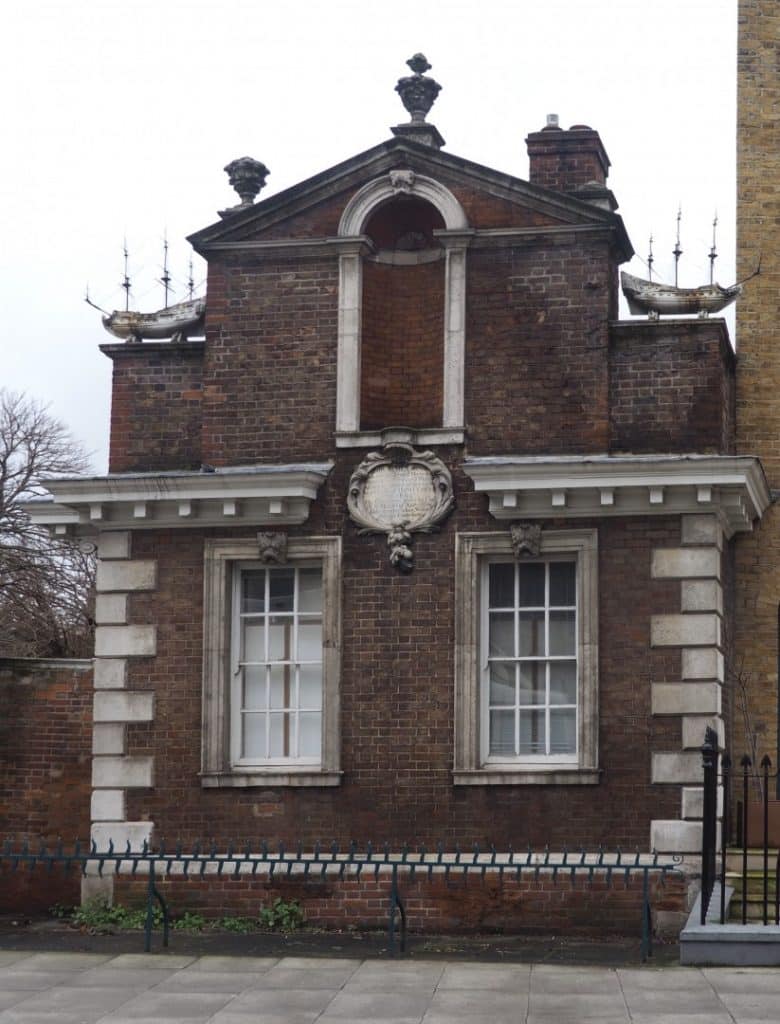 The money for all these new homes came from Captain Henry Mudd of Ratcliffe (1630-1692) who had donated the land to Trinity House in his will. He is mentioned on a lovely little cartouche on the side of the building. 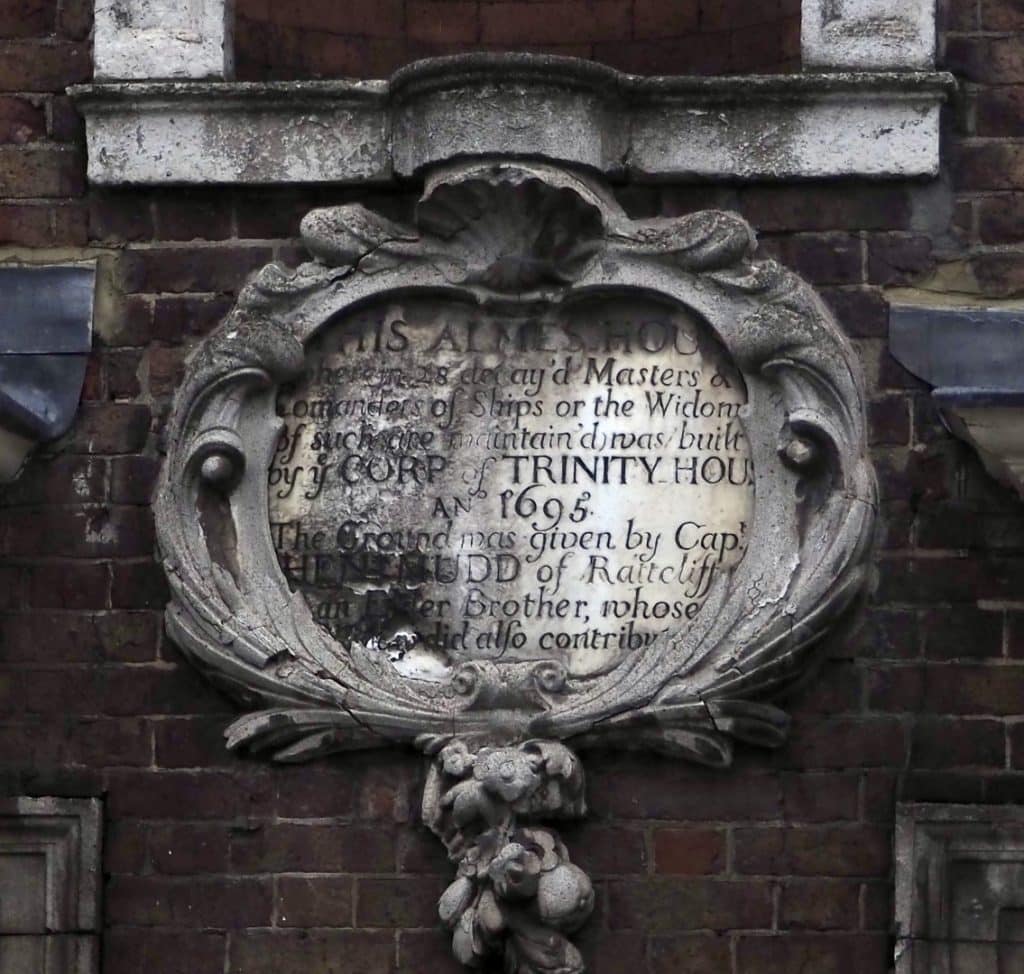 Even without knowing the history, a closer look at these exquisite boats would probably give away the sea-faring connections. 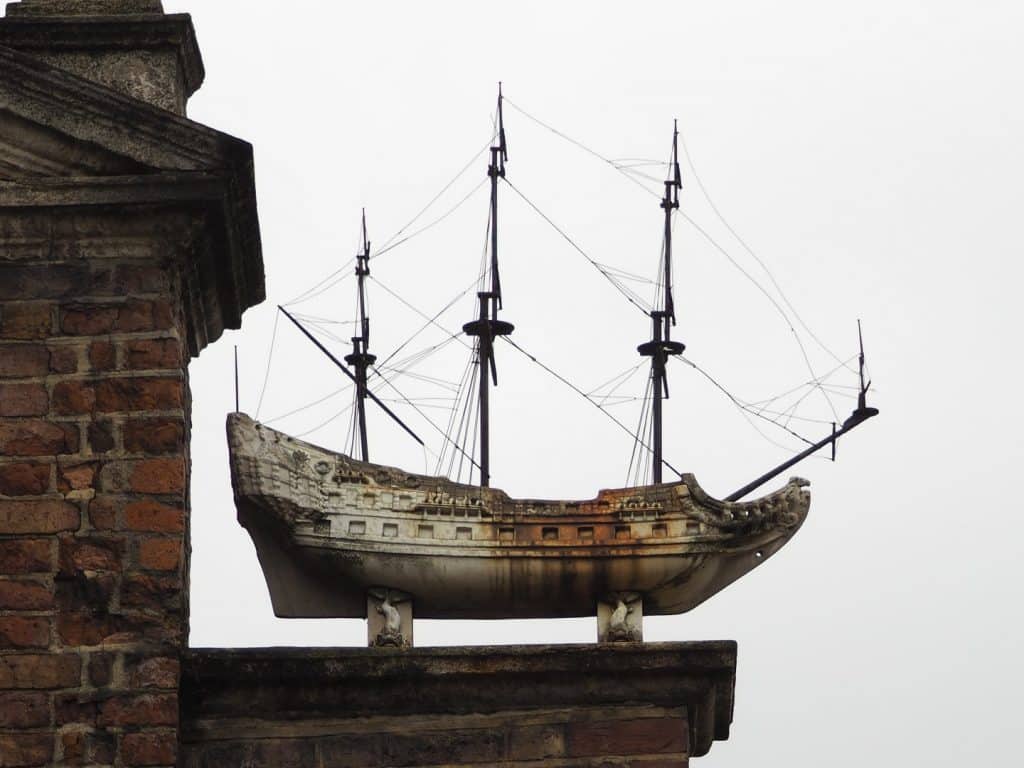 to make the point even clearer, in the 19th Century there was a large mast in the middle of the green! You can see what this looked like from the stock image here.

It’s become part of East End folklore that the design for Trinity Green was by none other than Christopher Wren, Britain’s most famous 17th century architect. 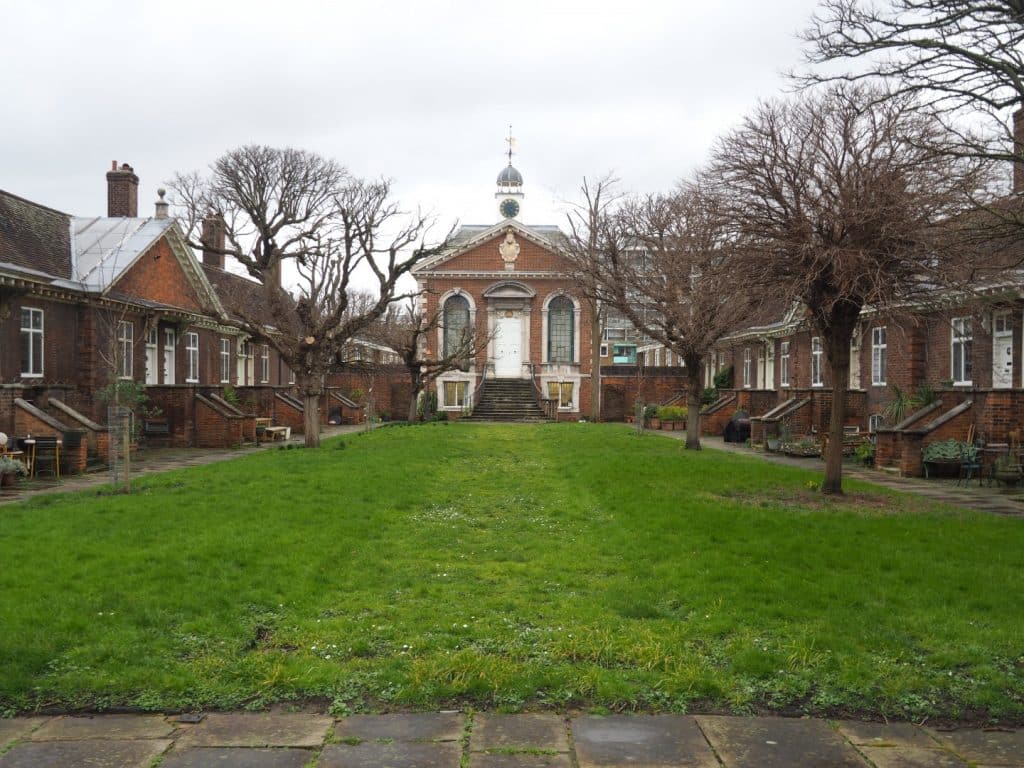 It’s repeated so often that it’s taken as fact, but the issue is there isn’t a shred of proof for the claim! 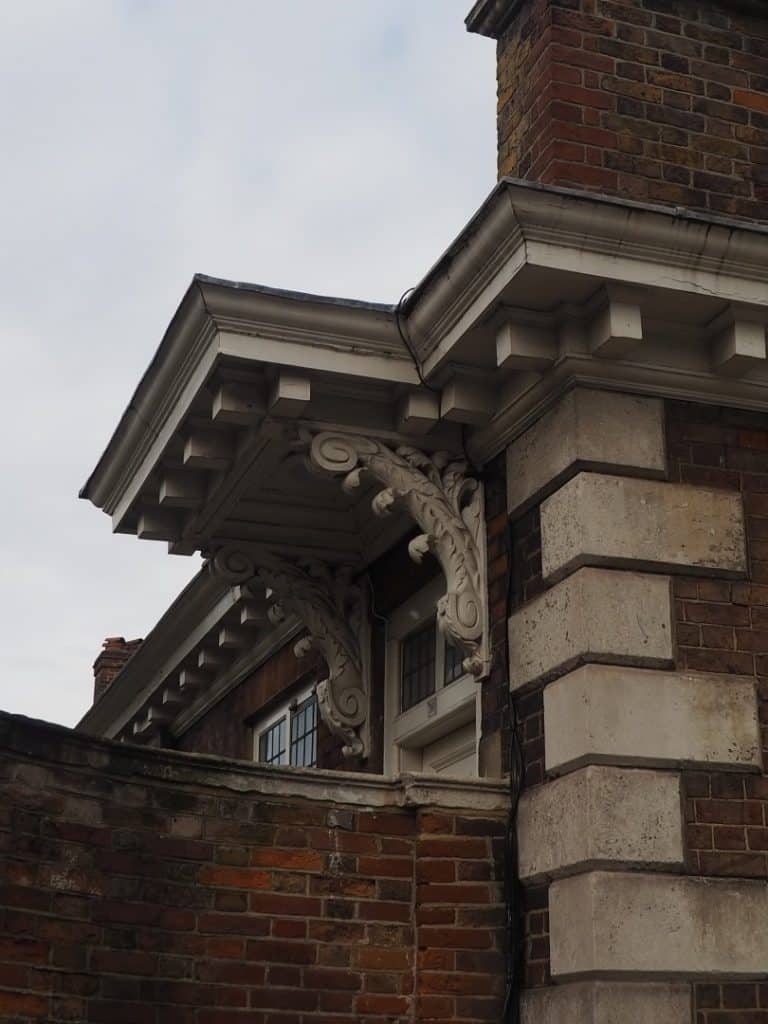 It seems unthinkable that these gorgeous homes could possibly be knocked down, but they’ve come close a few times. 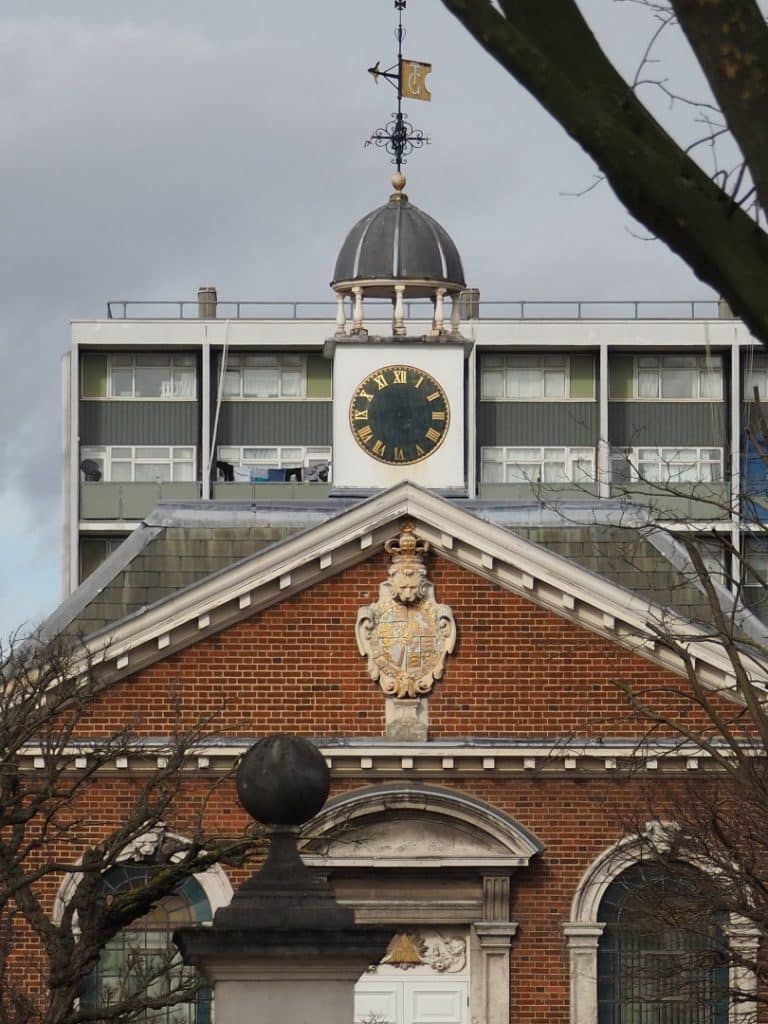 In 1895 they were rescued from destruction by Charles Robert Ashbee, founder of the Guild of Handicrafts in Bow who was a resident at Toynbee Hall by Aldgate East tube station today.

They also narrowly escaped total destruction in the Second World War, in the end just the 8 almhouses behind the chapel were destroyed by bombs.

Protection became official in 1950 was the building received its Grade I listing and later the London County Council restored the remaining almshouses and chapel.

As recently as 2017 it still had a near miss though, with a plan for a 28-storey tower to loom over the historic garden, ruining Trinity Green’s striking visual impact. Thankfully this plan was scrapped.

Luckily we still have Trinity Green Almshouses to admire. Today they’re a mix of private and council homes.