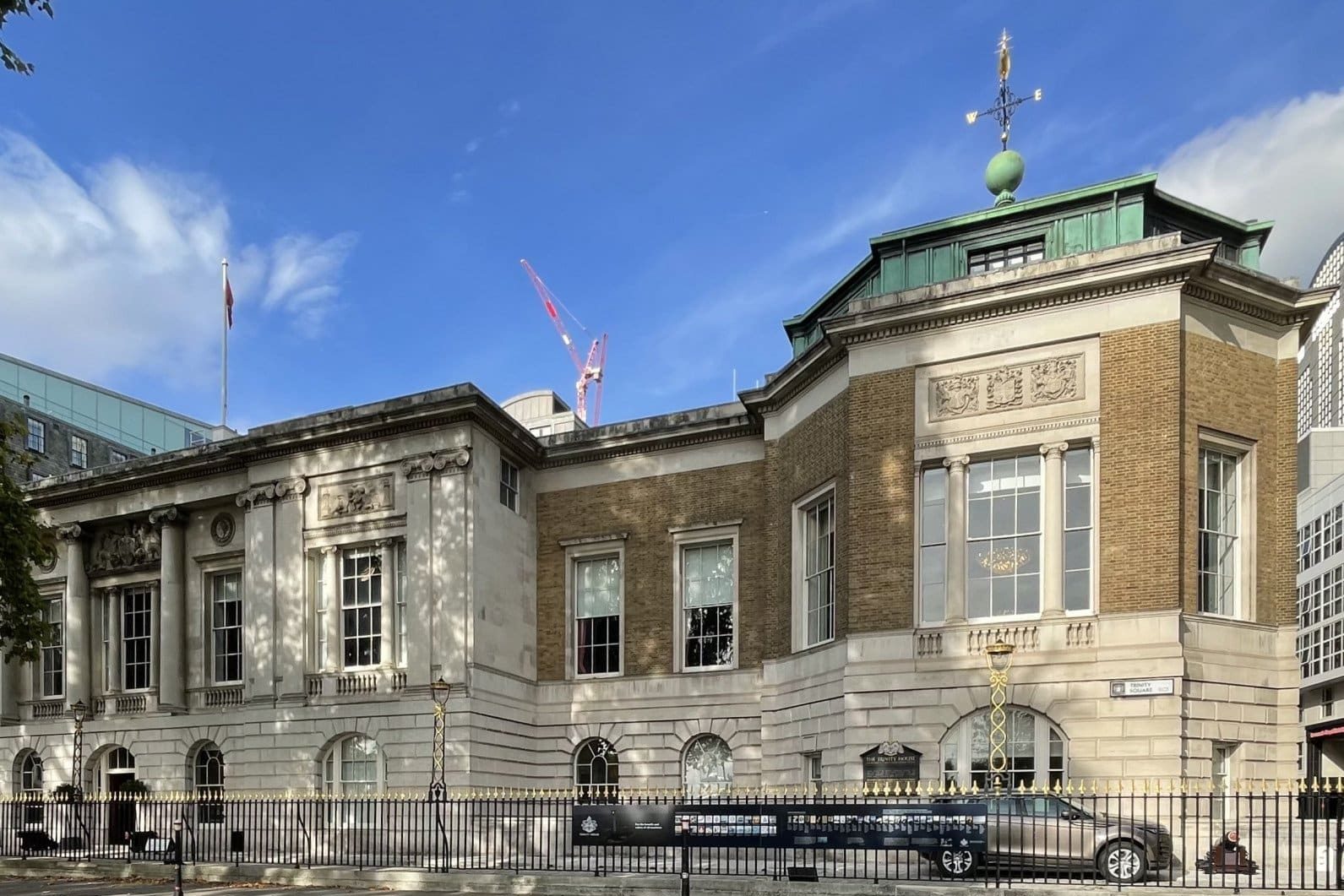 Trinity House | Inside the Corporation with a 500-year History

in architecture, City of London, Hidden Gems, London, Look Up London, Things to do in London
2 Comments

Have you admired this dolls house-esque building on Tower Hill?

This is Trinity House, an institution whose history stretches back to 1514, based here since 1794.

What is Trinity House?

Today Trinity House is a charity and its primary concern is the safety of shipping and mariners. It supports training, welfare and offers support to the seafaring community.

Its history can be trace back to 1513. King Henry VIII had formed two Royal dockyards on the Thames (at Woolwich and Deptford) and the increase of river traffic prompted safety concerns from the Guild of Mariners.

A year later, in 1514, the guild received a Royal Charter. Their full title was The “Guild Fraternity or Brotherhood of the Most Glorious and Undivided Trinity and of Saint Clement in the Parish of Deptford Strond in the County of Kent”. Thankfully “Trinity House” is perfectly acceptable today.

Throughout their history, just like the other City of London Livery Companies, Trinity House built almshouses to provide for retired or injured members. Amazingly, some of their 17th century London almshouses still survive along Mile End Road today! I wrote about them here.

One of the major tasks undertaken today is the upkeep of lighthouses, buoys and light vessels. The Corporation once owned Trinity Buoy Wharf, home to London’s only lighthouse. You can watch my YouTube all about it here.

Like any historic City institution, Trinity House has tackled frequent disasters, mainly in the form of fires.

The Corporation first moved from Deptford to Stepney in 1618, then on to the Square Mile at Water Lane in 1660. It was engulfed in the Great Fire 6 years later and then burned down again in 1715.

Its current Grade I listed headquarters was built by Samuel Wyatt 1794-6. Tragically it was gutted by an incendiary bomb in 1940 but was expertly restored – the original interiors copied from photos taken by Country Life Magazine in 1919 – by Albert E Richardson in the 1950s.

Directly after the front doors you enter the Entrance Hall. Today, as in the past, you can find models of ships, lighthouses and curios on display.

One of the most impressive shows the Prince Royal. First launched in 1610, it was named in honour of Henry Frederick, eldest son of King James I of England who died of Typhoid Fever aged 18. The model was completed in 1952 by Robert Spence.

Models such as this one would be built as advertisements, showing the craftsmen of the shipbuilders and giving an accurate representation of how the finished product would look. The Prince Royal was built by Phineas Pett, part of the celebrated Pett dynasty of shipbuilders based at Deptford.

Those unfamiliar with life at sea might struggle to recognise this curious object.

This is a binnacle, used to house the ships compass and made of wood or certain metals that don’t affect the orientation.

I also loved these model lighthouses set within blue niches. They reminded me of the Moorgate ‘lighthouse’ which you can read more about here.

Ascending the stairs to the corridor – or to give it its official name, the Quarterdeck – you can look up to admire a wonderful trompe l’oeil ceiling. It was through the roof here that the incendiary bomb struck in 1940.

Continuing the impressive interiors, we enter the Court Room.

Decorated with portraits of Royals associated with the Corporation, the room has another impressive ceiling by Glynn Jones from 1953. They were exactly copied from the originals painted by J F Rigaud in the 1790s then restored by William Holman Hunt in 1850.

But the oldest painting in the room is a portrait of Queen Elizabeth I by an unknown artist but completed in the 16th century.

Most of the smaller, priceless, paintings were sent to the nearby Tower of London during The Blitz. However, after a year their damp surroundings there were causing damage and Trinity House brought them back on 28th December, ready to be collected on 30th December to travel to their new temporary home.

It just so happened that 29 December 1940 was the worst night of the Blitz for the City of London.  Known as the second Great Fire of London, 100,000 incendiary bombs fell over the Square Mile.

All the paintings were destroyed but the one of Queen Elizabeth one was purchased by Trinity House in the 1960s.

A devastating stroke of bad timing which means all those priceless paintings were lost. However, there’s still plenty of fascinating things to admire inside…

In the Reading Room is a portrait of Winston Churchill chatting with Franklin D Roosevelt. Churchill was an Elder Brother of Trinity house from 1913 until his death and was apparently once fined 1 shilling for smoking inside Trinity House. Unfortunately the shilling along with his letter of apology has been lost!

The Library, our final room on the tour, has very few books on the face of it, but that’s because they’re hidden behind the panelling.

This large, light-filled oval room is part of a newer extension to the house (from the outside you can see that its upper floors have plain brick to distinguish it.

But a lovely historic details can be found in the remnants of much earlier stained glass, including coat of arms from Masters and Wardens going back to the 1570s.

Much like City Livery companies they also have an impressive collection of silverware including this epic wine cooler, a gift from King William IV in 1831 which celebrated the completion of the new London Bridge.

Just below it is a lovely collection of glassware stood on a large silver tray.

One of my favourite stories from the tour was the fact this whole tray was stolen from an event here a few decades ago, only to be returned after a deathbed confession in 2000!

I hope you’ve enjoyed this whistle stop tour inside Trinity House, it’s a wonderfully historic institution to add to your to-do list!

Trinity House offers public and private tours, run by qualified City of London Guides. I was kindly invited on one by Kate Boyle and it was fascinating. You can find out more by visiting their website.

For more about the City’s historic institutions and the symbols and secrets hiding in plain sight, join my City: Power & Sacrifice walking tour!