8 Unusual London Trees With A Story Behind Them

in London, nature, Things to do in London
2 Comments

Can a city be a forest? I have to admit I often take London’s trees for granted. Usually I’m on the hunt for sculptures and architectural details, but Paul Wood has opened my eyes to the beauty of London’s natural decoration.

According to one UN definition London is a forest. In London there are 8.5 million trees, roughly one for every Londoner and that gives us 20% tree cover, enough to hit that UN definition.

In his book, ‘London is a Forest’, Paul explores the city as an urban forest and I asked him to share 8 of his favourite unusual London trees.

A local landmark and officially, a Great Tree of London, this particularly large and well-shaped example of the familiar conker tree shades the clapboard Second Nature health food store, once a butcher’s shop, on Wood Street, Walthamstow. The Great Trees are a list of 61 special trees nominated and voted on by the public and can be found all over town, not just in Walthamstow!

London’s oldest tree with an age range anywhere between 1000-2000 years old. Rather small and wizened, it’s the Yew near the entrance to the churchyard. Take a close look in order to marvel at the hollow and twisted limbs. Dating old trees is an imprecise science, as they grow older, bits drop off and cavities develop, making ring-counting virtually impossible. Just think, if this tree is 1000 years old, it would have been a sapling during the Norman conquest, and if it’s 2000 years old it was here before the Romans arrived.

A storied tree found in Sayes Court Park, the last surviving scrap of 17th Century diarist John Evelyn’s Deptford garden. A glitzy stone plaque tells us it was planted by Tsar Peter the Great in 1698, but, despite its aged appearance, DNA testing suggests it is rather younger and possibly an unusual hybrid between a white and a black mulberry.

Of the 8.5 million trees in London, 900,000 are street trees, and it is these pavement trees that represent some of the more unusual species encountered in the urban forest. This Catalina Ironwood is one of the most unlikely. Only found on a small Californian offshore island, it’s remarkable that one can also be found on the frontline in Chelsea. A very distinctive evergreen tree with shaggy bark and a rather unkempt silhouette.

Richmond Park is famed for its veteran trees which represent an important habitat for rare insects and fungi who specialise in gradually devouring very old trees. The relatively diminutive Royal Oak is probably the oldest tree in the Park at around 600 years old. What it lacks in stature, it makes up for with a splendid fat, hollow trunk. Find it in its own enclosure between Sidmouth Wood and Queen Elizabeth’s Plantation.

London’s largest ‘Baobab’ Plane. These striking trees are a short, fat form of the familiar London Plane, and this one is the most portly. ‘Baobabs’ are few and far between, but keep popping up in unlikely places – one was recently discovered in the gardens of Buckingham Palace! Find this one near the elm avenue bisecting the lower open grassy area of Ravenscourt Park.

Coldfall Wood is one of London’s precious ancient woodlands, full of characterful old Hornbeams. The most fascinating feature is the ancient woodbank on the wood’s northern edge lined with several wonderful old boundary marking Hornbeams. They have been pollarded over the centuries to maintain a distinctive low stump, but have not been cut for a long time giving rise to the fantastic shapes now seen here, just a short walk from Muswell Hill Broadway. 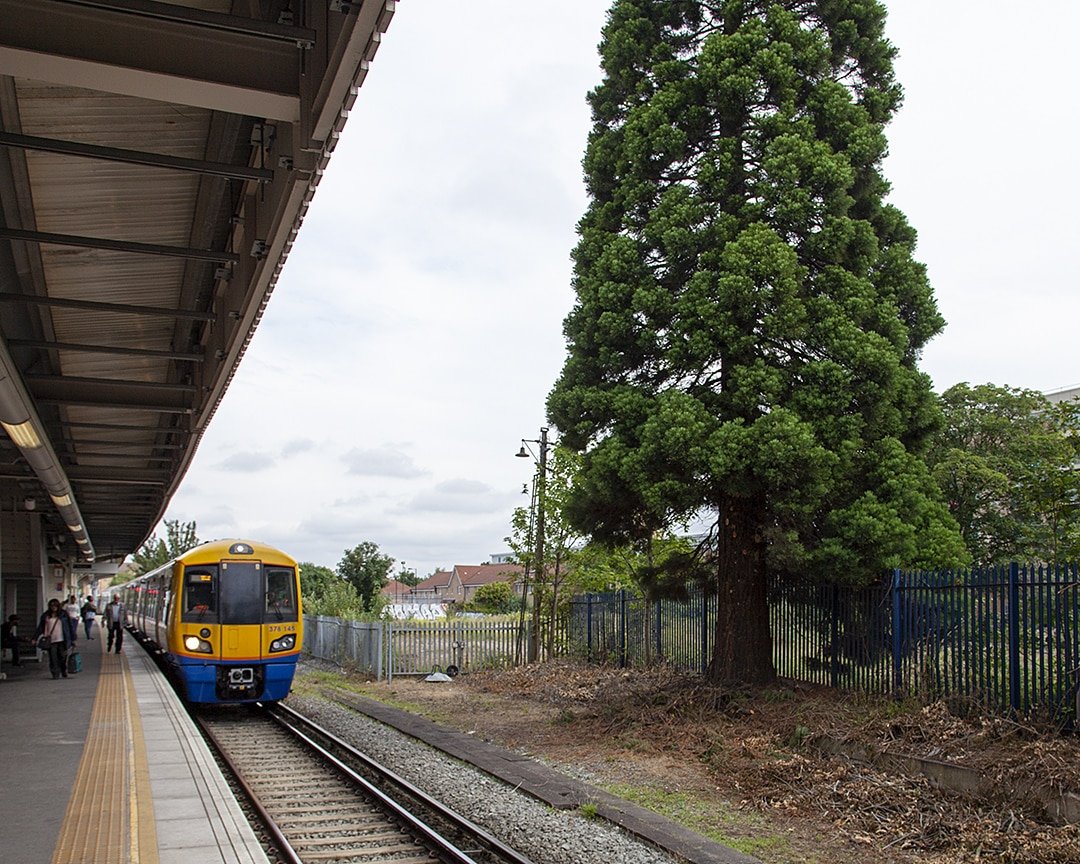 This landmark tree towers over platform 1 of New Cross Gate overground station. Precariously situated, it could do with some protection if the Bakerloo Line extension arrives or the neighbouring derelict plot is built on. How this tree arrived in this unprepossessing spot is something of a mystery, but it must have been here for a while judging by its size.

In Paul’s book he explores the city through a series of forest trails. Along the way he discovers many remarkable trees and dozens of fascinating stories.

‘London is a Forest’ was published by Quadrille in 2019, and is available in all London’s best bookshops as well as online. Signed copies are available directly from Paul, get yours here.