in London, Things to do in London
12 Comments

Westminster Abbey was founded in 960 AD and the current building is the third major one on its site.

It’s the nation’s Royal Church; home to weddings, funerals and the Monarch’s Coronation ceremony which has taken place here since the 11th century. 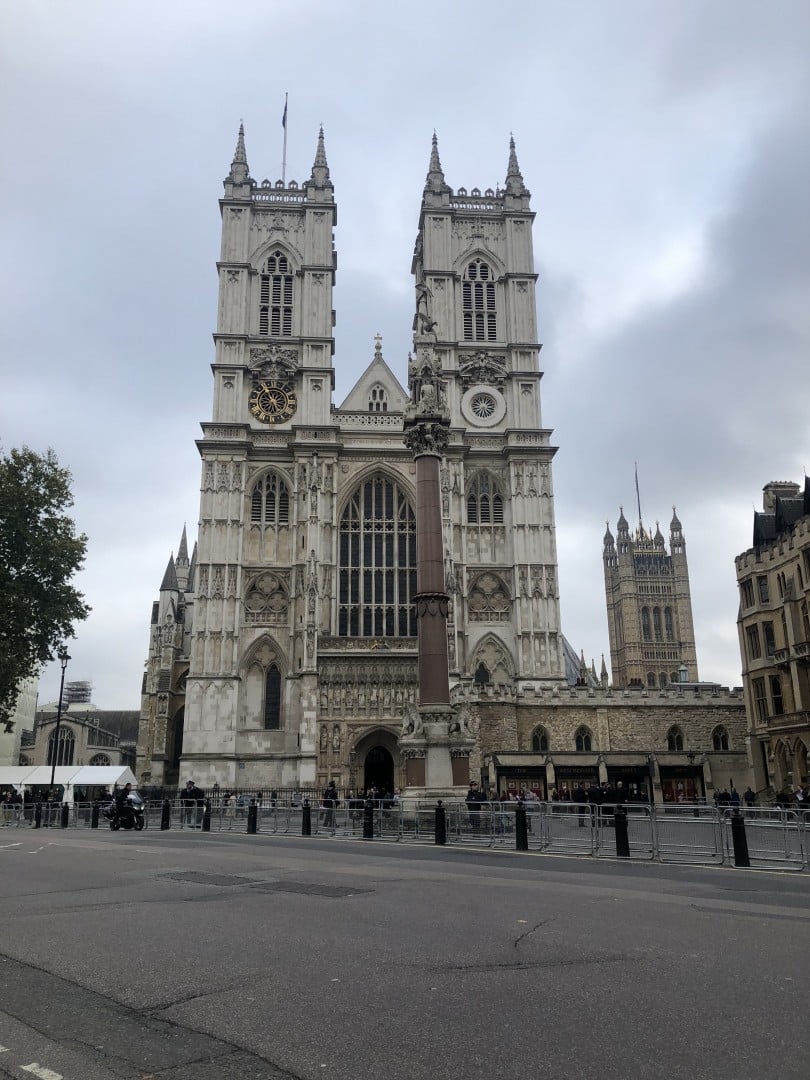 As a Blue Badge Guide I’m lucky enough to lead private guided tours around the Abbey and so I wanted to share some of the quirkier details most people don’t notice!

These are my 11 favourites…

There’s well over 3,000 people buried under Westminster Abbey. But one is unique;

Ben Jonson was a poet, playwright and actor. A contemporary of Shakespeare. Fitting the stereotype of a penniless thespian, Jonson died impoverished in 1637 despite his creative success and as such couldn’t afford a full six foot by two foot burial spot in the Abbey.

There are different versions of how came about, but essentially Jonson apparently said that ‘two feet by two feet will do for all I want’. In a cash-saving plan, he was buried upright! 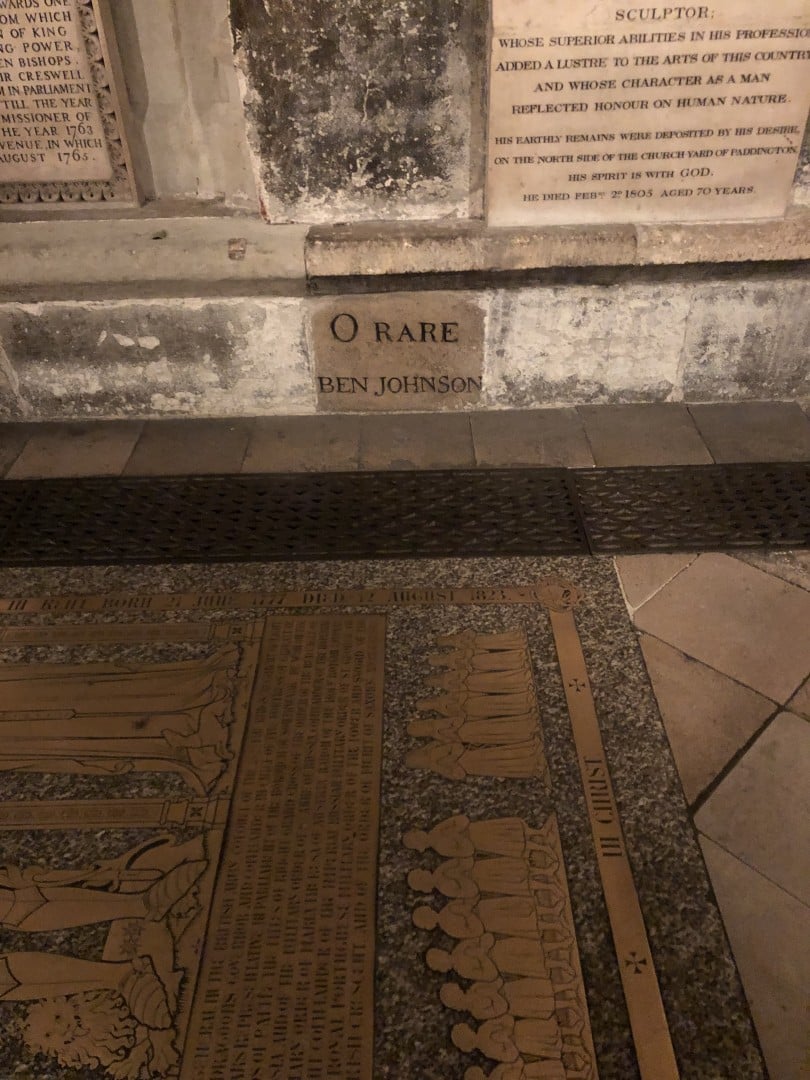 Seems unbelievable right? Well in 1849 while a nearby burial was being dug, sure enough, the clerk of the works spotted two upright leg bones in the sand!

The original plaque has now been moved to the North wall and there’s another – hardly legible – plaque in the North aisle. 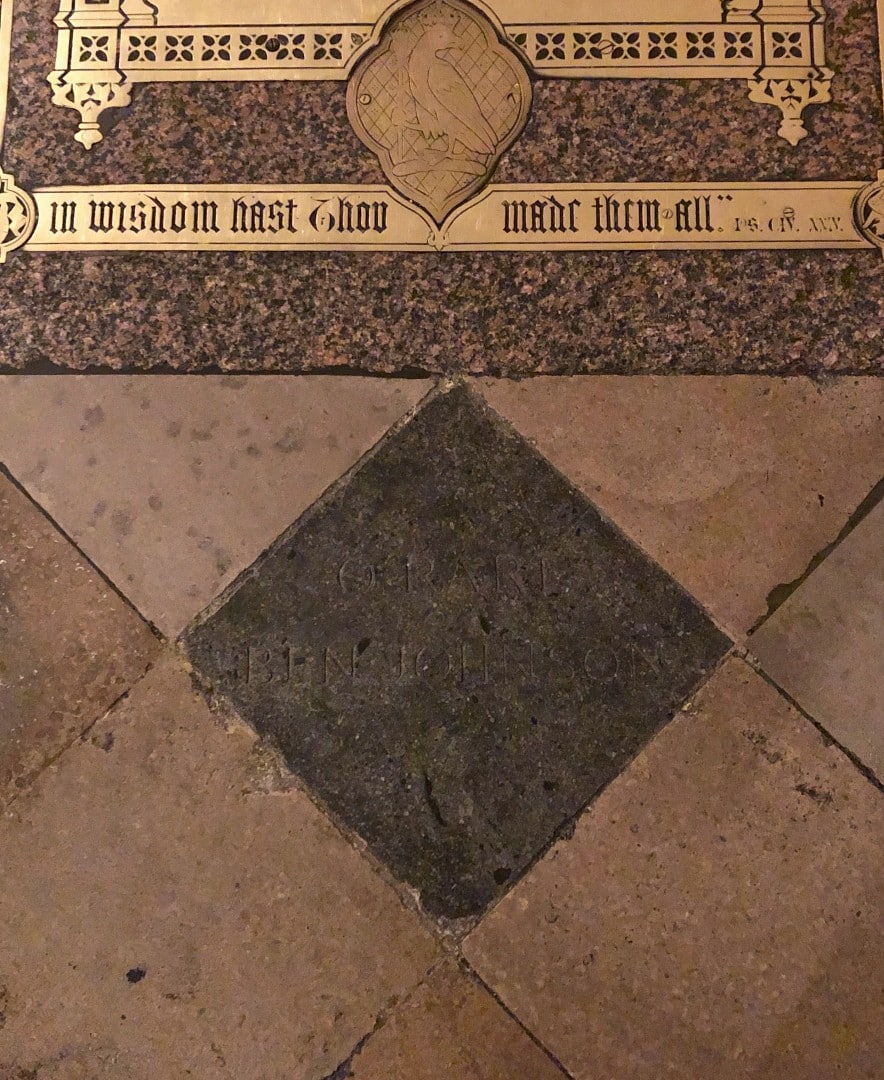 The majority of the Abbey we see today was built under King Henry III in the 1240s. However Henry III went a bit wild with the budget and 1272 when he died, finishing the Abbey was put on hold.

It would take another 100 years until King Richard II took on the project of completing the Abbey’s nave and when it did, something had to be taken out of the budget.

If you look up in the nave you can see the exact point between the old and new Abbey; 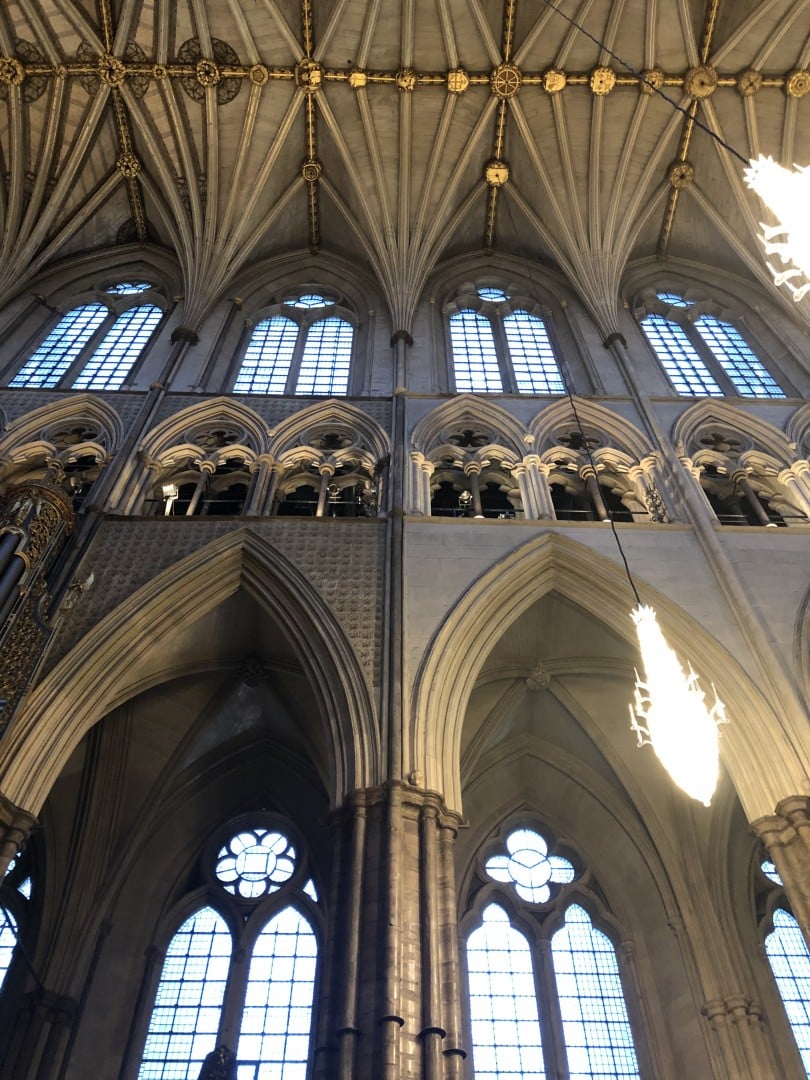 On the left hadn’t side the stone spandrels have a decorated flowery pattern called diapering, while on the right it’s plain. This marks the spot where Henry III’s Abbey ends and Richard II’s begins! 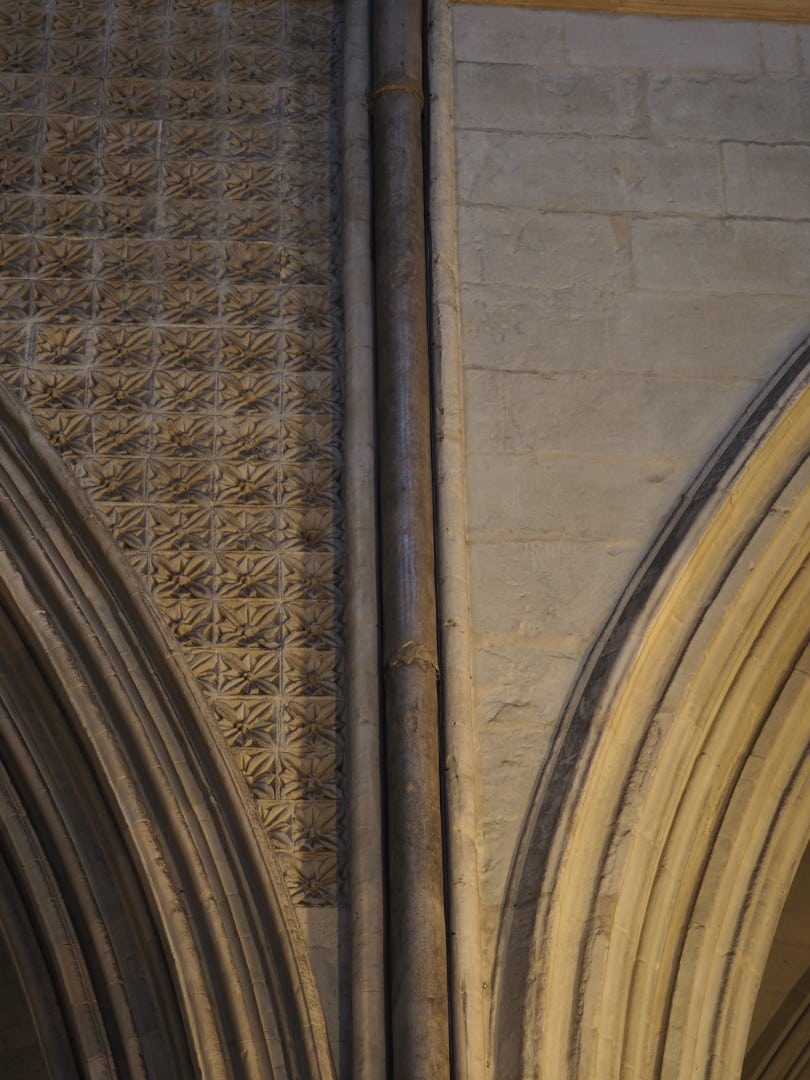 This remarkably morbid monument can be found in St Michael’s chapel. 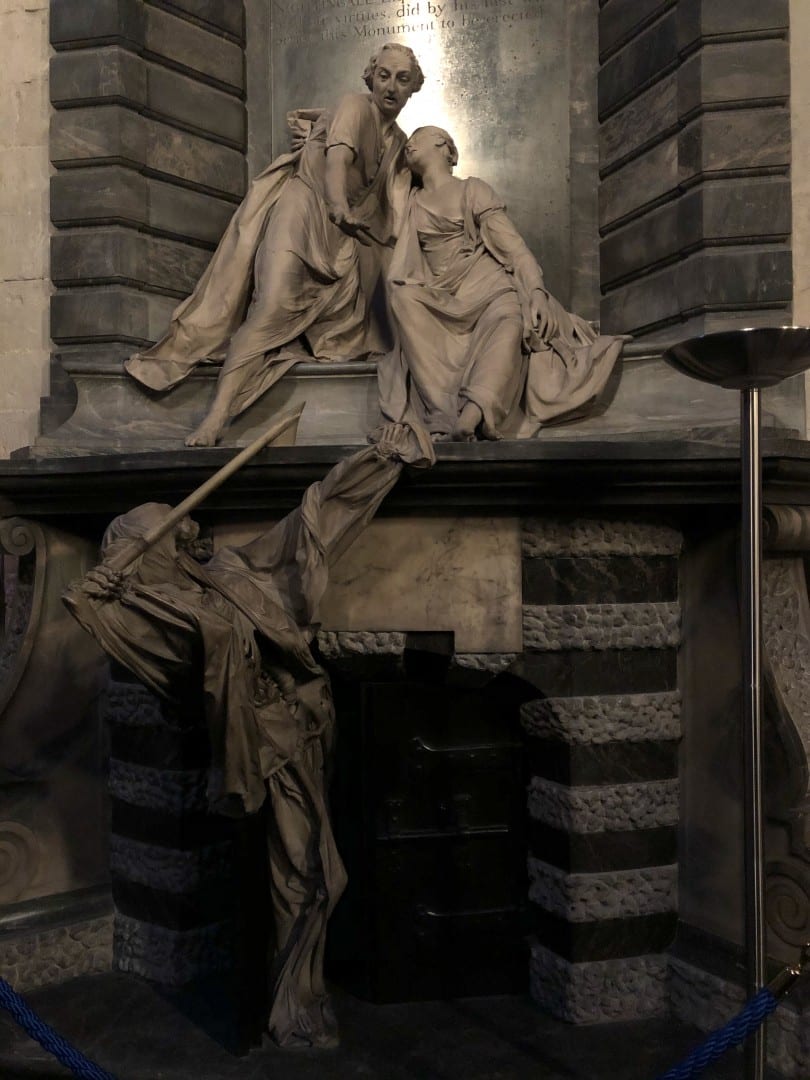 It commemorates Lady Elizabeth Nightingale and was designed by Louis Francois Roubiliac.

It shows Death emerging from below and aiming a spear at the dying Elizabeth as her husband tried in vain to protect her.

It’s thought that the inspiration for the design came from Elizabeth’s brother-in-law who dreamt a skeleton had appeared at his bedside and crept between him and his wife as they lay asleep. 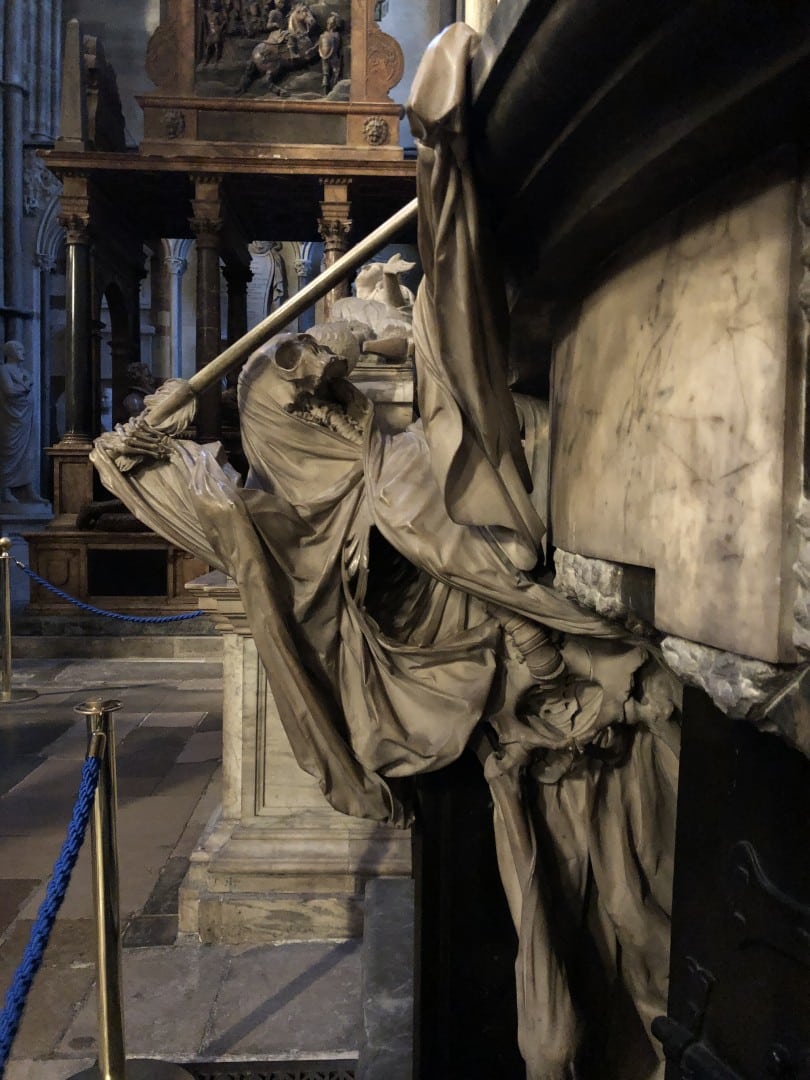 Although Death has now lost his lower jaw, it’s still one of the most powerful and macabre sculptures in Westminster Abbey.

An Abbot of Westminster from 1500-1532, John Islip has a dedicated side chapel. If you look up above its entrance you can see his ‘rebus’ – a pictorial pun on his name. 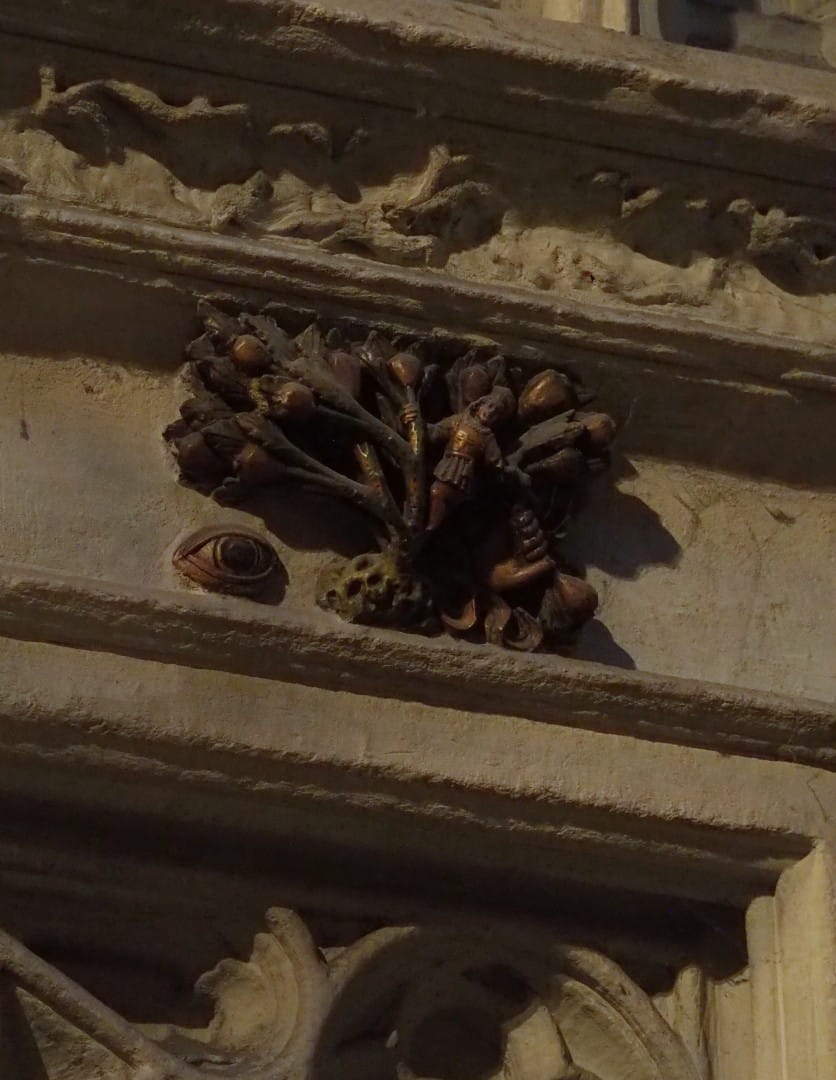 We owe the majority of the current Abbey to King Henry III, but if anything he was too popular for his own good.

His lavish tomb, inlaid with gilded mosaic and coloured glass proved too tempting for pilgrims visiting the Westminster Abbey over centuries. 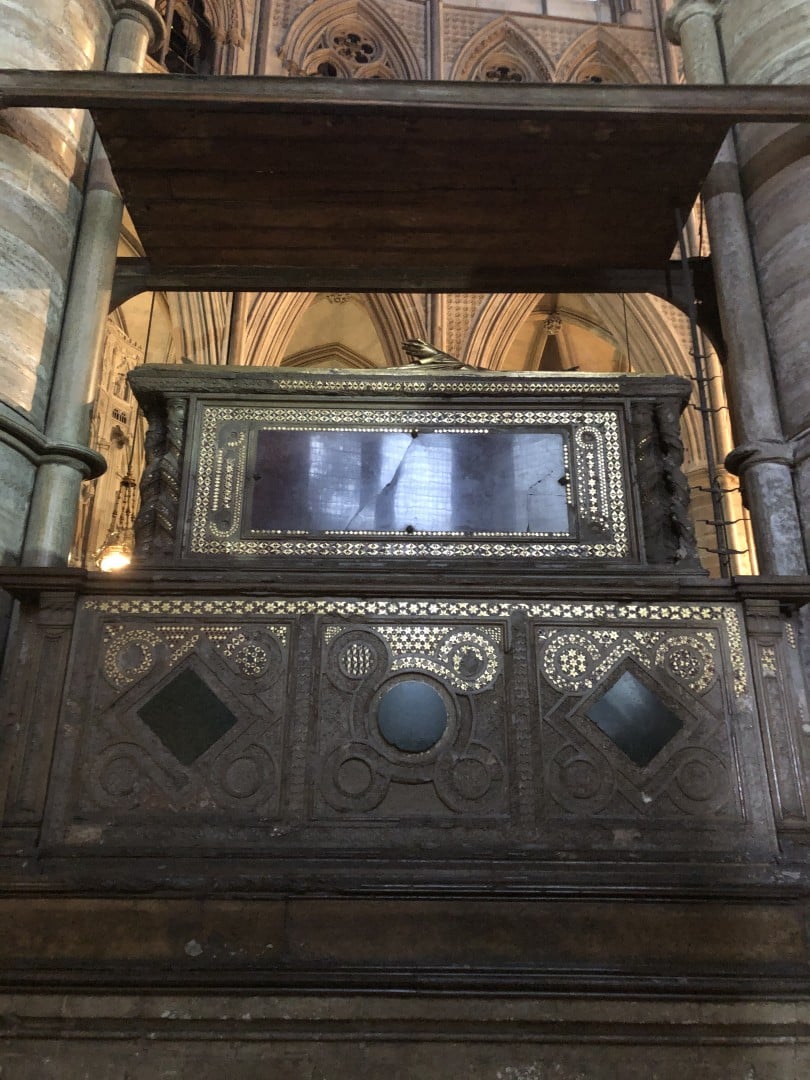 At about outstretched-hand-height you can see where cheeky visitors have picked off little mementos to take home. 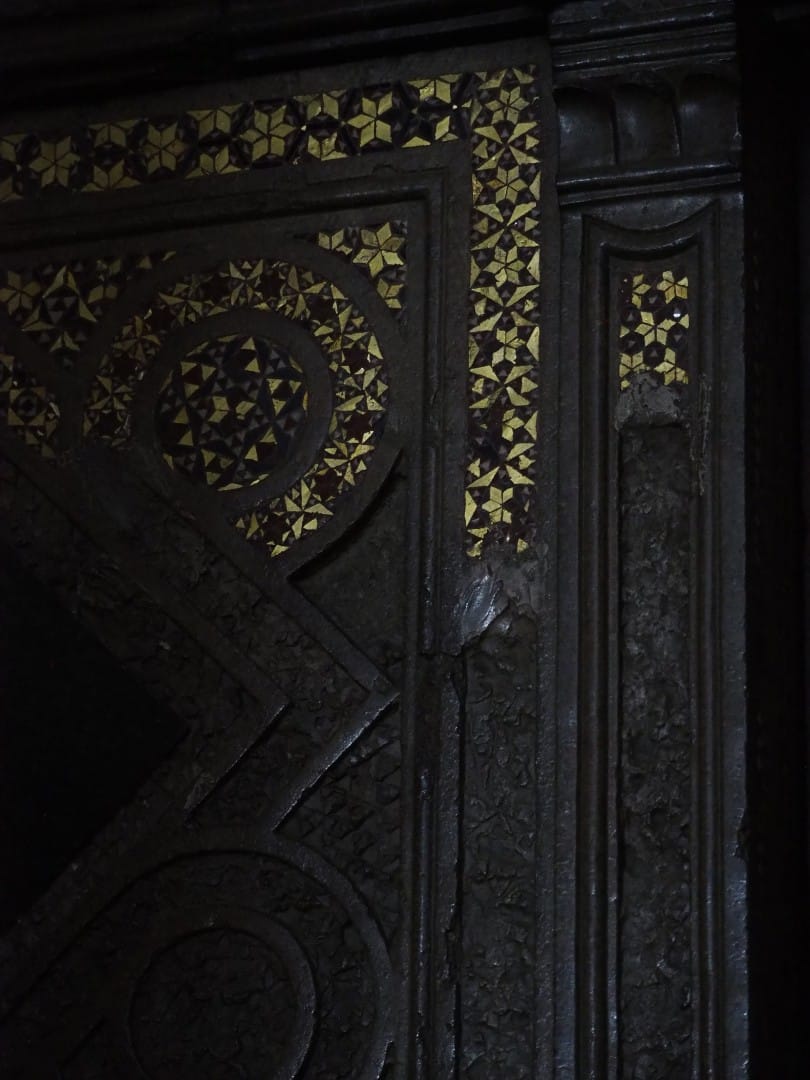 This is the tomb of Francis Sidney, Countess of Sussex. She was a Lady of the Bedchamber to Queen Elizabeth I and founded Sidney Sussex College Cambridge. 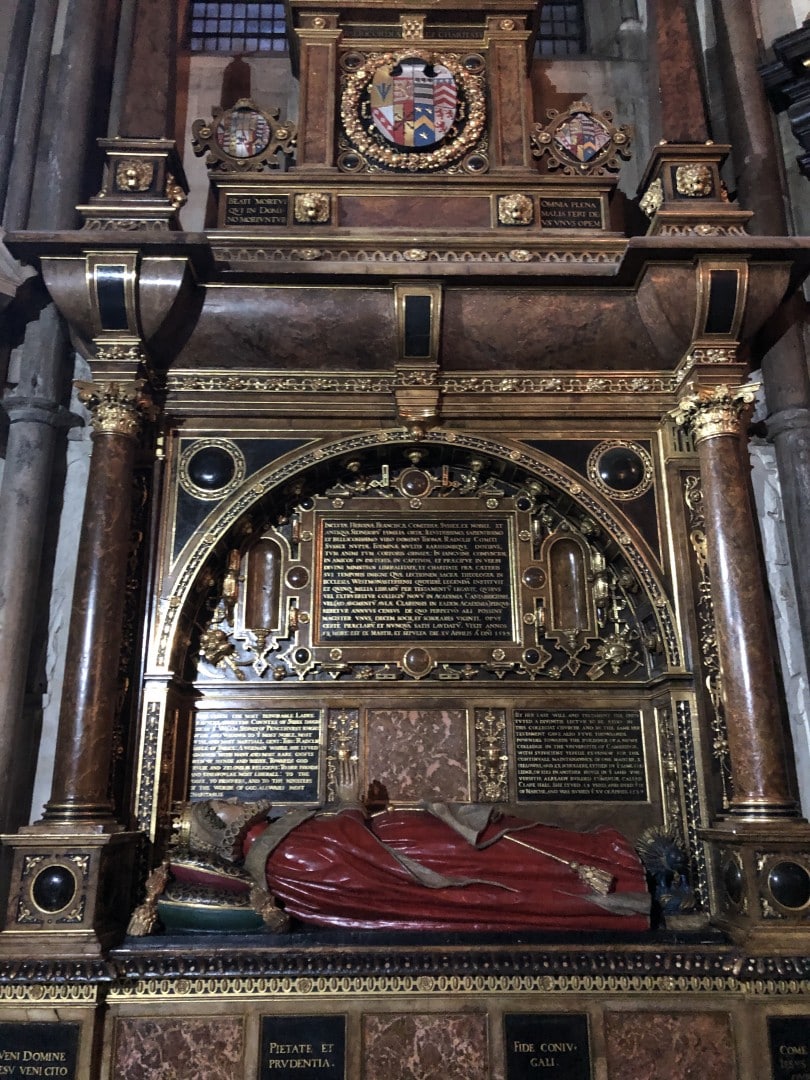 But the curious thing is the little creature at her feet; a blue porcupine. 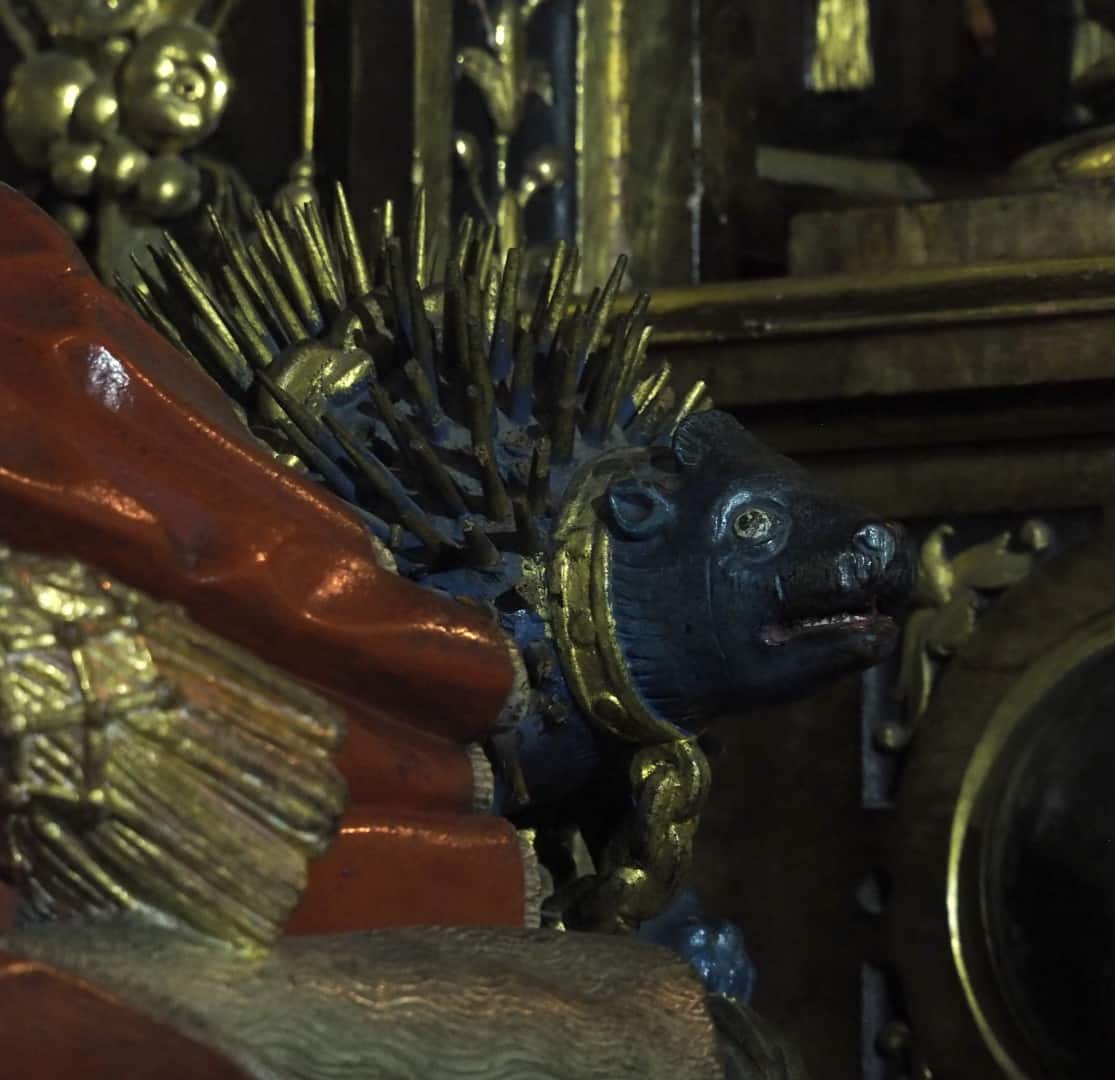 It’s the mascot of the Cambridge college and appears on the Sidney family coat of arms. But why?

The porcupine first appears in the Sidney family under the second William Sidney; a naval Captain and Commander in the British Army, knighted in 1514.

In the early 1500s William travelled to France with King Henry VIII’s sister; Mary, on a mission to marry her off to the French King Louis XII.

The Sidney family believe it was on this trip that William incorporated the French King’s symbol of a porcupine – a small but mighty master of self defence – into the family crest. 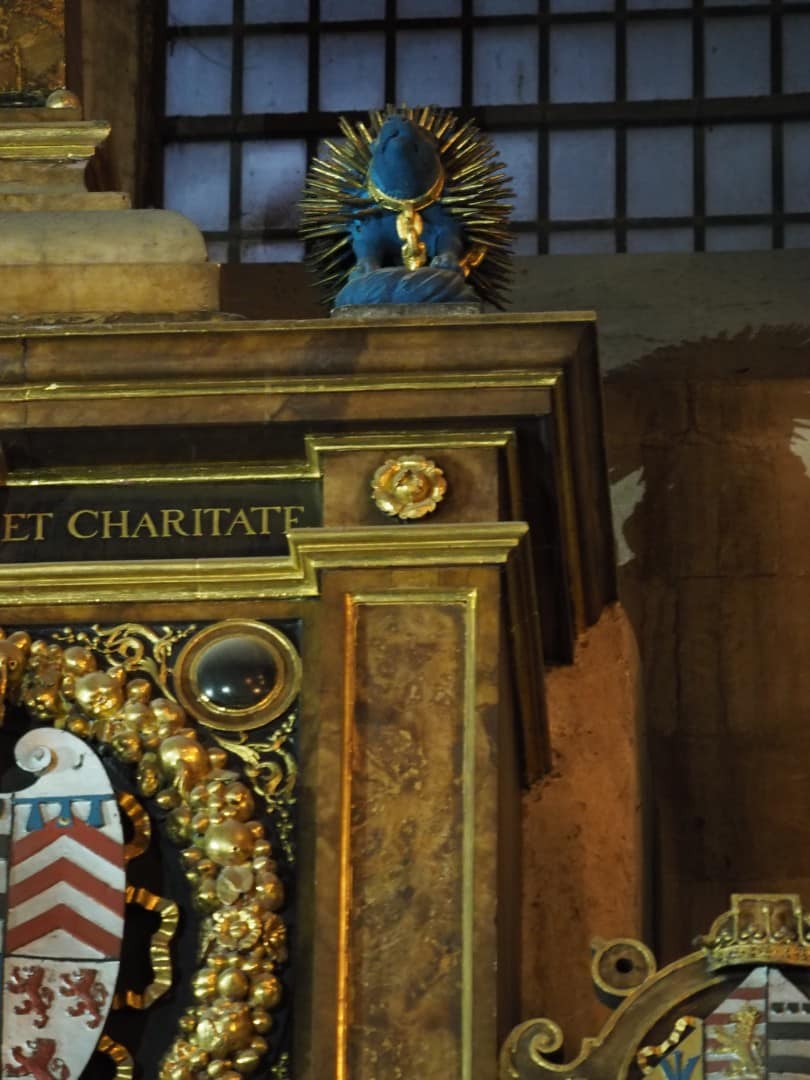 Why blue? No idea, sorry!

You’ve probably seen portraits of Queen Elizabeth I? She never appears much older than 30, complete with a bright white, wrinkle-free face and red lips.

But when the Virgin Queen died at the age of 69, the effigy for her tomb was cast from a death mask. It’s probably the closest you’ll get to looking right into the eyes of a Queen! 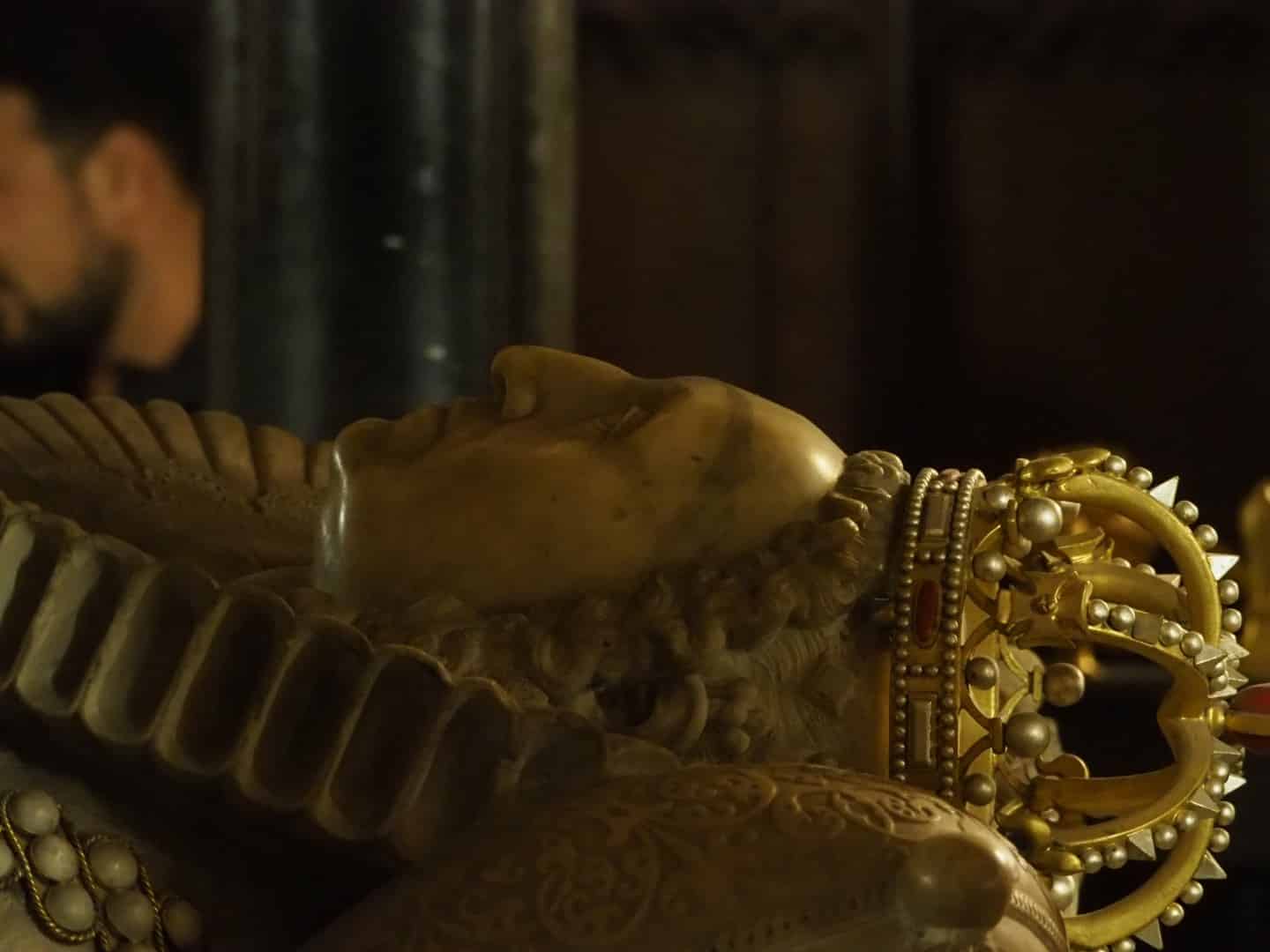 When the stained glass of the Henry VII’s Chapel was blasted out during WWII, Lord Harris of Peckham was a major donor to restore the chapel.

In 2000 he and his wife presented the central stained glass window and you can see their figures in the bottom right hand corner!

Saint sculptures were largely destroyed (thought of as overly Catholic) during the reformation but these 96 statues were saved. Luckily it was through a combination of their prestigious location and the fact they were high up!

Two of the Saints are particularly intriguing…

Amongst the 95 others, this saint doesn’t really stand out. Until of course you realise that it’s meant to be a woman. 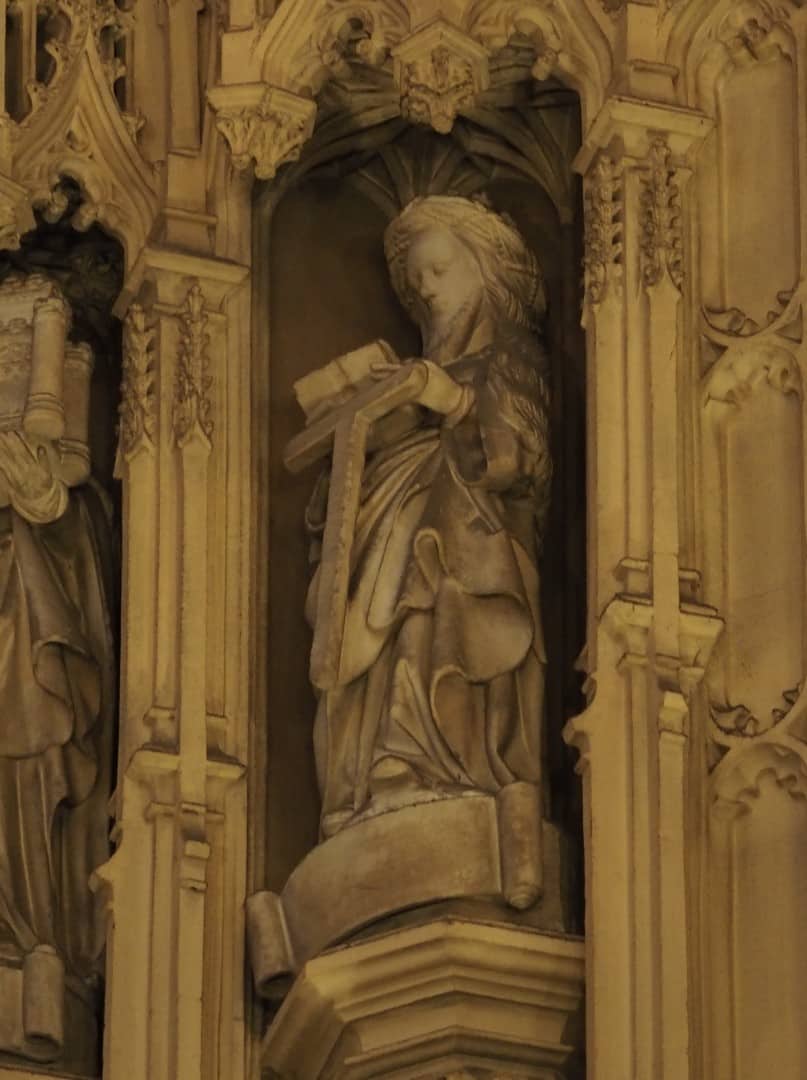 St Wilgefortis never wanted to marry and prayed to God to make her so ugly that her intended husband would call off the marriage. Sure enough, the next morning she was delighted to discover she’d grown a thick bushy beard. She got her wish and the wedding was cancelled!

When I imagine short-sighted ‘ye olde’ folks going about their business, I assumed they struggled along and don’t ever picture them wearing glasses.

Indeed it’s rare to see spectacles depicted in Medieval and Renaissance period, especially in sculpture where they’re quite fiddly to show.

However here’s a learned-looking St Matthew sporting a rather natty pair of pince-nez! 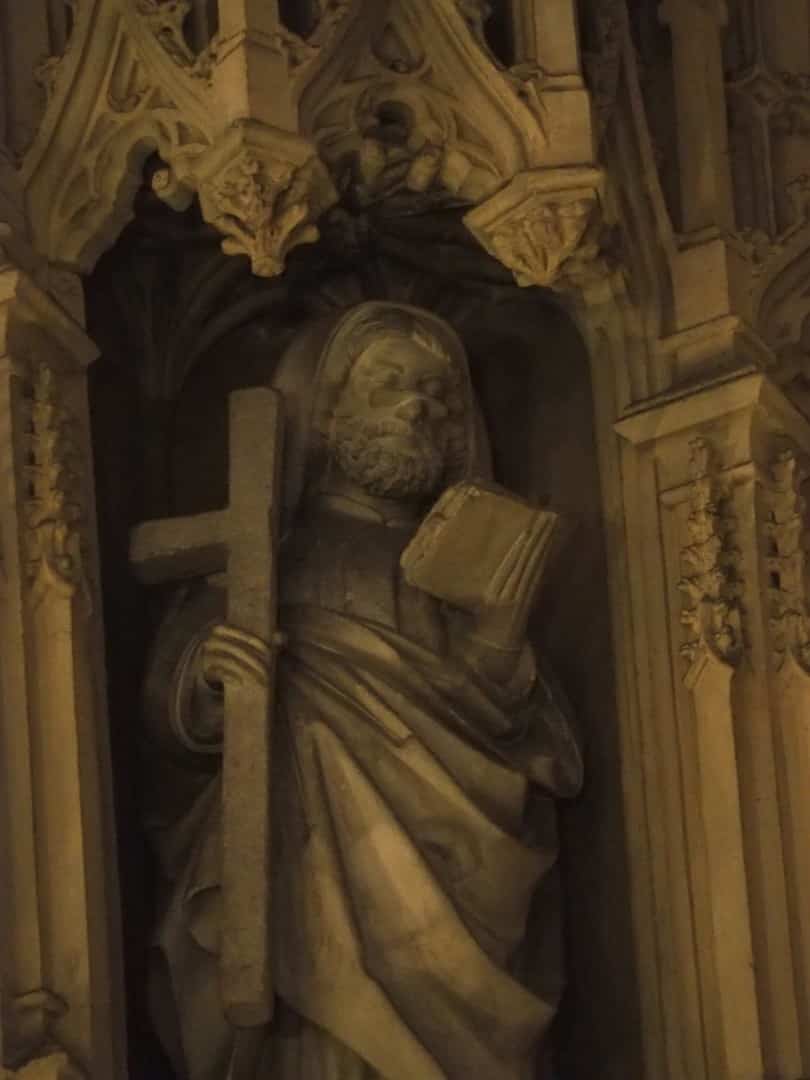 They’re the coat of arms for members of the Order of the Bath, a chivalric order re-founded in 1725 for ex-military or government workers.

If you receive the honour of being admitted into the order, but don’t happen to have your own Coat of Arms. You simply hop on down to the College of Arms and they’ll design one based on your name, where you grew up and even your hobbies.

As an example, the black and red flag (known, strictly speaking, as a ‘colour’) shows a flexing armour-clad arm. Indicating that this colour belongs to “Baron Armstong of Ilminster”. 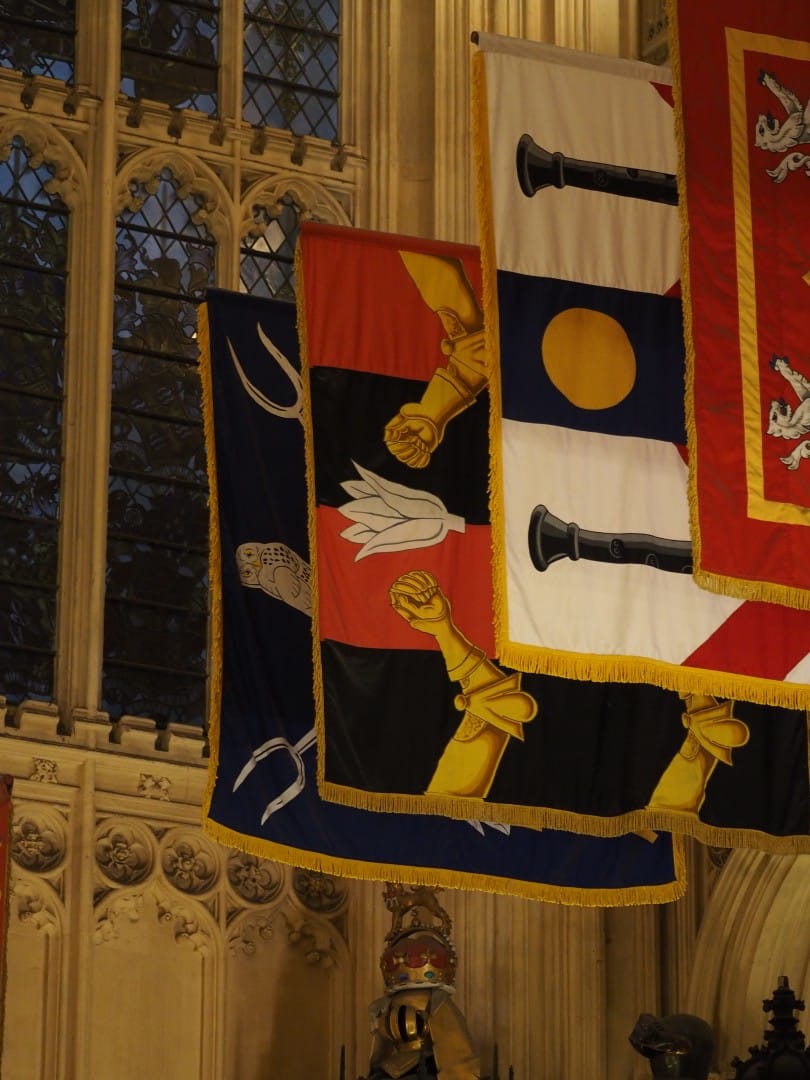 More fun details in the Henry VII Chapel can be found closer to eye-level.

The seats around the edges of the Lady Chapel are known as Misericords from the Latin meaning ‘mercy’ or ‘pity’.

Because the seats flip down while being used by monks during long services, carpenters could have a bit of fun with the decoration. After all it was usually out of sight.

Today the secular – and often cheeky – carvings are on full view, including my favourite of a woman about to smack the bare bottom of a man with some reeds. Was it inspired by real life events? We’ll never know…

Blue Badge Guides have the privilege of being to lead private guided tours of the wonderful Westminster Abbey. If you’re interested in visiting the abbey, please email katie@lookup.london

Westminster Abbey is free to visit for worship but otherwise you can buy tickets online in advance. For the latest information on visiting, head to their website here.