What Makes ‘Dicks’ so Dirty?

Usually getting a giggle from passersby, Dirty Dicks on Bishopsgate dates back to 1745 when it opened as ‘The Old Jerusalem’ pub.

But the name today comes from a local resident that has to be one of the most eccentric historic Londoners.

Nathaniel Bentley (or some say Richard Bentley) was a local dandy and businessman who owned a hardware shop in Leadenhall Street around the 1750s.

He was hit by tragedy when his bride-to-be died on their wedding day and the resulting legend goes that from that day on, he resolved never to wash;

“It’s of no use, if I wash my hands today, they will be dirty again tomorrow”

Nathaniel (or Richard) festered in his own filth until 1809, sitting amongst the table laid out for his wedding feast and only changing his clothes when they rotted off him.

It became something of a tourist attraction and the canny local pub changed their name to Dirty Dicks in 1814, when they adopted some of the paraphernalia.

These dead, mummified cats used to hang behind the popular ‘Dustbin Bar’ at Dirty Dicks. 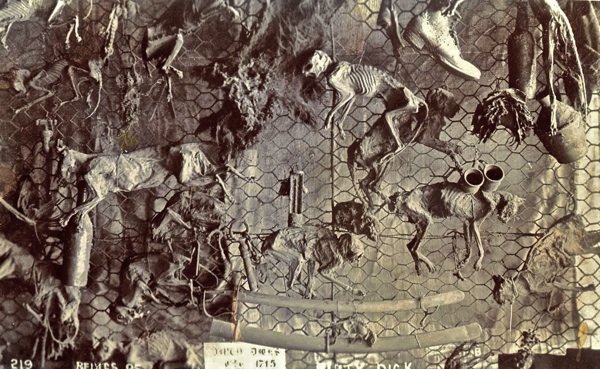 Before you vow to never visit, the pub was rebuilt in the 1870s. However, there are still some artefacts in a glass case – near the toilets, naturally.

To discover more bizarre stories and colourful characters of this area, you can join my Spirit of Spitalfields walking tour. Find out more here.