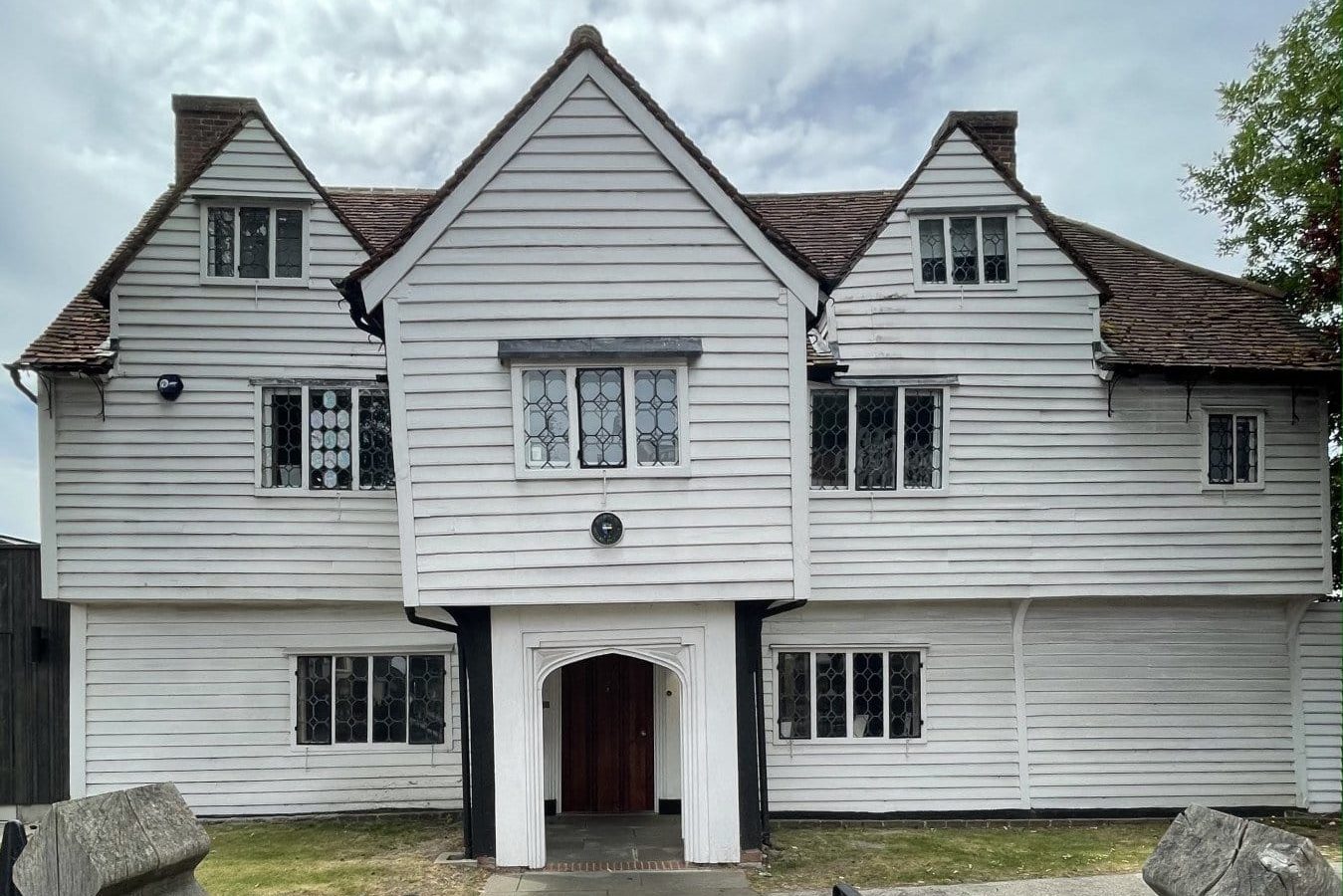 In Sutton you can find an amazing historic gem, a surviving house – built c.1500 – that’s now a brilliant local history museum. Here’s why you should visit Whitehall Historic House…

Under an hour from Waterloo Station, Whitehall Historic sits in Cheam, a village dating back to Saxon times. The earliest surviving records date from 1018, when it was bought by the Archbishop of Canterbury, but it also gets a mention in the Domesday Book of 1086. At that time it comprised of 42 homes and was surrounded by fields, meadows and woodlands.

In 1259 it won the right to host a weekly market (that still takes place today!) but it was really put on the map with the building of Nonsuch Palace under King Henry VIII. More on that shortly.

Today it’s part of the London Borough of Sutton (although it doesn’t have a London post code. You can argue about whether or not it’s truly ‘London’ in the comments!)

Granted Grade II listed status back in 1953, Whitehall is one of very few homes in Greater London which date back to the 1500s.

As you can imagine it’s undergone a fair few changes over its history, with extensions and renovations in the 17th and 18th centuries.

It’s not totally clear why it was built. The most probable reason is a farmhouse or some other storage place but the fireplaces are original and recent refurbishment has revealed other authentic features like the timber beams.

From around 1650 it was used as a home and this continued right up until the last resident moved out 200 years later. More on them below.

In 1963 Whitehall was bought by the Borough of Sutton and Cheam and then opened to the public in 1978.

As well as the story of the house itself, today Whitehall Historic House is a local history museum, telling the story of Cheam Village, its notable residents, local industries and how it’s changed through time.

A lovely temporary exhibition features historic local images. Below is my photo of Park Lane (beside Whitehall Historic House) as it looks today alongside how it looked in the 19th century.

As mentioned above, Cheam was thrust into the Tudor spotlight when King Henry VIII chose Cuddington, a nearby village, as a suitable site for some Royal hunting grounds and a new palace.

In 1538 the whole village of Cuddington, including its church, manor house and surrounding houses were demolished to make way for the King’s new project.

Inside Whitehall History House is a wonderful model which gives a good indication of the extravagance of this palace which cost around £24,000 (approximately £10 million) today!

Today only this pillar, with an illustration of the ground plan, survives on the site of the palace.

In 1682-3, having passed through the ownership of Queen Mary I and Queen Elizabeth I amongst others, Charles II’s mistress Barbara, Countess of Castlemaine had Nonsuch pulled down to pay off her gambling debts.

The only illustrations of the interior of Nonsuch Palace are thought to be on a tomb inside the Lumley Chapel.

The Lumley Chapel is an absolute gem and can be found just across the road from Whitehall Historic House. It’s well worth visiting this beautiful little chapel. Now it’s a separate building within the churchyard of St Dunstan’s Church, but it was once part of an earlier church here in the 1590s.

This tomb that shows Nonsuch’s interiors is that of Jane Lumley, eldest daughter of Henry FitzAlan and 19th Earl of Arundel who bought Nonsuch from Queen Mary I in 1556.

Jane was an accomplished scholar, translating Euripides’s Iphigeneia at Aulis into English, the first known translation of a classical play in English and the first dramatic work published by a woman in English. She was also the firs cousin of that most unfortunate Queen; Lady Jane Grey.

So what are the characters that lived in Whitehall Historic House?

James was born in 1622 in the City of London, son of a Dutch Huguenot businessmen. After his schooling he went on a Grand Tour or Europe and followed his father into a career in finance. However things took a turn when he was imprisoned in the Netherlands, we’re not sure why.

In 1679 James and his wife; Margaret moved into Whitehall and they seemed to enjoy the company of other eminent 17th century figures; John Evelyn and Samuel Pepys. Pepys even mentions Boevey in his diary, on 20th March 1668 he mentions a ‘Bovy’ “who who hath travelled very much” and Pepys enjoyed his tales from the Alps!

The attic space in Whitehall Historic House which recreates the life of James Boevey with items from the handling collection and facsimiles.

Probably the best-recorded residents of Whitehall are the Killicks who had lived in Cheam since 1741. John Killick was the first to obtain a lease on Whitehall but the most famous family member was James, born at Whitehall in 1816.

James was a sea captain, travelling between London and China to make money in the lucrative tea trade. He came to fame when Captain of the Challenger which took its maiden voyage in 1852. With tea clippers (the most famous example being the Cutty Sark) speed was of the essence, given that the first boat back to England able to charge a premium for their cargo. With Killick at the helm Challenger arrived back to London two days ahead of a larger, American ship and a year later it again bested another American ship to the delight of the Brits!

The attic space in Whitehall Historic House which recreates the life of James Killick with items from the handling collection and facsimiles.

The Killicks were to become the last owners of Whitehall House, specifically two sisters; Harriett Maud Miller and Susan Mary Muller. Harriet (known as Miss Maud) was one of Cheam’s best known ‘colourful characters’ as described in a local newspaper. She and her sister led a busy social life at the house, hosting tennis parties and taking part in church productions. Miss Maud, the ‘noted eccentric’ hated modernity and when she died aged 87 in 1959 the house was still lit by gas and candlelight. But visiting today one can just imagine how atmospheric that would’ve been!

Whitehall Historic House is free to visit but only open on select days (Thursday – Saturday, 10am-5pm). You can find the latest information on their website here and pre-book for an upcoming open day here.