in Churches and Graveyards, London, Look Up London, North London, Things to do in London
10 Comments

Until recently, I don’t think I’d actually ever heard of Willesden Jewish Cemetery. However, after a visit last week I can highly recommend popping it on your to-do list.

If you have previously explored any of the ‘Magnificent Seven’ cemeteries, like Highgate, Nunhead and Tower Hamlets, then you will want to pay Willesden a visit!

The original Victorian entrance to the Cemetery

Willesden Jewish Cemetery opened in 1873, surrounded by a wall and the area was mainly countryside. It wasn’t until the Metropolitan Railway Station opened in 1879, that the population started to climb.

Today, with just under 30,000 burials, it’s the most prestigious Jewish cemetery in Britain and run by the United Synagogue – today, Europe’s largest synagogue body.

Still an active cemetery today, you don’t have to walk through the grounds for long before you spot a recognisable name.

My guide during the tour joked that you could find most of the 1970s British High Street in this part of the cemetery and though I laughed, she certainly wasn’t wrong!

Jack Cohen (1898-1979) founded Tesco Supermarket. Cohen was born in Whitechapel and started his career as a tailor, volunteering in the Royal Flying Corps during the First World War and then later started what would become a global chain in 1924 after working on market stalls in Hackney.

The name was formed by combing his business partner’s name; T.E. Stockwell and the first two letters of Cohen.

This striking white structure is the final resting place of another famous high street brand.

The Samuel family ran a successful clock and watch making business, but mass-market success came with Harriet Samuel (1836-1908), who took over her father-in-law’s business on the mail order side and opened the first H. Samuel jewellery shop in Preston, 1890.

Other notable burials you can find here include artists Simeon Solomon and Mark Gertler, Nathan Adler – the Chief Rabbi for the British Empire and founder of the United Synagogue – as well as members of the Rothschild family and 33 Commonwealth Service War Graves from WWI and 77 from WWII.

Having only visited one London Jewish Cemetery before, at first I was surprised to see common symbols from Christian burial grounds; broken columns for a life ‘cut short’ or  an urn partially covered, symbolising the veil between life and death.

But remembering that this was largely built for the newly arriving German and Dutch origin Jews into Victorian London, the cemetery wonderfully presents the dual identities of people who were proud to be both Jewish and British.

An indication of this can be seen on the burial site for Lewis Emanuel (d.1898) whose unusual grave marker has been recently restored and reads; ‘A good Jew and a good Englishman’.

Of course, as an Orthodox Cemetery, it is still very much guided by traditional practices and one noticeably difference is that fact it does not feel as ‘wild’ as London’s other Victorian cemeteries.

There’s only one tree-lined avenue, so members of the priestly tribe may keep their distance from the dead. The fact that branches from a tree by a grave might overhang onto a path where you walk means that traditionally tree branches were cut back.

Another visible tradition is the leaving of pebbles – more permanent than flowers – on a grave as a sign of respect and that the living have not forgotten them.

You can see from above that many people have been moved to leave a stone on the grave of Rosalind Franklin (1920-1958) the Chemist and Co-Discoverer of DNA’s structure who died tragically young.

It’s very unusual to have any human imagery within a Jewish Cemetery. However one exception to this is the pair of hands that can be found on many tombstones.

They represent that the deceased is a member of the priestly family who can trace their paternal link back to the first High Priest of Israel. You may also recognise it as the Vulcan salute from Star Trek, based on the gesture the priest makes when blessing the congregation.

But you can also find images of hands women’s tombs too, often paired with a candelabra to suggest the role of the Matriarch lighting candles at home for the Sabbath.

A tomb that is currently being restored is one of three listed tombs in the cemetery. It’s the grave of Max Eberstadt, a member of a German Jewish family and son of possibly the first German-Jewish Mayor.

It was designed by Edward Burne-Jones, the Victorian Artist who played a role in the Pre-Raphaelite and Arts and Crafts movements. The stylised branch motif represents a life cut short, Max died aged 47.

One really poignant recent addition to the cemetery soundscape installed in the mortuary.

While standing in the original Victorian building, with its authentic tile-clad surroundings, you can learn about the Tahara, the ritual of preparing the deceased for burial. This is traditional done by male or female volunteers and the soundscape was recorded with women who had previously worked in this very spot.

As a society we tend to do our best to ignore death but to learn about the traditions in such a sensitive way was really quite humbling. 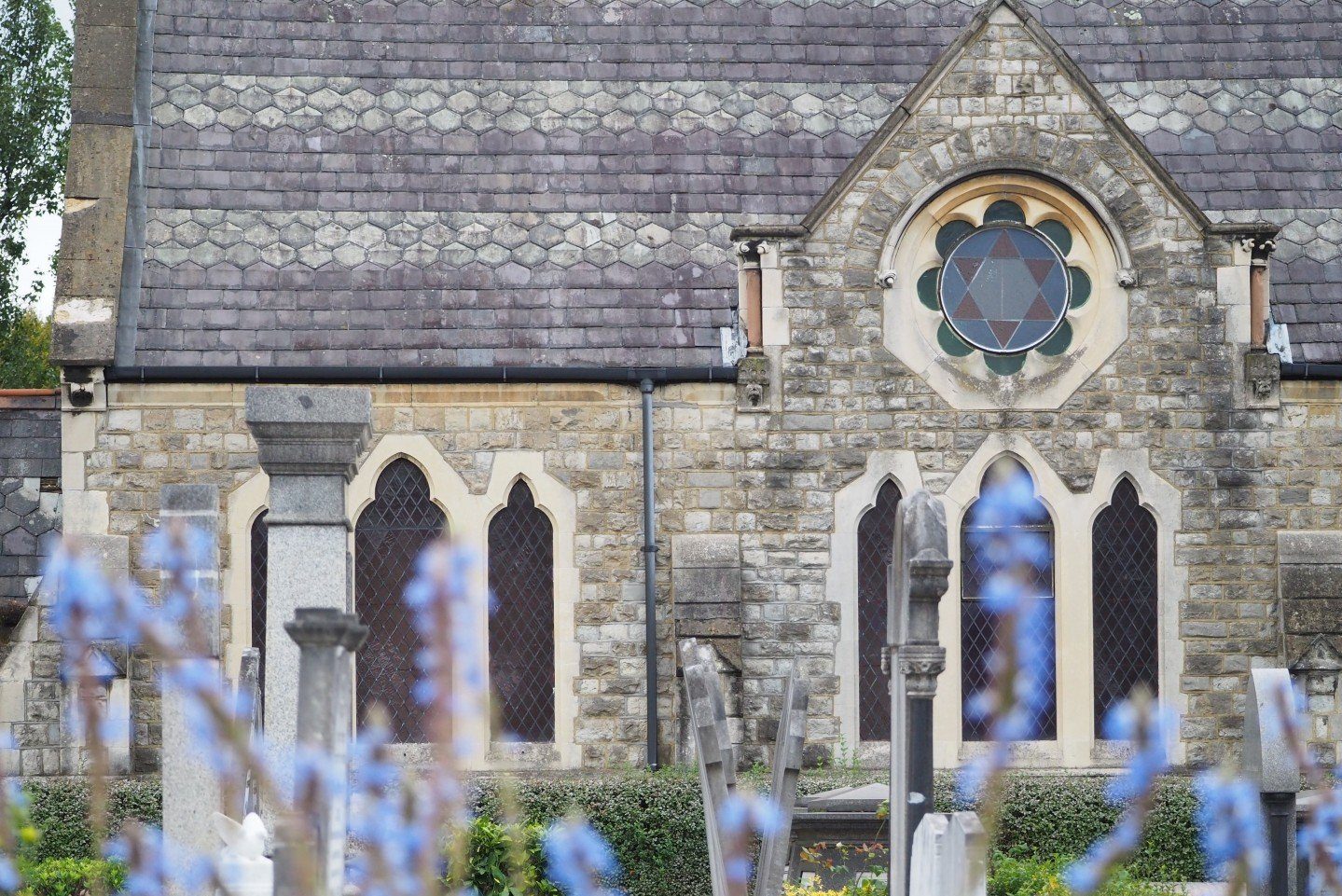 The Visitor Centre, now known as the House of Life, has been recently refurbished and is really welcoming.

They have also introduced some interactive elements which help explain a little more about the people buried here and their legacy.

It’s free to visit and there’s no need to pre-book. The Cemetery is open Monday-Thursday 10am-1pm and also Sunday 10am-4pm. Find out more here.