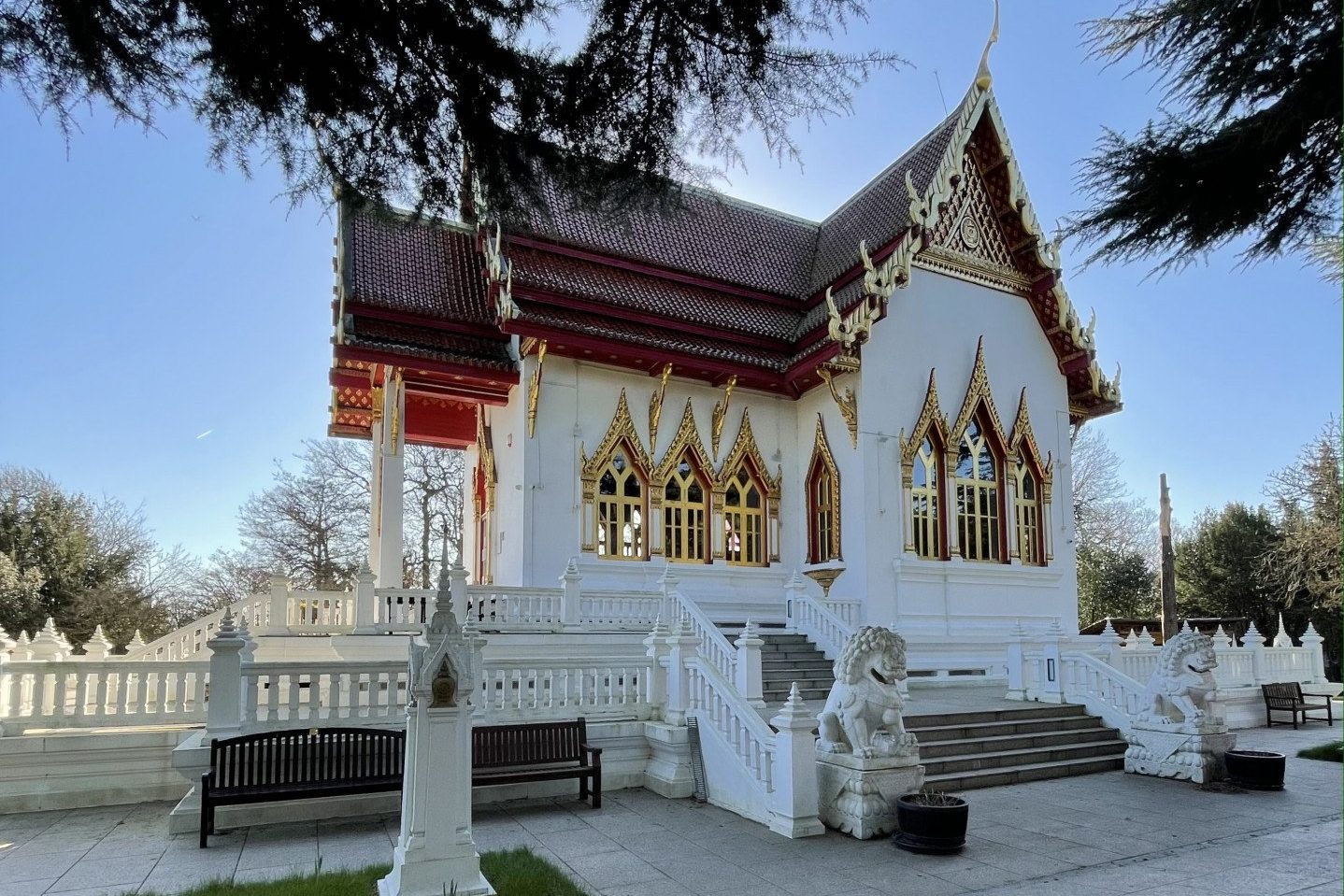 Climbing the steep hills up towards Wimbledon Village provides ample reward. Not only are you treated with an epic view back across London from Marryat Road, but you can also visit an enchanting Buddhist Temple.

The Wat (temple) in Wimbledon was built for and by the Thai Buddhist Community, the first of its kind in the UK. Established in 1965, the community of Thai Buddhist monks and nuns was first based in East Sheen and then moved into Barrogil House.

Built 1920s and set within a large garden space this became the main residence and offices for the monastery. You can see an earlier image from Merton Council website here.

Buddhism in the UK

Despite a long history of trade links with India and empirical expansion, it was only in 1879 that the first major written work about Buddhism appeared in England. The Light of Asia, published by Edwin Arnold, is an epic poem translating the life and teachings of Buddha and was an instant success.

Historic England counts 188 Buddhist buildings in the UK, each with their own distinctive style, and the Wimbledon Buddhapadipa is no different.

Building a Buddhist Temple in Wimbledon

Building work on the temple and shrine started in 1979 and it was completed in 1982. The architect was Praves Limparangsi (1930-2018) a renowned Thai architect, named by the Thai Culture Ministry as National Artists for Architecture in 1989.

Funding was provided by the Thai Government and the main building is known as the Uposatha. Inside is a small, open space where anyone is welcome to sit in quiet meditation. The interior is covered with rich murals surrounding a series of Buddha rupa (statues).

There’s no photography inside this wonderful space, but you can see a permitted image from Historic England on Google Arts and Culture here.

According to the Building Buddhism blog, the black bronze principal Buddha statue (the tallest at the back) was donated by the Thai Government and is between 600-800 years old!

The murals themselves are and extraordinary piece of artwork, painted by 26 young Thai artists between 1984-1992 and interweave the Buddha’s life story with contemporary world events and figures (Margaret Thatcher and Ronald Regan) as well as subtle pop-culture references (even a teenage mutant ninja turtle!)

The surrounding grounds are also worth exploring, although the Winter season meant it perhaps wasn’t as blooming as in Summer, the water feature and pathways create a peaceful space and scattered throughout are panels with quotes from the Dhammapada (collection of verses and teachings from Buddha).

Wisdom springs from meditation; without meditation wisdom wanes. Having known these two paths of progress and decline, let a man so conduct himself that his wisdom may increase.”

As well as serving the small monastic community of Thai monks living here, the Buddhapadipa provides a sacred space for Buddhists to worship and acts as a centre for the Thai Buddhist community. One of their aims is also to promote Buddhism to a Western audience and so visitors are welcome daily (9am-5.30pm) although the uposatha is only open at the weekends or by special appointment during the week.

The address is 14 Calonne Rd, London SW19 5HJ. It’s around a 25 minute walk from Wimbledon Station. Their official website can be visited here.